Filipino Fruit Salad: Virtue in a Can 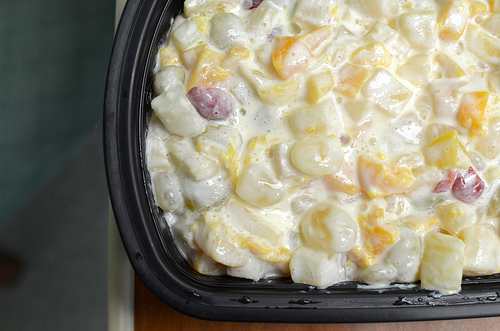 Mind you, that’s not me talking, that’s the ‘Voice of the world’.

Because I know better.

I know that virtue can be earned in a myriad of ways: fresh, frozen and canned.

Like everything else, they have their time and place, their season. 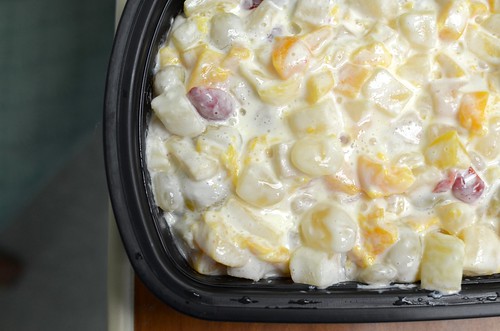 Take tinned pears, which resemble those poached– they make a fantastic French Pear cake that has you begging for more. 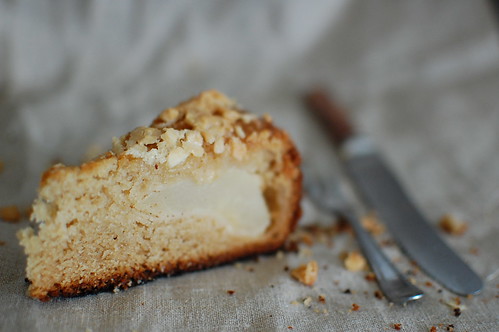 And canned palm nut cream – perfect for a Nigerian soup called ‘Banga’, made from cooked and pounded oil palm fruits. 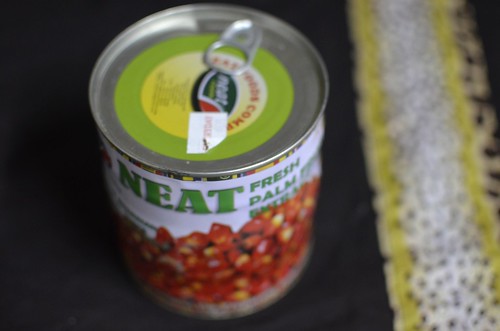 In the Philippines, fruit salads are popular party and holiday fare, usually made with buko, or young coconut, and condensed milk in addition to other canned or fresh fruit.

The day after I arrived in New York, my sister’s in-law made this salad for us. The same one who gave us cucumber fried eggs. I was completely taken in. Especially as it required no technique, no fancy ingredients, could be made ahead and tasted great, even days later. This is going in my dinner party repertoire.

Lets take the simple components one by one, as proof and evidence of why they should not be disdained: Tinned Fruit salad, Jarred Nata de coco, (Philadelphia) cream cheese and condensed milk.

I must confess that for many years, mandarin oranges were the only tinned fruit I loved. I would eat them from the tin, segment after segment. Till I discovered tinned pears. And now tinned fruit salad.

Ok, tinned fruit tastes nothing like the real fruit versions. I find the simple syrup it is canned in mellows out the true taste. But the texture is interesting. Soft, somewhat firm and colourful with the cherries that are canned with it.

To be called fruit cocktail, the American United States Department of Agriculture (USDA) stipulates that canned “fruit cocktail” must contain a certain percentage distribution of pears, grapes,cherries, peaches, and pineapples to be marketed as fruit cocktail. It must contain fruits in the following range of percentages:

The grapes make me smile the most – they remind me of ‘barely dressed’ gooseberries!

When served as an appetizer or as a dessert, a fruit salad is sometimes known as a fruit cocktail or fruit cup. 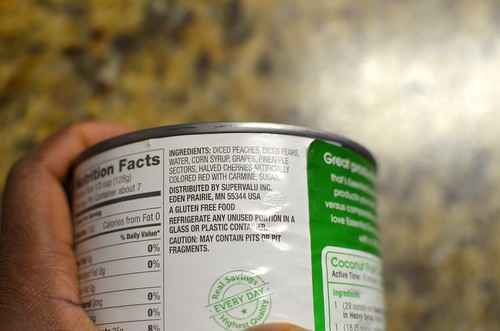 PS: Don’t look at the ‘artificially coloured’ cherries on the ingredients list!

I came across Nata de Coco, an Asian jellied coconut delicacy for the first time on Food Network’s Season 9 of  Chopped. Contestants had it in their dessert baskets, along with Kirby cucumbers, beignet mix and lemon lime soda.

It is a product that originated in the Philippines. It comes from fermented coconut water or milk, with added acidic bacteria, Acetobacter xylinus which causes a natural gelatinization. Think of translucent coconut cubes with floral overtones and a rubbery jellied texture that grows on you.

In The Philippines, it is served as a dessert or candy after adding a sweetener to it. It is also served as an accompaniment to pickles, soft drinks, ice-creams and fruit smoothies. It is considered to be an extremely nutritious product and a healthier alternative to tapioca.

I remember one of the contestants on Chopped, Dave, trying in vain to caramelise his nata de coco cubes with a blow torch, to no avail. The winner Matt, made a Poppy Seed Cake with Cucumber Compote, which if memory serves me right had the nata de coco in it.

I wondered about it and was thrilled to finally come up close and personal with it. I actually really like it.

Then while shopping at Kalustyan’s, I came across Nata de Piña, a similar product made with pineapples, instead of coconut water/milk. I currently own a jar. Just so you know. 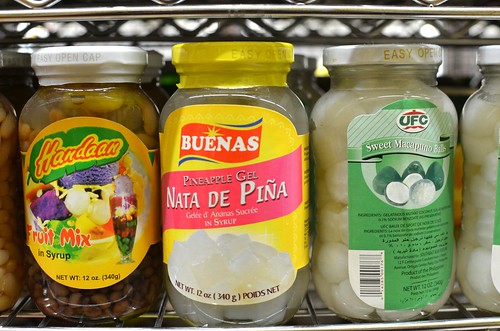 Cream cheese. The stuff that’s often slathered on bagels, of which Philadelphia is the most popular brand. The same that garnishes Red Velvet cakes, and thickens sauces. Yes, that cream cheese. Thick and creamy and slightly salty. It is an interesting addition to this salad. 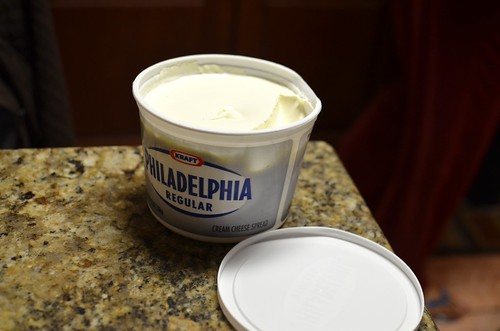 Condensed milk, according to Wikipedia is cow’s milk from which water has been removed. 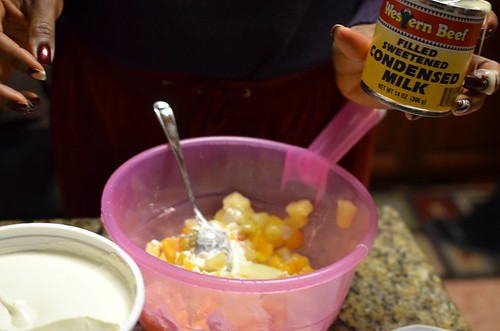 A related product is evaporated milk, which has undergone a more complex process and which is not sweetened.

Tip from Wikipedia: Condensed milk can be made from evaporated milk by mixing one measure of evaporated milk with one and a quarter measure of sugar in a saucepan, then heating and stirring the mixture until the sugar is completely dissolved, then cooling. It can be made by simmering regular milk until it is reduced by 60%, then adding sugar variations.

Filipino Fruit Salad is a creamy, tasty dessert made with many different kinds of canned and preserved fruits. It is a staple at many Filipino gatherings. My friend, Norma likens it to the Ambrosia salad.

Nata de coco and Nata de piña can be found in most Asian grocery stores. In New York, I’ve seen it at Kalustyan’s. 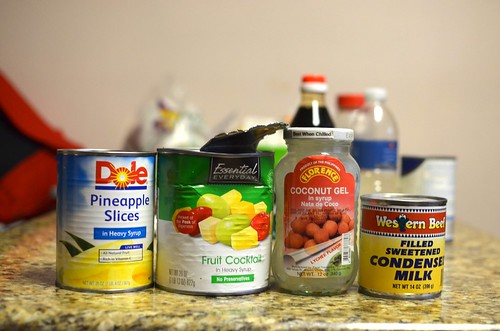 Drain the tin of fruit salad, the nata de coco and chopped pineapple in a colander and set aside. You want as much liquid as possible to drain away so it doesn’t water down the salad. Once drained, anywhere from half an hour to overnight, turn out into a large mixing bowl.

I’ve had it with palm nuts in syrup but they don’t give the same textural contrast the nata de coco does, that jellied chew. They are slightly crunchier and are still nice but I prefer the nata. 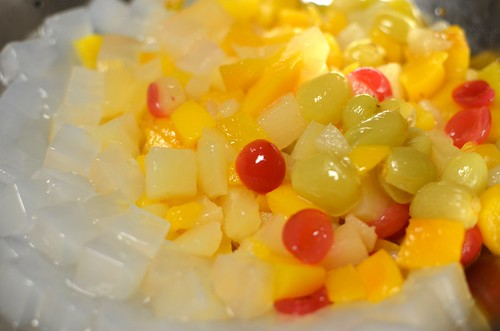 Stir the cream cheese to soften/loosen and then add it to the fruit mixture. 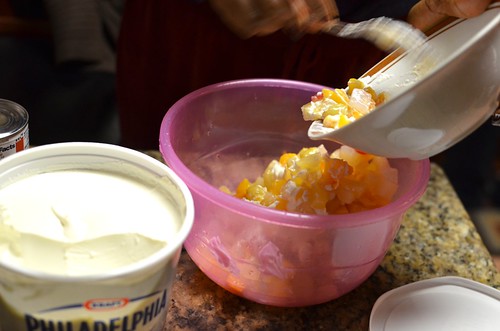 Drizzle in the sweetened condensed milk, stirring until all the fruit is coated in creamy white. 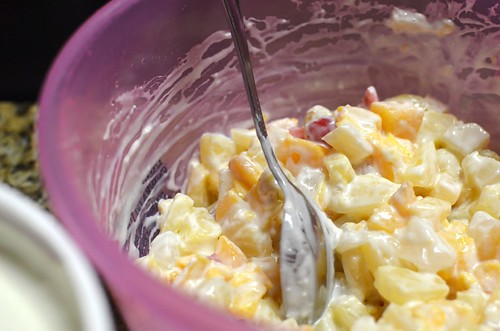 Best served cold. (At odds with waiting for the deliciousness!) 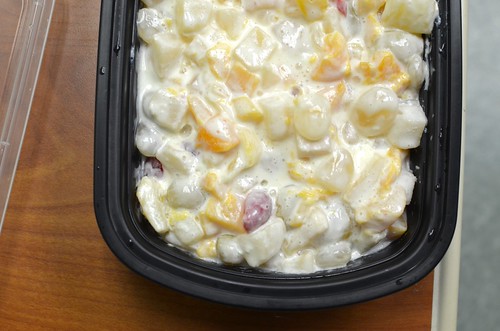 Interestingly it may not look like much, the fruit chunks may seem like they’ve been coated in mayonnaise but I bet you, one taste and you’ll think again. Reverse your negative thoughts. And seek more.

The salad is barely sweet, really creamy with the nata de coco providing some texture and delicious soft fruit. If you like it sweeter, add some more sweetened condensed milk. I’ve read of using other types of cream instead of the cream cheese but this is the version I know!

Fresh fruits such as diced apples, sliced bananas, or halved grapes may be added as well.

Most of all, I say serve this cold because the fruits firm up and take on a more interesting texture.

It reminds me a lot of the fruit salads we had growing up in our house. We always had fresh fruit salad, with diced tropical fruits – paw paw, pineapples, oranges and bananas. We always served it with vanilla ice-cream. And also, there was always jelly (Jell-O) which we cut up and had with evapourated milk. Like deconstructed milk jelly.

When I make this back at  home in Nigeria in a few weeks, or even on Christmas day, I would love to garnish it with red maraschino cherries on the stem – I think the bright colour would make a striking contrast.

I don’ think I’ll add any mandarin oranges. I would love to add chunks of apple even though I’m not sure they are necessary. I believe paw paw and melon bits/balls would be very nice as they are soft-textured and blossomy flavoured. But we’ll see. 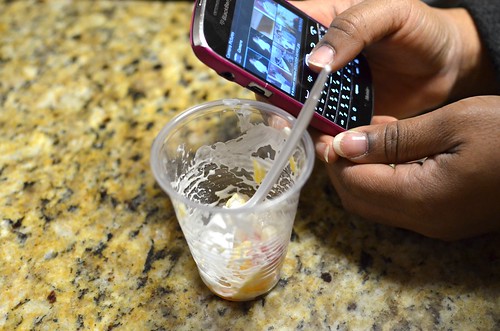 What’s your best food in a tin or jar, and your favourite recipe?

Passionate about food in its entirety – cooking, eating, dreaming, writing and photographing it. ‘Traveller, by plate’, using foodways – the social, cultural and economic practices relating to the production and consumption of food to explore Nigerian cuisine & the world for ‘food is more than eating’.
You might also like
DessertFruit salad recipesBakingRecipes