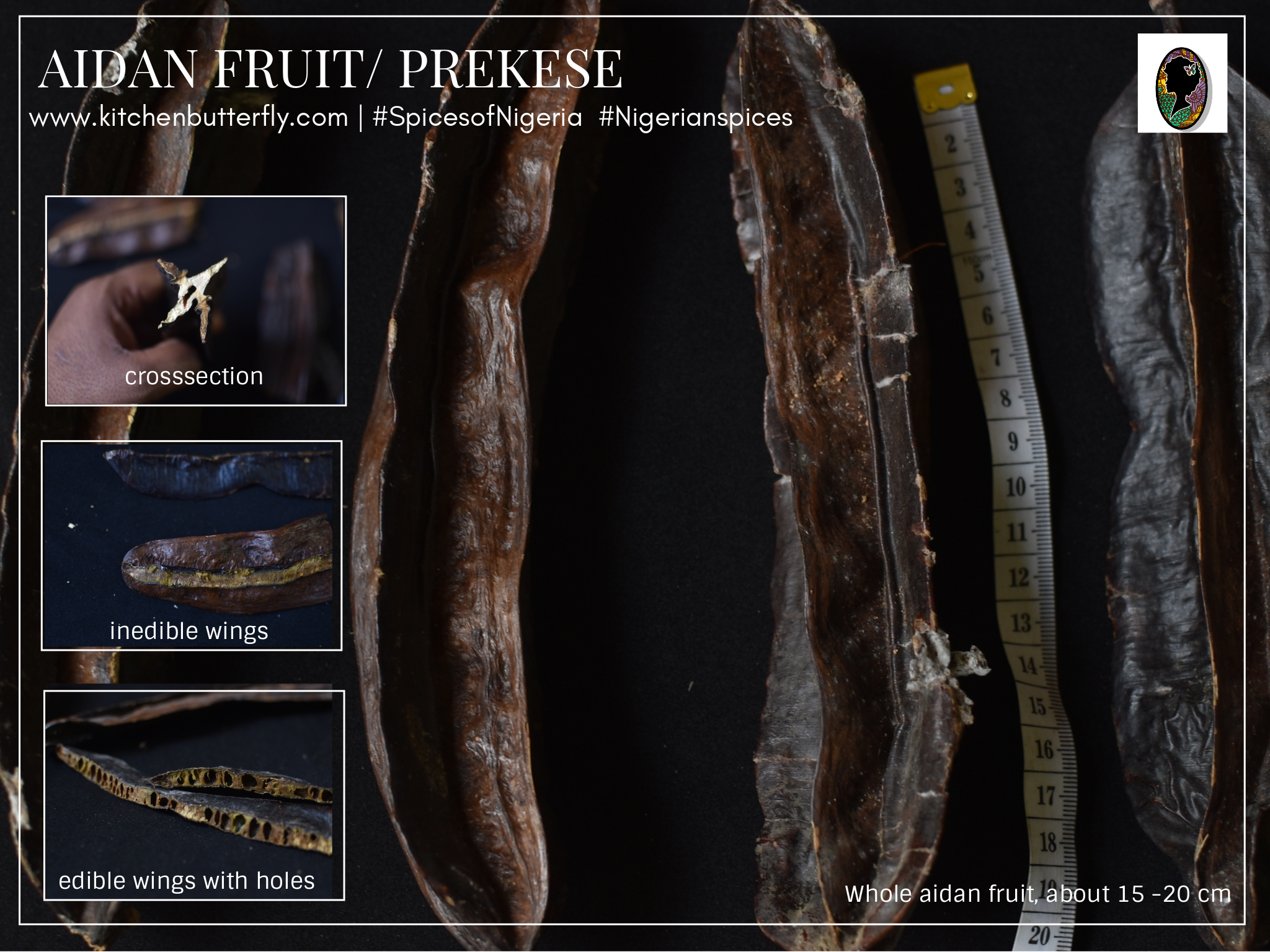 I’ve almost always used the dried version and so haven’t had the opportunity, till recently to truly get a whiff of the buttery, caramel, chocolate notes the aidan pod has trapped within it. A winged pod, with 2 hard, inedible and 2 soft, edible wings, it is a core ingredient in my mother’s pepper soup. 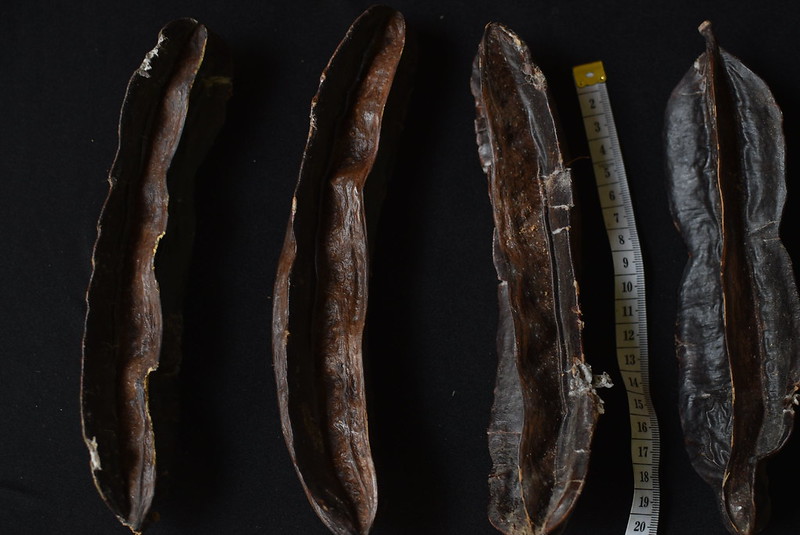 I’ve encountered it in delightful chocolate by Midunu, but that’s all – apart from p soup of course.

The first time I cut into it, my son and daughter exclaimed. Within seconds, they’d identified caramel, brown butter, chocolate, toffee. That’s how strong the aromatics are. The second thing though, when drawn-in to taste is just how bitter it is. For something that smells so sweet! All part of the plan, baby.

Studies have it that Tetrapleura Tetraptera (Tetra, meaning 4), of the family Tetrapleura in the Fabaceae/ bean family, is rich in many things.

Studies have found that T. tetraptera fruit is a reservoir of medicinal phytochemicals with wide range of potential application [21, 17]. For instance, it has been reported that the pulp of dried fruits contains about 1 to 20 % of saponins, 2.5 % of flavonoids, 0.12 % of tannins, 1 % alkaloids 5 % phytates, and 5–11.36 % of fibers [17], among which flavanoids and saponins, fibers, and at a lesser extent phytates are well known for at least one of the following antidiabetic, anti-inflammatory, antioxidant and anti-obesity properties [5, 7, 51]. Of note, Fleischer et al. [54] have recently isolated three flavonoids from the fruits of Tetrapleura tetraptera, which were the first reported isolation of such constituents from the genus Tetrapleura. In addition, the isolated flavonoids have demonstrated various biological activities. For Instance, 2’, 4’, 4-tetrahydroxychalcone (butein) has been shown to be a potent antioxidant and an anti-inflammatory agent [55]. Secondly, 2’,4,4’-trihy-droxychacone (Isoliquiritigenin) has exhibited vasorelaxant effect on the phenylephrine-precontracted rat aorta [56], aldose reductase inhibiting property [57] and is also a potent anti-tumor and anti-inflammatory agent [58]. The third isolated compound 4’, 5, 7-trihydroxy-flavanone (Naringenin) has been reported to lower plasma cholesterol in vivo [59] and also has antioxidant and blood glucose lowering activities [60]. Therefore the presence of these constituents in the fruit of T. Tetraptera could have contributed to the observed antioxidant, anti-inflammatory, hypolipidemic, hypoglycaemic and hypotensive effects of the extract in our study; Source – Lipids Health Dis

It is also aridan in Yoruba; dawo in Hausa; seghe-seghe in Bini; osshosho, Igbo; uyayak in Ibibio. In Cameroun, it’s called ‘4 corners’, and in Ghana, prekese.

Dark and slightly curved, about 15 – 20cm in length, each pod sports 4 ridges – 2 are hard and woody and inedible, and 2 are soft and fragrant, filled with a sticky sweet sugary pulp with all the warm flavours of brown butter, toffee and chocolate.  At the centre of it, there are dark beans – rarely eaten.

Uncultivated, it grows green on trees then turns a shade of brown. It is in this form it is picked, (dried) and sold.

The flowers grow on short stem stems at the end of the branches. They grow in pairs. The flowering period is from February to early April. The pods develop in the following months and ripen from September to December. They are 15 to 25 cm long and shiny, purple brown. They contain 8 mm large black seeds. The pod remains closed, even when fully matured; Source: S. Translated from Dutch

Both whole pods and dried have their uses.I prefer the freshness of flavour and aroma from the whole pod and I would advise getting that over the dried.

The pulp in the soft, edible wings is at its fullest flavour and aroma when dried/ somewhat fermented. I encountered some wings with ‘green, fresh pulp’. 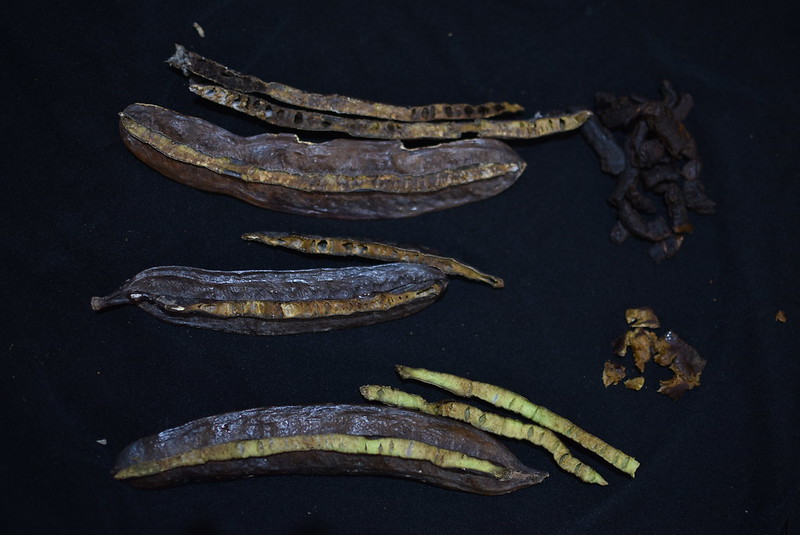 Compared to the dried , darker brown pulp in the wings, it had a lot more moisture and a more ‘green’/ vegetal/ grassy aroma with a muted flavour profile, nowhere as developed as the old, darker, riper pods. 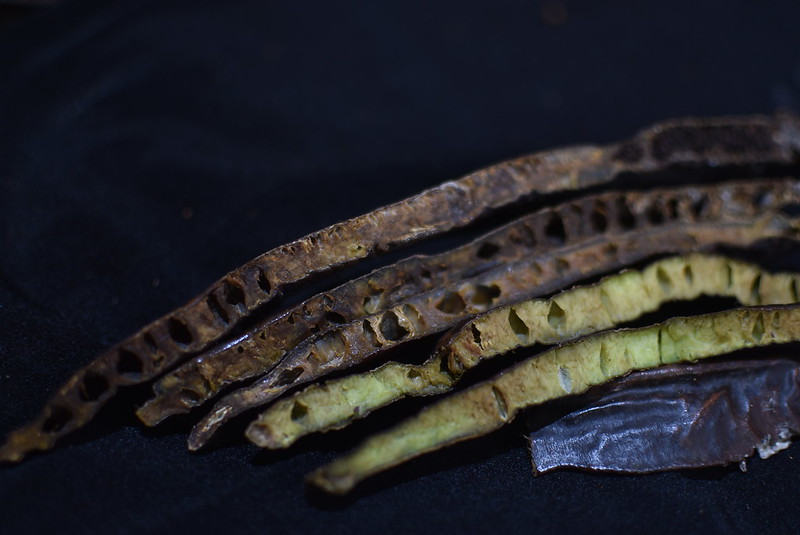 Of all three ‘types’ I encountered – fresh green on pod, dried brown on pod and dark brown extracted pulp – the extracted pulp had the most pronounced flavour. 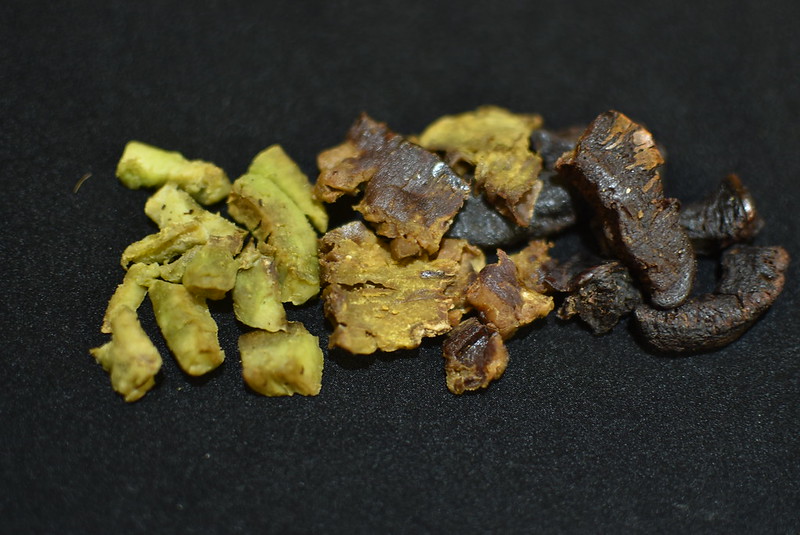 Here’s how to prep it:

Wash before you use.

Look at the pod – the darker, softer wings are the edible parts you want. Cut them off using a sharp knife. The inedible parts are hard and woody. If you shake the pod, you’ll hear seeds lose/ lost inside 🙂 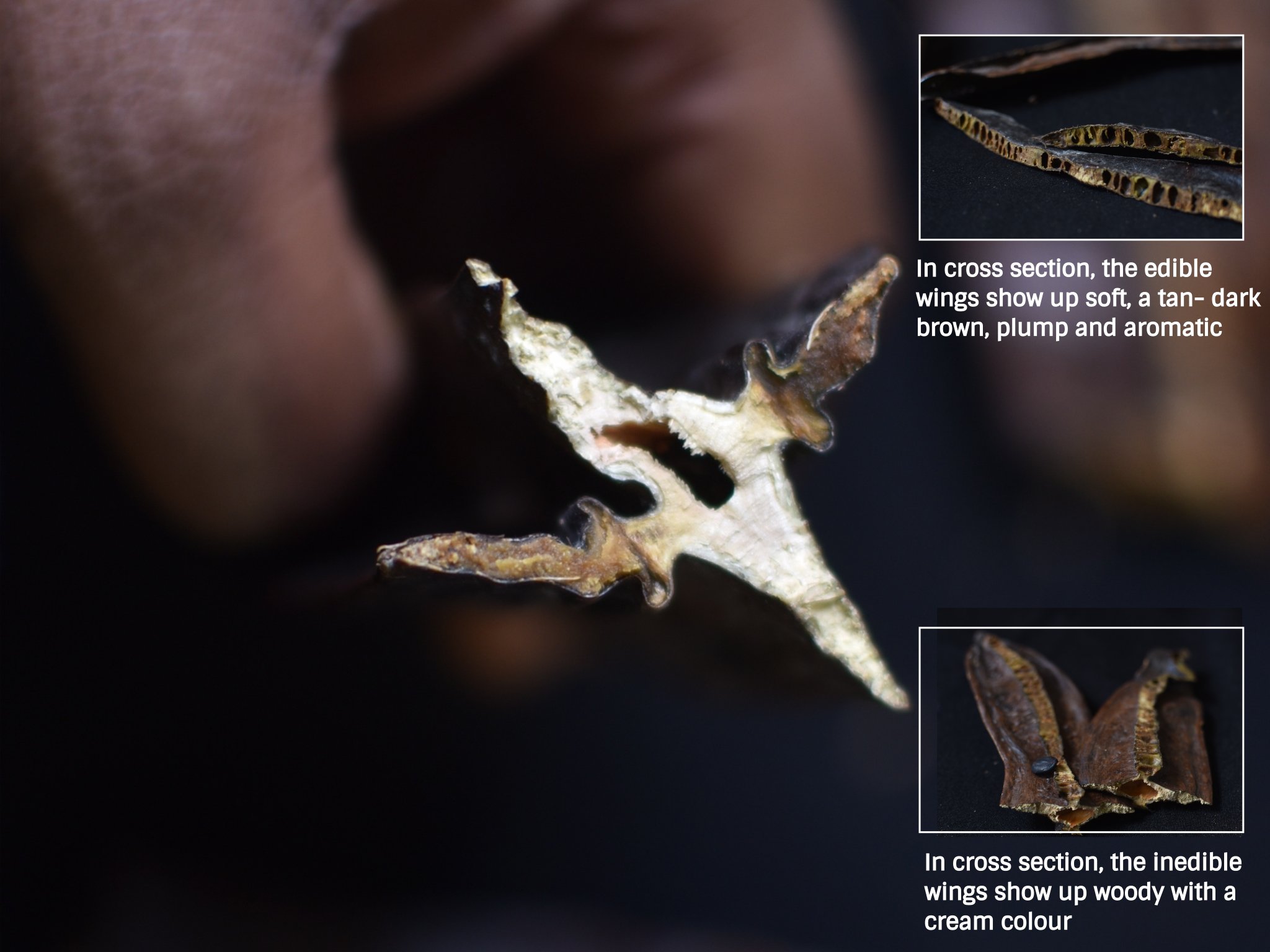 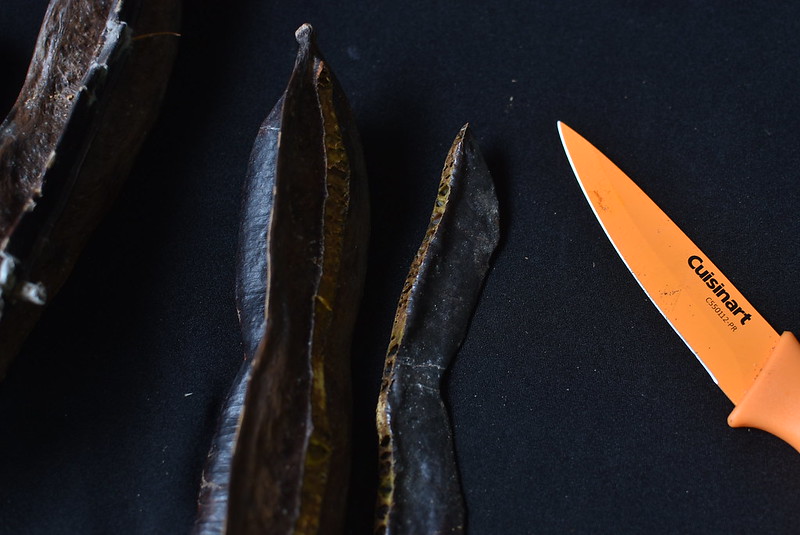 It is an oily spice – really aromatic. Toast lightlly and use as desired – blended/ food processed/ grated. I have dreams of smoking it and then incorporating that into various preparations.

I imagine this made into a syrup for pancakes, the essence coaxed out, sweet and warm in a gingerbread type cake where molasses and honey might do the work of sweetening. There are ideas, I dare say – many. 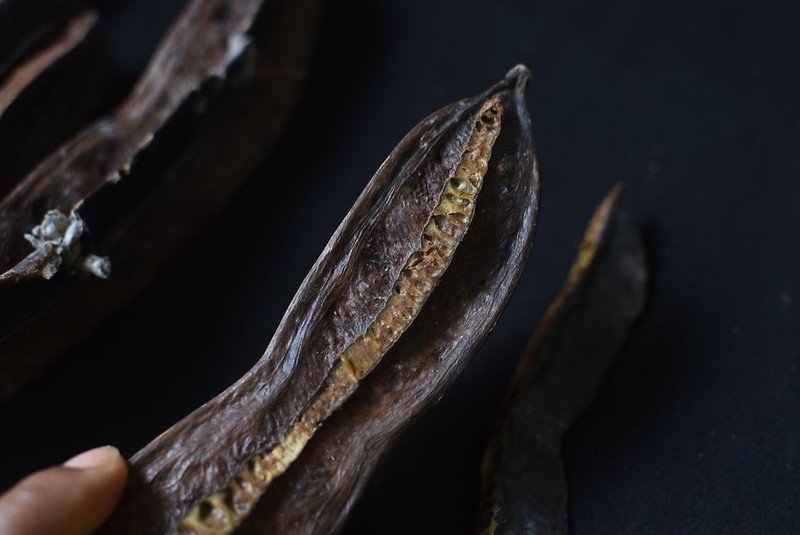 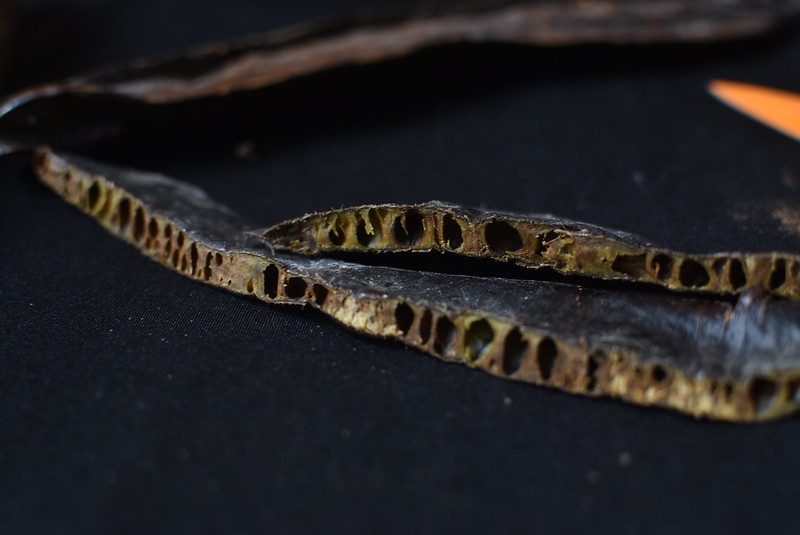 Some popular uses are:

How do you use it? What ideas do  you have? Have you experienced the heady aroma of the fresh version?