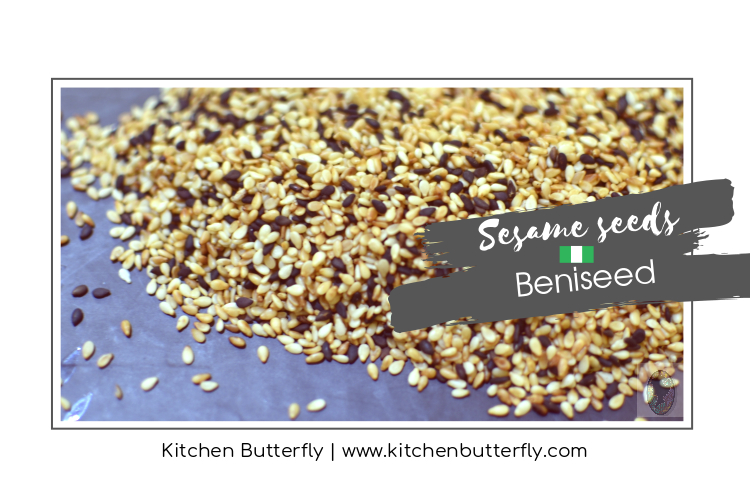 Because beniseed [sesame] seeds have their DNA and birthplace in Africa. In this post, I use beniseed, benne and sesame seed interchangeably – forgive me. 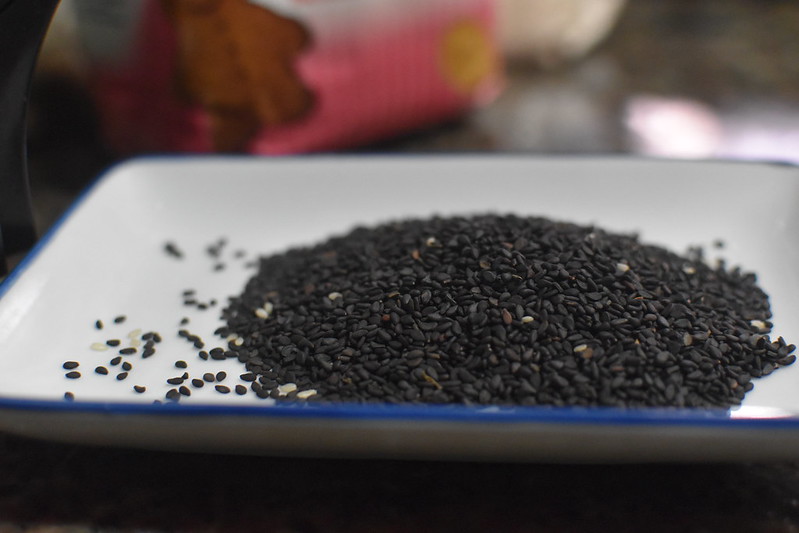 Sesame seeds are the seeds of the tropical annual Sesamum indicum. The species has a long history of cultivation – first for its rich oil but also for wine!

The English term sesame traces back to the Arabic simsim, Coptic semsem, and and early Egyptian semsent (the latter being listed in the Ebers Papyrus, a 65-feet-long scroll listing ancient herbs and spices discovered by the famous German Egyptologist, Ebers).

The earliest recorded use of a spice – sesame seed – comes from an Assyrian myth which claims that the gods drank sesame wine the night before they created the earth; Source – The Spruce

In Nigeria, where it is also known as beniseed (benneseed), it has been cultivated for a long time. In the Northeast, it features in some cultures and traditions, for health and prosperity.

In the central and northern parts as a minor crop cash crop till 1974 when it became a major cash crop in many Northern States e.g. Benue, Kogi, Gombe, Jigawa, Kano, Nasarawa, Katsina, Plateau, Yobe and Federal capital Territory.

In 1977, The Nigerian Produce Marketing Company Limited and all the States Marketing Boards which existed were dissolved and their activities transferred to six new Commodity Boards covering food and export crops and governed by the Commodity Boards Act (1977).

The overall purpose of the Commodity boards was to manage the production, quality assurance and distribution of food crops. In this dispensation, the management of beniseed came under the Nigerian Groundnut Board which managed

When I was younger and in school in the UK, I would buy sesame snaps – small, dense rectangular ‘cakes’, heavy with sugar, honey and toasted sesame seeds. And then, a few years ago, one of my best ever neighbours, Femi brought me some Ribi [sic], made in the north of Nigeria. They were similar to the sesame snaps of my youth but incredibly light and beautifully crunchy. 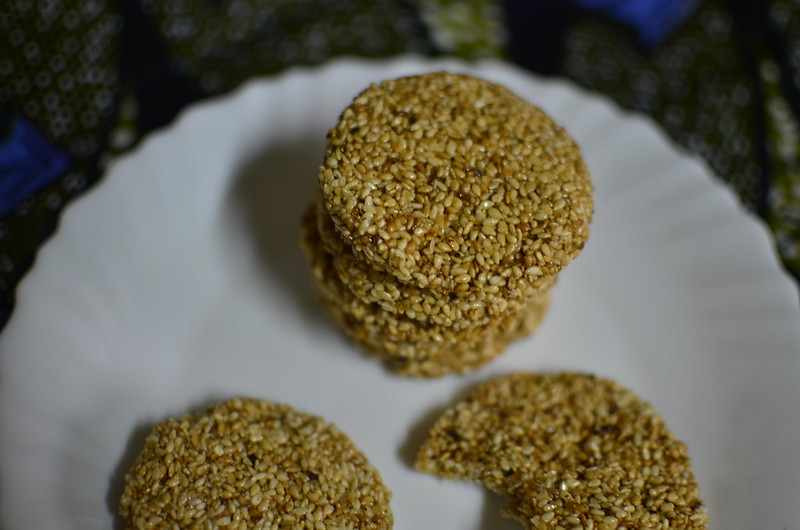 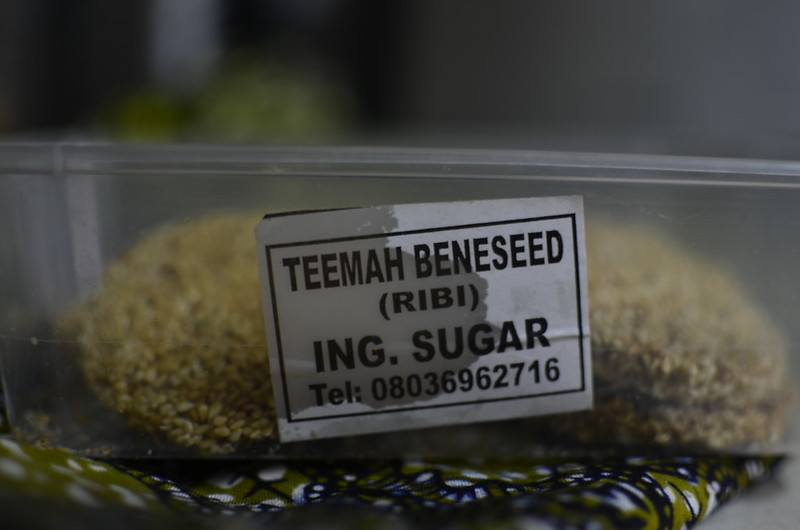 Interestingly too, research into foodways shows that a benne wafer exists in the American South and seems to have travelled that route – much like Acaraje – by slave trade and the enslaved.

Some sources say the enslave brought handfuls of benne seeds with them for health and good luck. Just as the Bura people of Northeastern Nigeria do with beniseed, the enslaved did, some indication that these seeds have a multi-century history with strong ties to Nigeria, Africa.

Anson Mills, an American group ‘grow and mill Carolina Gold rice and a full complement of heirloom grains adopted by Antebellum rice families, and to follow the sustainable rice-crop rotation.’ They also explore other crops of which the sesame, benne is one of them.

Apparently, the growth of benne enriched the soil quality moving the crop from kitchen gardens to ‘plantation/ commodity’ growth.

Their history has it that ‘Slaves brought benne seeds from Africa to the Carolina Sea Islands in the early 18th century and cultivated them in hidden gardens for nearly a century as a staple food seed for rice cookery. By the time of our Revolution, benne seeds and their oil had earned a place at table in the Big House, and benne became the focus of intense Antebellum market farming. Slaves and masters alike consumed the plant at every growth stage, from the tender young leaves to the petite seed pods similar to okra, and, later in the growing season, the mature dried seeds we know as sesame. When heated in cooking, Anson Mills new crop benne seeds possess lovely field flavors, a characteristic nuttiness, and deep burnt-honey notes. Unlike modern sesame seeds, our benne asserts its culinary presence by magnifying umami nuances in foods, making it unparalleled for use in both modern and historic recipes’; Source – Anson Mills

The Gullah of Carolina and the American South make a benne wafer, likely the offspring of Ridi. The Gourmet Cookie Book: The Single Best Recipe from Each Year 1941-2009 voted the benne wafer the top cookie of 1954.

Preparing for Christmas, Gourmet’s editors in 1954] suggested a few mail-order gifts. These included: 6 live Maine lobsters, packed in seaweed and shipped in a free kettle ($9.92); a brace of Texas pheasants ($9); three 2-foot-long Louisiana sugarcanes ($1.19); a dozen sweet, stringless Colorado Pascal celery stalks “in a gay box” ($5.75); 3 Cornish pullets from the Danish humorist and musician Victor Borge, who bragged that his birds ate better than he did ($12.50); and 8 dozen fresh Long Island oysters in the shell ($5.50). If you wanted to offer your friends sweet benne wafers from South Carolina however, the only option was to make them yourself. A tin of the thin, chewy, caramelized sesame-seed cookies (“benne” is an African word for “sesame”), with their stark nutty goodness, is a truly wonderful gift; Source – Food52

Unlike Ridi and sesame snaps which are similar to sesame brittles/ candy/ , the benne wafer is a cookie in every sense of the word – butter, sugar, flour and sesame seeds, as opposed to the two, three-ingredient Ridi/ snaps. The Gourmet recipe is spread like a tuile, others feature the teaspoon drop.

In Nigeria, the seeds are incorporated in drinks like Kunun gyada – a creamy drink made with rice, groundnuts and sometimes sesame seeds. They also go into soups, to make the candy/ brittle – Ridi or Kantun Ridi in full. Sometimes, the oil is extracted and the resulting seed meal is pressed into a cake that can be broken and incorporated into soups and stews.

These recipes also exist across the Atlantic.

I’ve also seen a few recipes from Charleston where they are served savoury style with dips. The ideas this is giving me….I cannot wait to try.

Bene Wafers are thin crackers made with sesame seeds and served as an appetizer with dips at Charleston cocktail parties and receptions. They are especially good with Pimento Cheese. Source – Chef Rick.

That the famous phrase – ‘Open Sesame’ from Arabian Nights comes from sesame plants? Because the plant pods – much like water leaf – pop and burst forth when ripe? Great for the propagation and spread of their species but not for those who farm it 🙂 so, the seeds are often harvested (by hand) before they are fully ripe.

So, yeah – just to share some of what I know about sesame seeds. Next post? Black sesame seed puff puff because yum.