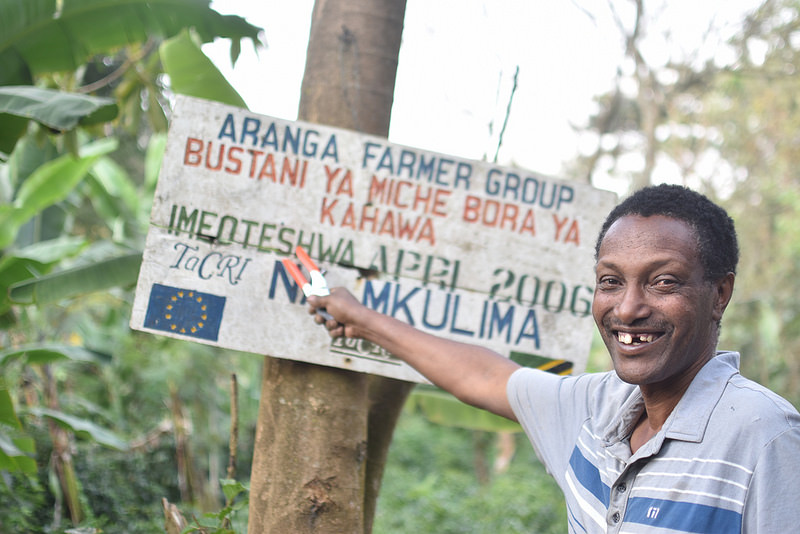 I am a gradual learner. In the case of coffee, I’ve progressed from instant to cold brew from grounds. Next step? Buying a cafetière and grinding my own beans because I’m now an aficionado :). After all, do you know all the things I do about coffee? No? Well, grab a cup let me tell you more.

The very first time I encountered coffee beans, I was shocked to see their green colour. It hadn’t occured to me that the dark brown colour came from roasting. That was a decade or so ago so don’t dare give me the eye or lip :)! That was my first introdution to the art of coffee beyond Nescafe’s Gold Blend jar.

And then a few weeks ago I was in the gorgeous mountain country of Arusha, Tanzania for #TEDGlobal2017. After the conference, I spent a few days exploring the region close to Kilimanjaro. That included a visit to the Arusha National Park, the Kikuletwa hot springs which was special as we drove through this desert-land of Baobab trees and a visit to a coffee farm in Aranga-Arusha. 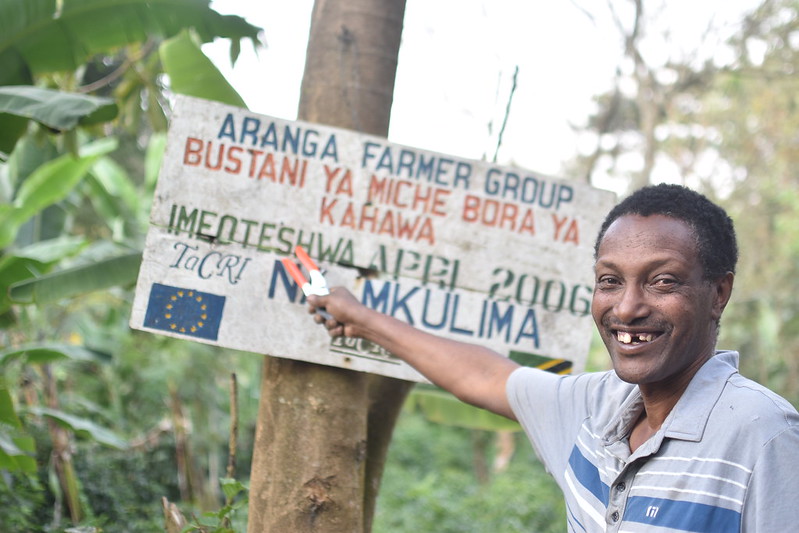 Coffee is Tanzania’s largest export crop, accounting for up to 40,000 metric tons annually, of which 70% is Arabica and the rest, Robusta. In the northern regions, around Mount Meru and Kilimanjaro, the Arabica plants thrive on the rich volcanic soils at altitudes of 1400 – 1800 metres above sea level.

The Aranga farmers live on the slopes of Mt. Meru in northern Tanzania. The fertile, volcanic soil provides the ideal environment for growing the fragile Arabica plants without much artificial intervention. The Aranga group was formed by 10 farmers who broke away from a mismanaged cooperative to establish a more democratic group and focus on quality upgrading; Source: This Side Up.

I learnt so much about coffee, and I’ll start right at the very beginning. Coffee and Tea came to Tanzania via German and British colonists, respectively in the 19th century. First coffee with the Germans from Ethiopia and then Tea with the British. Those early coffee trees have ended up vulnerable to a particular leaf rot which triggered exploration of growing organic coffee. 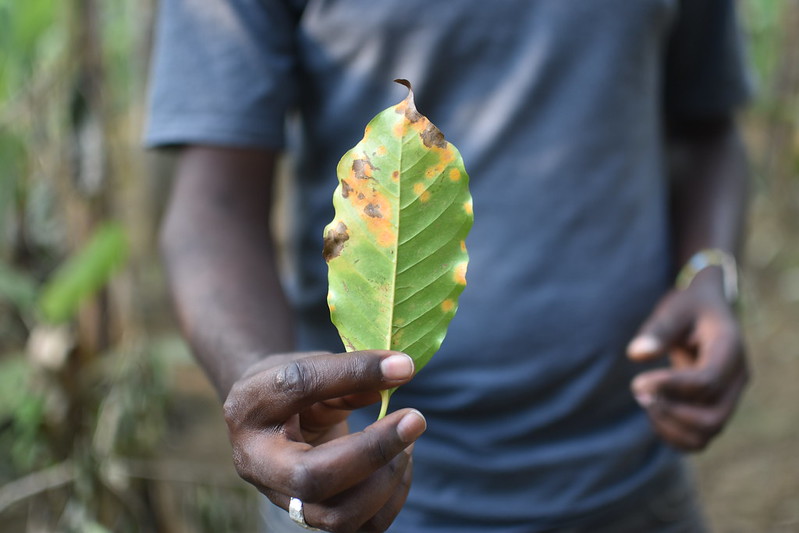 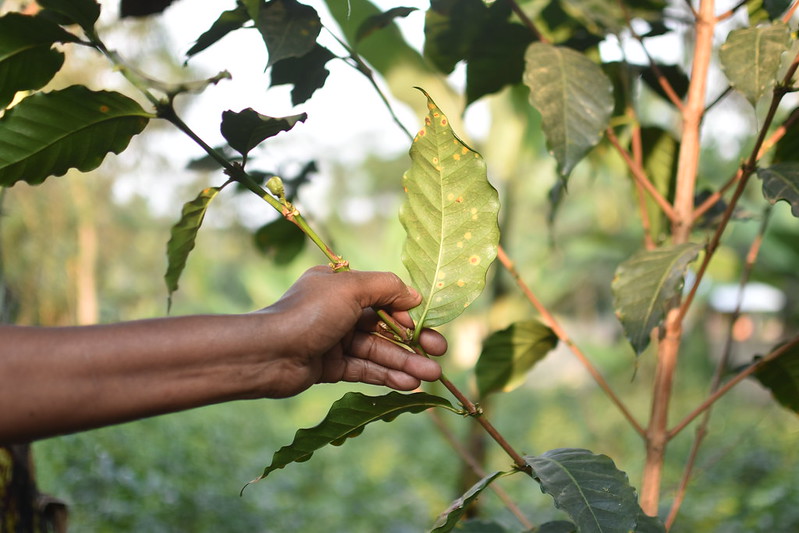 Many farmers in a concerted effort by the Tanzanian government, were given the opportunity to learn about organic coffee farming. At the Tanzania coffee research institute, they were taught about planting, pruning, growing and caring for these trees.

Many of the farmers in the Aranga Coffee Group are replacing their old trees with new trees. The new trees they are planting are a special new variety developed by TACRI, Tanzania coffee research institute. These trees are developed for our area and are more resistant against plant diseases than the old trees. This is very good for the farmers so they don’t need to use any artificial pesticides on the trees anymore. This is not only cheaper for the farmers, but it also makes it much easier for them to work with organic farming; Source – Kahawa 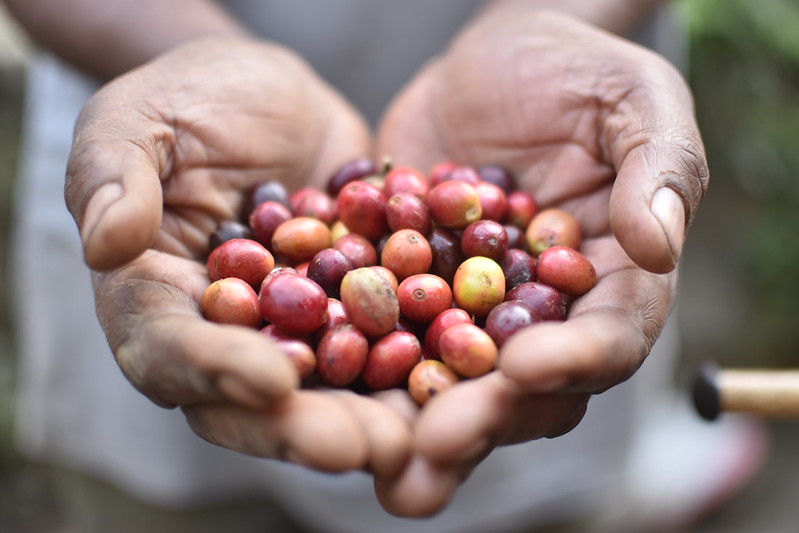 The process of organic coffee growth and production begins like this:

Coffee plants are grafted – leaves are trimmed, stems cut and set in a nursery of sorts. 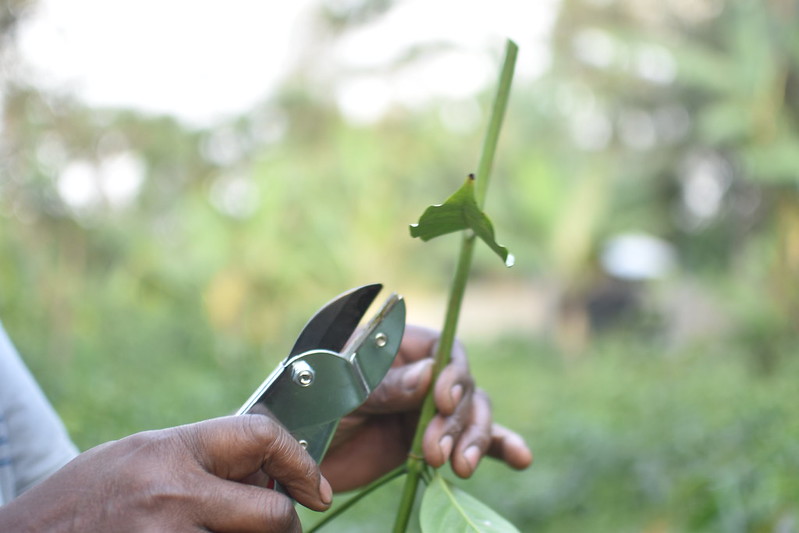 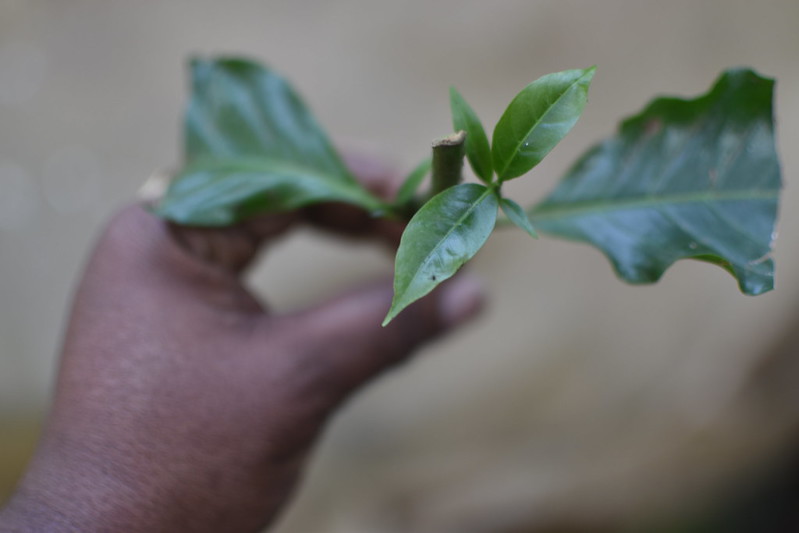 In the nursery, they are grow under a covering of thick plastic, for about 9 months. The same amount of time it takes for most babies to be born :). 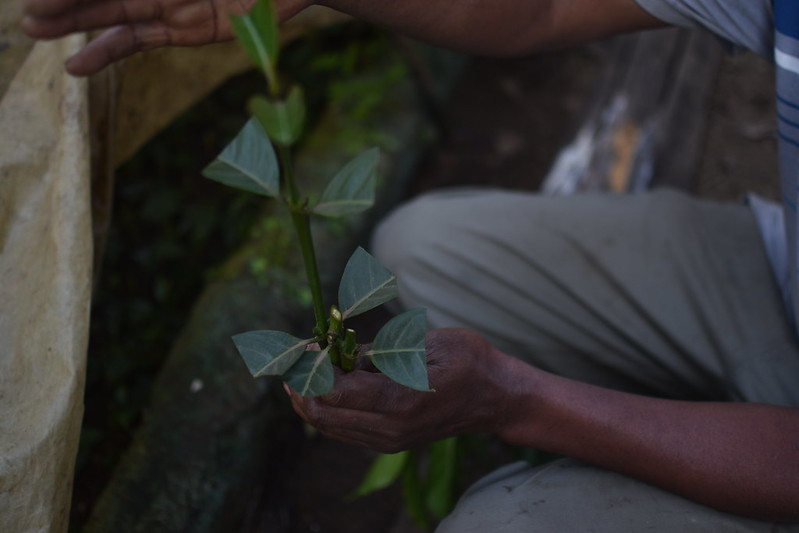 An unprocessed coffee bean is actually a seed. If you plant it in the ground it will grow into a coffee tree. But to maintain the plants genetic resistance against diseases, the farmers cut branches of the trees and plant them in a protected nursery. The young plants stay in the nursery for 9 months until their roots are strong enough to withstand the elements. Creating the right conditions for coffee trees is not an easy task. They need shade, nutrition and must be pruned carefully in order to give a rich harvest; Source – Wild Tracks 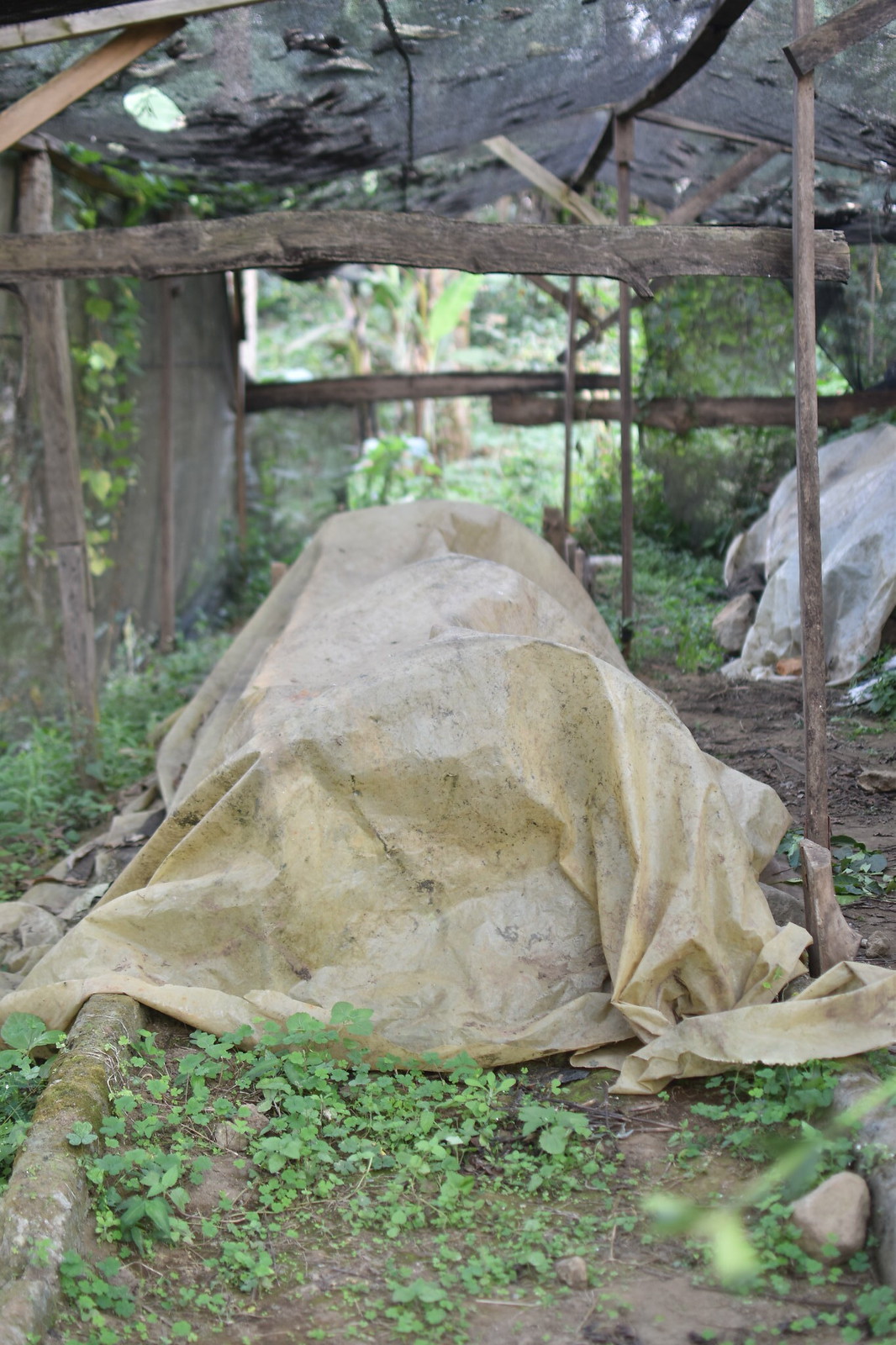 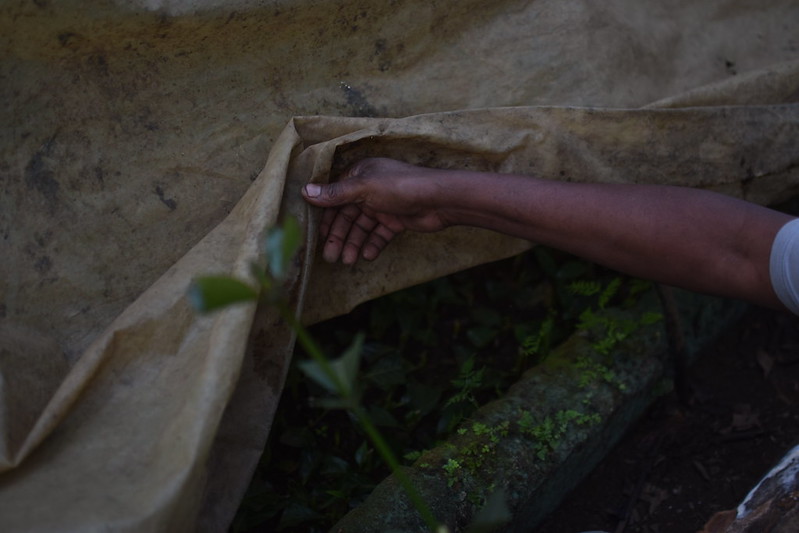 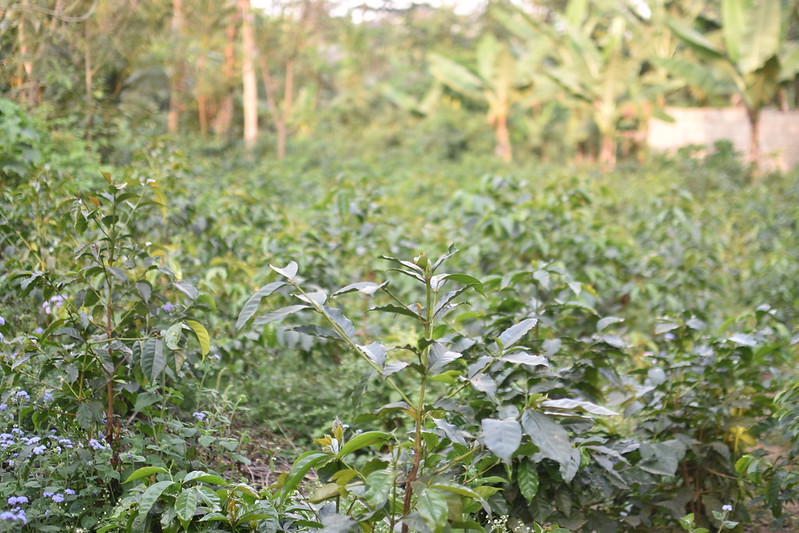 The trees grow and the berries begin to form, first green and then when ripe – red. I visited a local coffee farm where organic coffee trees are planted. Mr Gideon – like his father before him – is a coffee planter and he led me round his farm, spread out far beyond the slope of his modest bungalow. He keeps cows, who too benefit from the coffee in a way – but I’ll come to that. He learned about coffee in the Tanzanian Coffee Institute and is now part of the Aranga coffee group. 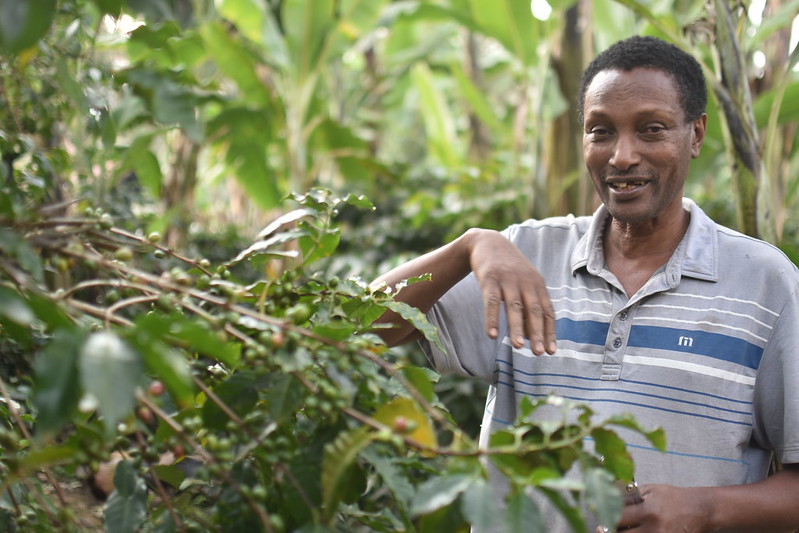 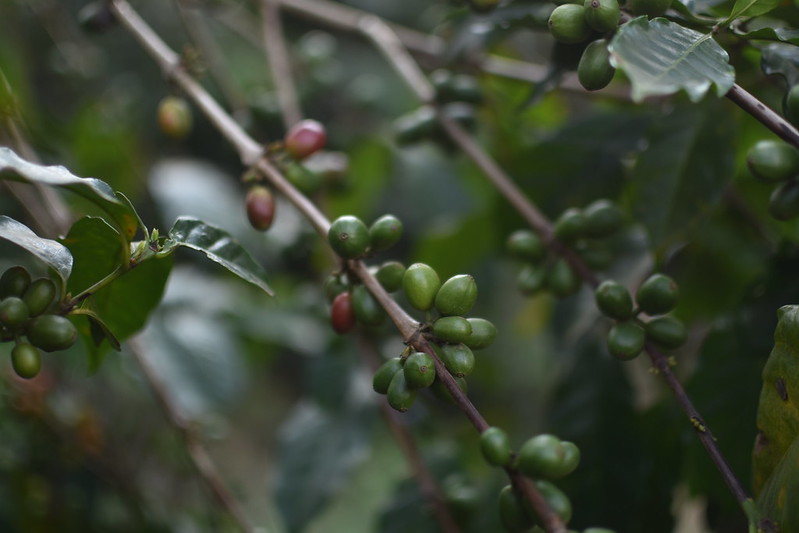 His green garden has coffee plants of varying ages. On the periphery and as a hedge are plants like Neem which provide indigenous, organic, non-harmful protection against plant diseases.

Once the coffee beans are ripe, they are picked. 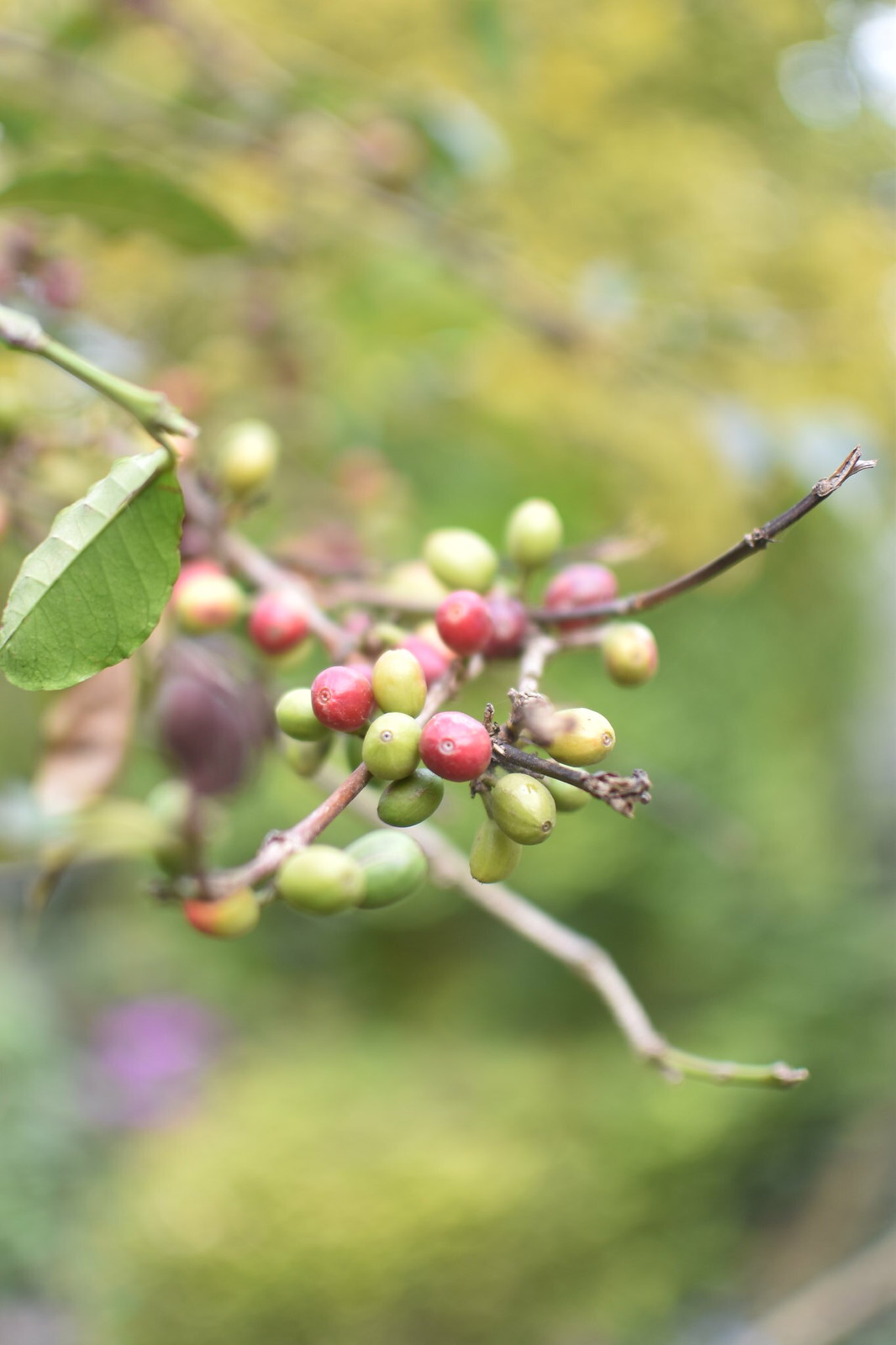 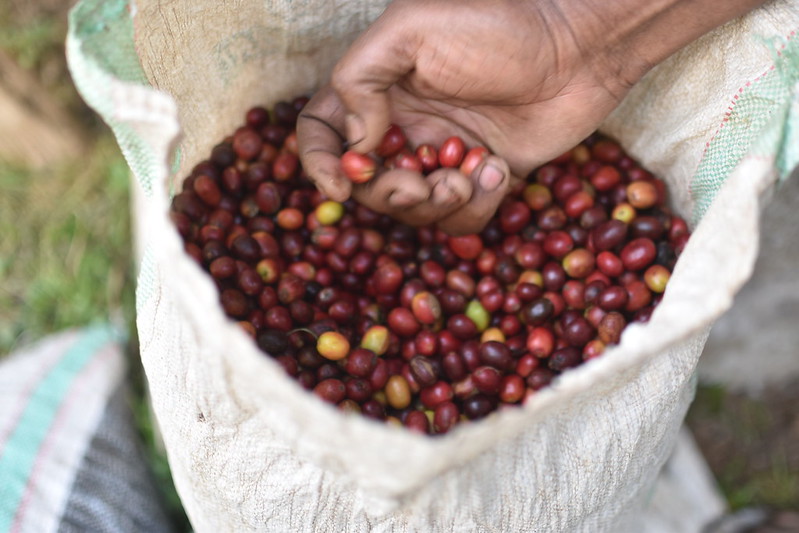 Using a simple pulping machine – with rollers and manually operated, the berries are pulped to extract the coffee beans.

Mr Gideon has two sorts of machines – one manually operated which was his father’s before him, from the 1950s and a modern one – China made and powered by a small generator. Both function the same. 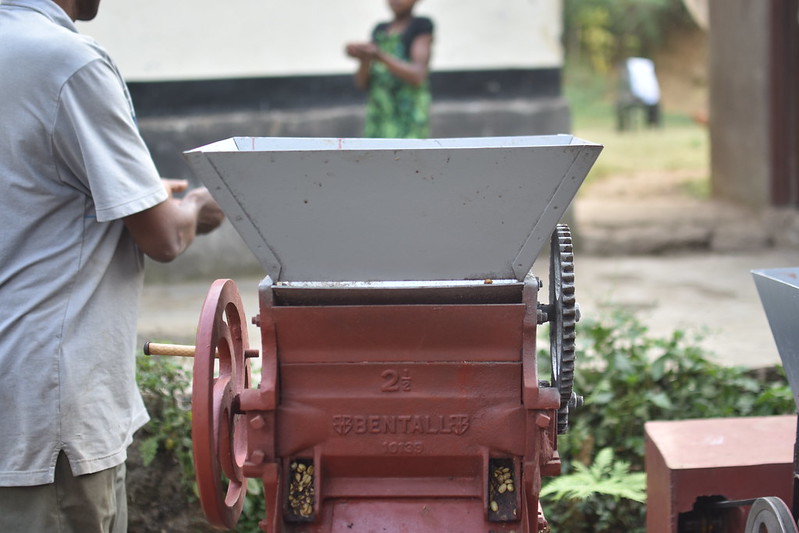 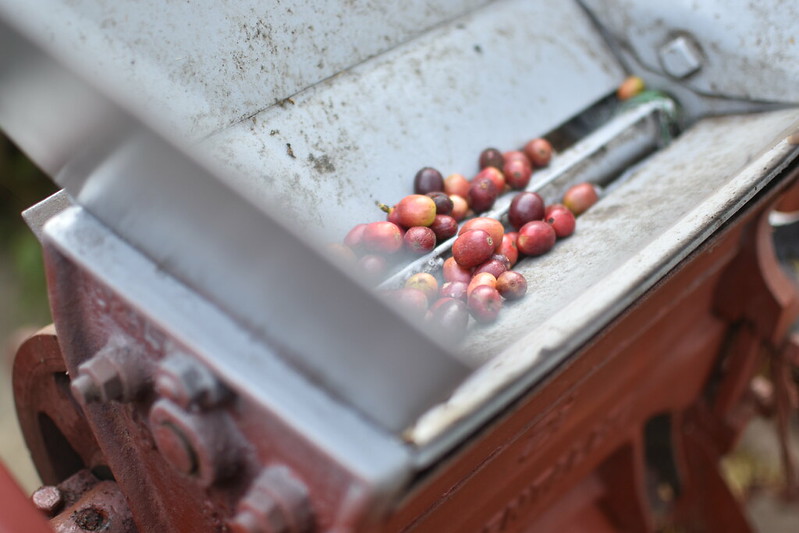 There are two methods of processing coffee – wet and dry. Mr Gideon and most Tanzanian growers employ the wet method.

The ripe, wet coffee berries are washed and then placed in a funnel receptor. Once the machine starts running, the drum rubs against the surface and separates the beans inside from the berry skin. 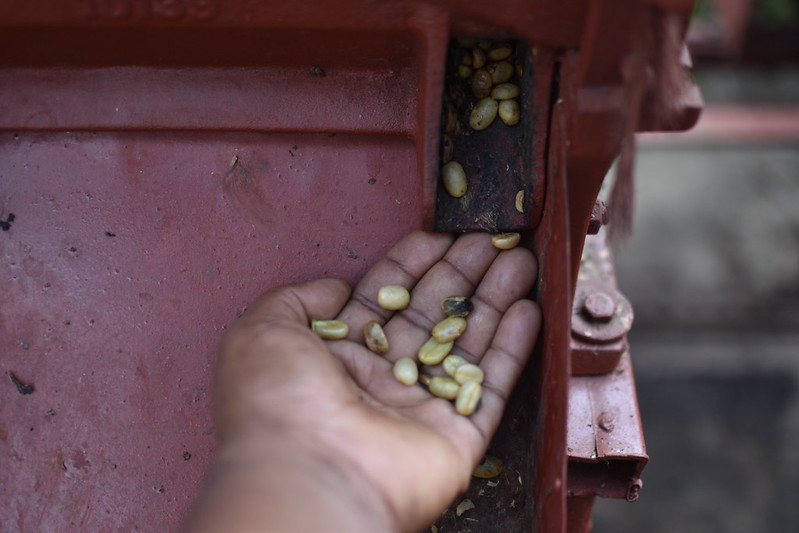 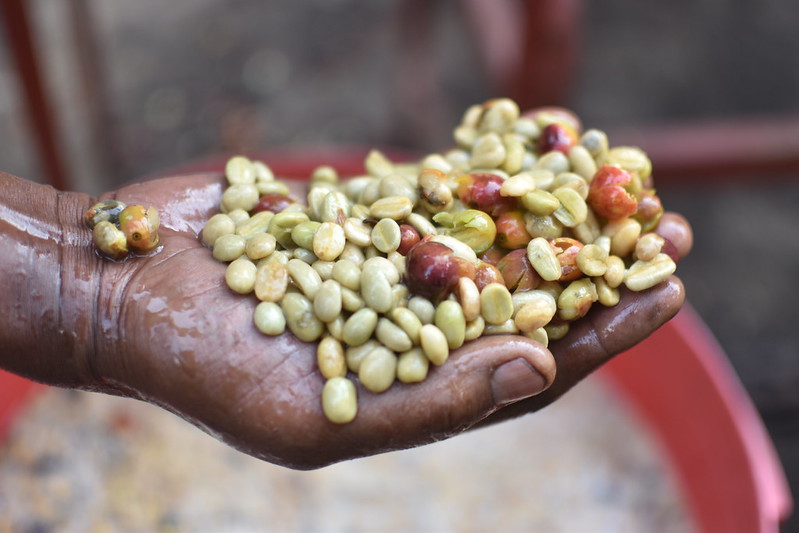 The beans are then soaked in water for a couple of days for partial fermentation. Some coffee berries have a single bean inside, others two or three. Single bean berries are prized according to Mr Gideon. 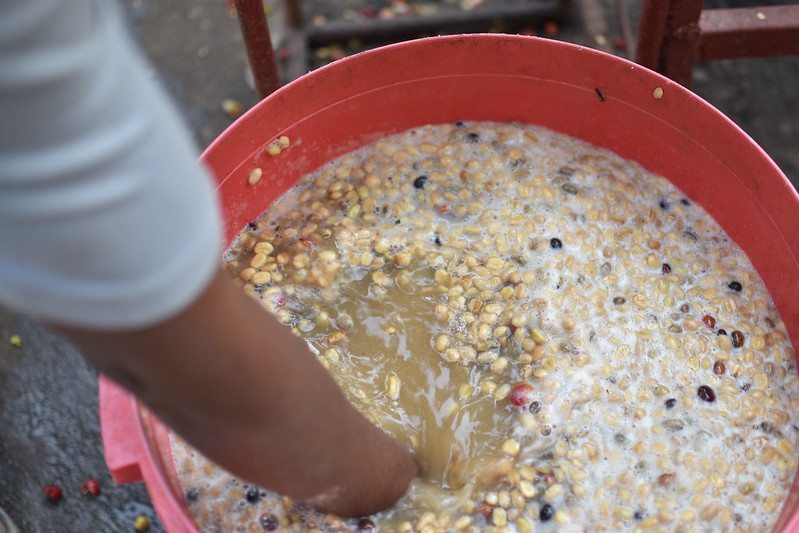 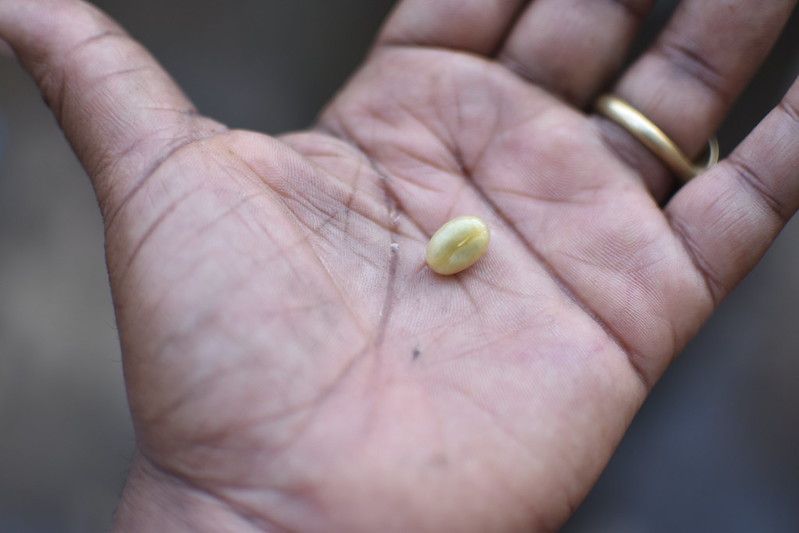 In the fermentation bucket, the soaking grades the beans – good quality, heavier beans with higher caffeine sink to the bottom and lower quality beans stay afloat.

One would think the lower quality ones had no value but that’s not the case. The Middle Eastern countries love it for its lower caffeine content and buy it by the ton. 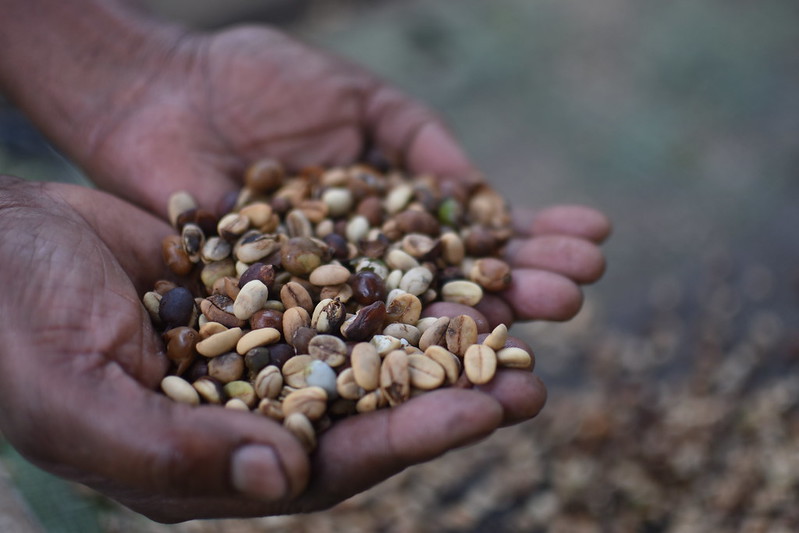 After fermentation – the fermented water, sweet and nutrient rich goes to feed Mr Gideon’s cattle – the beans are washed and then dried.

This is your parchment coffee bean – complete with skin/ husk on. 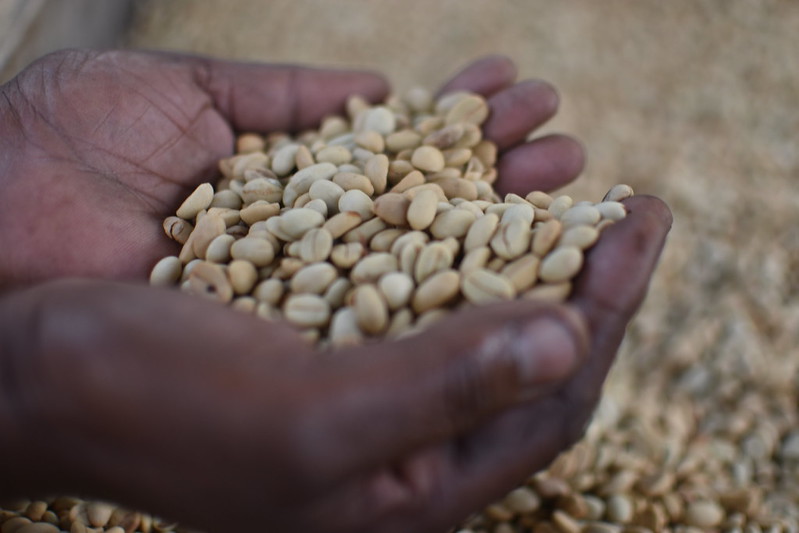 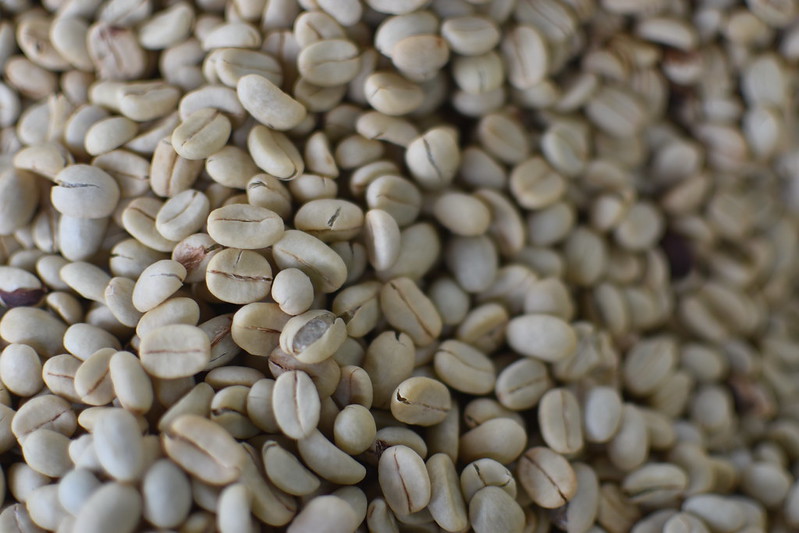 In Tanzania, the farmer sends his coffee at the parchment stage to the government processing centre where they strip it of the husk and then grade for size and quality. And then, it is ready for roasting – that’s a story for another day.

I found it incredibly fascinating to walk through the process and I look forward to the day this sorts of tours are possible in Nigeria as part of our efforts to celebrate Nigerian cuisine and agriculture with Food tourism. 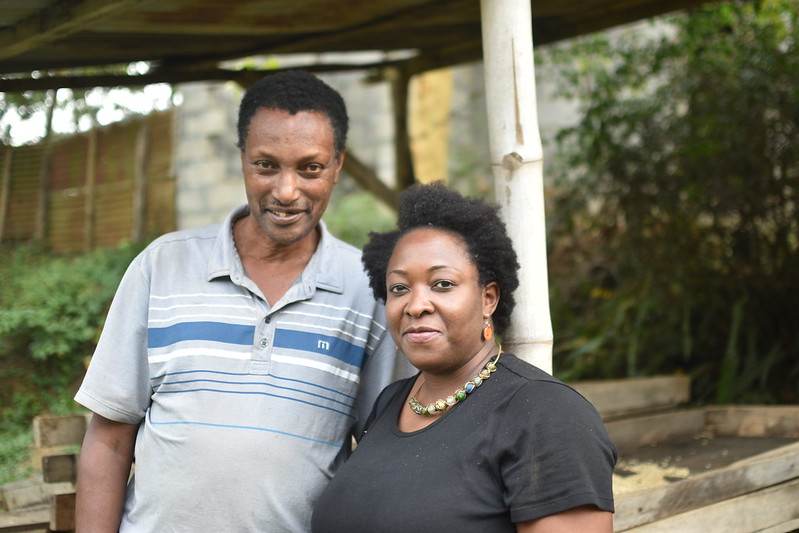