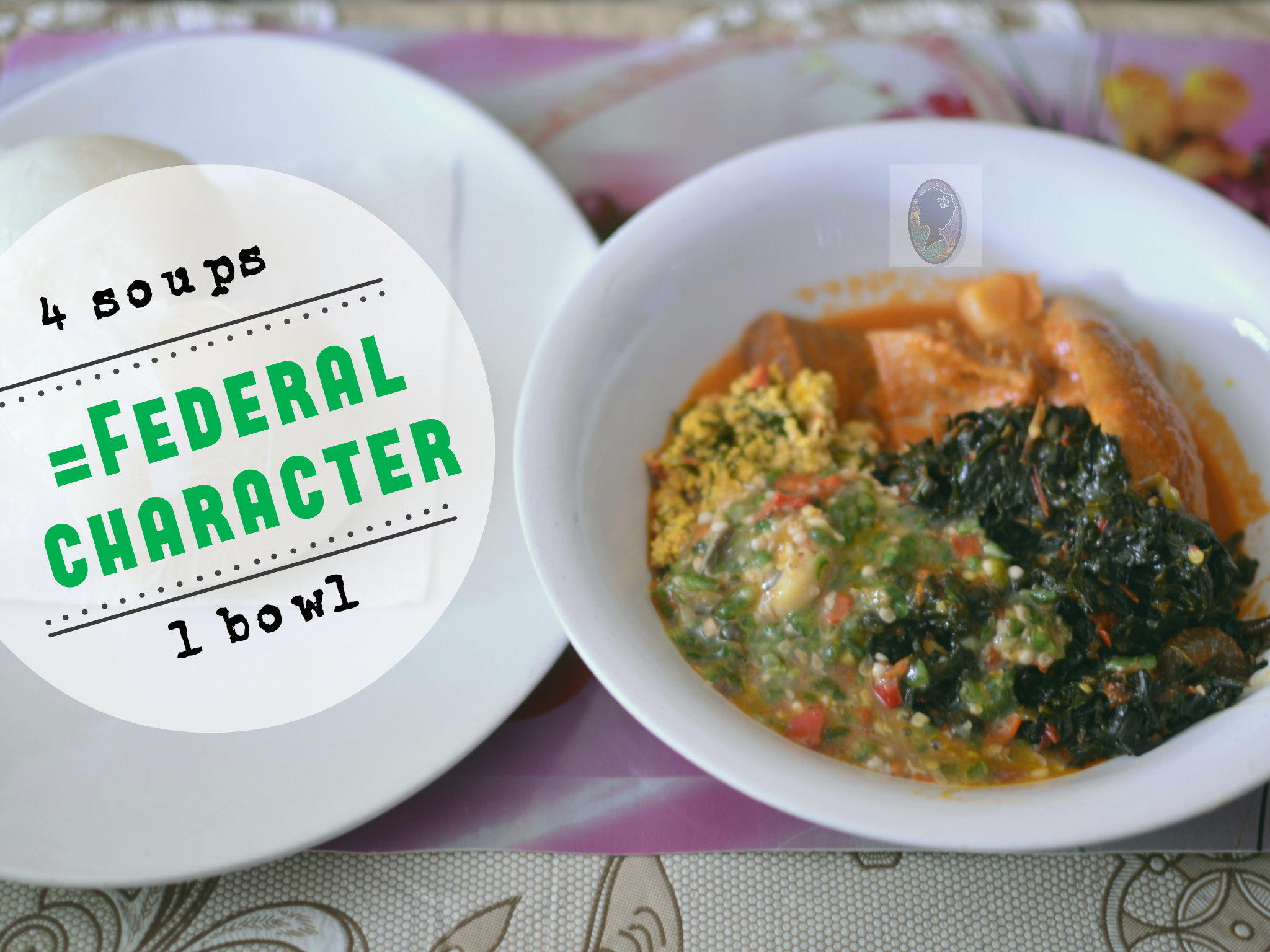 The first time M said ‘Federal Character’ I was behind my desk at work and I went ‘What? Why? How?’ He proceeded to talk about how the major tribes were represented, in the bowl – a new dimension to Geneen Roth and her belief – mine too, that everything about life can be found on the plate.

M’s descriptions made me laugh,made me want to see it. Don’t get me wrong, I had combined two soups before in the same bowl but it wasn’t a frequent occurrence and that was the upper limit of confluence for my soups. I had to see this. 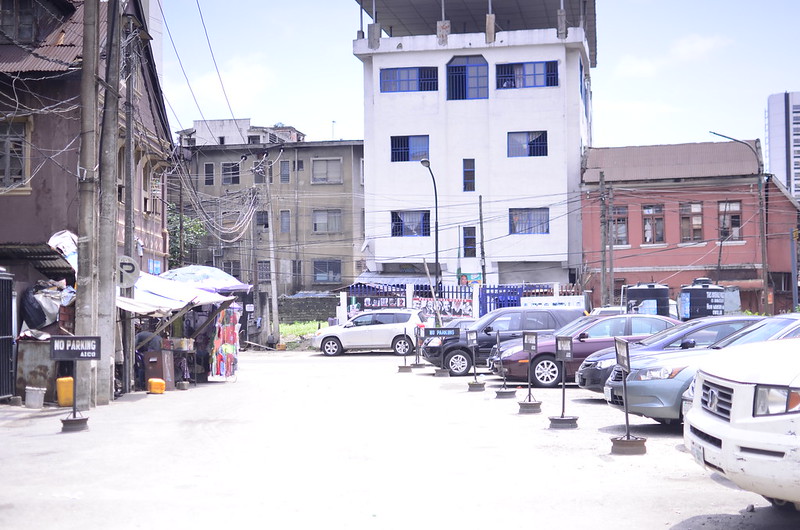 Since 1997, A Federal Character Commission Act has been established with guiding principles for all cadres of posts  ‘…Nigeria to promote national unity, foster national loyalty and give every citizen of Nigeria a sense of belonging to the nation, not withstanding the diversities of ethnic origin, culture, language or religion which may exist and which is their desire to nourish and harness to the enrichment of the Federal Republic of Nigeria.’

Maureen’s Kitchen is not far from our office. We walk through the heart (and its ventricles:)) of Lagos Island, stopping only to look both ways to walk across the road as the kekenapeps zip past. 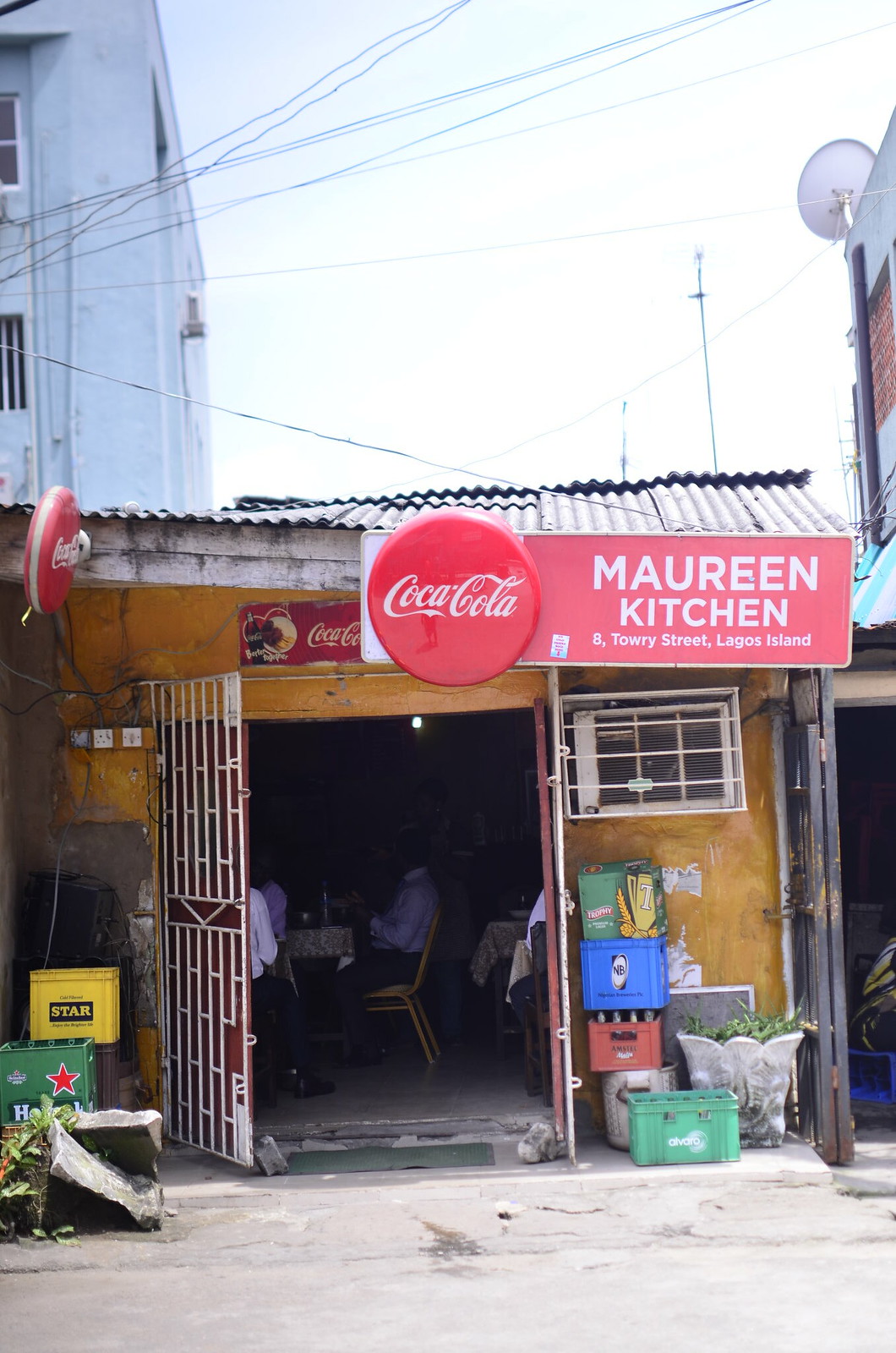 The walls are a thick bright yellow colour, shiny with the oil paint that doesn’t take common stains hostage, preferring to let ease off or be cleaned off. I stand at the counter, all excited while my colleagues – regulars – sit down. 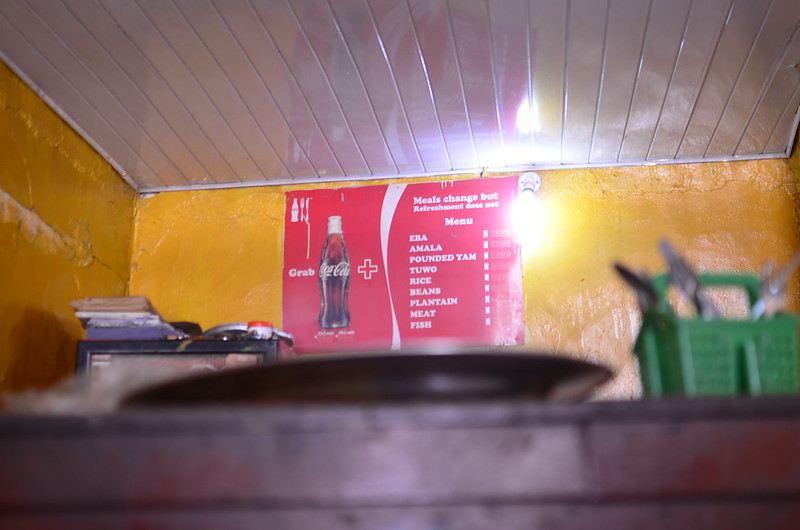 M orders. S orders and O does too.

When M’s bowl comes, I see what he means.

There is Egusi soup, of melon seed common in all of Nigeria. There’s Okro soup, which M ascribes to the East but which is also common across the country in various forms. There is Vegetable soup, common again in the South West, and ‘South South’ – in similar formats. The rest is stew with ‘assorted’ – tripe, cow leg, intestines and Pomo, cow skin. 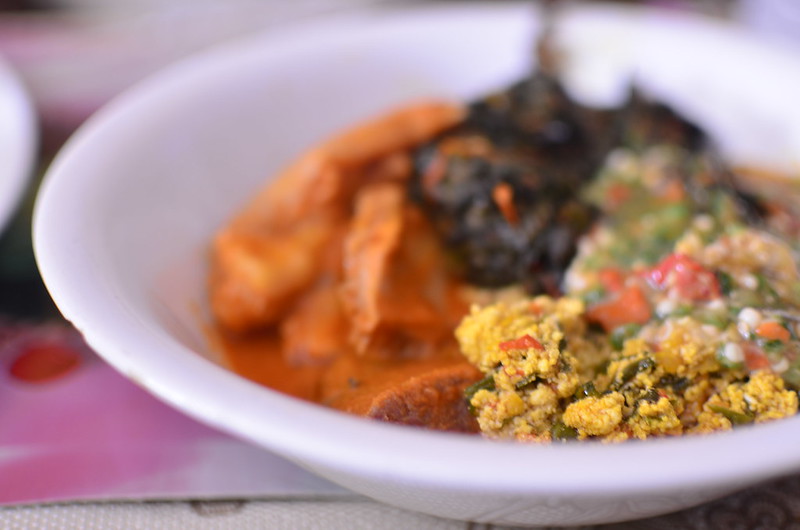 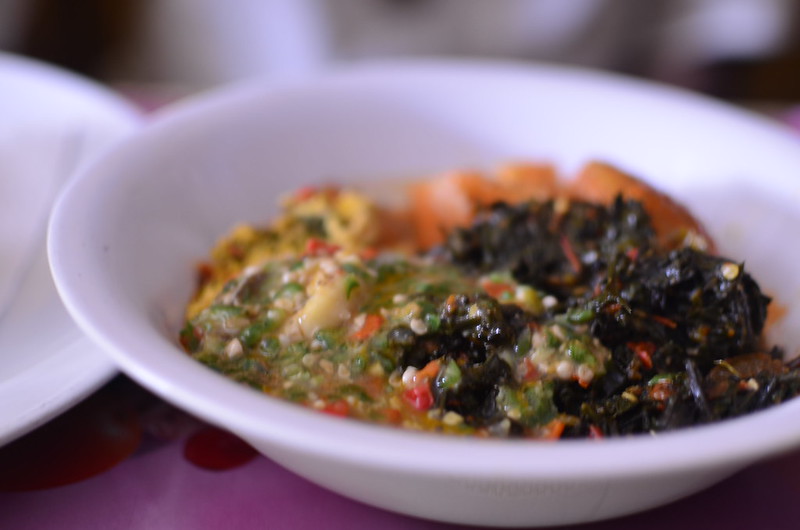 It’s interesting to see how each person tackles his own:

First, we all wash hands. Some of us are hand people, others are fork people, still we all wash our hands. 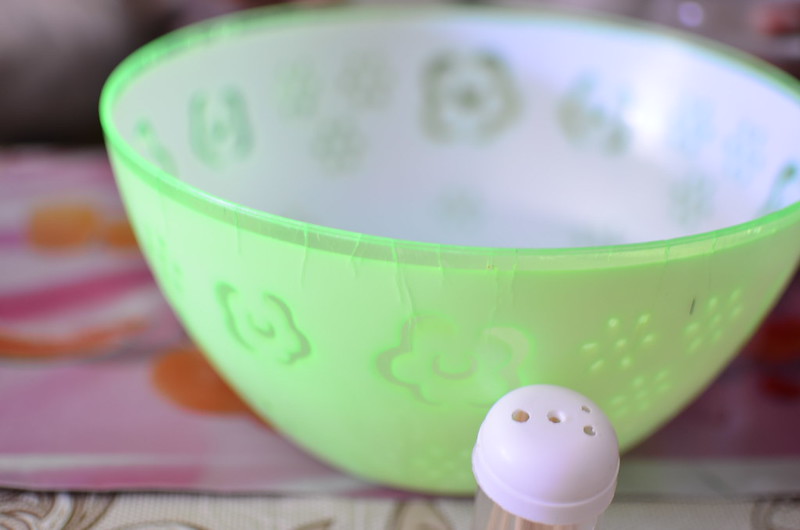 M stirs it all together. He loves the combination and doesn’t have a favourite soup. His pounded yam aka swallow is in a separate bowl.

S stirs it all together and thinks the combination is fine though Egusi is his favourite soup. His pounded yam is separate. 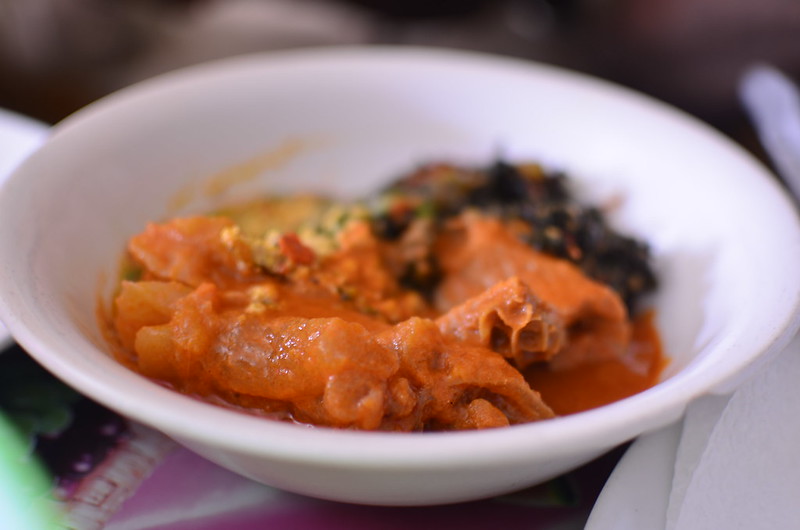 M and S eat with their hands. 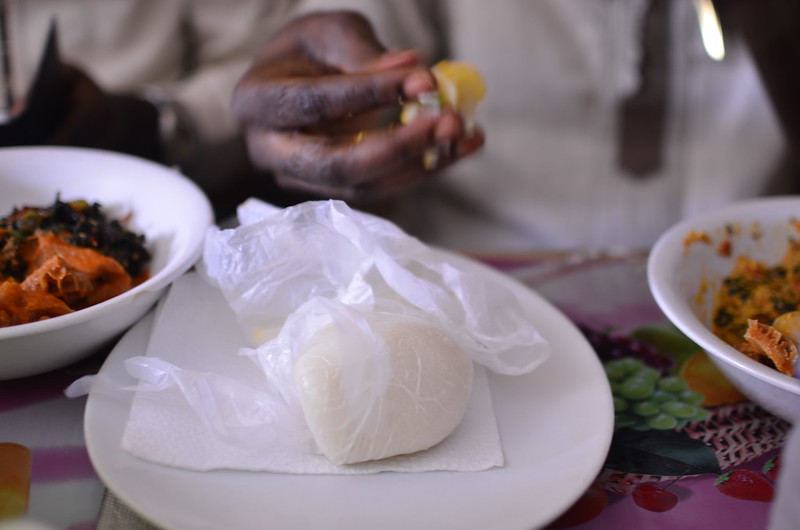 O has his soup in a flat plate, not a bowl. He eats his food with a fork, including the tough to eat cow leg. Skills, mad skills :). The vegetable is his favourite and he does not stir it all together. 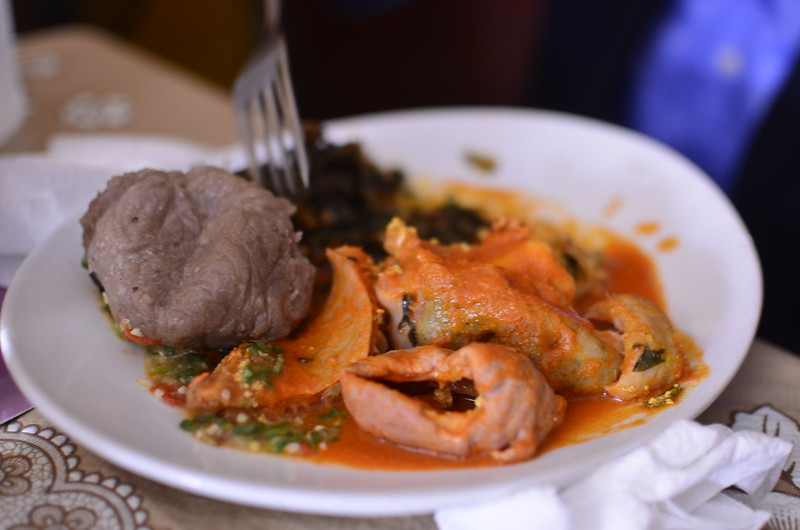 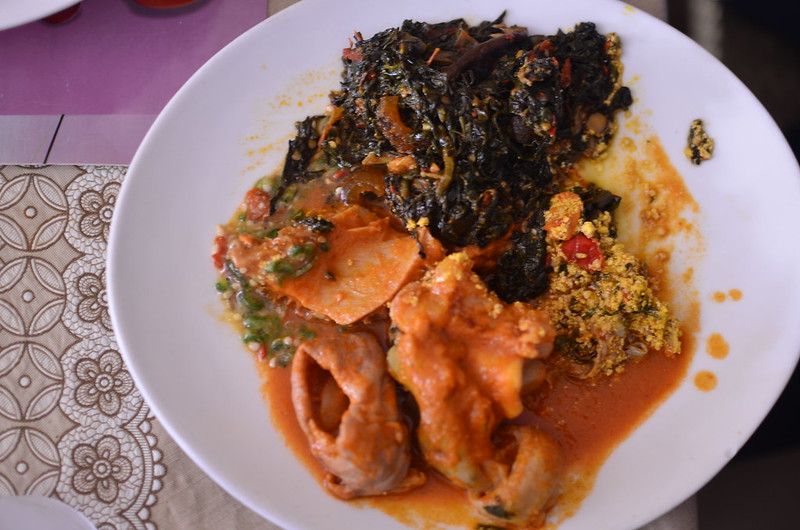 M, S, O – three versions of Federal Character. Because I just went for simple – Amala with Ewedu, from Jute leaves. 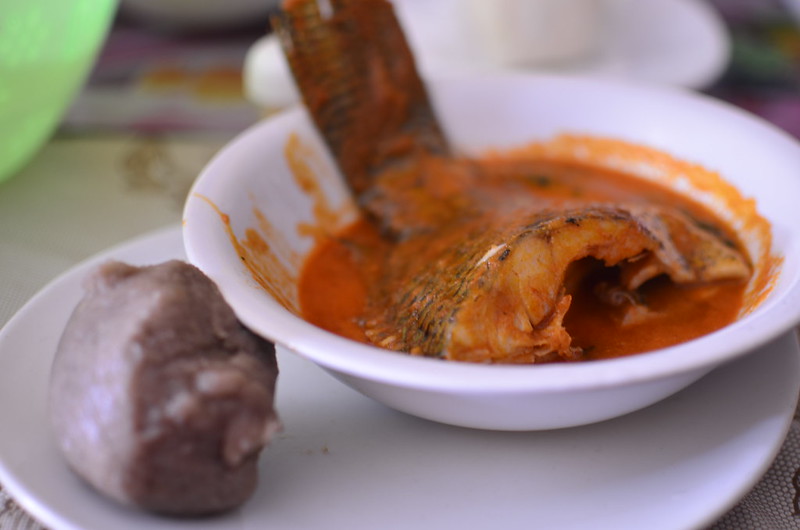 In the end, each man to his own ways; in the end, we’re unified by the mere fact of being born, human, as Nigerian. 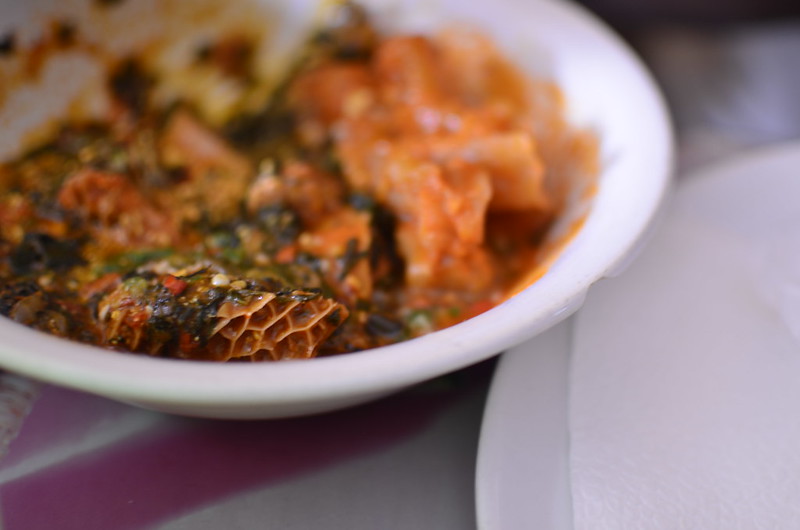 And some bowls are clean, the remains of what was once together. Federal character gone. 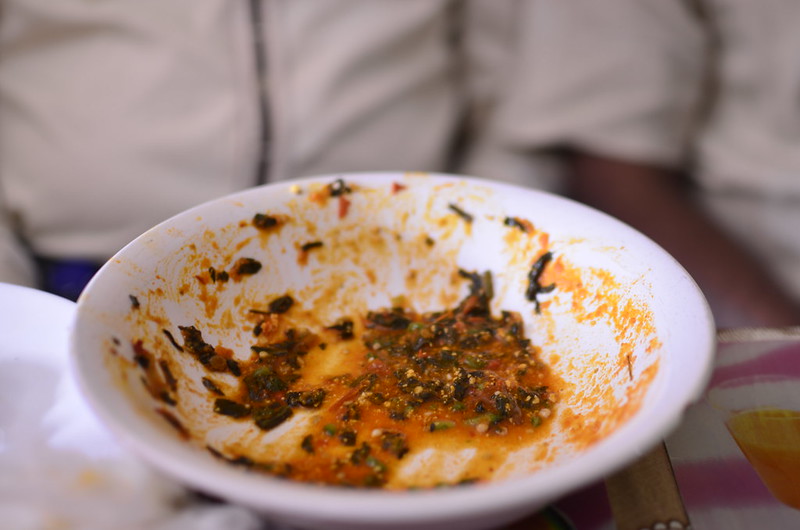 So there, my curiosity is finally soothed and I understand very well the desire for a mix of flavours and textures. Long live Federal Character. Long Live Nigeria. Happy almost October 1st/ Independence Day :).