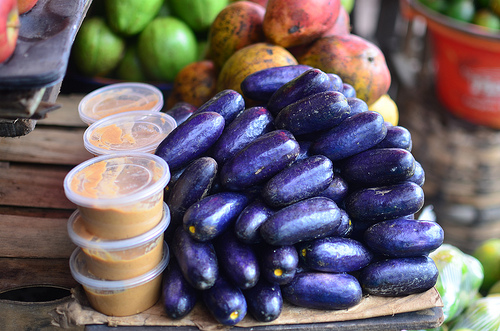 Can you really put it down to #tenthings? Well? If push came to…this is what my #toptenfor2013 is!

And these journeys, these explorations brought me face to face, and sometimes to mouth with some pretty awesome things. Like Uni.

In December 2012, on my plans with my friend Norma for when I was in New York to bring forth ‘Heaven sent‘:

“My plans – China town if possible. I would loveeee to go get some Rice paper rolls to take back …… I thought we could go to a restaurant, and no….not Momofuku :-).

I’d love to try Uni (sea urchin) and have nooooo idea where would be best.

Here are the highlights – #tenthingsiatelearntdidandmadein2013

At the start of the year, I decided I would chronicle the appearance of fruits and vegetables in Nigeria. My plan was to discover new fruits, and do new things with them with the ultimate view of developing a fruit and vegetable calendar to help people cook and plan better. This will come. 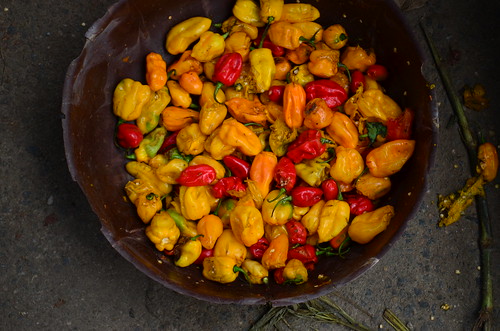 My desire to connect with farmers and traders piqued but I never quite worked out how to do it.

It was only in August that the cotton balls in my head began gathering to form cohesive thought. It was in August that I went to a Nigerian market after years…..to find out more about tomatoes. Inspired by ‘fruits and vegetables’ in season.

While there, it quickly became clear that the sellers/ market women face lots of challenges, particularly around produce preservation and waste.

I’ve been thinking how solar-powered dehydrators may help them on the journey, to preserve ‘the excess’. 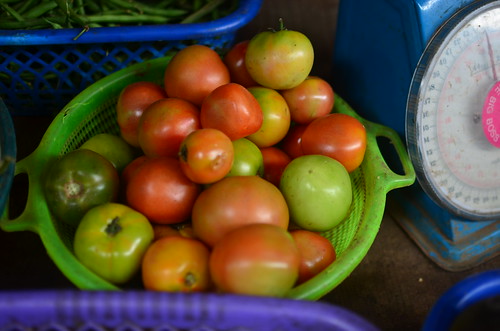 Overall, this discoveries have led me up and down so many paths. In the process I made new friends who have helped clarify and articulate my vision. In 2014, my desires shall be translated into action. 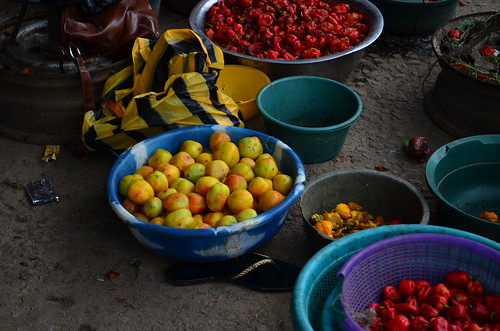 I also have found new inspiration and understanding in data. And facts, and the great work organisations like Gro-Ventures are doing to accelerate change in Africa. 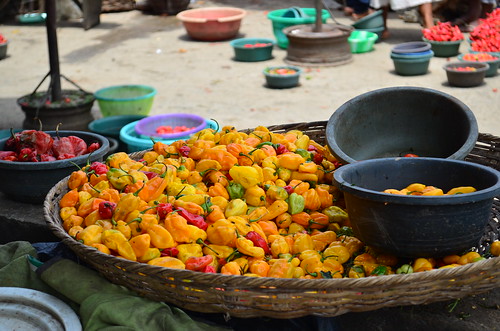 Its amazing how we come to these self discoveries. Mostly by chance. But they leave us whole…somehow. Inspired. Encouraged and motivated to drive change.

2.ATE: The Creaminess of Uni

My desire for Uni has been years in the making. It was back in 2010 in Barbados, amidst white sand and blue sea that ‘sea urchin’ into my life. I heard so much about it. And I must confess, I was pretty grossed out. Then.

Till I began watching Chopped.  Fast forward to 2012 and a craving for the purported briny creaminess for Uni struck. From Mount Vernon to Manhattan, I couldn’t make it happen though. 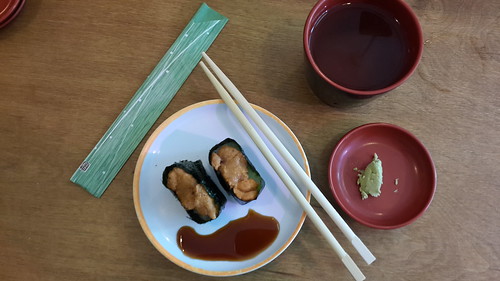 Till this September past, walking down a London street, I happened upon a sushi bar…where Uni was on the menu.

Also known as uni, those spiky creatures with the silken innards are the new foie gras. Complete with a sustainable, whole animal ethos, uni makes everything taste a little more awesome, whether it’s mixed into pasta, served atop toast, or eaten raw straight from the shell; The Bold Italic

It was weird. Not only because of the Uni but because they also had Edamame which has longgggggg been on my list.

I settled in to an afternoon of light feasting. Of discovering flavours.

I had the Uni Nigiri, apparently one of the more common ways of sucking in ocean sweet and brine. As I am a sushi maker and lover, this was perfect!

Sweet, perfectly seasoned vinegary rice, with the creamiest, tastiest, freshest bit of Uni perched on top. A touch of wasabi, bites of pickled ginger and a dash of soy…and I could have feasted all day! Except I had a flight to Geneva to catch :-). 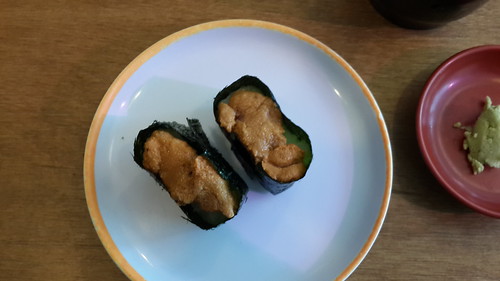 Awesome. Not a slight shred of disappointment. And a desire to have more. And more.

My friend M raves about Edamame all the time. So much so that I knew I had to try it, even if I didn’t like it. Which was not the case….. 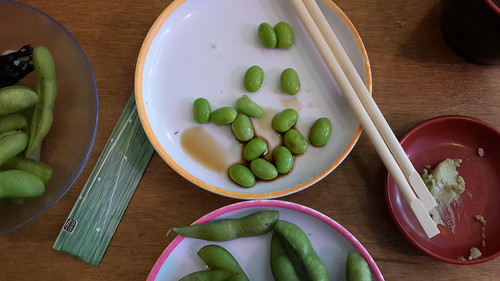 On this occasion, I found them in the same sushi bar I found my Uni.

Edamame (枝豆?) or edamame bean is a preparation of immature soybeans in the pod, found in the cuisine of China, Japan and Hawaii. The pods are boiled or steamed and served with salt.

The pod in addition to being a vibrant green, reminiscent of green beans were slightly furry, but not in a prickly, protective way. 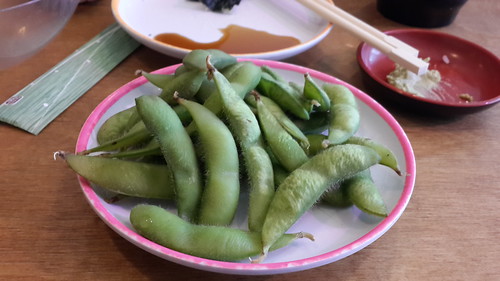 Broken open, they revealed bigger beans than black-eyed ones.

And were super delicious. They had the faintest taste of boiled groundnuts. I imagine that day-old, just-harvested groundnuts must taste like this. Fresh. Clean. Tasty. 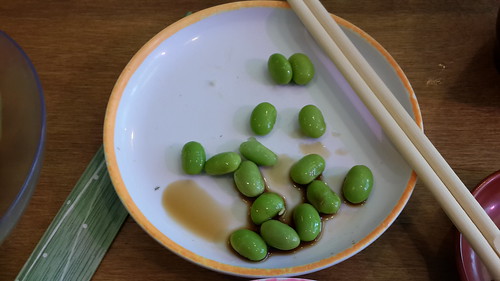 I shall be eating these every chance I get. #justsaying

4.LEARNT: The Work Required to Harvest a Single Tuber of Yam

I have small patches of ‘garden’ littered around my house. Yams, pineapples, grains of paradise and other things have taken root.

Last week, I praised the arrival of Harmattan, especially demonstrated by my dying, yellowing leaves. 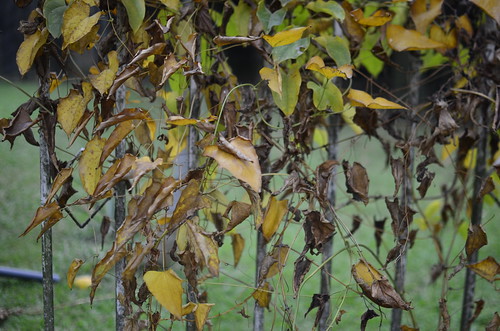 But one thing puzzled me, which I shrugged off – the fact that the grass on my front lawn which usually turns tan, remained green. Fresh. But…like I said, I shrugged it off.

Then a friend who works for me came over and said – ‘Oh, your yams are ready. The leaves are dying’. Lightbulb on. The leaves on yam tubers shrivel and die when the yams are full grown.

Thus began our journey to dig them up.

Let me just say – this is an arduous task! If you consider the following facts 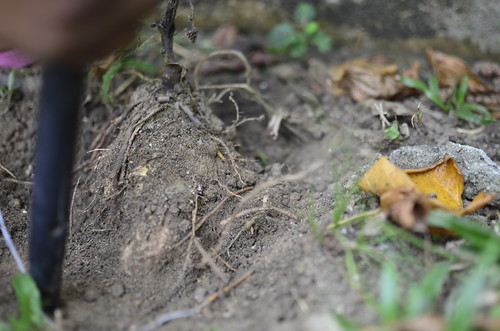 And the yams were planted in a compromising situation – between water pipes which supply the house. 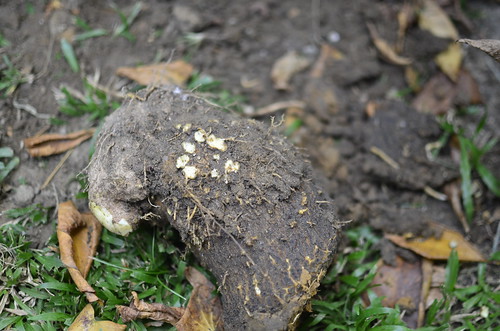 And yes…..in the course of our digging, we broke a pipe which required getting a plumber in melbourne, VIC to come out. But yes, we survived it all. 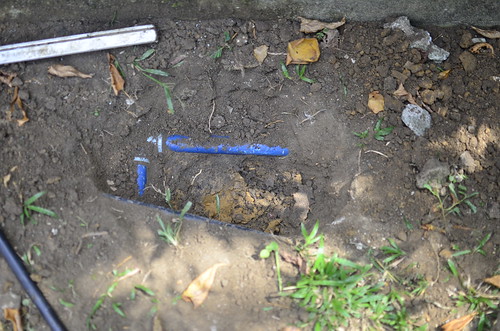 All I can say is a BIG shout-out to farmers the world over who have to toil this hard to get the yams we love so much on our plates. 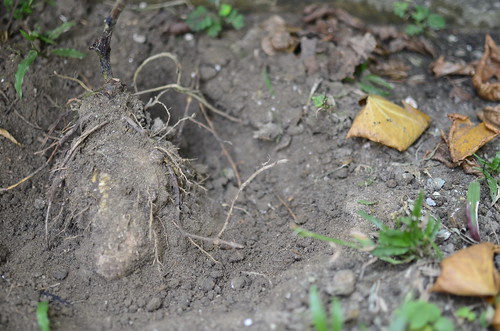 In the end, my harvest was rather measly – 2 super-skinny things that resemble potatoes and one quarter-sized tuber. All affected by the pipes around them.

I love buffet-style meals – lots of options to try and taste and enjoy. This Thali was no exception. Plus the fact that the colours of the dishes come together in a vibrant presentation. 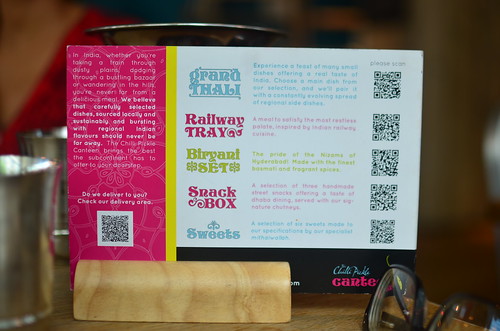 Thali (Hindi: थाली, Nepali: थाली; meaning “plate”) is an Indian and Nepalese meal made up of a selection of various dishes. Thali dishes vary from region to region in South Asia and are usually served in small bowls, called katori, which are placed on a round tray, the actual thali; often a steel tray made with multiple compartments is used.

Typical dishes include rice, dal, vegetables, roti, papad, curd (yoghurt), small amounts of chutney or pickle, and a sweet dish to top it off. Restaurants typically offer a choice of vegetarian or meat-based thalis. 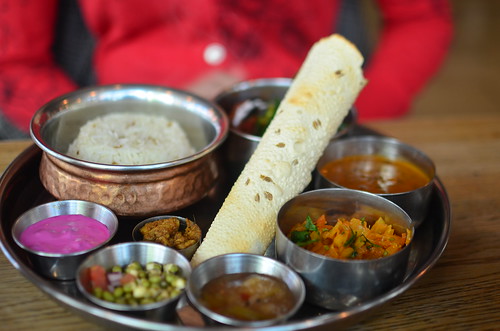 A big thank you to my friend M for the introduction 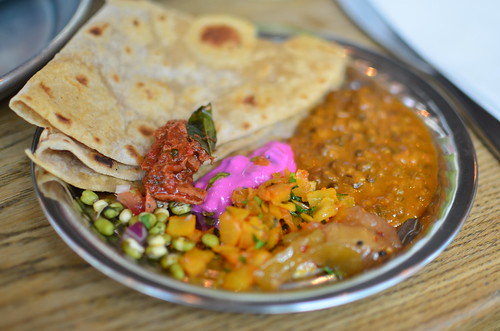 6.ATE: Falling in Love with Haggis

I was prepared to ‘hate’ Haggis but ended up falling in love with it.

Simple as that. In a restaurant in Edinburgh. 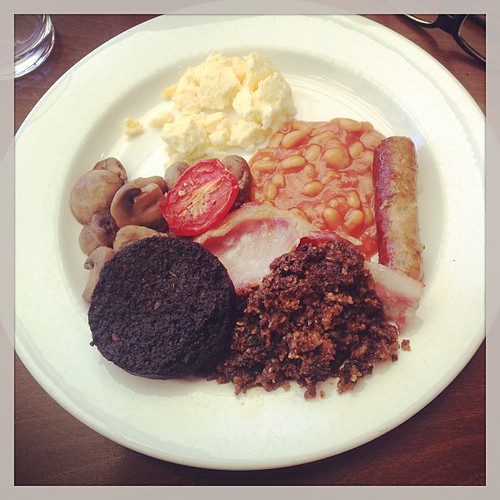 7.MADE: How to Make a Croquembouche 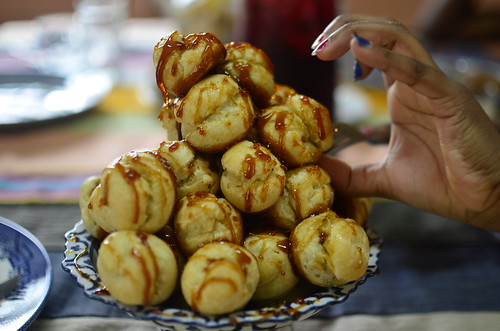 8.DID: Being on Radio, talking Food

Again, many, many thanks to the inspiring and encouraging Rebecca Subbiah of Chow & Chatter whose guest I was on Blog Talk Radio.

9.LEARNT, DID & MADE: Meeting The Spice Master, Lior Lev Sercarz

Undoubtedly meeting Lior was one of the most inspiring moments of 2013 for me. He embodies everything I love about food – the mindset of an Explorer, a deep passion and incredible dedication to his ‘craft’.

To say he filled me with courage in the hour we spent together is to understate it. 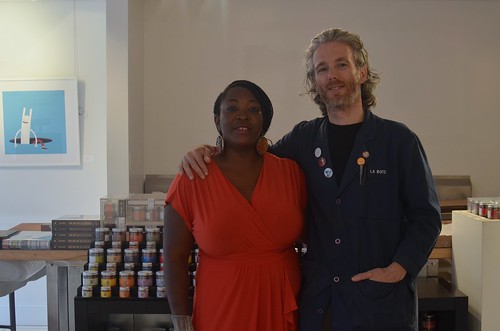 He inspired me to get creative. I decoupaged  a wooden tea box with some traditional ethnic wax fabric. 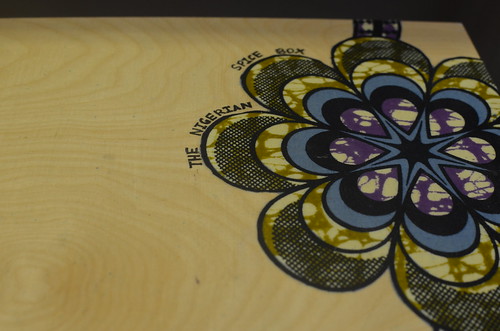 I filled small jars with African spices….. properly labelled and described, as best as I could…. 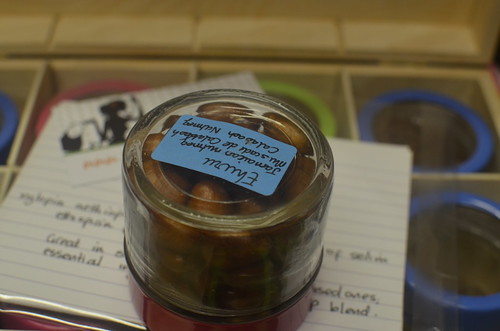 And made a gift of it to Lior. Sharing my piece of Nigeria. 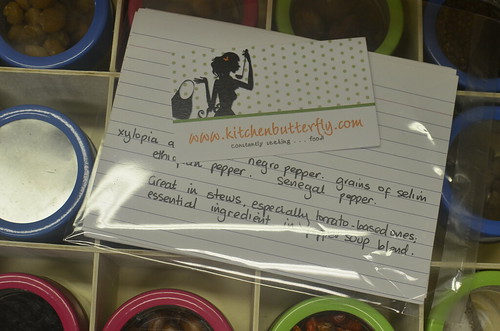 Finally, inspired by you – my readers, I’ve been to many markets since I brought you tomatoes. 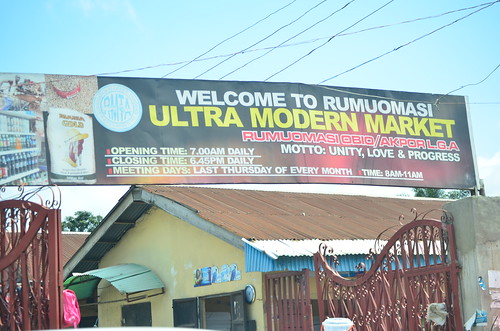 Each time, I see some thing new. 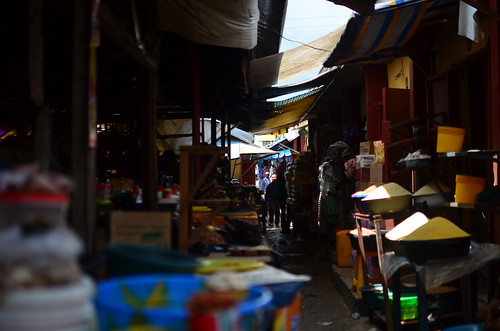 And learn something new.

I’m so looking forward to partying in 2014. And being spontaneous and adventurous. And in becoming the editor of my food & drink magazine.

Thank you so so so much for being here for me.