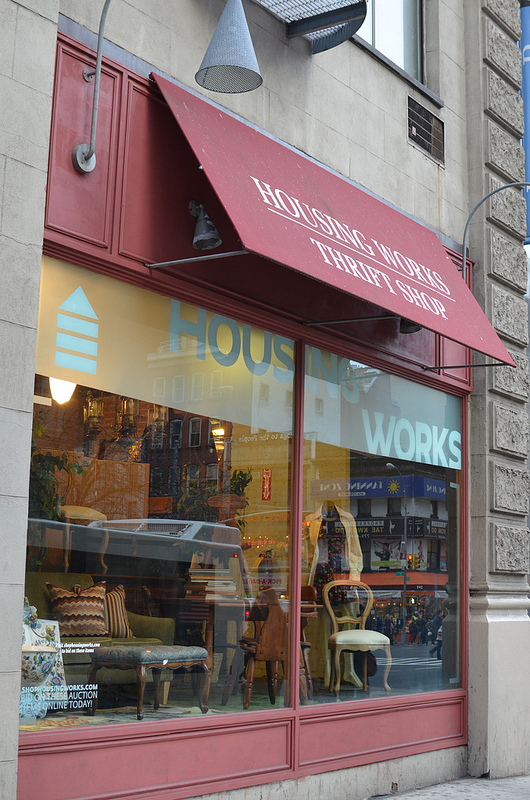 Its been years since I went to a Thrift store. OK, only a year or two.

I had to redress that and what better place to do it ladies & gentlemen than in the great city of New York? 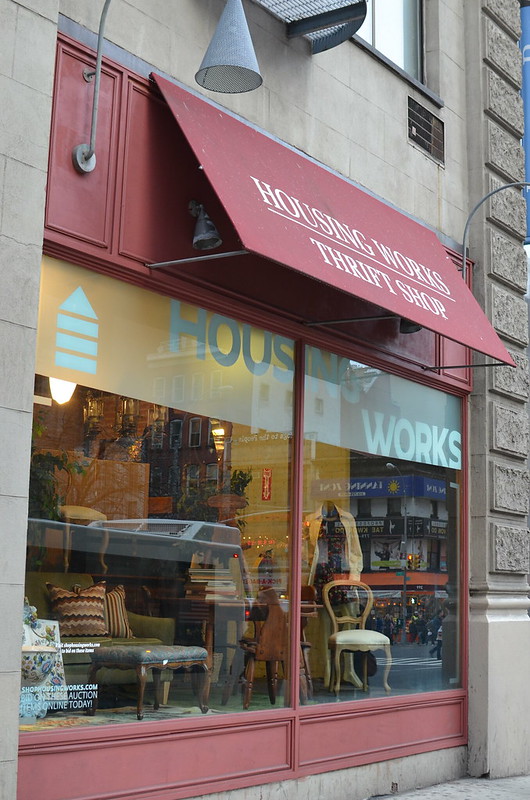 Like I’ve said before, eternal gratitude goes to Anna Hezel of Cup & Hammer, and Food52 for making me cotton on to bargains of the best sort at Housing Works‘ Gramecy Store on East 23rd street – only one of many in the city. I found the closest one to Kalustyan’s and went my merry way.

About Housing Works: Housing Works is a healing community of people living with and affected by HIV/AIDS. Our mission is to end the dual crises of homelessness and AIDS through relentless advocacy, the provision of lifesaving services, and entrepreneurial businesses that sustain our efforts.

In this world where each day is precious and so many wallow in poverty and suffering, both in developed and developing countries, Housing Works is doing a noble thing – to give care where it is needed. This is a cause that I am happy to support.

So this holiday season I want to contribute more to the goodness in this world, because there is. Despite tragedies, there is love and care. I hope that those grieving this season find solace and comfort somehow in the good that exists in this world.

I had the kitchen section on my mind. Cookbooks included. 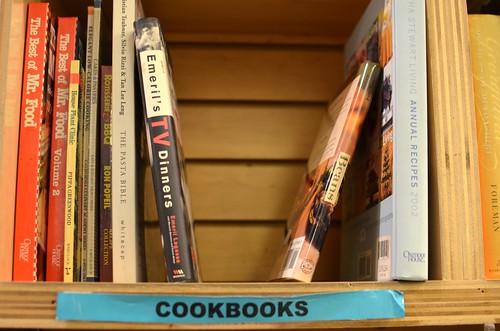 And it appears that there’s something in the offing for France and I. Le French et moi. For I found a cookbook sitting on the shelf, patiently waiting for me to snap it up: Jacques Pepin’s A French Chef Cooks at Home. For a mere $3. 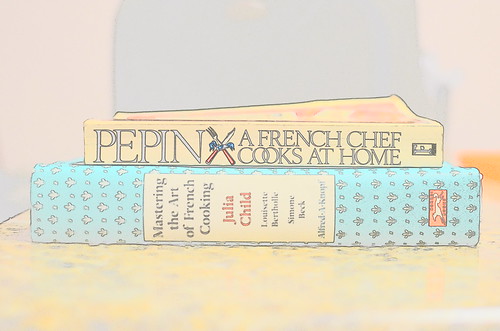 This is what my basket looked like in the first 10 minutes: Some NY Yankees Candy Cane Tree Ornaments, a glass glazed ‘Santa’, an angel, a patchwork fabric purse, 2 beautiful glasses and an elegant sweet box. More was to follow. 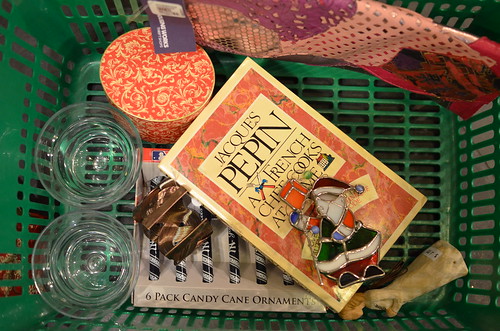 On a whim, I acquired these two goblets. Aren’t they delightful? 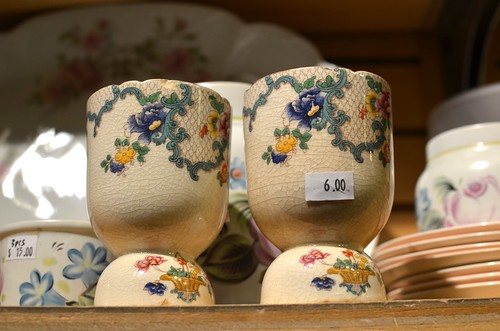 I loved this jug but since it wasn’t in my favourite shade of blue (cobalt), I passed it by! 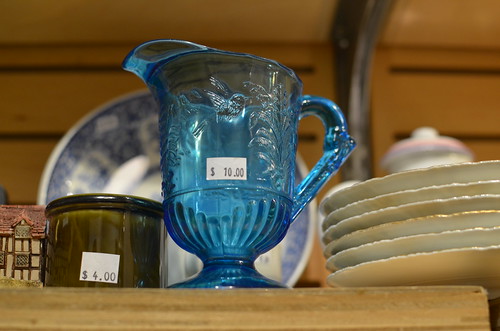 I contemplated getting more tree ornaments but decided against it. Our Christmas tree has been up since December the 5th, and there’s little room for more. 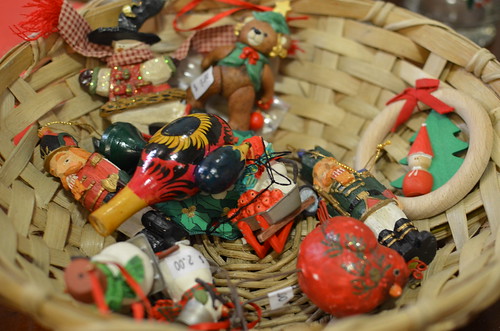 If I ever move to New York, I know where to come get some furniture. Regal. Stately. 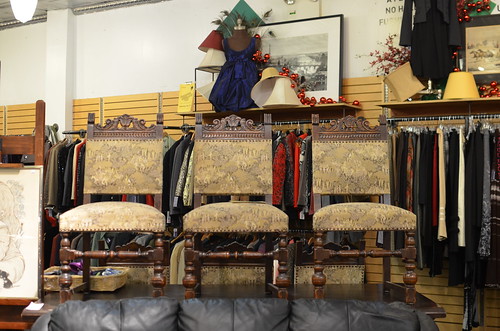 These three chairs would be perfect for my three children too.

I especially love this red fabric on the chair, and the picture of the Japanese woman on the left, advertising A ji no moto, a flavour enhancer commonly known as or containing monosodium glutamate (MSG) product.

According to Wikipedia: ‘Thanks to the company’s eminent status, its brand has found its way even to notable Asian language dictionaries as a half-synonym for MSG.’

I could even buy some concrete columns if I wanted. Who knew that prefabricated columns were in such high demand? 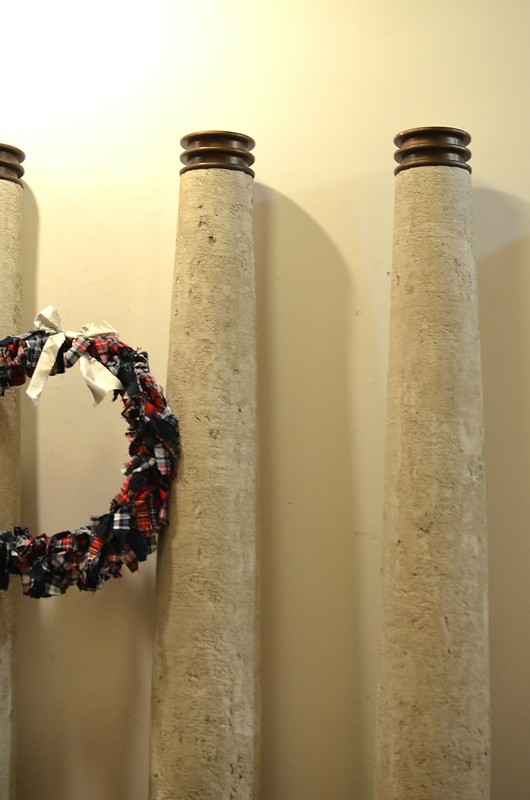 I had fun being thrifty in New York, and I plan on going back to the Housing Works Gramercy store for more goodies before I leave. 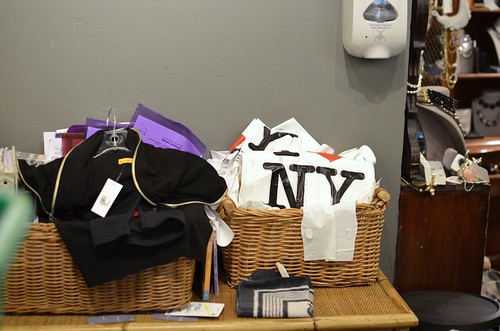 For more details on Housing Works, see below

I visited the Gramercy store