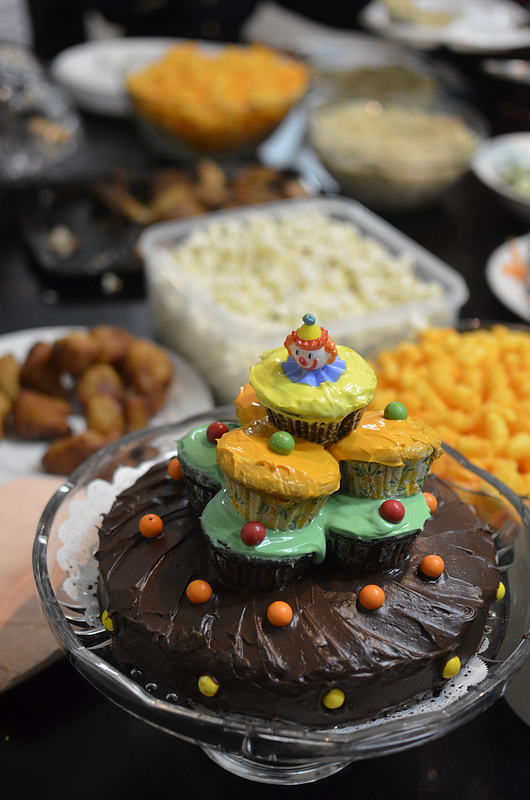 It took me many years to understand the meaning of ‘Thrift’. For some reason, I always thought it was positively linked to ‘Spendthrift’. Not negatively.

Alas, I was wrong.

1 (of a person or their behavior) using money and other resources carefully and not wastefully. See note at economical .

2 chiefly archaic dialect (of livestock or plants) strong and healthy.

It was a discussion on Food52’s Q&A app., ‘Hotline’ that alerted me to my misconception. It read How are you thrifty in the kitchen? I’d love to hear Food52’ers creative ways for making meals out of kitchen scraps and mistakes.

I didn’t contribute much to that discussion, after all I did have to consult my dictionary for some self-education. And then I put it all to good use. to be honest though, I’ve always been thrifty. Pineapple peels to juice? One example. Apple leavings to Pectin? Another.

This month, I am thrifty in the kitchen.

I have memories of making this wonderful chocolate dump-it all cupcake tower, amplifying the chocolate with leftover nutella.

To help me get the most out of the jar, I used a special Dutch instrument called the ‘flessentrekker’ – the bottle puller! The Dutch are some of the thriftiest people on this planet and they’ve devised a tool to clean out jars so nothing gets left behind.

Its consists of two parts – a long, metal rod about 60 cm, fitted with a flexible, silicone semi-circle which is detachable. The flexible rim on the semi-circle allows the tool to get into the narrowest corners, and the long rod ensures no vessel is too long, or deep.

The resulting cake didn’t have a strong Nutella flavour, if any….but at least I used it up wisely!

I have left over ginger juice, from a batch of candied ginger. It goes into two amazing things – ginger rice and a wonderful ginger drink which I read about on Chef Afrik. It is a recipe from Guinea called Guinean Ginger juice and involves using soaked liquid from grated ginger. This ginger juice is combined with sugar after an overnight rest, along with citrus juices – orange, lemons, lime.

It makes the best ginger ‘lemonade’ ever!

And the citrus skins? The skins are my Thrift Tip #3

In my kitchen are lots of candied peel. I candied a hugeeeee batch of various citruses, once I was done juicing them. And then finished them off in different ways. Some were rolled in sugar, to form nice, tasty bites. But my favourite is a jar of sugar-preserved candied citrus. Not dissimilar to salt-preserved lemons, but the starting point this time is sugar-soaked citrus peel.

It is a wonderful addition to my Simmer & Stir Christmas cakes which are fresh out of the oven as I write.

I use leftover cinnamon sugar from rolling my churros in, for cinnamon rolls.

Are you thrifty in your kitchen this month? What are your favourite ways to re-purpose things in the kitchen?

Thanks to Celia of Fig Jam and Lime Cordial for the inspiration. She does a monthly ‘In My Kitchen’ feature and rounds up contributions.