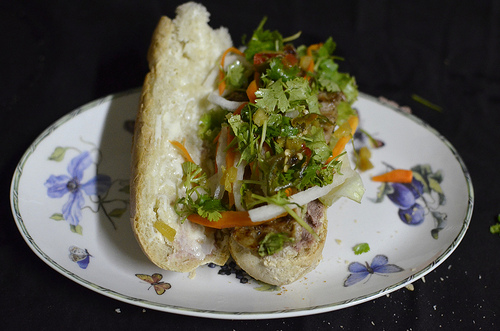 Emergence suggests a state of transition, a trajectory of becoming. It is antithetical to structural or static approaches. Santo saw emergence nestled between the Daikon and the baguette of the banh mi sandwich; GastronomyatBU blog.

No one told me. About Stinky Daikon.

Durian……I’ve heard about …..being banned from airports and hotel rooms but never, ever, have I come across a stinky daikon conversation.

One Friday evening, at a small vegetable store I frequent, I happened upon these long, white radishes that I suspected were Daikon. I’d had them on my mind for a very long time, primarily because of a Banh Mi recipe on Food52. All that was missing from the recipe was pickled carrots and radishes. Till that Friday of course. I had the Pork Tenderloin. Access to great French Bread…and tinned/canned pate. Please don’t look away in disgust.

I had the mayo, the cilantro, the chiles. All that was left? The daikon.

I found a few recipes for my basket of daikon radishes. 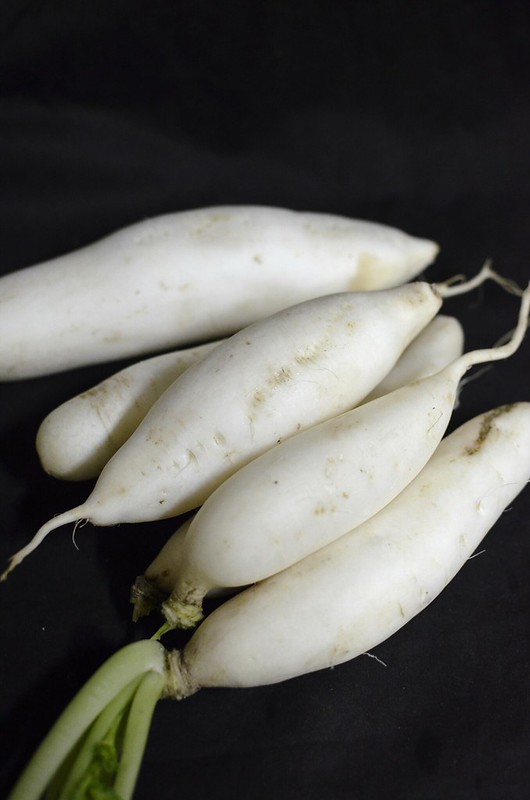 Starting with an olive salad, which used the radishes in the raw, nicely diced. Recipe coming up in my N’Awlins (New Orleans) dinner. Terribly enjoyed.

The next couple of recipes involved pickling which were a snap to make.

This Tasty Pickled Daikon recipe, from Food52.com was the first to put me in a pickle. I loved the starburst pattern of thinly sliced daikon, set in a golden pickling liquid, beautifully coloured by my friend, Turmeric.

With chiles and spices…..

…. I have no doubt this will be a delightful addition to salads and sandwiches. ThoughI haven’t had a chance to try it yet.

But it was the third recipe that had me buying the radishes in the first place. The traditional Vietnamese pickled carrots and radishes.

Pickles play an important role at the Vietnamese table. They provide textural and flavor contrasts to food. For example, the flavor of rich foods gets cut (mitigated) by a tart-sweet pickle. At Tet Lunar New Year celebrations, you always see several kinds of pickles on the menu as that’s a holiday where lots of fatty dishes are served.

In banh mi sandwiches, the daikon and carrot offer a crunch that pairs well with the baguette and the tartness offsets the savory rich meats and mayonnaise.

Again, this was a snap to make. One cuts up vegetables, with some precision, prepares them for a soaking, dunks them and leaves them to mature. Grow up. Like a teenage boy. One hopes that the end result will be beautiful flavor. What one doesn’t plan for on a Saturday evening, with a dinner table full of children is pinched noses, and threatening tears even….to rid the dining room of  the ‘stinky vegetable’. 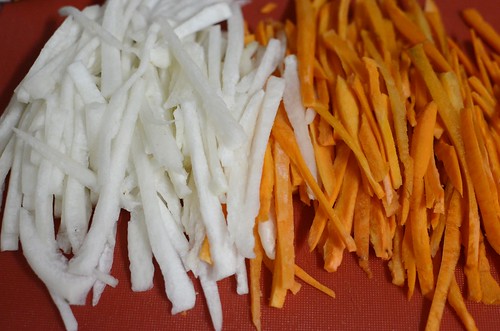 I heed this call, with speed. I want nothing to wreck havoc on the progress we’ve made as a family with ‘eating our vegetables’. So I hastily grate carrots and cabbage, fresh and daikon-free for the table.

The daikon stinks. I wonder if its gone bad but it hasn’t. It tastes good.

Its much too late to go to the Internet to check if the ‘rotting vegetables garbage-can’ stink is normal. I just eat my canned liver pate-smeared French baguette, stuffed with the most delicious, caramelized pork tenderloin that was a snap to make but full of sweet and complex flavours thanks to the maple syrup, fish sauce and a host of other Asian staples – ginger, garlic, spring onions, sesame oil and soy sauce. This marinade will be a hit in everything – fish, meat, vegetables.

The crowning glory are fresh cilantro, all chopped up with some diced scotch bonnets for balanced heat.

And then I read it all, after the meal. The fact. The literature on Stinky Daikon.

How ‘Daikon is in the cabbage-mustard family that is known to have strong smelling sulfur compounds. The concentration is greatest in the skin, so peeling can reduce the smell as can soaking in salt water. The smell is less noticeable when daikon is eaten raw. Chopping or grating and pickling (acidifying) can increase the smell.’

And how….as I discovered, it can stink the whole house down. Some suggest ‘airing’, leaving the jar open for about 15 minutes. Apparently this will dissipate, diffuse, chase away some of the ‘cat-pee, wet clothes, rotting vegetables’ smell. Sorry to break that bubble, ’cause it won’t. I know. I’ve tried it.

Regardless, the meal was so awesome that I’ve forgiven the Daikon. Totally. 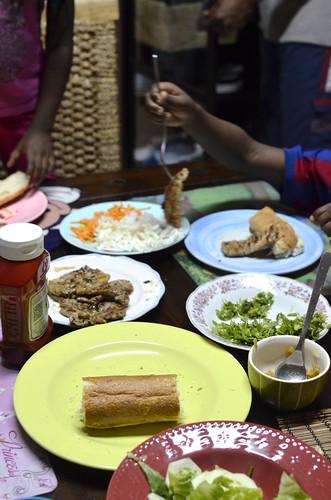 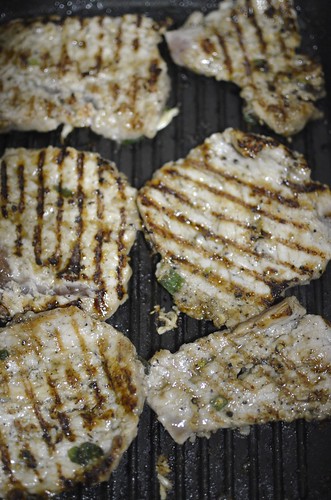 Remembering only the wonderful time I had pounding my cuts of pork into flattened pieces. And of course devouring the sandwich. 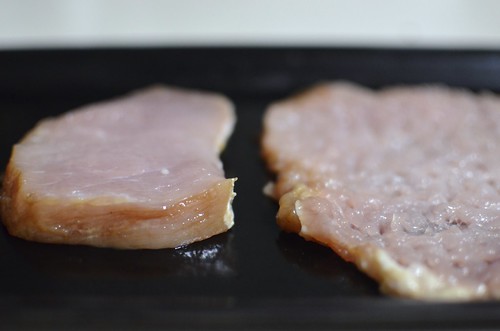 As y’all know, I love my French. The French and any excuse, be it bread or butter, to get close to them……is not passed up.

I love that they leave a bread legacy wherever they go. Like they did in Vietnam. Which is the result of this fusion sandwich. 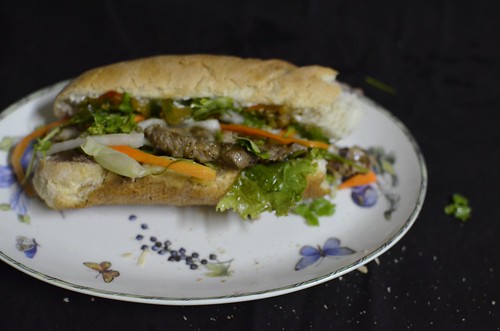 A bread legacy that spans the world from Panama, to New Orleans, Vietnam and France itself. Bread is the stake in the ground, or the bun in the oven they leave behind – a national treasure, their national treasure shared with all the world.

You can’t give what you don’t have, right?

And you use what you have to get what you want, right?

You’ve got me France…..on both. I applaud you.