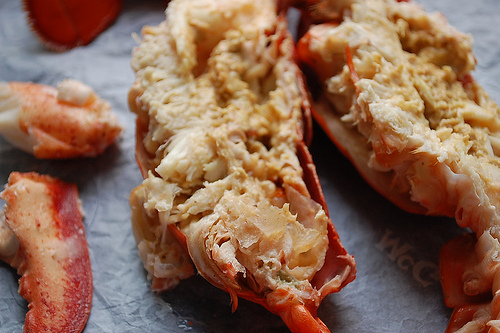 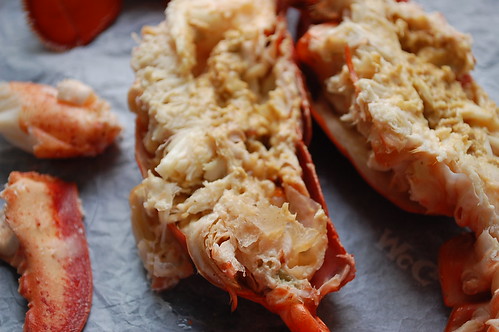 Two,
Thank God not the ‘Terrible twos’
Cause I’m not a toddler.
And I think in this world of blogging
Two is definitely adulthood.

Two
The number of times I’ve had lobster
One – how many times I’ve cooked it
And so Kitchen Butterfly is two.

Spurred on by visions of Julie Powell with turquoise rubber glove, freaking out in a bid to cook three lobsters a la Julia Child, in ‘Julie and Julia’, encouraged by a great 4-pager in the May 2011 issue of delicious (UK) and confronted by swimming lobsters at Sligro on my weekly shop, I bit the bullet and walked up to the ‘Fish man’ saying, ‘I´d like to buy a lobster please’. 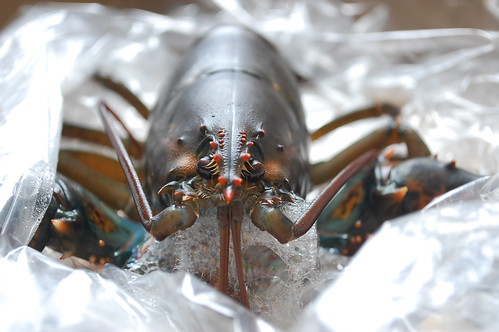 On our short walk to the ´tank´, I asked him where the lobsters came from and was truly shocked to hear ´Canada´. Looking at my widened eyes, he said ´Don´t worry, they didn´t swim, they came by air´. And I actually thought they were local.

Canadian Atlantic Lobsters are harvested in the cold pristine waters along the rugged north Atlantic coast of Canada. They are harvested from the icy salt water the same way they have for generations, in traps attached to lines hauled one at a time. Since the lobster industry in Canada is based on an integrated fisheries management approach, it ensures that harvesting and processing methods are conducted in an ecologically responsible manner. When you eat Canadian Atlantic Lobster you can be assured the lobster is both good for you and that the harvesting method is good for the environment. 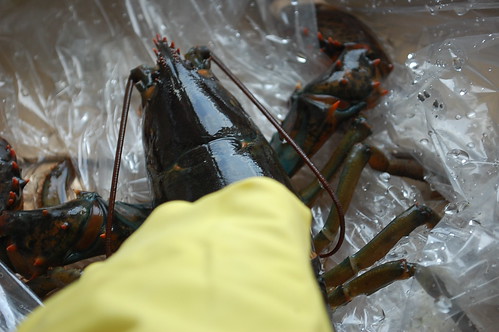 I went ahead and purchased one, gingerly carrying the white box from counter to car. To silence the nagging voice in my head always bellowing ´You´ve never cooked lobster. You´ve never cooked lobster´. And because the both times I´ve ordered lobster, I haven´t ´gotten´ it. I have been perplexed by the taste and texture and resolved that making it myself is the best way of getting a sense of its true character. And so here we are. 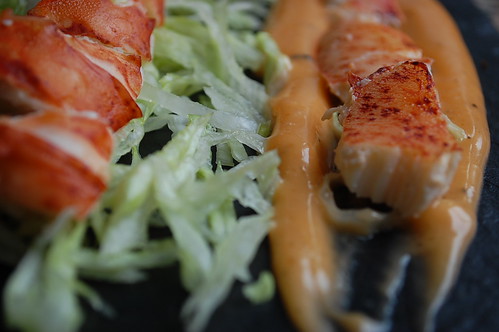 Celebrating another year of blogging with friends – old and new, inspiration from all corners of the world and most of all, thanking God for the joys and hope this blog brings me daily – with encouragement, learning and laughter.

And so, I offer up some steamed lobster and mayo, instead of a glass of Champ. And thinking again on Julia, the first step was to ‘Google’ ‘How to humanely kill a lobster’.

Some cooks are concerned about humanity issues of cooking a live lobster. In fact, research indicates the lobster has no central nervous system or cerebral cortex to register stimuli, thus the creature mostly likely can feel no pain. However, killing the lobster just before cooking is the preferred method.

To guard against chewy lobster, I opted for the ‘steaming method’, with helpwithcooking.com holding my hand. Note that it will take a touch longer to steam your lobster rather than boil; however, many people say that the result is even better than boiling, giving you a succulent and tasty lobster meat. 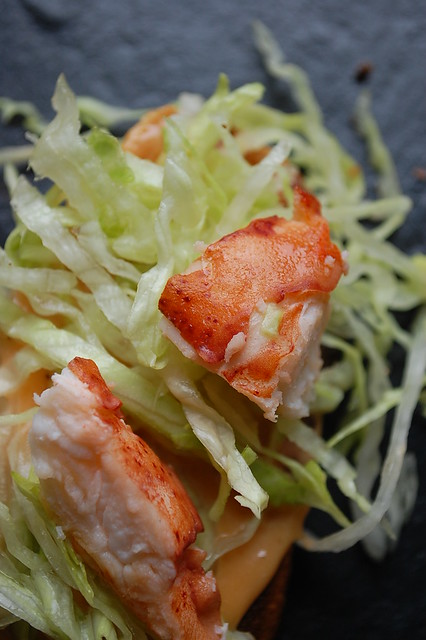 Begin timing once the water is boiling again. Steam the lobster for 14 minutes for the first lb of weight and then an extra 3 minutes for each extra lb. A 2 lb lobster will cook in 17 minutes, a 3 lb in 20 minutes. Try not to overcook the lobster, as this will result in tougher and less succulent meat. Overcooking also means that some of the delicious flavour will be lost and the meat may shrink, become stringy or even mushy.

The lobster is ready when it has reached an internal temperature of 80°C (180°F). Once it is done, drain and serve immediately. 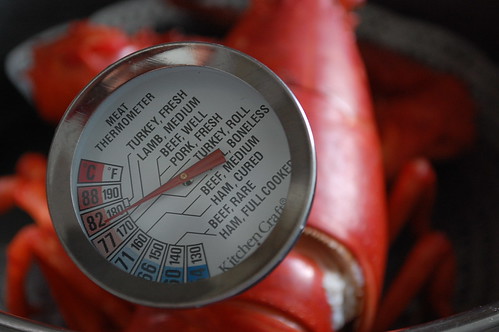 If you won’t use it immediately, plunge it into a bowl of ice cold water (very cheffy) to stop it from cooking. Then drain. 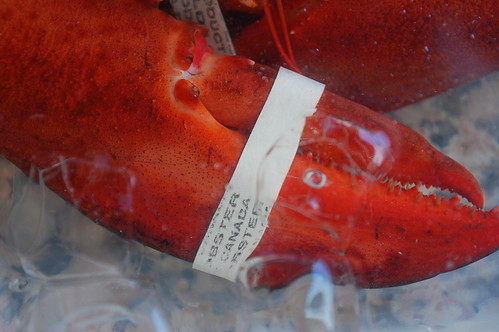 I removed the meat from the shells, using a fondue fork. A meat mallet and my kitchen scissors.

How to remove the meat from a cooked lobster

Twist off and discard the thin, spindly legs.

Twist off the claws and break into three, at the joints. Then crack each claw open (with your mallet),  and using the fondue fork, lift out the meat. 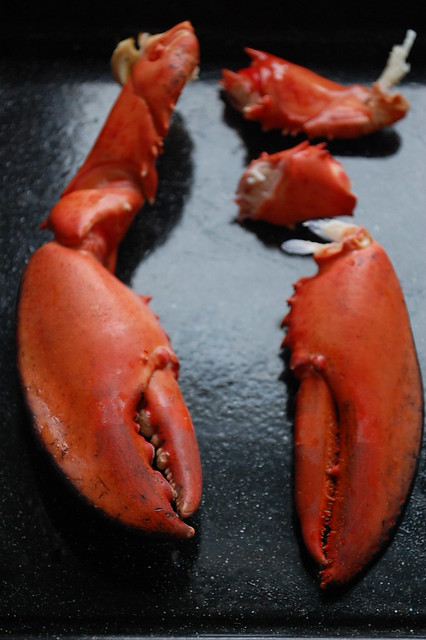 For the largest piece of the claw, crack the shell again, and remove the meat being sure to discard the thin, flat piece of cartilage.

Place the lobster, bellyside down on a chopping board and using the scissors, cut it in half lengthways, first through the middle of the head Then turn it around and cut through the centre of the tail.

Separate the two halves and remove the dark intestinal tract which runs along the top edge of the tail meat – there may be pieces in both halves so be sure to fish them out.

Pull out the stomach sac – a slightly clear pouch from the head and discard. Some people keep the roe and the tomalley (the yellow-green liver), removing them and any juices with a teaspoon. I wasn’t interested in doing anything with it this time so I discarded it as well. Remove any other loose matter from the head section (which I didn’t realise was meatless, prior to my dissection).

You’ll be left with the tail – remove it from the shells and refrigerate the meat in an airtight container till ready to use. Rinse and save the shells for mayo. 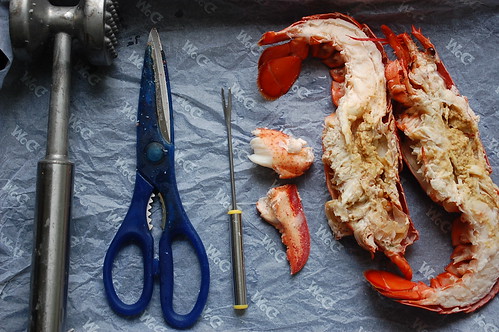 Then when you’re ready, serve the lobster cold (or warmed for a minute or two and no longer) some lobster mayonnaise, shredded lettuce and some slices of toasted bread. 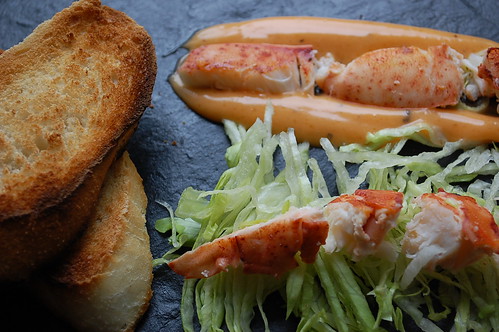 And building on my aioli-making experience, I decided to go the whole hog and make some roasted lobster mayo. Essentially, the lobster shells are roasted and crushed, then infused in oil with some spices. The result? A condiment rich with the flavours of the sea, bright with saffron hues and lobster orange. 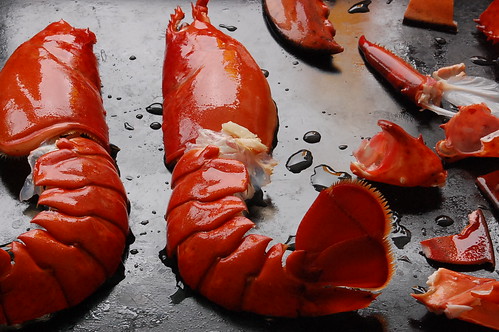 For the lobster oil

For the lobster mayonnaise 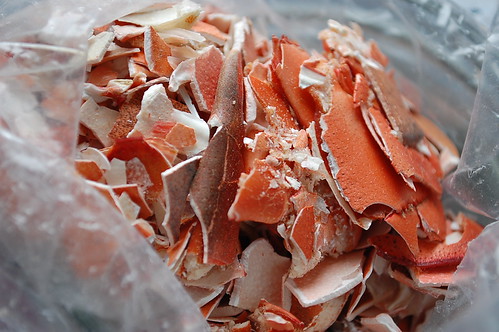 Add the remaining ingredients and enough grapeseed oil to cover. Seal the jar, place into a large saucepan and add enough water to come halfway up the side of the jar. Bring the water to the boil, then remove the pan from the heat and set aside to cool. 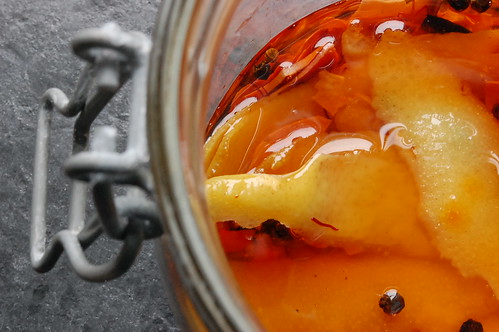 Strain the lobster oil through a fine sieve. 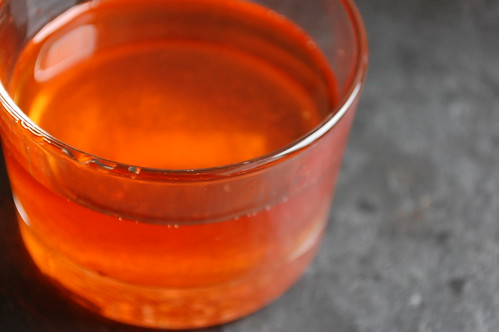 For the lobster mayonnaise, whisk the egg yolks, lemon juice, water and mustard together in a bowl. Gradually whisk in the oil until the mayonnaise has thickened. Season with salt and freshly ground black pepper. 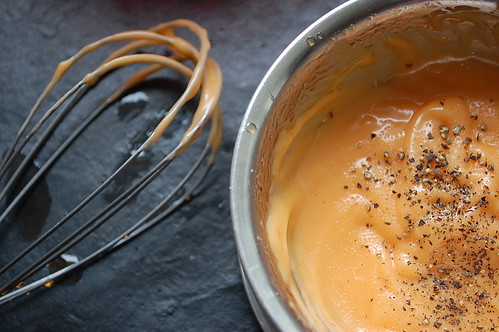 Are you a lobster lover? Can you share your favourite recipe? 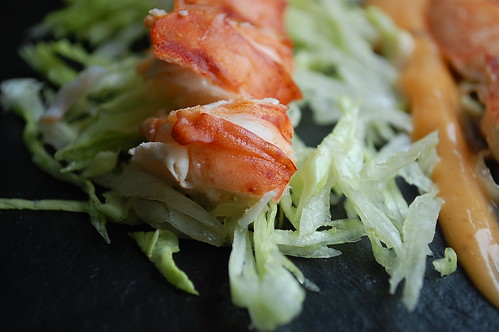 I enjoyed the experience of having Mr Lobster stare me down, watching the shell change from black to bright to pale orange….but it wasn’t the overwhelmingly delicious experience I’d envisaged, preparing it in my own kitchen. My husband liked it and thought it would be best grilled so that’s next on the summer cooking agenda. 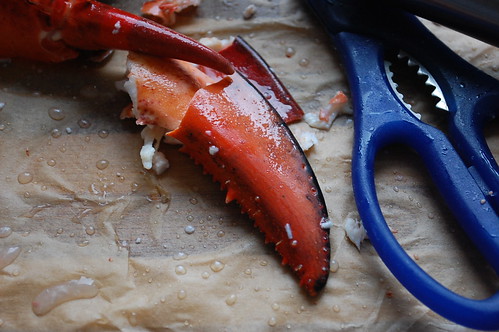 Thank you for being here for me, listening to my stories, teaching me a lot about food and life – it means a lot to me! 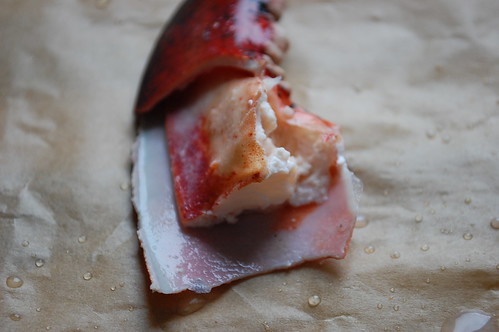