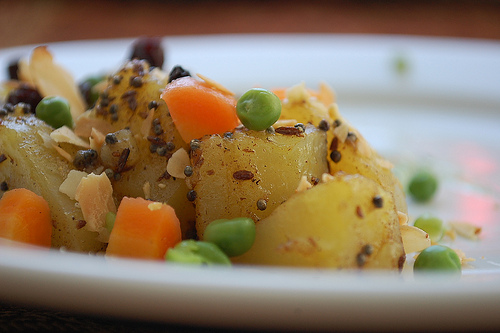 This post is dedicated to my friend Renu, who passed away in February 2011. She taught me how to make the most delicious coriander chutney two years ago and my life has never been the same. 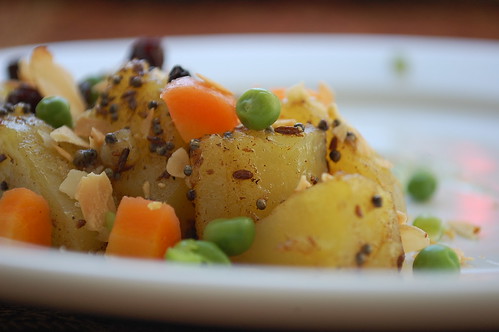 Her golden bangles arrived at my door – they travelled first class gently jingling on slim hands with perfectly manicured fingernails. Her singsong voice, full of a dimpled and cheeky smile called out, ‘Ozoz’. And finally seconds later, our faces connected. 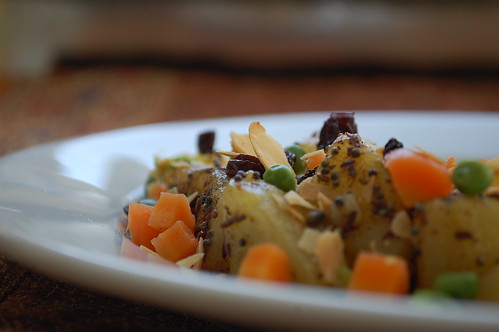 She walked into the living room that weekday afternoon in May when I gloried in having a week off work. Her arms were laden with the best gifts a friend can offer – food. Pots and jars and bowls, I was excited beyond words. She’d just finished cooking up a storm for a banquet she was hosting at hers – Chicken Tikka,  lamb rogan josh, pilau, and a small sack of cooked but frozen Samosas purchased from a trusted, authentic Indian restaurant. To accompany the samosas, she brought a small bowl of coriander chutney. I was intrigued by the way it looked – very green and incredibly fragrant. 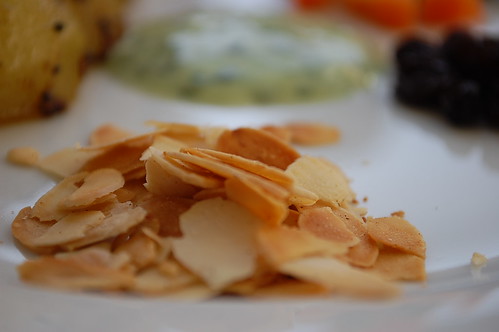 I didn’t know where to start – a little bit of this, a touch of that and a dip of the other. Till I ‘met’, officially met Mr Coriander Chutney. And don’t ask me why a tasty dip’s a he. My plate is piled high but it is the Coriander chutney that sets itself apart, from Sharwoods Green Label mango chutney, from Patak’s lime pickles. And it did so by virtue of its herbaliciousness. Herby and delicious. 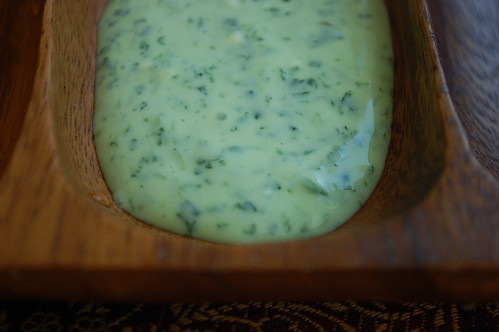 And so in one dip and I was blown away. It was herby with fresh flavours from mint, hints of green citrus from the coriander, a whiff of heat from green chillies and grated ginger, perfectly salted and sweetly balanced  with some sugar. Once she explained how it was made, I was further perplexed. Too easy, I said to myself. So good and so quickly made. 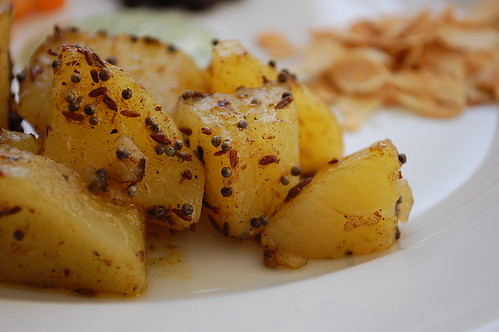 Of course our friendship was sealed. She told me she sometimes added yogurt to the dip to cool it down. And so do I sometimes. 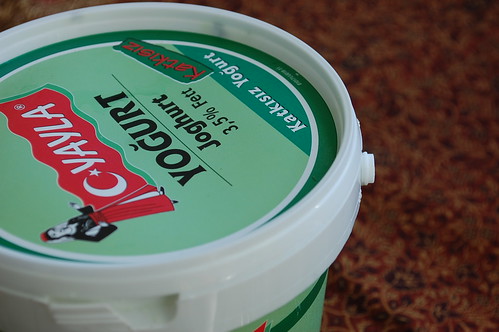 Other times, I stir it into mangoes and make a simple slaw – proclaimed by me as the best thing I’ve made, this year! 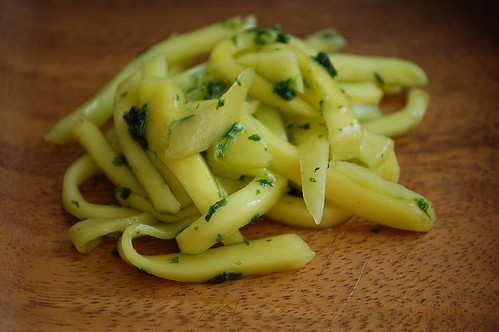 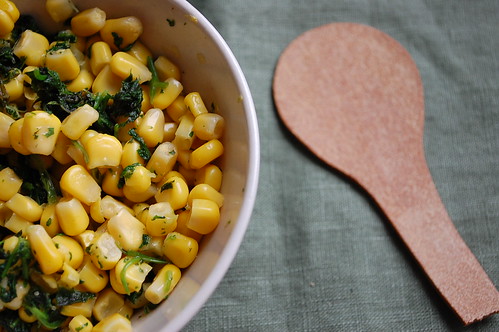 We were neighbours as well, till her family moved away at the end of January 2011. We had plans of visiting them in Belgium, only round the corner from us but all that talk was quashed when she took ill suddenly, two days into their stay in Belgium. She suffered multiple strokes as a result of a terminal illness. In the first week , I cried non-stop. The difficult week I had at work became inconsequential the minute we got the phone call. My friend, unbelievable. How was that possible? I’d seen her 4 days ago when they came round to say goodbye. We hugged and kissed and laughed and even joked. She said ‘You’ll have to come see us in Beligium’, to which I responded ‘Renu, ha. We were neighbours for 3 years and we hardly saw each other, is it now that you’re moving two hours away that we’ll see each other daily?’ We all laughed. Exchanged hugs. And the kids too. Her 7 month old daughter was in the car and her 7 year old son, laughing with my girls. And then they were gone, it was getting late….. 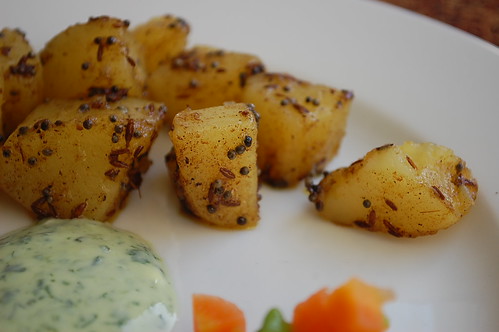 I cried for a month, everyday. I couldn’t believe it. She’d just had the daughter she’d been praying for after 5  years. Her husband had a new job, a promotion. She was going to live in the city of diamonds (Antwerp). I don’t recall crying this much in 2001 when my dad died, only a month after I returned from a 3-year stint studying in the UK. I felt and still feel shattered. She was so young, in her late 30s, she made me laugh with her dark silken black hair and when I ran out of Tandoori spice, she was the one who I went to begging…and she offered me a jar. I still cry for what could have been. That she knew she was dying. The pain her family goes through and how much we miss her.

But I know that there is hope and that we can’t begin to unravel the mysteries of life. I am willing to let go and trust in God for her, for us, that everything will be well.

Till then, everytime I make this chutney I will think of her and say a prayer.

Blog-checking lines: Jami Sorrento was our June Daring Cooks hostess and she chose to challenge us to celebrate the humble spud by making a delicious and healthy potato salad. The Daring Cooks Potato Salad Challenge was sponsored by the nice people at the United States Potato Board, who awarded prizes to the top 3 most creative and healthy potato salads. A medium-size (5.3 ounce) potato has 110 calories, no fat, no cholesterol, no sodium and includes nearly half your daily value of vitamin C and has more potassium than a banana!

Mandatory Items: To make any type of potato salad – hot or cold – that is healthy and delicious. We’d love to see all kinds of ethnic and cultural variations!

Put potatoes in a pan and cover with cold water and a pinch of salt. Bring to the boil and then turn down heat to simmer.

While potatoes boil, heat butter in a small pan and put in the crushed cumin and mustard seeds. Let heat up slowly, till mustard seeds start to fizzle and pop. Remove from heat, add a pinch of turmeric powder and the white wine vinegar, stir well. Set aside. 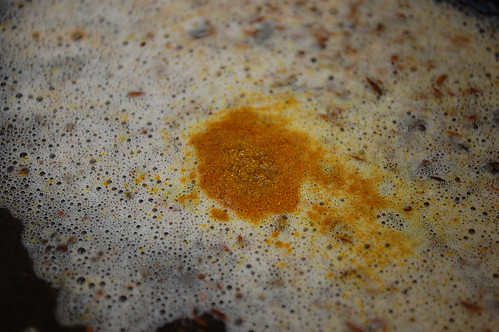 Test potatoes for doneness, using a sharp knife. When cooked, strain off water and cut the potatoes into smaller pieces, while hot. Pour over the butter and vinegar mixture and the cooked vegetables and gently toss to combine. Check and adjust seasoning to taste. Alternatively, you could make a platter of the potatoes, veggies, raisins, nuts and everything else….and ‘build-your-own’. 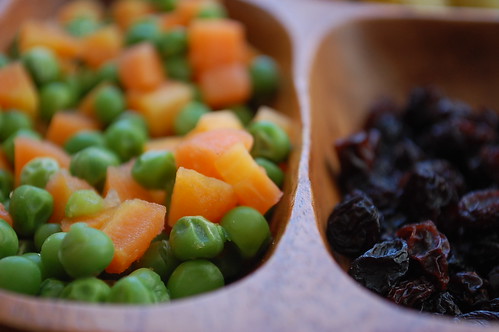 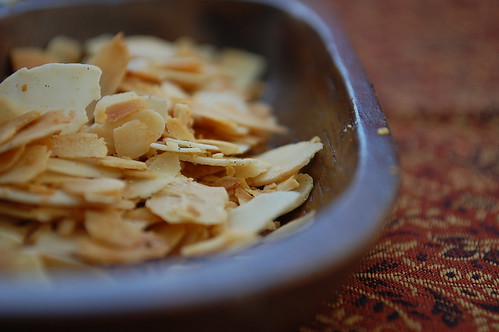 Serve with the coriander-mint dressing. 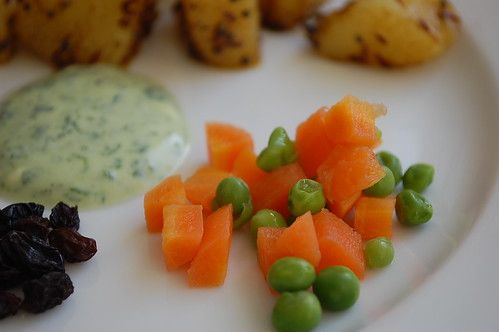 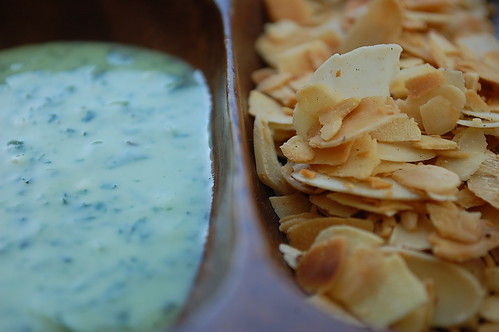 Place all ingredients (except the yogurt) in a mortar & pestle, blender or food processor and make a paste.

Stir in the yogurt and adjust sugar and salt, to taste

Refrigerate till ready to serve 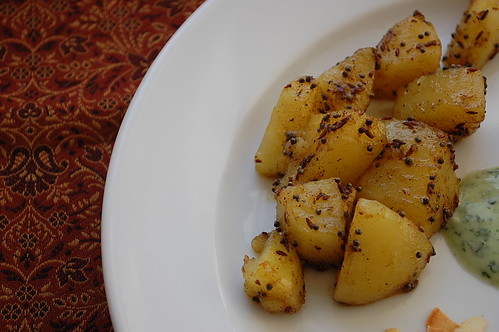