Mapping Nigerian-Norwegian Relations through the ages and there is a lot of information on the interwebs with some digging. I’ve put it all together in a timeline because specific events were time-bound and mapped key events. This is one of my favourite research pieces because it connects so much – from the state of nations – both Nigeria and Norway, inter dependencies, how certain ingredients become mainstream and much more. Anyway, here’s what I discovered.

Wind-dried herring, known as stockfish, is a prized delicacy in Norway but with its small population (4 million) and massive fish stocks, the country produced far too much for its own consumption. Oddly enough, the only other people partial to stockfish were Nigerians (population 63 million). Because it was relatively cheap and the dried fish did not rot in West Africa’s hot, humid climate, there was a brisk trade between the two nations; Source – The Independent, Ireland

The connection began with the British…

In the early 1900s, there were associations which governed trade and managed relations between Nigeria and Norway.

This was abandoned years later. 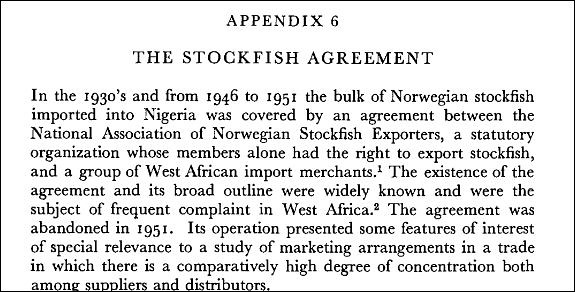 In the ’80s, as part of austerity/ trade policy measures by General Ibrahim Babangida, the then Nigerian head of state, stockfish imports were banned. 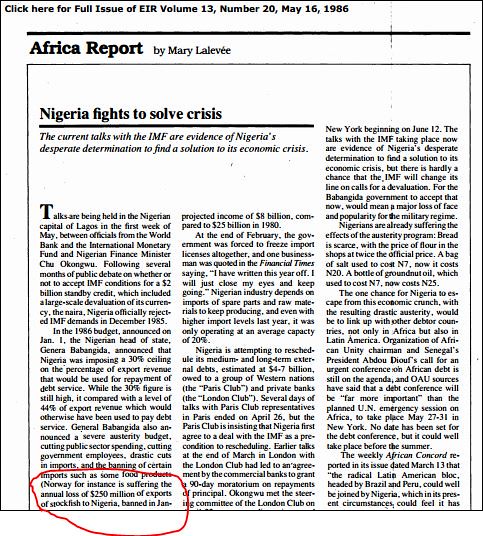 The ban led to many cases of middle men trying to bring stockfish into Nigeria, anywhere but from Norway, like the case of James “Danger” Beirne.

He must have executed one of the earliest 419 deals – Advance Fee Fraud in which he and a consortium agreed to buy ‘$21m worth of stockfish in three shipments. Essentially there would be no cash payment from the Irish until after the second consignment was at sea. But the commission, the 15 per cent of the value of the cargo, would be paid “up front” before each consignment left Tromso.’

You have to read the rest of the incredulous story here!
So yes, this is a short summary of key milestones in Nigerian – Nordic Relations.