by Kitchen Butterfly on February 2, 2013 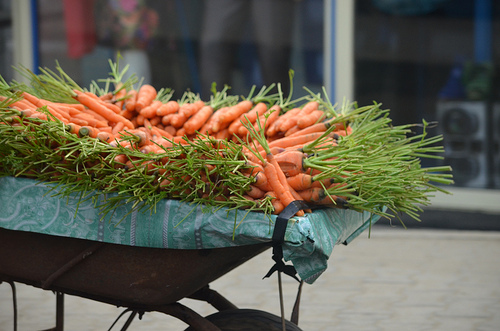 Some day soon, I’ll have a record that’s complete. I’ll know exactly when to lie in wait for mangoes, buy the best pineapples and feast on Ube, with corn.

This is the start of that catalogue.

The Nigerian climate, like most tropical countries consists of seasons, rainy and dry. Obviously, there are differences from north to south, in terms of the length of each season.

In the south where I live, our dry season begins in  October and lasts till early March with it being somewhat cold in December. The rest of the year is wet, save for a short period in August, known as ‘August break’ when the rains abate for a few weeks. The produce at the start of the year is varied, with a range of fruits and vegetables. Interestingly, it is the wheelbarrows on the streets that portray  the season.

This time of year, one is likely to see carts full of bright, orange carrots. At this time, the man on the street is likely to eat his carrots as snacks, rather than incorporate them into salads and cooked dishes. The carrots are young, fresh and are kept hydrated throughout the day with sprays of water. 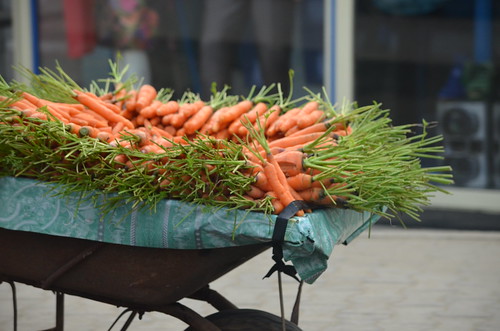 One is also likely to see Udara, also called Agbalumo or cherry, but it bears no resemblance to cherries as we know them. Instead, I am reminded of loquats. Both fruits share the same tan-orange colour, a certain tartness, large and shiny mahogany seeds – they could be related. While I found the loquats a bit uninspiring, I get excited about Agbalumo. 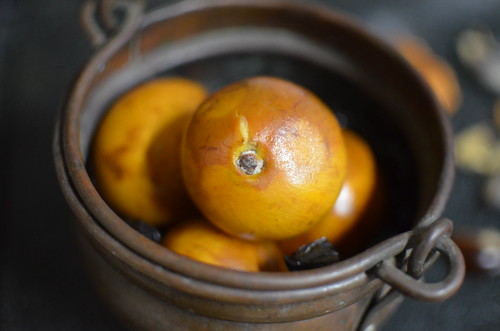 The best, safest agbalumos have the stalks still in the top, reducing the chance of fruit bugs burrowing in

It can be sweet, and sour at the same time; juicy with rich orangey-red flesh and seeds covered with creamy pulp which one sucks/eats off. 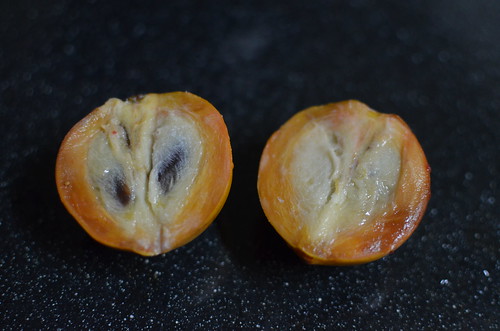 A split Agbalumo, unconventionally cut in half with a knife

Finally, for those who have time and energy, the skin can be chewed and transformed into gum. 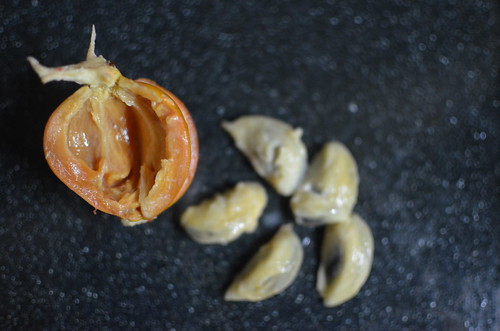 Be mindful of the juices though which leave permanent stains – just like cashew fruit…so I would keep my best whites away.

I’m going to give you a short lesson on how to eat Agbalumo. No cutlery required.

First of all, you take a clean, washed ‘cherry’

Photo 1: Press it gently at the top, where the stalk is, so it splits, oozing out delicious juice which you lick.

Photo 2: Out pops the stalk, which you lick too and set aside, giving you your first view of the seeds

Photo 3: You take the ‘cherry from hand to mouth’, pressing the base which pushes up the seeds. You eat the seed, one after the other if you like, tearing off the creamy pulp, and eating it bare.

Photo 4: Once you’re finished with the seeds, you can split the cherry in half, and chomp on the orange flesh, or loosen the flesh by pressing and massaging the skin, so it releases the flesh. This is eaten, till all that’s left is the flesh and seeds. You can continue to eat the skin if you want to make ‘chewing gum’! 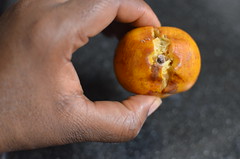 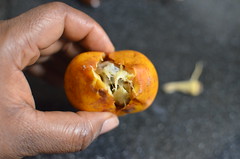 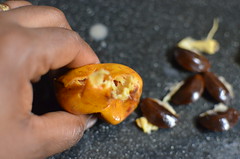 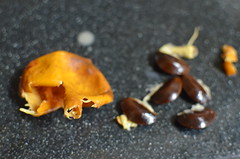 BOTANICALLY called Chrysophyllum albidum, white star apple belongs to the Sapotaceae family. It is distributed throughout the southern part of Nigeria. In Southwestern Nigeria, the fruit is called agbalumo and popularly referred to as udara in Southeastern Nigeria. Chrysophyllum albidum is a popular tropical fruit tree and widely distributed in the low land rain forest zones and frequently found in villages.

The fleshy pulp of the fruits is eaten especially as snack and its fruit has been found to have higher contents of ascorbic acid than oranges and guava. It is also reported as an excellent source of vitamins, irons, flavours to diets. The seeds are also used for local games or discarded.

Chrysophyllum albidum fruit is common in both urban and rural centres especially during the months of December to April. The fruits are not usually harvested from the trees, but left to drop naturally to the ground where they are picked.

We love sugar cane – the sweet stalks of Saccharum officinarum that resemble young bamboo poles, except these aren’t hollow. 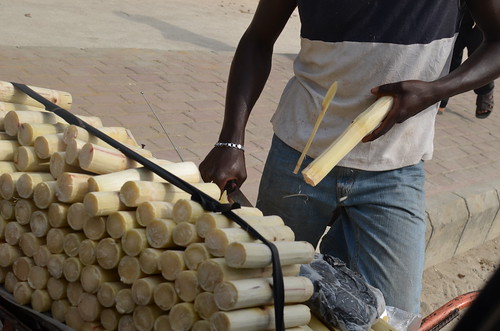 Saccharum officinarum and its hybrids are grown for the production of sugar, ethanol and other industrial uses in tropical and subtropical regions around the world. The stems and the by-products of the sugar industry are used for feeding to livestock.

Sugar cane comes in a variety of colours – red, purple, yellow and green being the most common. They are rather tall, woody stems, a metre or more high, cut down into smaller segments for consumption. Typically, the sellers cut the sugar cane into 20-30 cm segments. These segments are made up of long, soft sections, and shorter, harder connecting portions. The softer portions are chewed, and sucked on for juice before discarding, whereas the harder connecting pieces are discarded right away. 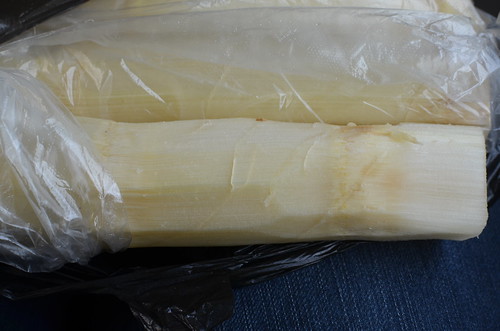 Wikihow has a great page on ‘How to eat a sugar cane’.

The sugar cane seller has already taken the first step to clean the sugar cane by lightly peeling off the coloured, outer bark leaving some of the hard bark so the sugar cane stays juicy. Once purchased, he takes off the final layer of hardness and slices, on the slant/bias all around the sugar cane which makes it easy for the buyer to extract pieces of cane which they’ll proceed to chew, suck out sweet sap which dries sticky, before discarding the fibrous residue. 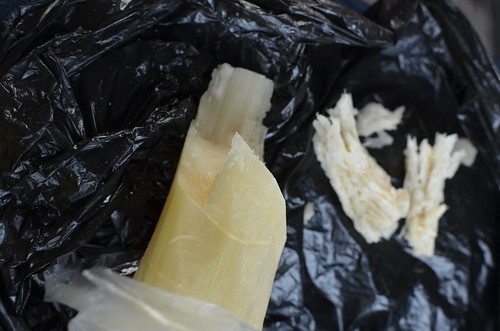 I love the wedges of watermelons that are to be found on trays all around my city. They are vibrant well set reds against rinds of white and green skin. Oh, they aren’t seedless though. 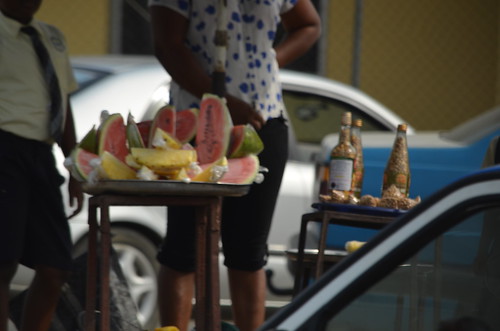 I enjoy them just cut up, and juiced. As I guess do lots of people.

Like other fruits, you’ll find them in wheelbarrows or stuffed in a car! 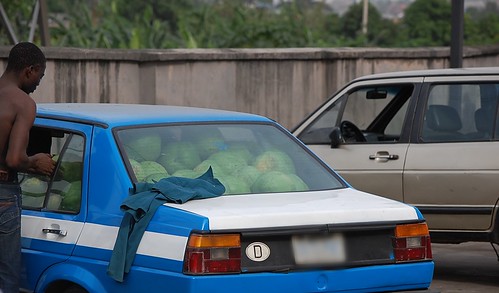 Yam sellers also do the wheelbarrow thing too. Fresh, heavy tubers, marked with green paint (probably for identification in barns) stand up in barrows pushed by young men. We love yams with pepper soup, fried and roasted. Even boiled, and served with salt and butter, which melts and creates a delicious sauce. And boiled with sugar, to make candied yam. I could go on, and on for yams are amongst my favourite foods ever. 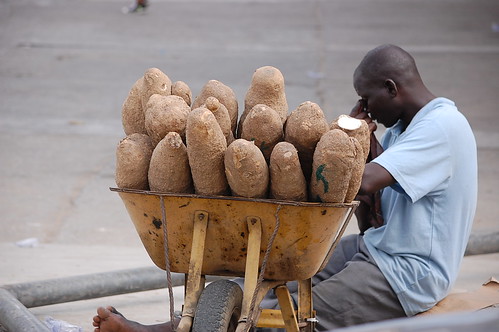 This is also the period for delicious, juicy citruses, from lemons to oranges and limes. 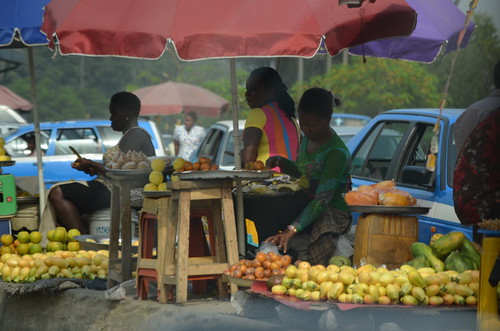 So yes, some fruits are seasonal but you’ll also find other table fruits, which are available year round, like bananas; pawpaw and garden eggs – edible, out-of-hand relatives to the aubergine.

I hope you enjoyed this introduction to some of this season’s produce from Nigeria, south of the Sahara.

Have you encountered any of this, not very common market fruits?

Passionate about food in its entirety – cooking, eating, dreaming, writing and photographing it. ‘Traveller, by plate’, using foodways – the social, cultural and economic practices relating to the production and consumption of food to explore Nigerian cuisine & the world for ‘food is more than eating’.
You might also like
Seasonal Nigerian Fruits and VegetablesNigerian Cuisine

Marketplace: Tomatoes. By The Basket Load
Kitchen Butterfly is a Winner!