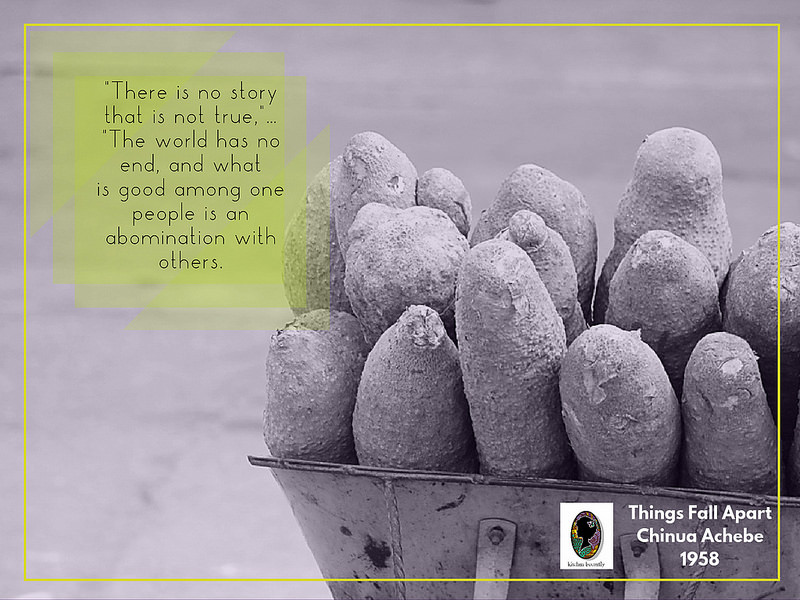 There are one hundred mentions of Yam – one hundred. 100. C (Roman Numerals) in Things Fall Apart (1958)  – the most widely read book in modern African literature. Written by renowned writer, the late Chinua Achebe, the novel is set in late 19th century Nigeria, pre colonisation. It follows the life of Okonkwo, a wrestling champion on a journey that touches  parenthood and tradition, pride and accident, culture, history, human peculiarity and more, all this in a way that educates and entertains. 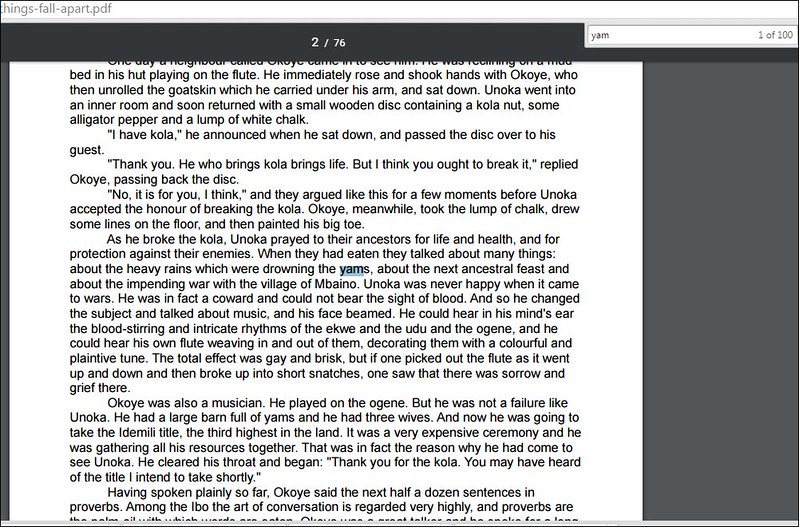 I find it really endearing the way we write about food, and culture. Most importantly, it is fascinating to learn and see how writers associate certain meals and dishes with events in books. Like Jollof Rice. And Yam. And Plantain. Did I mention Suya?

In Chapter 5 of Things Fall Apart, we read about the preparations underway for this feast. There is so much history and culture and belief in these words – about earth mothers and giving, about letting go of the old and embracing the new, about community and fellowship, about seed time and harvest. Proof that everything about life is…on the plate.

‘The Feast of the New Yam was approaching and Umuofia was in a festival mood. It was an occasion for giving thanks to Ani, the earth goddess and the source of all fertility. Ani played a greater part in the life of the people than any other deity. She was the ultimate judge of morality and conduct. And what was more, she was in close communion with the departed fathers of the clan whose bodies had been committed to earth.

The Feast of the New Yam was held every year before the harvest began, to honour the earth goddess and the ancestral spirits of the clan. New yams could not be eaten until some had first been offered to these powers. Men and women, young and old, looked forward to the New Yam Festival because it began the season of plenty–the new year. On the last night before the festival, yams of the old year were all disposed of by those who still had them. The new year must begin with tasty, fresh yams and not the shrivelled and fibrous crop of the previous year. All cooking pots, calabashes and wooden bowls were thoroughly washed, especially the wooden mortar in which yam was pounded. Yam foofoo and vegetable soup was the chief food in the celebration. So much of it was cooked that, no matter how heavily the family ate or how many friends and relatives they invited from neighbouring villages, there was always a large quantity of food left over at the end of the day.

I particularly like how folklore is woven into the stories – how beautifully scenes are painted with words, so vivid you can imagine yourself seated at the table, feasting on pounded yam

The story was always told of a wealthy man who set before his guests a mound of foo-foo so high that those who sat on one side could not see what was happening on the other, and it was not until late in the evening that one of them saw for the first time his inlaw who had arrived during the course of the meal and had fallen to on the opposite side. It was only then that they exchanged greetings and shook hands over what was left of the food; Source: Chapter 5, Things Fall Apart

I cannot imagine that tower of Pounded yam!

Oh well, if you haven’t read Things Fall Apart, you’re dulling and only I (well,….and a few others) can help you correct this travesty – with a free copy – thank you interwebs!