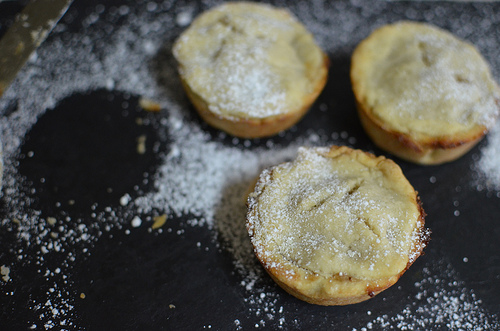 I may not have le cordon blue or any ribbon at all proclaiming me master pie maker but I am determined to raise my children on pie, with pie and knowing pie.

My childhood was satisfactory, thank you very much. Even without pie as we know it.

All that pielessness is being addressed, corrected.

I’ll have you know that I’ve baked more sweet pies in the last 6 months than I have in the entire preceding decades, thanks to 3 great women – Antonia James, a food52er who introduced me to ‘Humble Pie’ and its author Anne Dimock, who motivated me to seek more and find I did,  and the book of ‘Pie’ by Angela Boggiano.

And this is what I’m referring to when I talk pie – sweet, dessert pies, of fruit, and booze and berries. 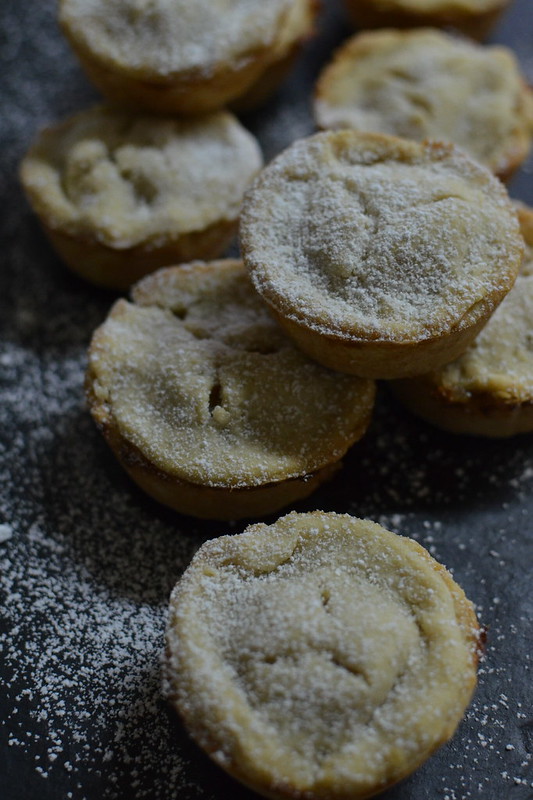 Good things sure do come in threes. 3 children, 3 visits to New York City. 3 women and pie.

See, pies have always been my Everest. Too hard to climb on a whim. To scary, too risky – much too difficult for the judge and jury would hold no mercy. Strange from someone who’s conquered recipes, 17 pages long.

But dare suggest she make simple pie crust….. then watch her run away.

Yet I do the checks.

Till I met Miss Anne of Humble Pie, who so enthralls me with her childhood tales of pie making. From apple picking, to rotten apple disposal and the perfect flour-fat ratio for crusts.

She makes pies doable. And to ensure my accountability, I read portions of her book to my children. To prepare them for their pie-eating future.

For I want my children to have pie.

Why? There’s a world of learning and travel that can be packed into a crust. A certain sophistication, confidence and elegance in those who are conversant with crust. Flaky, buttery, sweet. Those who have the courage and boldness to ask ‘Can I have another slice of pie?’, dessert fork in hand. Who can conquer he who seeks more? Pie? And is able to ask for it?

And this is where I salute Miss Dimock for she goes the route I like – she talks about pies in the freezer. Of which I currently have 1. That’s a number that’s far better than none. Its a cheese crust pastry, stuffed with apple-calvados filling. Set in a pie mould and well-wrapped.

That’s only one pie I’ve shared with you.

The son and I craft the most gorgeous mini apple pies, stuffed with a filling like in the one-frozen-pie version but petit, reminiscent of Christmas mince pies.

The daughters favour apple tarts and berry ones too.

But it’s the spiced rhubarb crumbles that currently have the medal. From Edinburgh to Port Harcourt, these bakes have become legendary.

Each one devoured (well, save for the cherry for which I used pie filling, which was too runny, which ended up trashed.)

B, my pie’ner in pie (pie makers in arms) has been exploring various version of the bake. So much so that her husband, a foodlover…though not wont to have conversations about food accosts us both one day, on our return home for work – we carpool.

He is perplexed as to the varied names pies and tarts bear. He bemoans the complexity of describing them when simpler terms and phrases exist.

In a week he’s heard pie, tart and crumble. And he doesn’t know which is what. Our explanations confuse him on day 1 but by day 3, he gets it. As we drive home from work, he shares his proposal to the pie world and frankly it makes some sense: 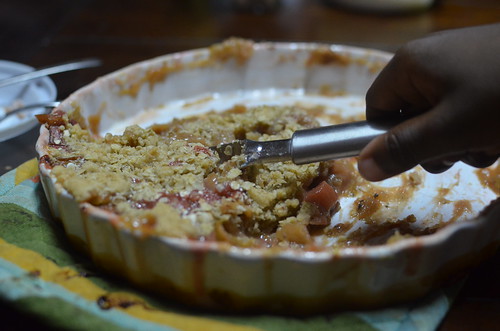 Why not call a pie a pie, that has a top and bottom crust.

We smile, B and I. He’s come a long way…. and probably would LOVE ‘Its Not Easy Eating Green’s’ ‘A Simple Dictionary of Fruit Desserts’. Which I too LOVE! For there, she shares all the details which show up the desserts for what they are.

I don’t scare him into eternal submission by bringing up the subject of buckles and grunts, of slumps and ….. and definitely not of pandowdy. You didn’t hear me mention swamp pie or slab pie and cobblers, or Bettys.

On my part, I need to make up for pies not baked! And I have.

I took a gorgeous recipe from food52, and topped it with an oatmeal and flour crumble. Multiple times. Winner every time.

Then I attempted the ‘classic’ combination of strawberry and rhubarb. And Tiger & Strawberries recipe is a godsend. It may not look pretty….but it was oh so good!

So yes, I’m living the life, living a life of pie and loving it too.

The pie recipe I share with you is adapted from ‘Pie’, by Angela Boggiano.

But first a short story on hope, loss and restoration. And a bottle of Calvados.

The cheapest bottle of Calvados was all I could afford. I liked the sound of the name anyways ‘Pere Magloire’. I liked it much better than the 500 euro bottles behind the glass doors. 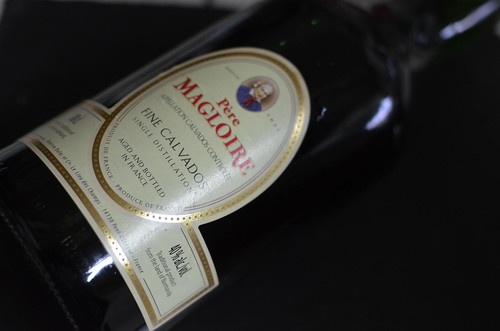 And it set me back a mere 20 euros plus.

I held it gingerly all the way from the duty-free shop to the airplane. I thought about my apple pies as we flew over the ocean, seated in ‘cattle class’.

And when we arrived Port Harcourt at 8 pm that night, I still had it in hand while we waited for the runway shuttle to take us to the Arrivals hall. I was tired and set my bag, with the Calvados on my suitcase. It was unstable. I was well aware but still….I was tired, and had managed a few thousand miles with no ill happening.

I set my bag on the suitcase. It fell and it broke.

I watched the runway soak up my apple brandy, drink of it greedily and I could not scream or shout. For I had done it to myself.

All that remained of my drink, of my almost 30 euros was shards of glass, white netting and a plastic duty-free bag.

Just as I stood, in shock, wondering whether to cry, or to look for a way to save what was left….my phone rang. It was my sisters – older and younger.

I shared my tragedy. They were in London, passing by Paris the following day.

Yes, they offered to get me a new bottle and guess what? They did. And we lived happily together forever.

In a life where I’ve made it up to them, with pie. 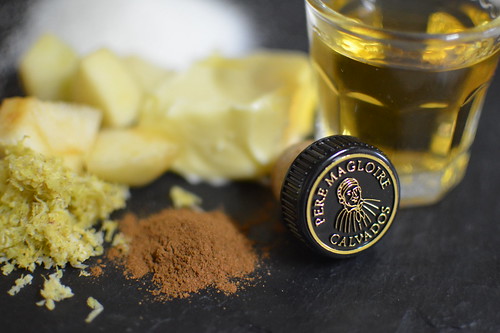 In a food processor, combine the flour, butter, lard, sugar and salt. Pulse for 30 – 40 seconds till the butter is broken up. The texture will be uneven, with small and large bits. This will change once the water is added.

Add the water, by the tablespoon, starting with 3 and run the food processor for about 10 – 20 seconds. You may need to add more water – I typically end up using 6 tablespoons of water to get the texture I like.

The ‘dough’ is ready – not when it forms a ball but when the mixture is like bread crumbs, usually about 40 – 60 seconds of running the processor.

Turn the mixture out onto some clingfilm/plastic wrap and then shape into a disc.

Don’t worry if the dough doesn’t look ‘evenly textured: the bits of butter and flour bake up to create a nice, crisp-crumbly crust.

Allow the wrapped dough to rest in the fridge for at least 15 minutes, and up to 2 days.

Melt the butter and add the sugar, cinnamon, and lemon zest. Allow to cook until fragrant, a minute or two, stirring all the time.

Add the apples and Calvados, stirring well and let cook on medium to low heat for 10 – 15 minutes until the apples have softened, and some of the liquid is reduced.

Using a stick blender, puree half the mixture and then stir well so the mixture is of coarse texture. Stir in the cream and then set aside to cook completely.

Taste for sugar and spice and adjust to suit your desires. 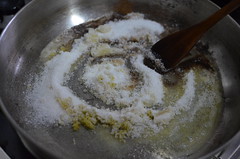 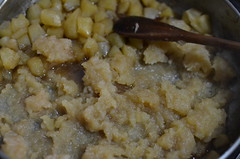 On a lightly floured surface, roll out the dough to about 3mm thickness.

Using a cookie cutter – plain or crinkled, cut out 12 discs about 4 inches in diameter, and 12 smaller discs for the covers.

Place the larger discs into the holes of a 12-muffin tray and fill with the cooled apple mixture.

Brush the rim of each mini pie bottom with water and top with the smaller pastry discs.

Pinch the rims together to seal top and base. Then make 3 small slashes on the top of each small pie – to create vent holes.

Bake the pies for 25 – 30 minutes in the centre of the oven, until the edges are golden. 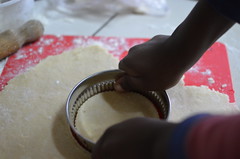 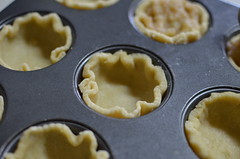 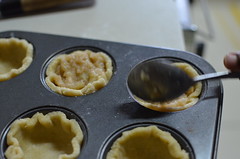 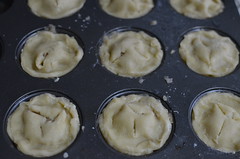 Allow the pies to cool in the tray for 10 – 15 minutes and then remove onto a rack. 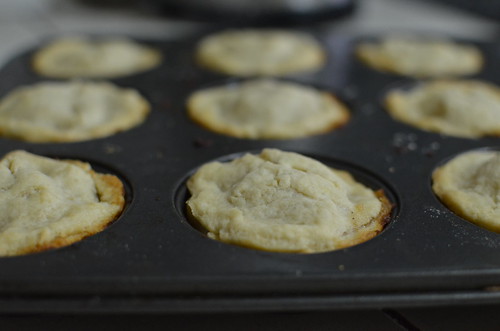 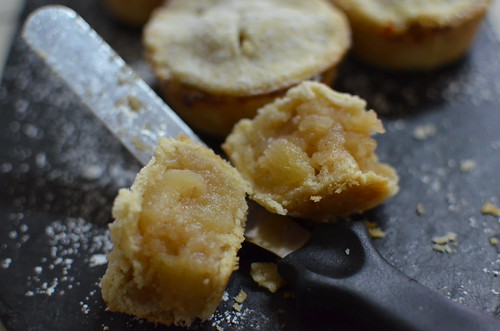 My son was so incredibly proud of his achievements and so were his sisters, his Dad and I!

And thus began our pie journey.

A journey that has seen me rustle up pies in seconds.

Now it is such that I can get home from work, and in that hard hour – the one sandwiched between the rapidly setting sun and homework-dinner-bedtime….I can get home and still rustle up a pie. Or tart.

Like this one. A cheddar cheese crust layered with Meyer Lemon caramel, topped with pastry cream, leftover from a weekend’s Boston Cream Pie and topped with slices of pink, fragrant apple slices, crisp to eat and juicy to bake. 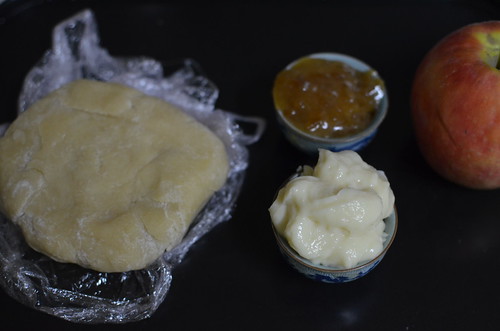 Its even possible that while dinner is being eaten, this beauty is busy baking…… 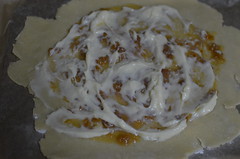 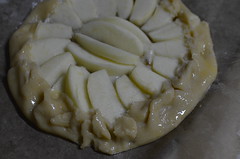 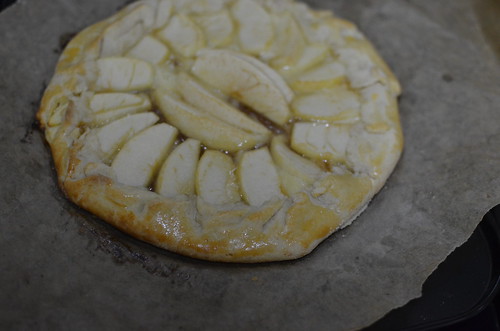 And the Everest is no more. Gone forever, making way for new challenges.

But for now, I’m happy to be a heroine, for myself. And to feed my children pie. So that their stories tomorrow will not be pieless.