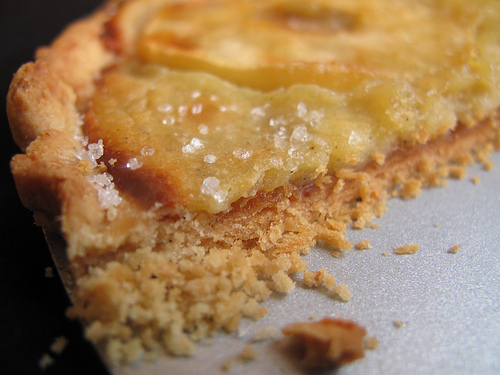 When I think of orchards, I always see sunshine, blue skies and windfalls – loads of apples littered about the base of a big tree with wide branches and leafy greens somewhere in Italia. I see grandpa with his golfer’s hat, sitting at the table, his elbows resting on the red and white gingham tablecloth while his wife, grandma works with her hands and voice, giving instruction to the rest of her crew on which apples should go where, for what and by when. The whole scene is wrapped in family fun and laughter. 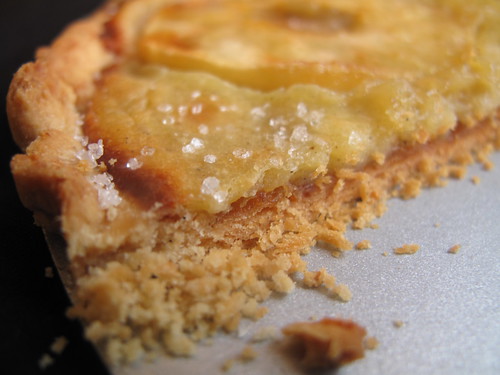 So imagine my excitement when my daughter’s class had a trip to an apple orchard planned. I volunteered to go straight away. 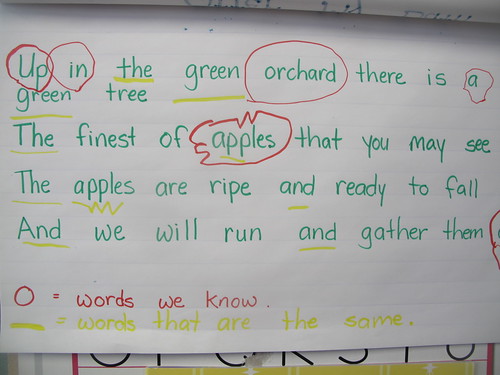 On the morning of our trip, the sun woke up with us, enveloping everything in its path with warmth and light. I ticked one item off on my bucket list. But….just in case, because we live in the Netherlands where 4 seasons are not at all uncommon in one day, we packed up our rain gear. We arrived at the Olmenhorst – the Elm estate, named after the famous Dutch Elm which grew on the estate in the years before the Dutch elm disease ravaged woods and forests across the world. We departed in a large grey 50 seater bus and disembarked without a hitch, One by one, we got off the bus and our tour began. 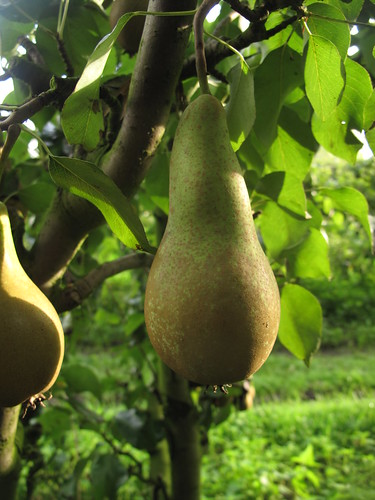 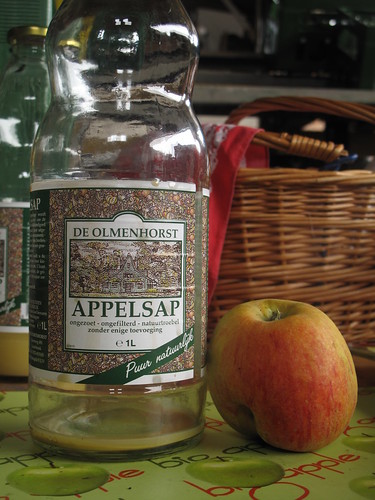 We wandered through pear trees and pig sties, across cheese factories and goat pens. We stopped to admire the rows and rows of pear trees they had planted. Comice. Concorde and even chocolate ‘ones’, which smelled like wine and which we didn’t dare taste. Our lady guide spoke to us of the difference between pear and apple trees in the way they grow. Pear trees have branches which grow up, reaching for the skies and apple trees have branches spread out wide, a small umbrella for….the tree trunks perhaps. 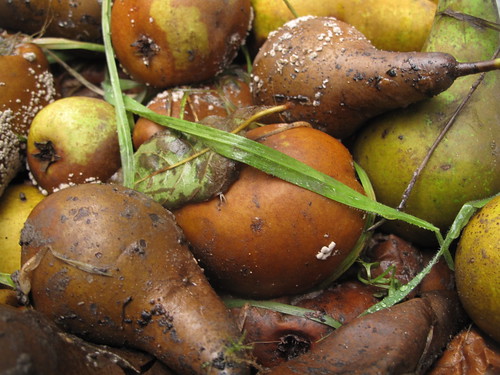 And then we came upon the apples, trees also laid out in vine-like rows. Small trees too, only an arm or leg taller than me, and I’m a mere 5 4”. Nowhere as high as the Italian apple trees of my dreams! We saw adopted trees, names and signed for by kind donors. And on the way to picking our very own apples, we happened upon a brood of roosters, escapees from a summer festival, now seeking refuge and hiding, avoiding capture with red crowns around the green grounds. 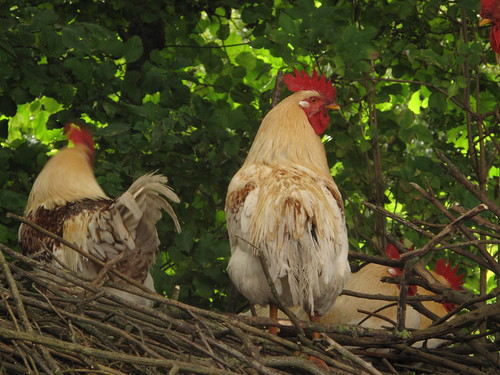 The sun was still shining when we reached the Elstar trees and our guide gave us the picking rules. Pick no purple ones only the red – green ones. 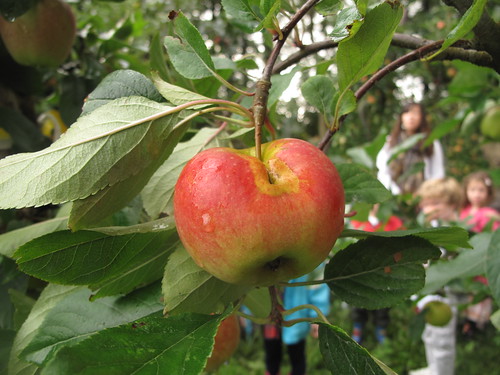 To pick one off a bunch of many place your left hand at the base of the apple, cupping its bottom, and using your right hand, lift you apple of choice upwards and in a clockwise manner, twist it off till it comes loose. She showed us the falcon nests, the preferred ‘orchard cats’ and spoke about how they were the mice-catchers. Their philosophy at the farm was as ‘au naturel’  as possible. We walked past windfalls and ‘golden’ apples. We admired, rather tirelessly the rotting fruit hanging on some trees. Well I admired them while the kids turned their noses up in disgust. 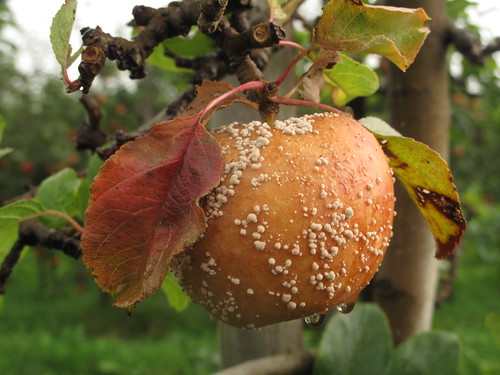 And just as we were unleashed on the trees, guess what happened? Oh yes, rain. Lots of rain, heavy rain, in the style worthy only of Dutch rain poured out on us by the bucket – and you know that heaven’s buckets are 100 times fuller than earths. So yes, we all got soaked. But we all had our apples. Wisselvallig (fickle) as the weather was. Thankfully, we escaped to a cool shed where we sipped on delicious, organic apple juice….from the farm and where the adults paid for their own produce. I got two kilos of apple for a couple of euros.  While the kids lunched, I slipped away to the winkel (shop) where I saw mushrooms growing on tree trunks and ‘truffle potatoes’, in addition to lots of kitchenware. 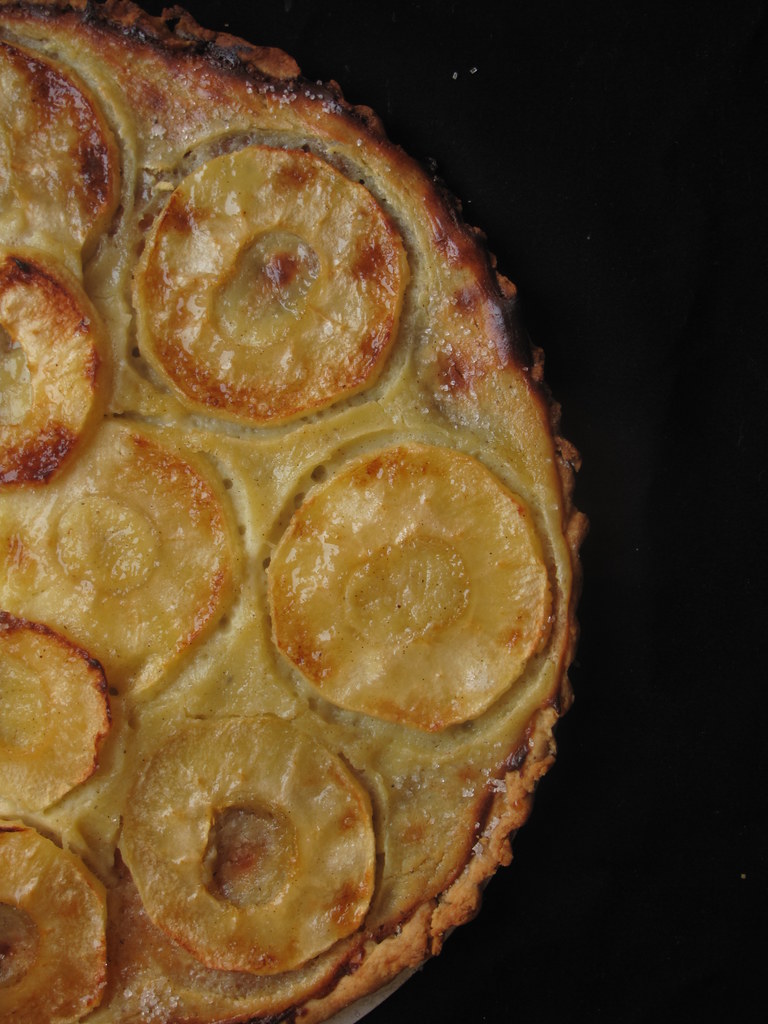 At home, I began by making some pectin from whole apples, just to see if the resultant pectin stock would have more gelling capacity. It didn’t seem to matter much when I did the spirit test. With the pulp that was left from the apple flesh, I made some apple curd, modifying my lemon curd recipe. I added the cooked flesh of 2 apples, some apple juice and the other usual suspects – eggs, sugar and butter. The end result – a very apply tasting condiment that would make a great apple butter substitute with its smooth autumn flavours. 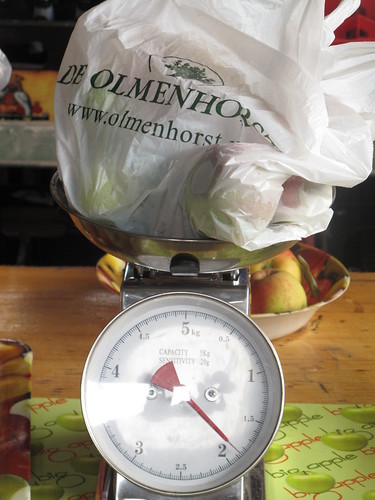 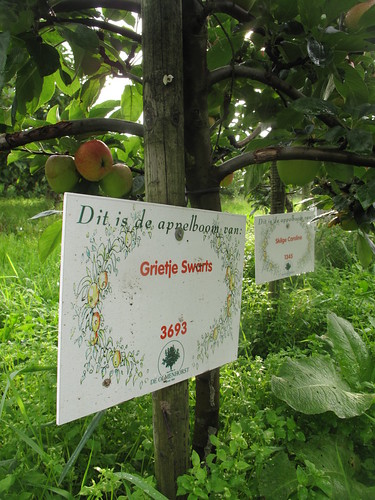 When it was time to toss the coin between apple sponge cakes and an apple tart, it was tails and so began the journey to make a thin crust ‘Tarte aux pomme et sucre’. I made a thin shortcrust base. While it chilled in the fridge, I began making my crème patisserie. Eggs, sugar, milk and cornflour later, it was ready and I set it aside to cool down. Then came the rolling out of the pastry, blind baking and leaving it to cool. On top of the cooled pastry bottom, I spread a thick layer of apple curd, topped with the crème patisserie and finally rings of freshly peeled and sliced apples. It went into the oven, baked and finally was finished off with a sprinkling of sugar and a blast under the grill to get the caramel juices flowing. 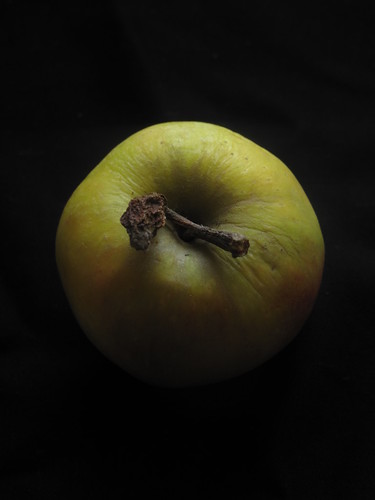 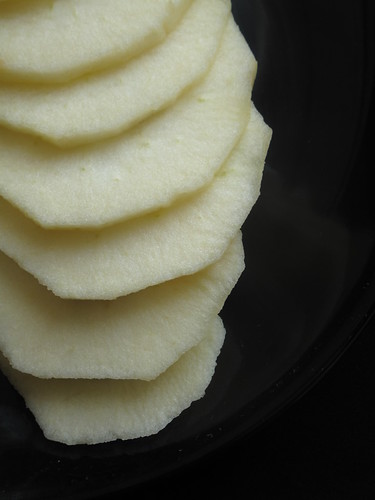 Simply served with a scoop of the finest vanilla ice-cream . Well not really the best ice-cream but it worked nicely too. 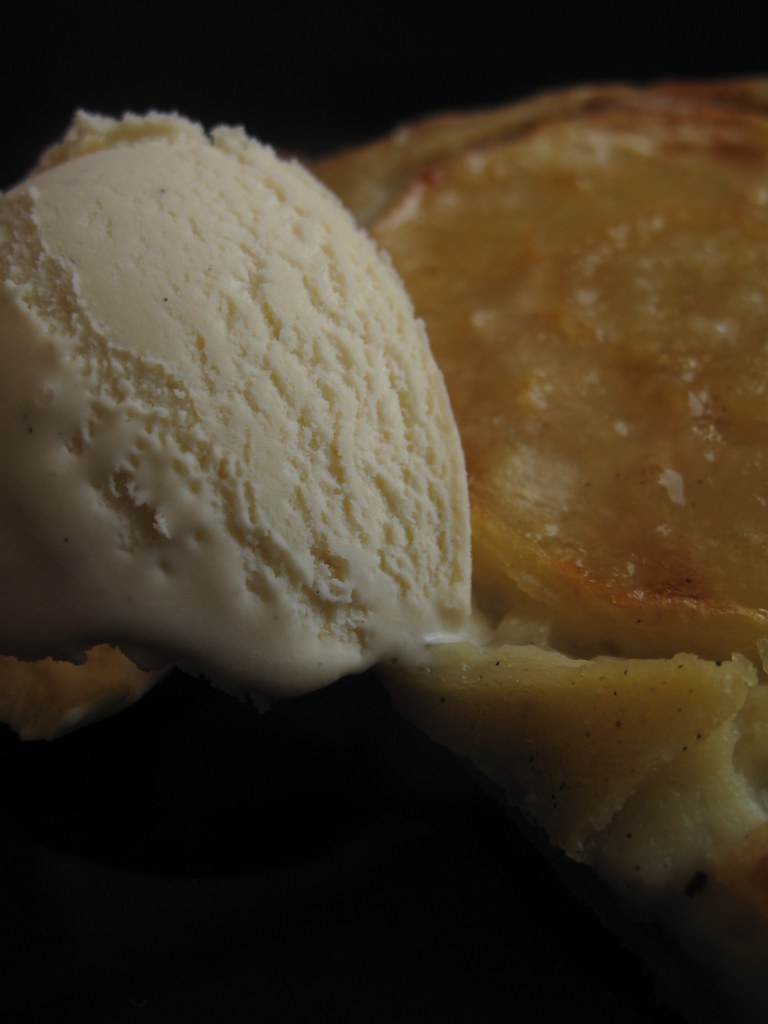 And on its own. it tasted superb too. 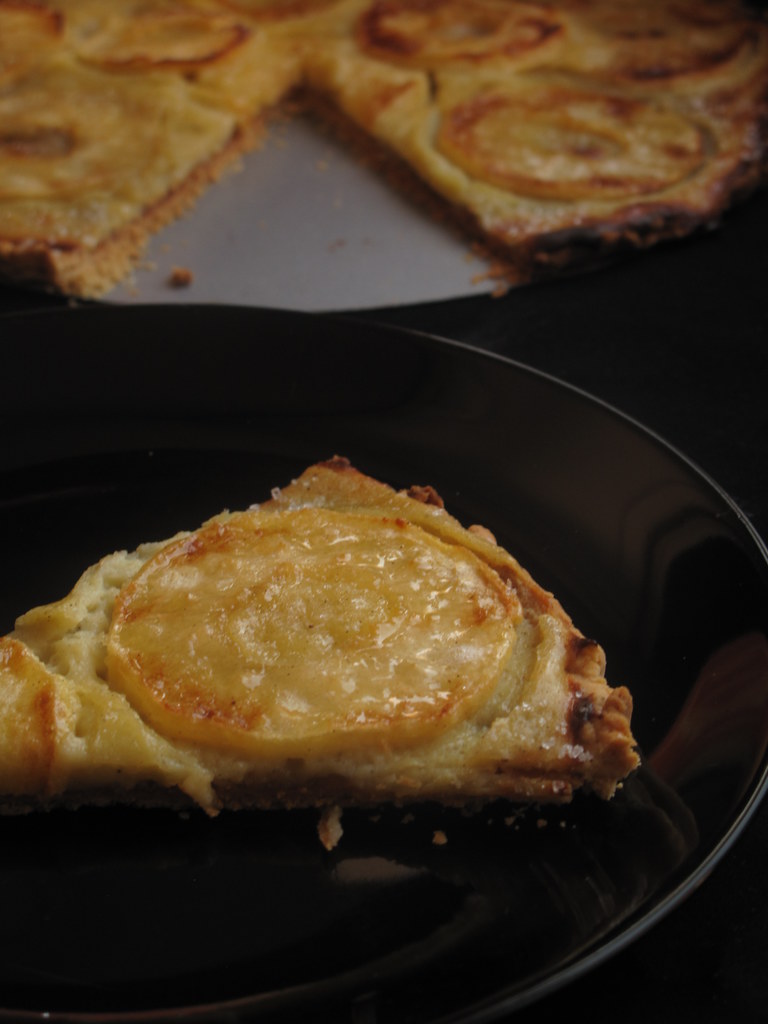 Proclaimed divine by a visiting cousin and uncle. Husband. Myself and again in that order. The base was thin and crisp, very crumbly. The filling of curd and crème made a good bridge and lent some substance to the piece de resistance – the apples. A success, that ensured a repeat the day after for my cousin. And us.

It’s good to be home. I’ve missed you too.

Makes enough for one tart

To make the pastry, put the sifted flour and the salt in to a bowl. Using a large hole grater, grate the frozen butter into the flour. Then combine the flour, butter and cold water by cutting in using two table knives till a loose dough is formed. Using your hands, gather the mixture and form into a ball. Wrap in clingflim and place in the refrigerator for at least 20 – 30 minutes to chill, and up to 4 days refrigerated.

After the resting time, pre-heat the oven to 220 deg C. 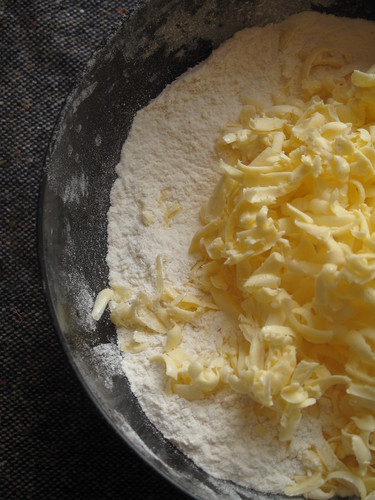 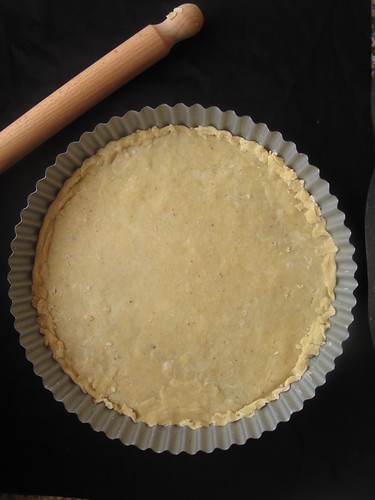 Roll out the dough thinly on a clean, floured surface and use it to line a buttered 20 – 22cm flan/tart tin. Prick the base lightly with a fork, cover with a piece of greaseproof paper and fill with baking beans/rice. Place in the oven for about 10 minutes, then carefully remove the beans/rice and grease proof paper. Allow the tart base to just brown for a couple of minutes. Remove from the oven and allow to cool. 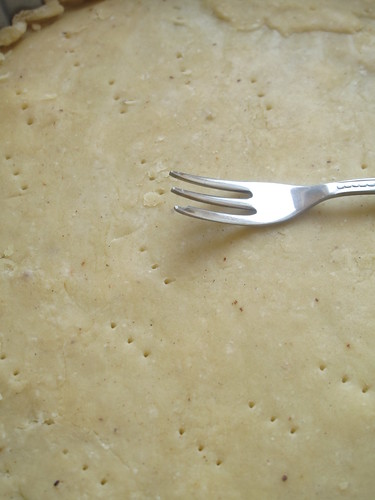 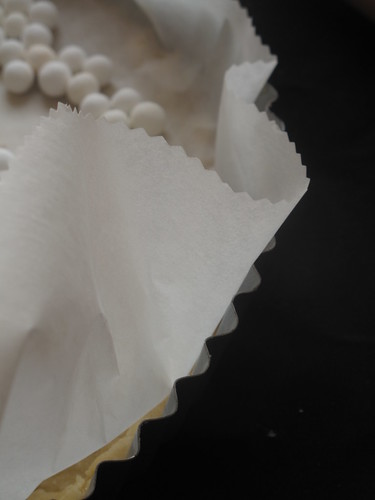 Once cold, spread some apple curd, followed by the crème patisserie. Finish off with the apple slices, trying not to overlap them. Bake for another 12- 15 minutes at 200 deg C. Then turn oven settings to medium -high grill and place about 6 inches down from the heat source. Remove apple tart, sprinkle some sugar over the top and grill till slices caramelise and brown, a few minutes. 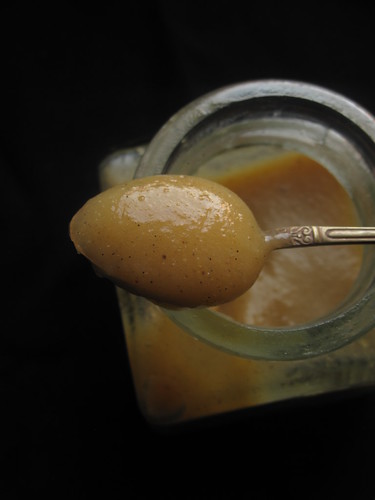 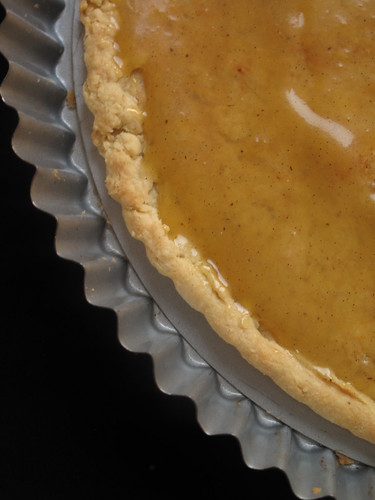 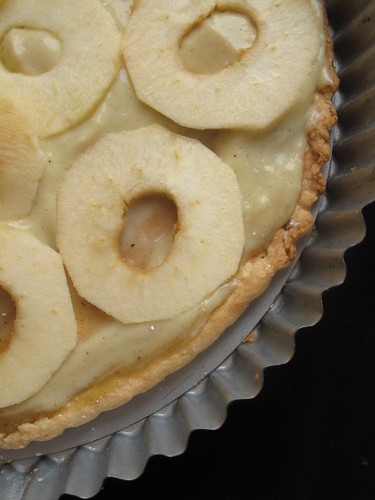 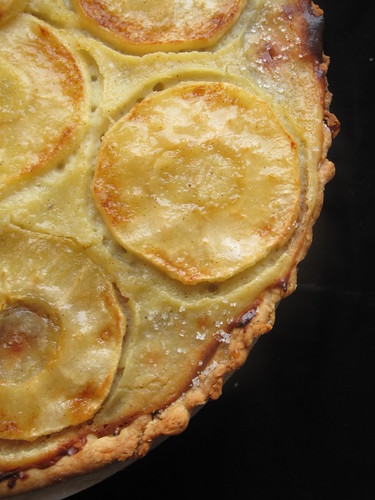 Remove from heat and serve hot, warm or cold.

Whisk eggs in a bowl. Sieve into a pan – to remove thick bits of yolk and add the sugar to egg mix and stir till it forms a soft mixture.

Put pan on very low heat on your stove top – continue mixing and then add the pureed apple pulp and juice.

After 2-3 minutes, start adding butter, 1 chunk at a time, mixing well till butter is melted before adding another chunk.

After 10 – 12 minutes, it should be ready. Don’t worry if the mixture looks thin, it will thicken once it has cooled.

Put in clean and well washed jars ( I don’t sterilise the jars for my curds because they end up refrigerated. I do make sure they are well washed though!)

Once it has cooled down, refrigerate and use within 2 weeks

Makes enough for one tart

Mix together the egg yolk, sugar and cornflour in a medium heavy-bottomed saucepan. To this, whisk in some of the milk. Place the saucepan over low heat and cook, whisking all the time while adding the rest of the milk in a steady stream till all used up. Add the vanilla extract as well and continue stirring.

After about 10-12 minutes the mixture should be thick, free of lumps and beginning to bubble. Don’t worry if you have a few lumps, you can pass the cream through a fine-mesh strainer. Transfer to a bowl and cool to room temperature. Cover with plastic film and refrigerate till ready to use.

Have a great week. More on the adventures of note, coming soon!

Passionate about food in its entirety – cooking, eating, dreaming, writing and photographing it. ‘Traveller, by plate’, using foodways – the social, cultural and economic practices relating to the production and consumption of food to explore Nigerian cuisine & the world for ‘food is more than eating’.
You might also like
apple recipesautumn recipesBakingRecipes

How to make Pithiviers