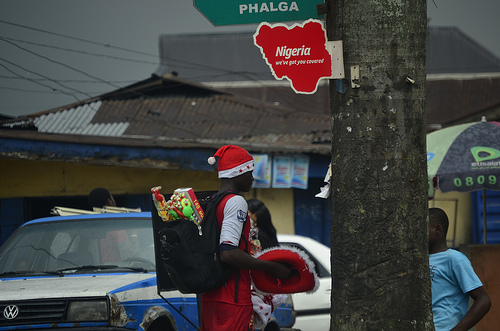 So the Harmattan winds should be here. My mornings should be chilly, foggy  and with dust to boot. Its the season when nights should be cool and lips parched. The season of northern trade winds blowing from the Sahara.

But ’tis only some of that here. Where I am at the moment. Some tropical thunderstorms and warmish weather and only a few cool mornings!

The Harmattan is late. Uncharacteristic. Still we prepare for Christmas and its festivities.

Which is why I’m on the hunt for a Christmas challenge.

The kids want to make another gingerbread house….but I’m not sure I want to.

If push came to shove, I’d do it to keep them happy. ‘Best Mama in the World’ and things….

But I’d like to do something else so if you have any ideas….shout.

I’m thinking Croquembouche. Its on my bucket list. But that’s not the only reason why. 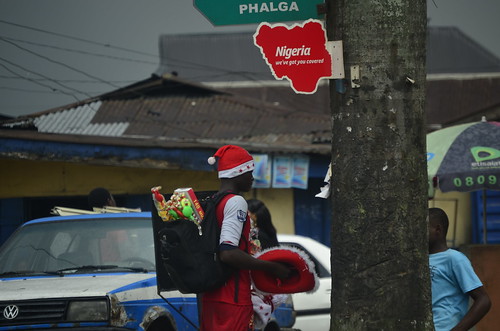 Its grand. Even if I might have to make do with a mini-grand version!

Would definitely be a challenge.

And an absolute delight to eat. Feast.

It is true that I can no longer pretend that Christmas is a long way away.

Even if I wanted to, the streets I plough daily will not allow.

They are full of Christmas everything. Trees. Lights. Action. Hats that twinkle, and elf hats. 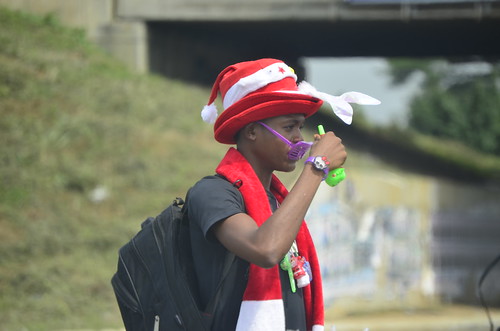 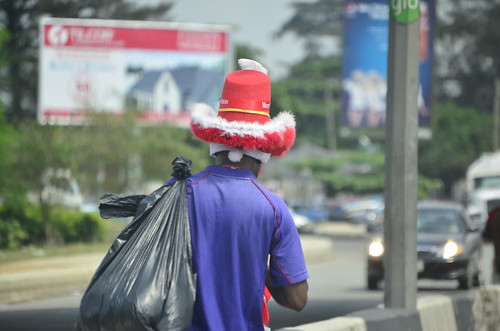 I don’t know what we’ll eat for mains – chicken, turkey, fish….but that’s the least of my worries at the mo – even though I’m thinking.

First there’s the tree to put up, and then there are presents to buy….or be bought. Cookies and cakes to be baked. Late mornings to be had. Cups of tea and cardamom coffee. Bread pudding.

But first, yes there are fruits and vegetables in season, calling my name: Carrots and Oranges, Pears and Sweet potatoes too. Cherries aka Agbalumo, and lots of watermelon. Cocoa. Pineapples.

All ferried on aged enamel trays and creaking wheelbarrows. All in full view to see and purchase.

Whenever I use the word purchase, I laugh in remembrance of some advice Chimamanda (famous author et al) offers to writers, learning to write. Even though I don’t remember where I read or heard it.

She says ‘Don’t purchase when you can buy’.

As in keep it simple. Don’t try to be all sophisticated by using big words…..

And that’s a lesson, right? For me too.

So yes, there are hundreds of things to see and buy on the streets. Fruits, vegetables and Christmas hats. I’ll start at my beginning.

For weeks and months I’d seen these fruit on trays. Once I asked and was told it was ‘pear’. Ube. I didn’t make much of it for I assumed it was the same purple pear I knew.

But then a few weeks ago I had time to get up close and personal. And realised these were a totally different ‘pear’ from what I thought. So I bought some. From a smiling lady, ferried on a red-rimmed enamel tray. 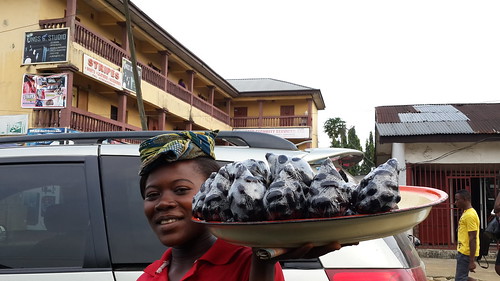 Season: the first fruits start to appear during  the rainy season, between April and September. I recall first seeing them in October but they are still available today.

Provenance: South-east and North of Nigeria (particularly in a place called Panksin in Plateau state, in the same region as Jos)

Uses/products: Eaten out of hand as a snack, Oil

Shape & Size: Small, fruit that appears in two distinc shapes – long spiral and short round. Larger than an olive, smaller than a date.

The fruit are sold in tiny cellophane bags, which contain a dozen or so, already cooked fruit. 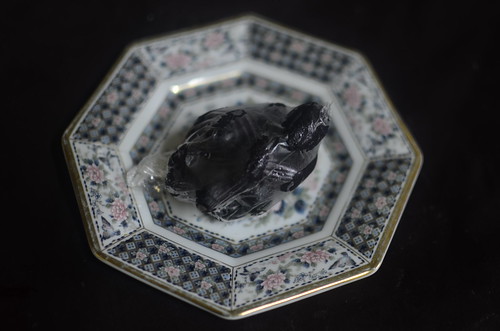 They are fairly small fruit, about 3-4 centimetres in length.

Larger than a regular olive, with a similar if longer shape.

They are smaller than a dried date.

And are much smaller than their compatriot, Ube.

They have a dark green pulp, not as light and vibrant as the yellow-green of Ube. Yet they taste almost exactly the same. They have that ‘avocado’ creaminess yet the Atili has quite oily notes.

I think of Austrian pumpkin seed oil. For this oil has the same qualities. Viscous. Thick. Green. And slightly reminiscent of ‘crude oil’

I didn’t do much with it but chow. Chomp. Interesting little fruit!e. She

A big thank you to Natural Nigerian, who’d written a post about it which led me to discover its name!

When I first saw these, I was with my younger sister. We were both convinced  they were ‘native mangoes’, from which we derive Ogbono seeds.  The lady selling called them ‘Plums’. With confidence and knowledge I got them.

Finding information about it was easy enough….when I searched for ‘Nigerian orange plum fruit with spiky seed‘….because the seed is a weapon! Spiky as ****. As I found out. But lived….to tell tale here!

Season: first seen by me in December.  In Hawaii –  November to April; in Tahiti, from May to July. In Florida – fall to midwinter

Provenance: South Pacific. Native to Melanesia through Polynesia, but has has been introduced into tropical areas of both the Old and New World. Popular in Jamaica.

S. dulcis has been introduced into tropical areas across the world. It was brought to Jamaica in 1782, and it is cultivated in Panama, Cuba, Haiti, the Dominican Republic, Puerto Rico, Trinidad, and eastern Sucre in Venezuela.

The United States Department of Agriculture received seeds from Liberia in 1909, but it did not become a popular crop in the US. Nevertheless, it is grown in South Florida as far north as Palm Beach County

Uses/products: Eaten out of hand as a snack – raw – skin peeled, pulp consumed, seed – spiky seed avoided. Also cooked in preserves, soups and sauces. Made into Jams in Fiji, pickled in vinegar to make acharu in Sri Lanka and many others.

Uses, excerpt Wikipedia: The fruit is made into preserves and flavorings for sauces, soups, and stews. In Fiji it is made into jam. In Samoa and Tonga it is used to make otai. In Sri Lanka, the fruit is soaked in vinegar with chili and other spices to make the snack food acharu.

In Vietnam the unripe fruit is eaten with salt, sugar, and chili, or with shrimp paste. Children eat the fruit macerated in artificially sweetened licorice extract.

In Jamaica, it is mostly considered a novelty, especially by children. It can be eaten with salt or made into a drink sweetened with sugar and spiced with ginger.

In Trinidad and Tobago, it is curried, sweetened, salted, or flavored with pepper sauce. In Cambodia it is made into a salad called nhoum mkak. In Suriname, the fruit is dried and made into a spicy chutney, mixed with garlic and peppers. 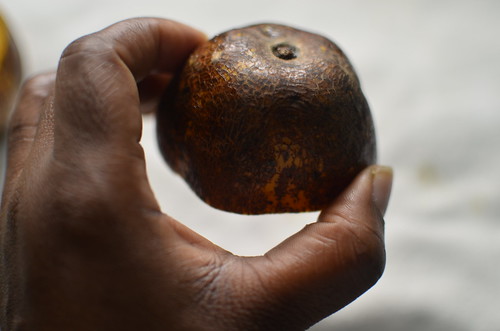 Parts of the skin have networks of ‘cracks’, similar to desiccation cracks – only way for me to describe it just yet. 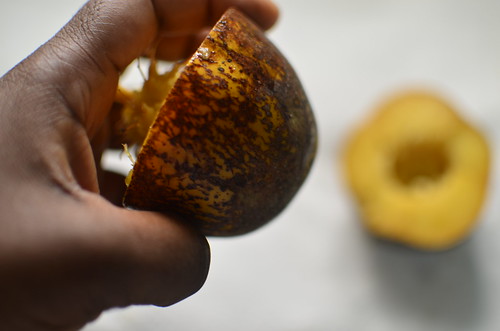 The fruit has 5 distinct ‘sections’

The flesh/pulp is bright orange and fibrous… 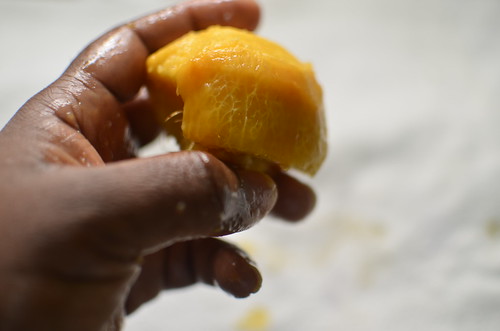 ….and it surrounds a single, hard spiny seed. 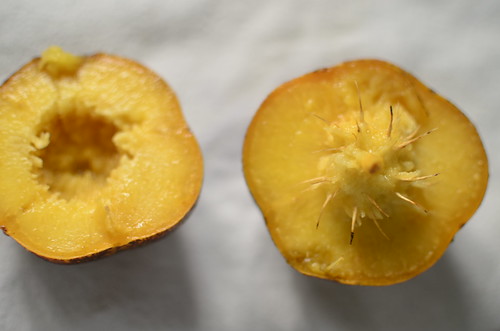 Which deserves respect. Whether you like it or not!

Taste profile: Crunchy, sweet and sour flesh reminiscent of pineapple, mango and a hint of apple. It has a musky scent – somewhat melon, a bit of pawpaw, faintest trace of ‘queen of the night’. To me..

To remove the seed, leave peel on for grip then peel/cut it as you would a plum using vertical slices all across the circumference of the fruit.

Pull slices away from seed.

If you take the skin off first, the fruit will be too slippery for you to hold and therefore you will be unable to make slices and take the seed out, unless you eat the fruit like an uncut apple (this is how I eat it);Hello Grenada, See You Later America.

In my second, third and 4th attempts at removing the flesh, I cut the fruit in half cross-wise, then twisted it like you would do for stone fruit or avocados thus separating the halves. Then I finished off my using a spoon to remove the pulp, which is currently being refrigerated. What I intend to do with it….I know not yet!

There is no shortage of ideas….obviously.

My friend N had a basket of the finest Jos tomatoes. Tomatoes I hadn’t had a chance to study. She graciously let me have two, extolling their virtues, of sweetness and no bitterness, of taste and redness.

I was intrigued by their anatomy. 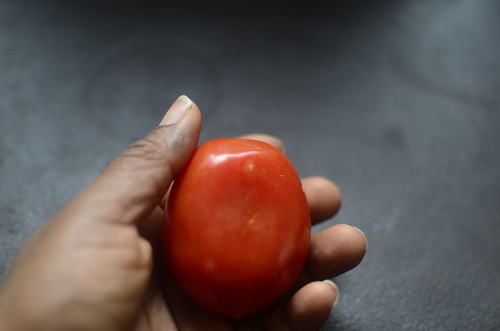 Flat on two sides, as though squashed. Like Flat Stanley. But not. This time, by nature’s own doing. 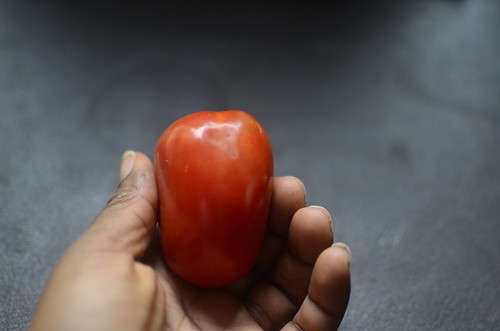 I had two so I decided to see what they looked like in section.

Here’s what I discovered. These aren’t the juiciest tomatoes. 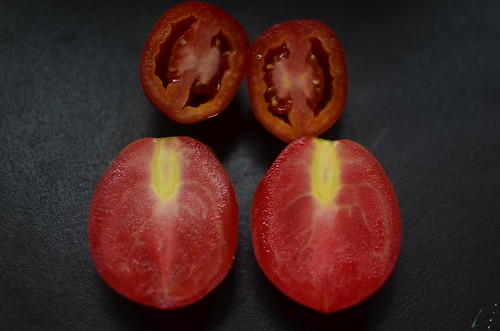 A slice crosswise reveals the same – some seeds but not a lot of juice. 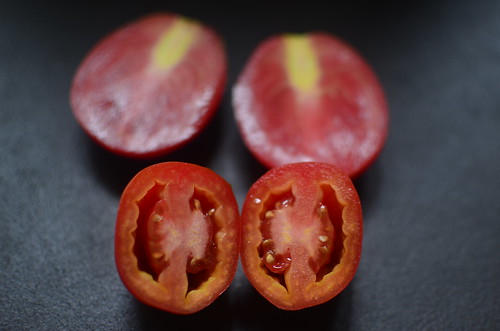 I proceeded to scoop out the ‘flesh’ and see the strawberry I found. Embedded in the centre, the heart of the fruit. Just a smattering of seeds enclosed in a ‘sac’. 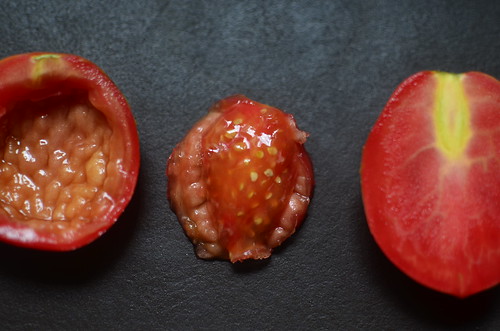 I tasted it – very tomatoey, with barely a hint of sweetness. 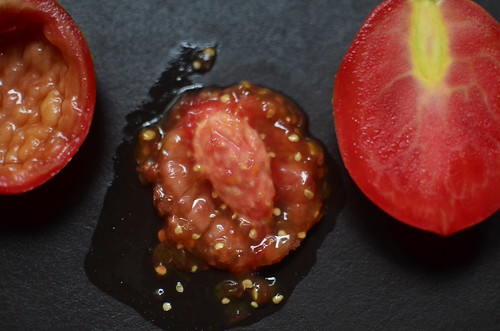 And a cup, perfect for stuffing. For its firmness. 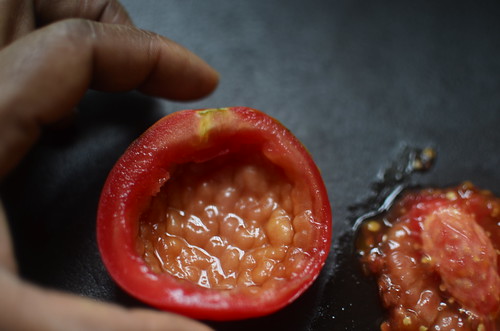 I can’t wait to cook with them. And no, not these 2 which I’ve cut up but the ones I’m sure to buy and try!

Carrots are back in full force. Cheaper, fresher and more orange than ever.

Best seen, bought from, and admired in wheelbarrows. 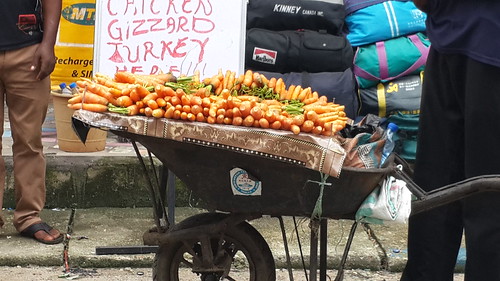 And top down. See how well arranged they are – by size, and therefore by price. He makes, as do most of the other carrot sellers, a frame of carrots – heads pointing inwards and tails outwards. The centre is full of small, ‘scrappy’ (but fresh) carrots. 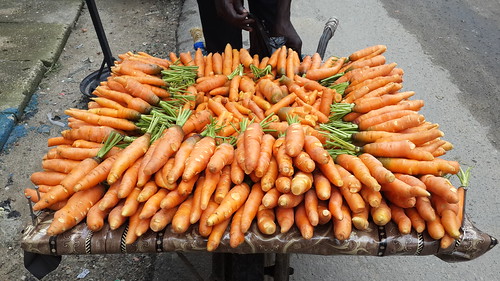 Sweet potatoes too are abundant. The white variety, with beige skin are everywhere.

These are similar in taste to the popular orange American sweet potatoes.

Not quite ripe or ready, as evidenced by the green rim near the mouth! I’ll give it a few weeks more. 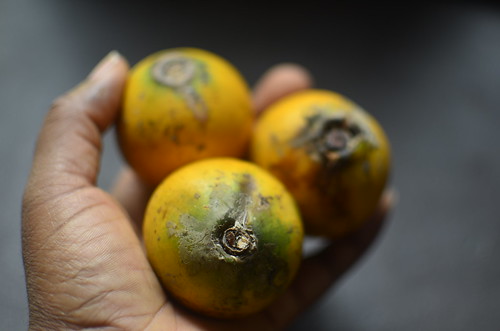 There are sooooo many other fruits and vegetables thriving at the moment. 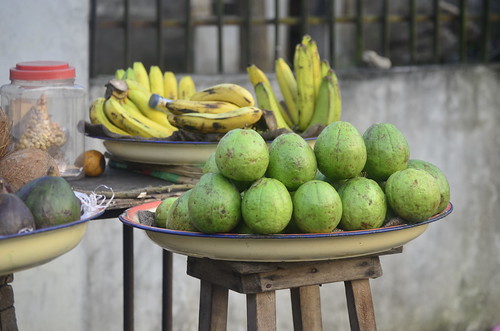