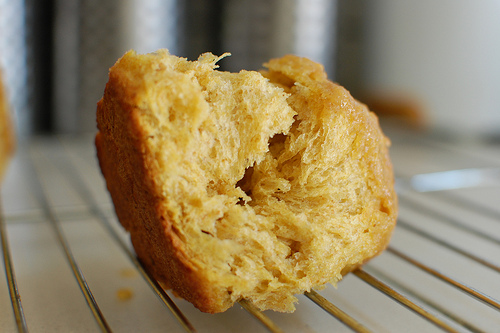 Healthy 6am weekday conversations in our home are rare. As I guess they are in most households with children of any sort: pre-teen and post teens! Usually, moaning and grumbling tend to dampen the chit-chat of the blue tits and red robins; and even the cocks crowing-a dawn. The kids channel crackles with dragging feet and sniffling that has tears lurking close by. 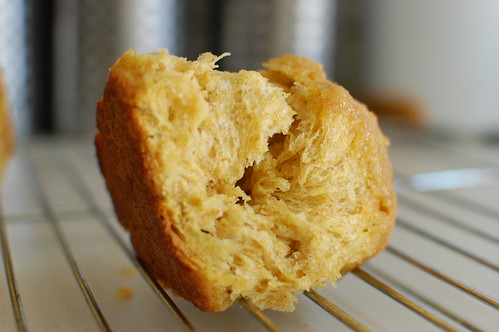 Memory slates are wiped clean. Were they not, human children would recollect the encouragement from ‘bothering’ parents to sleep early ….the night before. ‘Oh Mama, only 5 more minutes of Disney channel. I want to finish my book. I can’t find my teddy bear. Dinosaur. Hair band’. Numerous pleadings soon turn insistent – ‘You have to go to bed now!’ And the ritual begins. I coast up and down the halls, settling one in one bedroom, kissing the other, going back to the first room to turn on air-conditioning, put out lights and mute all discussions that could easily fill an hour. 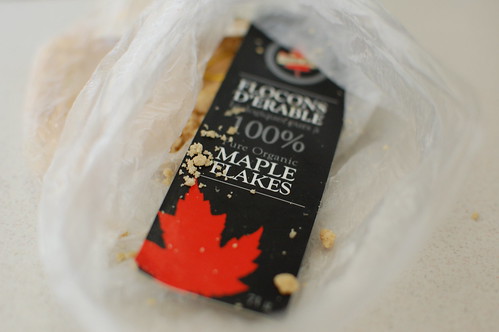 And then it is morning. Sunrise and its magical tropical warmth are accompanied by gentle morning taps and nudges. The wake-up calls are often rewarded with ‘I didn’t sleep one bit last night. I couldn’t even sleep. I was awake the whole night. I’m tired. I don’t want to go to school’. Often the one question that envelopes me in laughter comes from a certain 4 year old who will open an eyelid, one singular eye covering to ask ‘Do I have PE (Physical Education aka opportunity to play, run and jump) today? If it is a Tuesday or Thursday, he gets up the instant I whisper into his ears ‘Yes, you have PE today’. 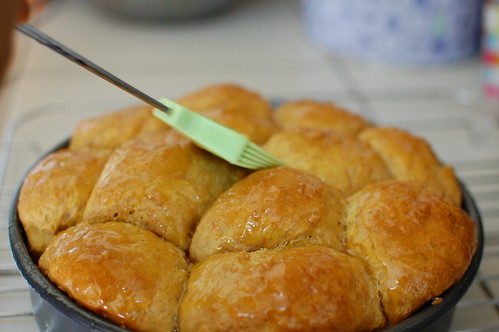 He needs no bidding. He rouses himself with passion, heads to the bathroom and then once his morning routine is executed, marches to me for the rest. On any other day though, the son is usually not pleased; especially on Mondays and Fridays when his sisters are kitted in red and white sports clothes, for their own day of PE. But then again, he is a growing young man whose needs for physical activity have been awoken…and need nourishing. I’ve learnt well and so on most Mondays now, I say to him ‘You have PE tomorrow’ and this rouses him…and makes him smile. We cuddle and laugh and he arises. He understands.

After weeks of getting worked up, I begin to nod in agreement when the morning discussions begin. Time has taught me the foolishness of doing otherwise. And in all honesty, I know the feelings of tiredness for numerous times I’ve woken up broken, as though I never laid my head down to sleep.  An additional antidote is tickling….which I’ve begun to employ…and which is working too.

That morning’s conversation (months ago), held between the fire of dawn and the rising sun is all about Maple syrup. Daughter #2 long ago pledged allegiance to Canada, loving both its symbol of Independence – the maple leaf and the syrup produced from its trees. Her pancake-eating and French-toast quaffing days however were in steep decline. She said, ‘Mama’, pulling her white socks up…’I miss Maple syrup. I can’t eat pancakes without them and I want to’, the other sock going on, and the soft white cottonness folded down, as if underlining the importance of her profound statement. This is from a child who isn’t a weekday ‘morning’ person. 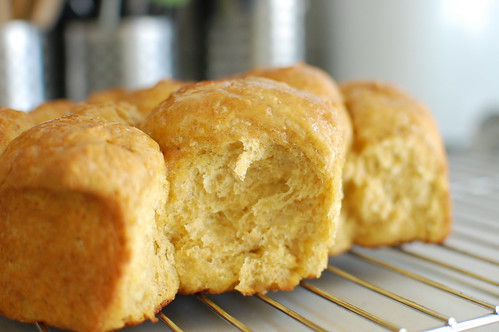 At that point, I announced the arrival of our container and personal belongings; and she asks again if her bottles of Maple syrup are there. I said yes, and she wanted to know how many ‘litre’ bottles there were. When I said five, she flashed the widest rising-dawn smile I’d seen in recent times. And gave me a hug. And proceeded to tell me with as much seriousness as she could muster, which for this particular child is no difficult task; she said as she donned her white cotton shirt, school logo flashing in red, that she wanted to change her name. To ‘Maple Syrup’.

I laughed, a hearty laugh. And then tell her it is not possible. That name is protected, and in many parts of the world is a ‘produit du terrior’. Even if it weren’t, I’d rather she bore the name we so loving gave her, which means ‘Only God knows what he’s doing’.

I like the sound of terrior though, which in typical French fashion sounds immeasurably more sophisticated than it is…to begin with. It roughly translates as ‘Taste of a place’, and if you’ve ever had a Greek Salad at a Grecian restaurant on an island in the Mediterranean and gone on to try the same dish in London, you might understand what I mean. Often the atmosphere, quality and something else is captured in that place, the origin, the fulcrum and centre. A ‘je nais se quoi’ quality.

And so I tell my wonderful daughter that much as I’d like to immortalize her in history, I can’t magically convert her to another type of liquid gold. To a syrup fit for dousing pancakes. What I can do for her though is let her arise on a weekend morning to the sweet smell of a freshly baked loaf, fit only for princes and princesses, with all the richness, warmth and sweetness of her beloved maple syrup. And that’s exactly what I did.

This loaf was perfect in winter even if it speaks of the best of autumn and fall – the sweetness of the maple and the orangeness of pumpkin puree. The softness of heart and the nostalgia that come upon us when all around are scattered leaves and blazing skies.

The crust was golden, soft and fudgy with a maple butter glaze and maple flakes. Heaven. And the interior – soft, supple, rich, tender, chewy, and shred-y.

Scald milk and pour into a large bowl. To it, add the maple syrup, butter, pumpkin puree, stirring till the butter is melted. Then add the egg, rolled oats and salt. Allow to cool to lukewarm.

Combine the flour and yeast and using a dough whisk or a wooden spoon, then gradually add the flour mix to the cooled ‘liquid’. You may not need all 3 cups. The result dough should hold together, with no flour lumps/patches. It should be soft/loose but should not be liquid!

In typical lazy (and successful, might I add), no-knead fashion, cover with a lid/loosely with plastic wrap and refrigerate for a minimum of 2 hours or overnight. The resulting dough does not rise much.

Turn out the chilled dough on a floured work surface and knead or fold and turn the dough slightly. Cut dough into 12 balls. Press each ball into a flat rectangle with your fingers, then roll up and tuck ends under. 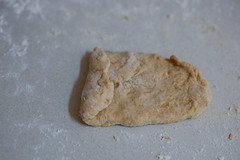 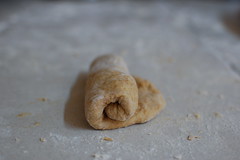 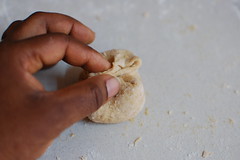 Place seam-side down in a well-buttered 9 inch round pan. 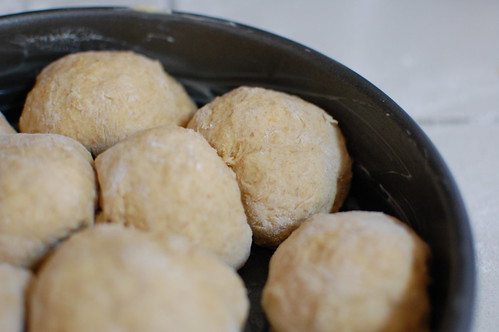 Brush all over with ½ of the melted butter-maple mix and sprinkle with the maple flakes. Let rise until doubled in size in a warm place, about two hours. I find my microwave is the best spot for ‘rising dough’ not to mention safe and away from hands and other random objects falling out of full cupboards! 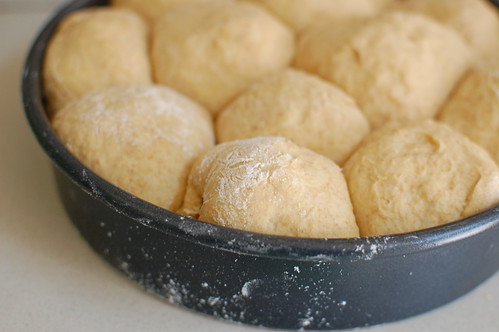 Preheat oven to 170°C (350° F). Bake for 35-40 minutes or until rolls are nicely browned and sound hollow when you tap their tops. The internal temperature should be 190 degrees (I used my meat thermometer to check this!). 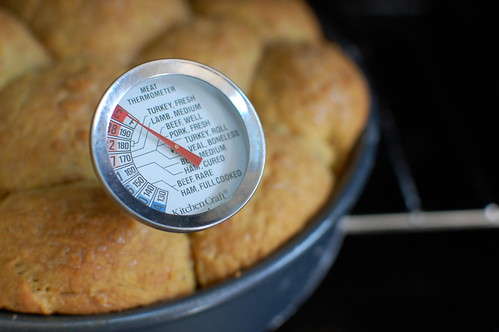 Remove from the pans and brush generously with melted butter – maple mix. Let cool on a rack for 5-10 minutes. 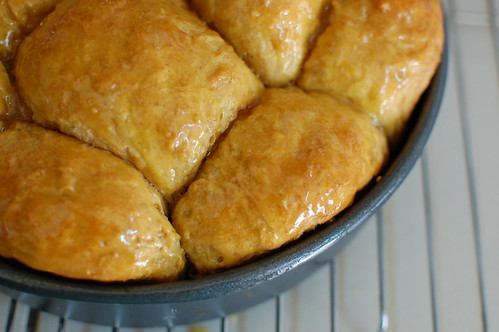 Serve warm…with salted butter, jam and anything else that tips your scales!

All said and done, I see a trip to Canada is in the offing….. I’ll have to get your recommendations (at some point in the future) for a maple-tapping camp so I can take the kids to get the real experience.