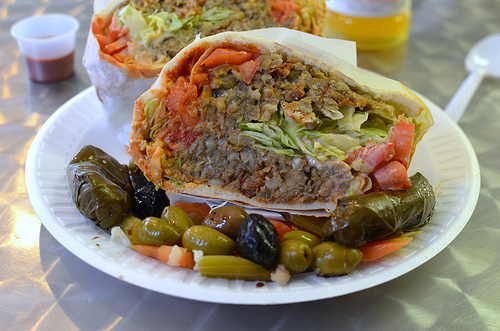 I am on the train to Grand Central, refreshed by winter’s air and shine. Heading to Kalustyan’s for Lunch.

Its amazing how I’m loving the cold. When we moved away from The Netherlands, my husband and I agreed there would be no more winter holidays, no snow, no ice….no freezing cold. At least for the next 4 years, till we (possibly) move again.But now in the heart of winter’s cool, and after 12 months in the sun, in the tropical heat, I’m not sure if warm holidays are entirely it.I know I say this because blizzards aren’t here, because the winds are mild and the air is fresh.

Because I can stand outside, fashionably dressed and fingers unsheathed in leather gloves, with feet clad in knee-high boots I thought I would never wear again!

I am seeking spice at Kalustyan’s, on the hunt for grains of paradise. A journey that habours a tale that will soon be told.

I am seeking thrift, in a store on East 23rd street. Bargains of the best sort at Housing Works. Thank you Anna Hezel of Cup & Hammer, and Food52 for making me cotton on to Housing Works.

I am seeking friendship and food at Norma’s table where a feast of lamb awaits.

What great things to be thankful for.

The stop at Kalustyan’s is mainly for lunch and spice of course. For the reputation of their stuffed Mujadarra pita bread is well-known to me.

But first I coast the aisles, seeing everything from Forbidden rice to Curry Powder from every country! Arranged by the row. 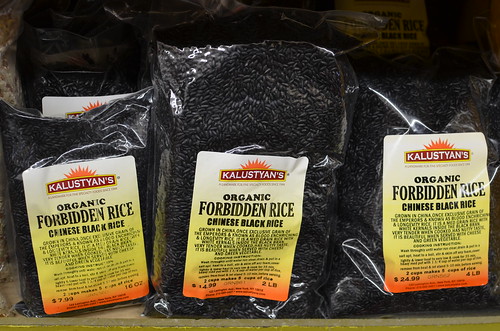 I’m seeking sumac and an old man with suspenders tells me: ‘Its on the left as you walk into the spice hall.’ I am stunned – he knows where everything is for I see him direct other people aright. 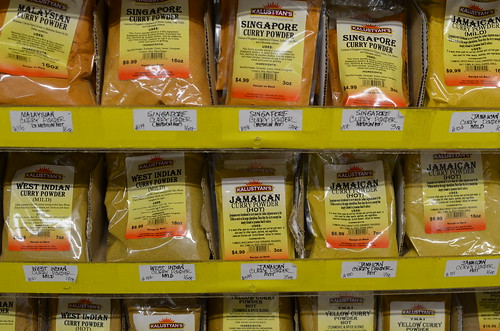 I spot Vaduovan, the latest ‘rave’ in spices. Part French (imagine the song the word must play on your lips), part South Indian, a spice that goes well with classic French dishes. Wow. I opted not to buy, I’m thinking I can make my own. Sometime in 2013. It shall go on my New Year’s resolutions, along with sleep and sing.

According to Gourmet, vadouvan originated around the French settlement of Pondicherry in southern India. It appears to me to be a version of the Tamil Nadu seasoning vadagam or vadakam, which is made by combining onions, dal, cumin, curry leaves, and other spices, shaping the mixture into balls, and drying them in the sun to be stored for later use. In the Gourmet version, shallots are added to the mixture, which is roasted in the oven until practically dry, giving it a deep, smoky taste.

Do you know that I have a good friend from Pondicherry who is a professor of Cultural Anthropology, a wonderful food blogger and exceptional poet, illustrator…..I could go on. Come meet Deepa, writer at Paticheri and  ,y Nigerian sister, who’s Indian! 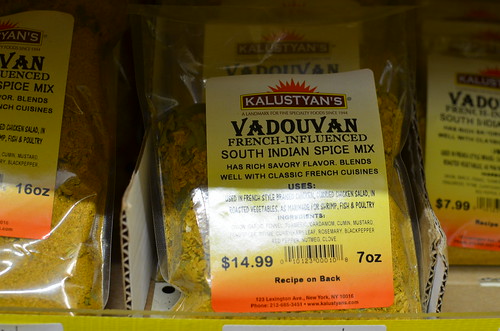 I smile when I see their Tsire spice mix, the dry rub for Suya. Its good to know that true diversity is resident on the shelves on Kalustyan’s. 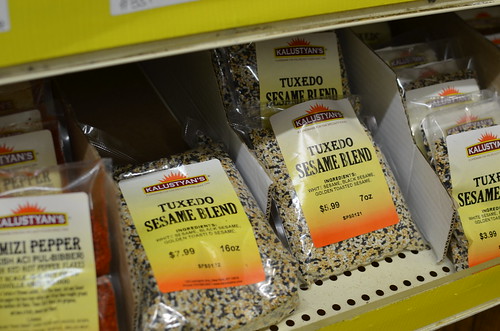 There is an aisle full of ‘Modernist Cuisine’ ingredients. Things like Butter Powder and Avocado Powder! Who knew those creamy green pears could be transformed into powder? 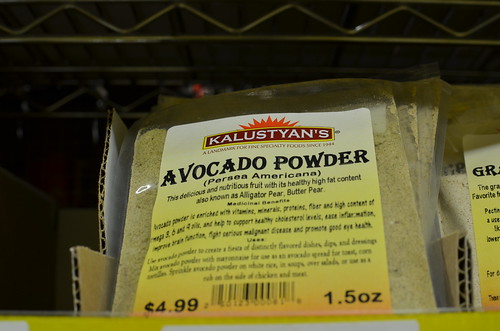 Or that Butter powder could be made from actual butter. Will you try this at home? 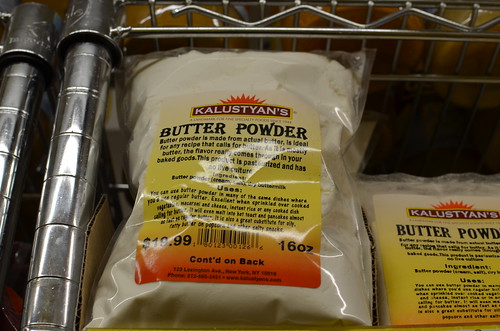 According to Serious Eats, on Kalustyan’s stock of Modernist Cuisine: Part of the new-ish modernist pantry at the store, dehydrated vegetable, cheese, and vinegar powders are increasingly common. When in doubt: toss them on french fries or roasted potatoes 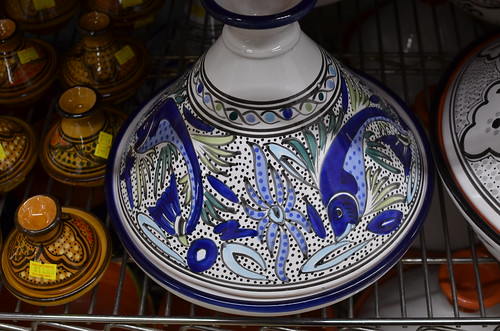 But food is calling out to me…. 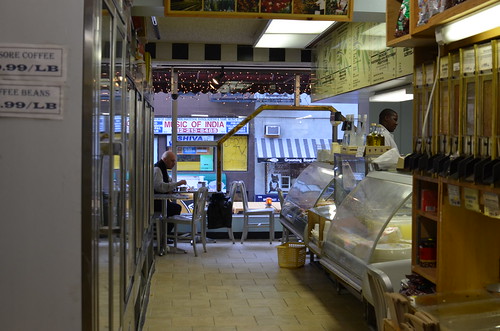 And the Menu board is screaming my name. 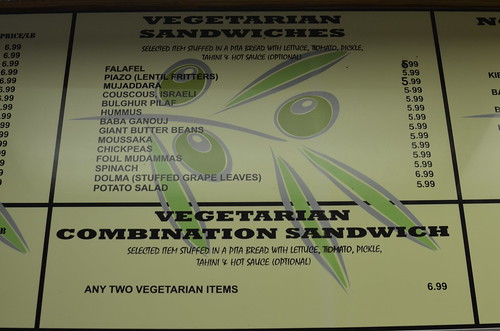 I order the Mujadara sandwich, that’s huge and is delivered sliced in half with pickled sides – olives, and vegetables in the manner of the Italian giardiniera. 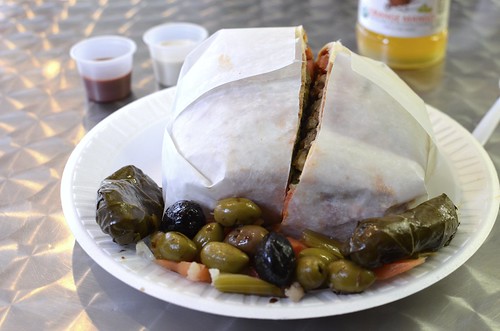 giardiniera, a satisfying mix of cauliflower, carrots and peppers that are brined, then marinated in a zesty dressing. Giardiniera (pronounced jar-deen-YAIR-uh and Italian for “from the garden”) is piled on pizza, hot dogs and even stirred into tuna salad.

Bionic Bites says it so well, that I’ll on interject….to shed light, or mention my peculiar experience:

On the second floor, in the back, behind more rows of spices, there’s a counter manned by a perpetually smiling older gentleman and a younger man. If you’re not sure of what you want, ask him for a few samples (I didn’t, but while I sat an ate, he brought me a cup of the tastiest lentil and butter bean soup I’ve ever had – smooth, creamy, chunky and well-seasoned) He’ll gladly oblige. Ask him for a sandwich recommendation, and he’ll tell you to get the Mujadara Sandwich( $5.99), a pita stuffed with a mash of lentils and roasted onions, lettuce, tomatoes, and tahini. Pickled vegetables and assorted olives come on the side as long as you get the sandwich to stay. (There are a few small tables by the counter.) The lentil mash is really great because of the roasted onions. The onion flavor is intense. Not sharp, but rich and earthy throughout. It’s nice as-is, but to make it better, ask for hot sauce. Their version is reminiscent of the fiery hot sauce at Mamoun’s, very peppery and not too vinegary. The spice really brightens up the sandwich nicely. 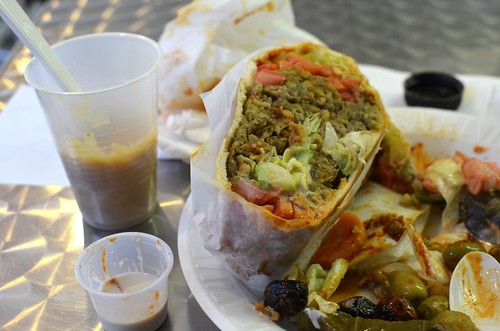 The sandwich was HUGE. From all the research I did, I knew I’d only be able to eat half. And eating that half was messy for me….but then I’m not the tidiest eater I know. The other half went home with me.
For those not familiar with Mujadarra (Mujaddara), it is a Middle Eastern dish of boiled, white rice (Groats)and green (Puy-style) lentils, combined together with sweet, caramelised onions. I have made it, after discovering a contest-winning recipe on Food52. What would I do without Food52? I have absolutely no idea.

According to Wikipedia:  Mujaddara is the Arabic word for smallpox; the lentils among the rice resemble pockmarks.The first recorded recipe for mujaddara appears in Kitab al-Tabikh, a cookbook compiled in 1226 by al-Baghdadi in Iraq.Containing rice, lentils, and meat, it was served this way during celebrations. Without meat, it was a medieval Arab dish commonly consumed by the poor, reputed to be a derivative of the “mess of pottage” Jacob used to buy Esau’s birthright.A saying in the Eastern Arab world perhaps inspired by the Biblical story is, “A hungry man would be willing to sell his soul for a dish of mujaddara.”

The pita bread is soft and chewy. The cool iceberg lettuce and chopped tomatoes contrast nicely with the ‘meaty’ mujadarra. I sit on a small silver table, overlooking Lexington avenue. And drink some ‘orange and mango’ honestade. For a few minutes I fussed over what to drink, wanting the perfect flavours to match my lunch. It was unnecessary, over-the-top if I must say to worry about that. for it didn’t matter once I sat down to eat.
Two sauces accompany my meal, a sesame (tahini)-based sauce and a nice red hot sauce, which definitely has paprika in it.

I spoon both over one half and devour it. Leaving a trail and picking up after myself. It was a nice and satisfying lunch. A good complement to my shopping basket :-). 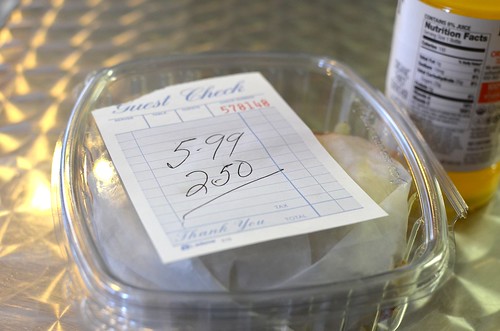 I arrived Kalustyan’s with a small bag, which hides another, a shopping bag that now bulges with all manners of delights. Expect to see constant reference to Kalustyan’s in 2013.
I head to a Thrift store at Gramecy, mere minutes from where I am . And yes, I bring up the goods. That’s coming up. Stay tuned friends. Talk soon.
Kalustyan’s
123 Lexington Avenue, New York, NY 10016
Phone:(212) 685-3451

Note, there is a Lexington Avenue exit at Grand Central