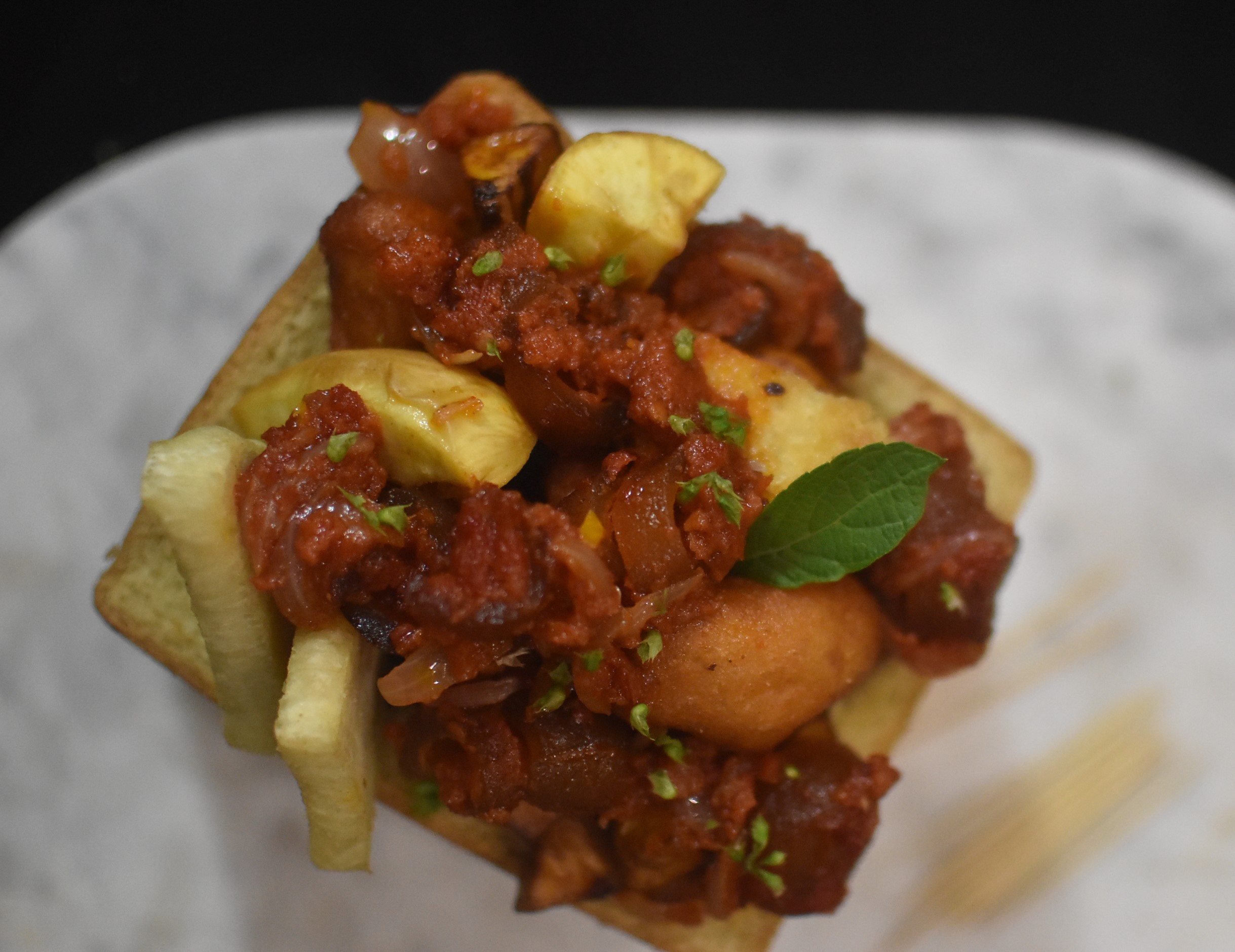 The perfect Saturday morning breakfast – bread and akara, only switched up in a take on a popular Japanese dish. Shibuya Honey Toast

If you know me, you might know that I love Japan food and culture from tea ceremonies to soba noodles, kintsugi, wabi sabi.

Shibuya (渋谷区 Shibuya-ku) is a special ward in Tokyo, Japan. A major commercial and business center, it houses the two busiest railway stations in the world, Shinjuku Station (southern half) and Shibuya Station; Source – Wikipedia

Often referred to as Tokyo’s Times Square, Shibuya is a hub for great food and culture and is apparently the birth place for this delicious phenomenon. I decided to build on the theme and our Nigerian love for bread and akara.  Perfect for the Nigerian National Saturday breakfast of ………….bread and akara.

Shibuya Brick Toast is basically a butter (and honey) basted bread box/ bowl hollowed out. The cut out bread is cut into cubes and then all of it is baked. The bowl is then filled with a variety of items – mostly sweet and the cut out cubes.

Here, I combine Akara with host of other items, common on the streets: piping hot akara comes to you wrapped in paper and accompanied by small loaves of white (Agege) bread.  Sometimes, fried yam, sweet potatoes and plantains with pomo and ata dindin are served on the side – the ultimate street food quad offering.’ 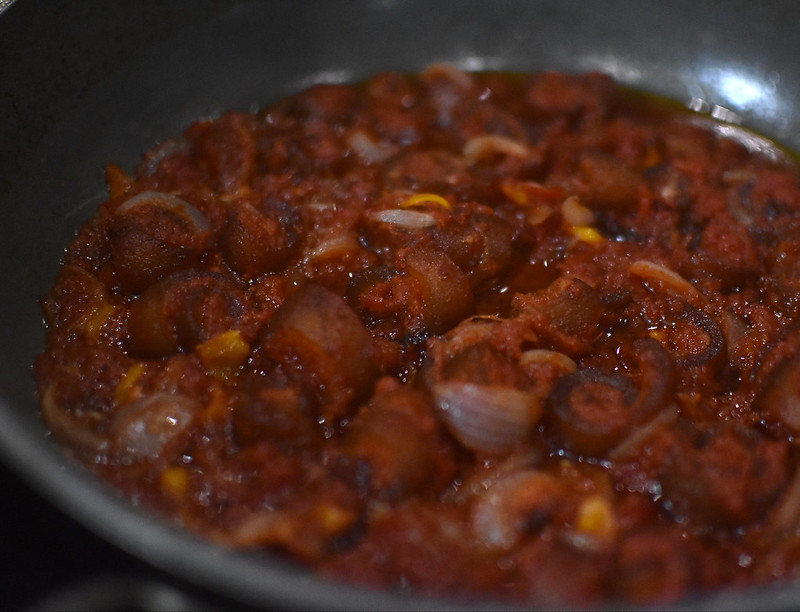 First of, prep your bread and sides. This will include some melted butter. If you like, add some honey to it while warm so it dissolves. Stir well to incorporate.

And so we begin – get a loaf of Agege bread or unsliced bread. 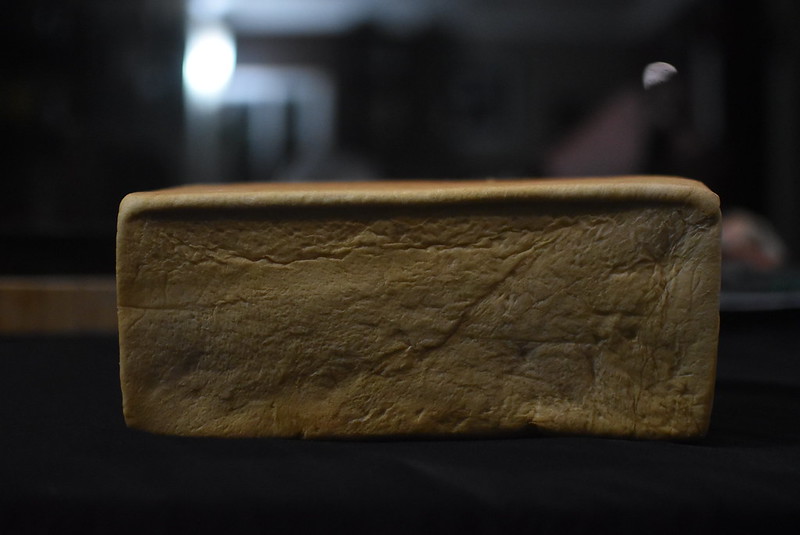 Cut it how you like with a serrated knife – I went for 3/5ths. 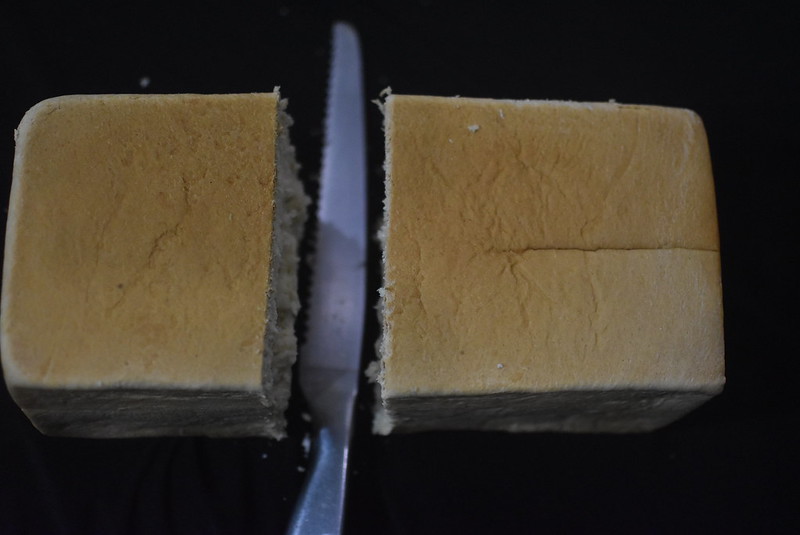 Turn it up, cut side facing up and mark out a box within leaving a rim of a centimetre or two. 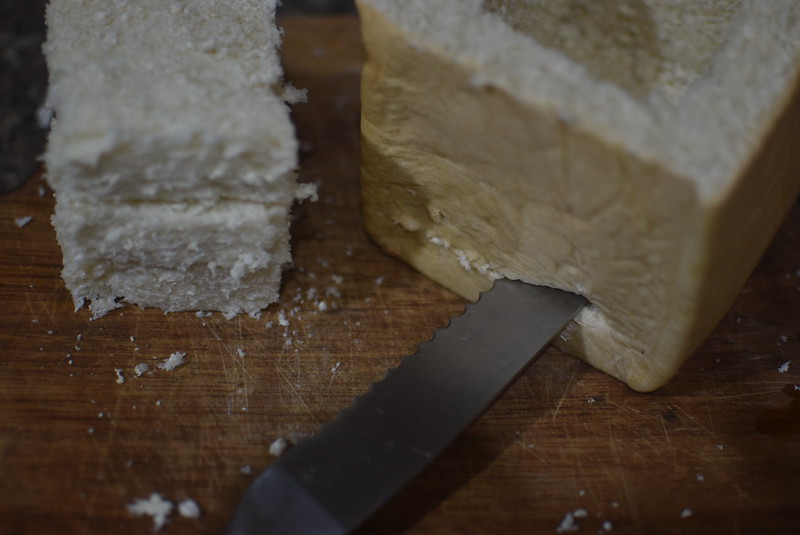 To cut out the bottom so the ‘white’ bread cut out detaches completely, run your knife across, as in the photo below being careful to start in and up from about two centimetres. 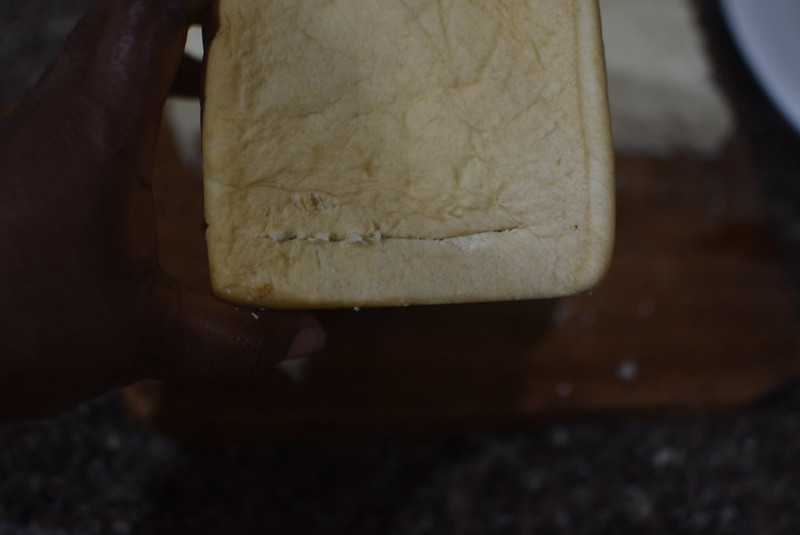 Cut up the ‘removed’ inner into cubes. 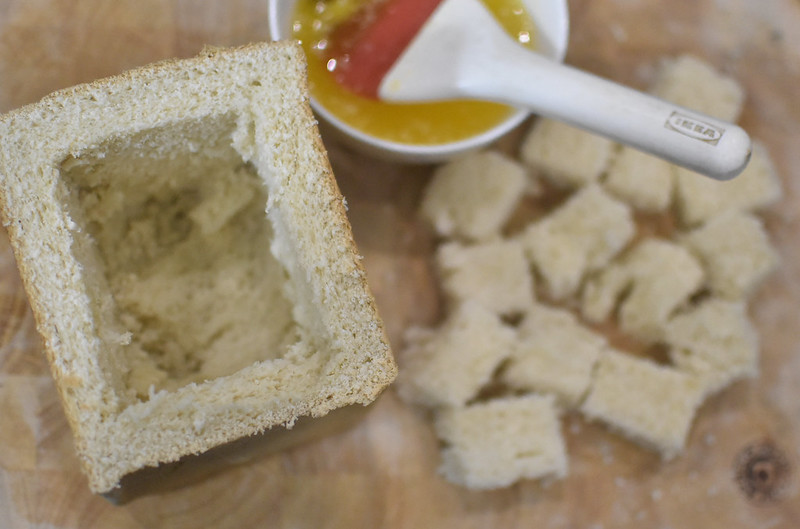 Brush the insides with the melted butter and set on a baking tray. 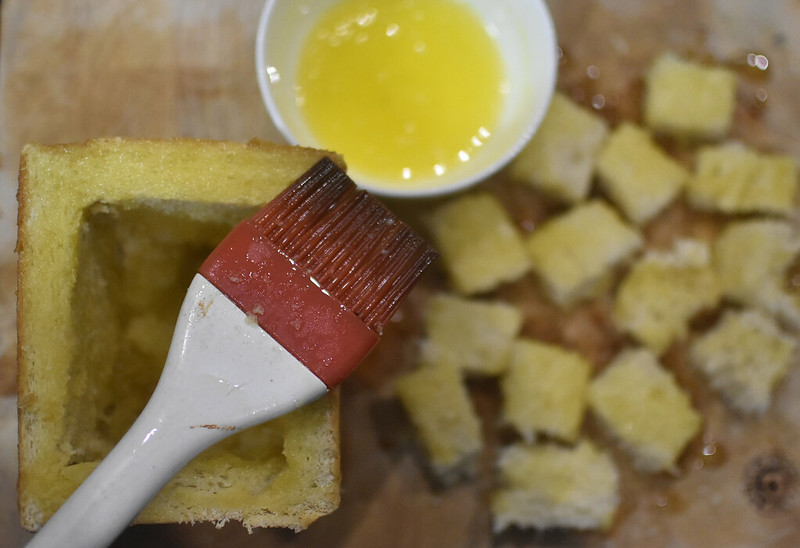 Put it in the centre of the oven, at 170 – 180 degrees centigrade and let bake about 15 minutes or till the cubes are crisp.

Turn the cubes in the course of baking so they toast as evenly or as much as possible.

You can remove it all at the same time or take out the cubes and leave the box to toast even more, say another 10, 15 minutes. I didn’t want my box super crunchy so I went for the former. 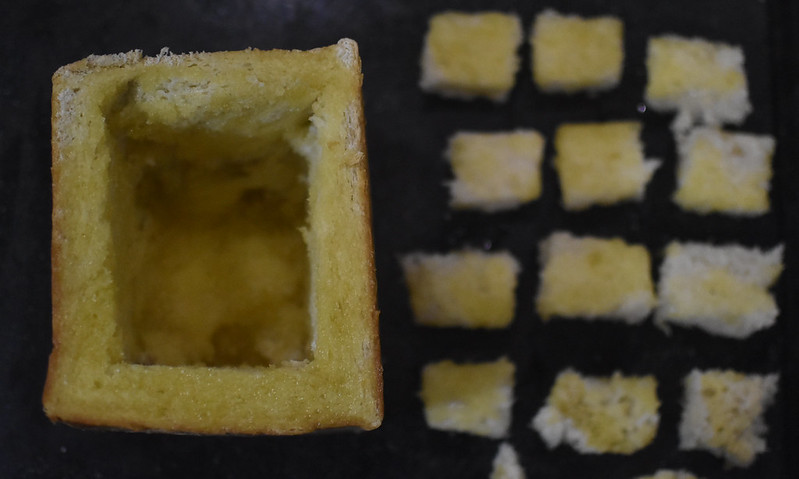 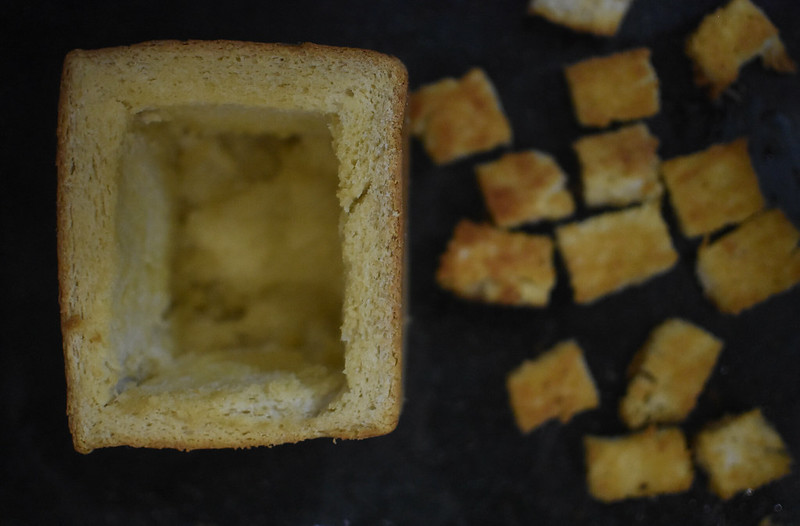 Here’s our box. Glorious, no? 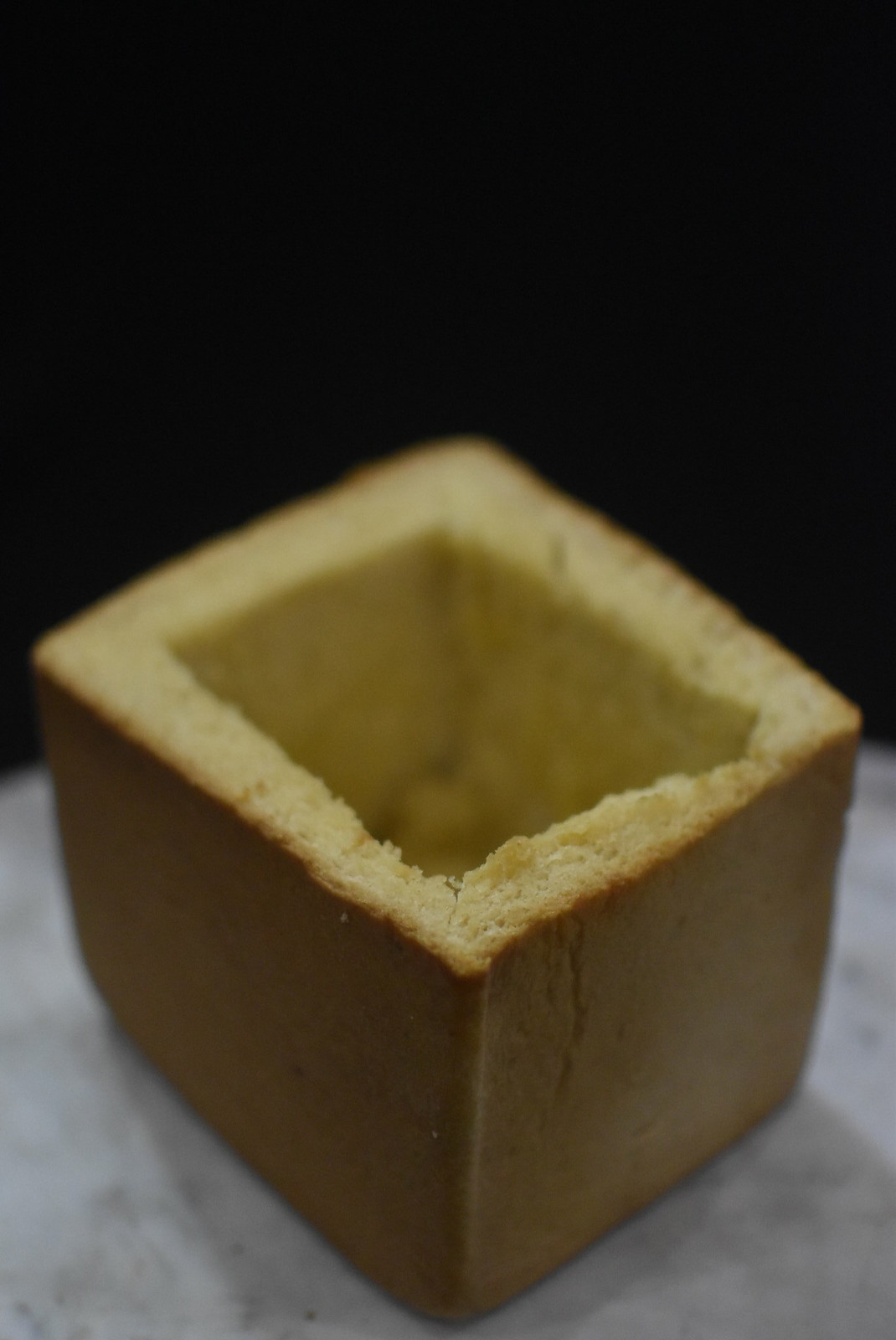 When I began composing the dish, my mouth watered for many reasons – some familiar, others new, like the textural combination of akara and pomo, and the bright, peppery sauce.

The new things? The textural contrast between the toasted bread cubes – normally, I eat akara with untoasted bread – and the akara. I also like small fritters of akara because the ratio of crusty outer to creamy inner is more aligned with my love for crunch.

I began with Akara, and then alternated with the bread cubes. 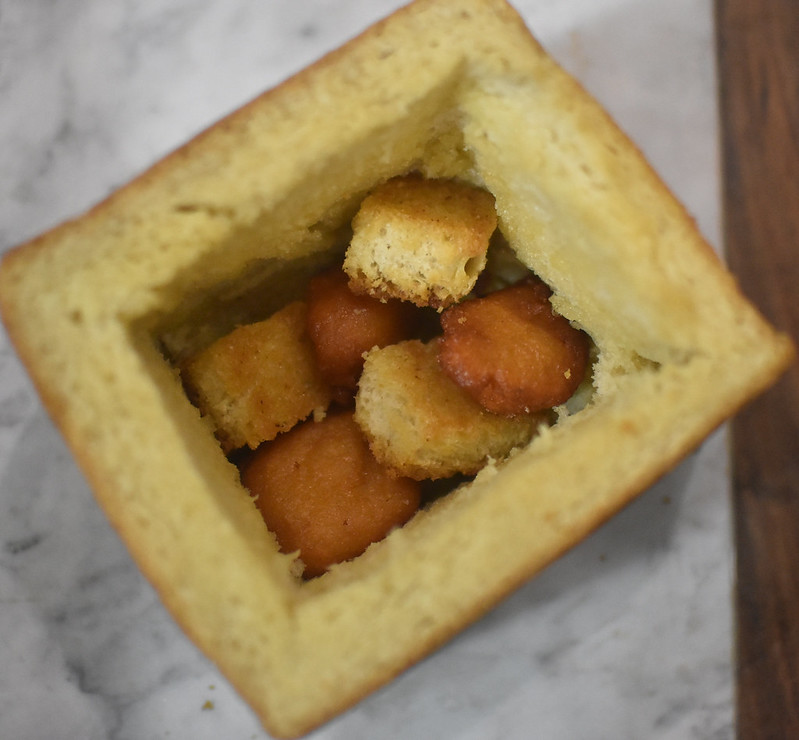 Till I got to the top. 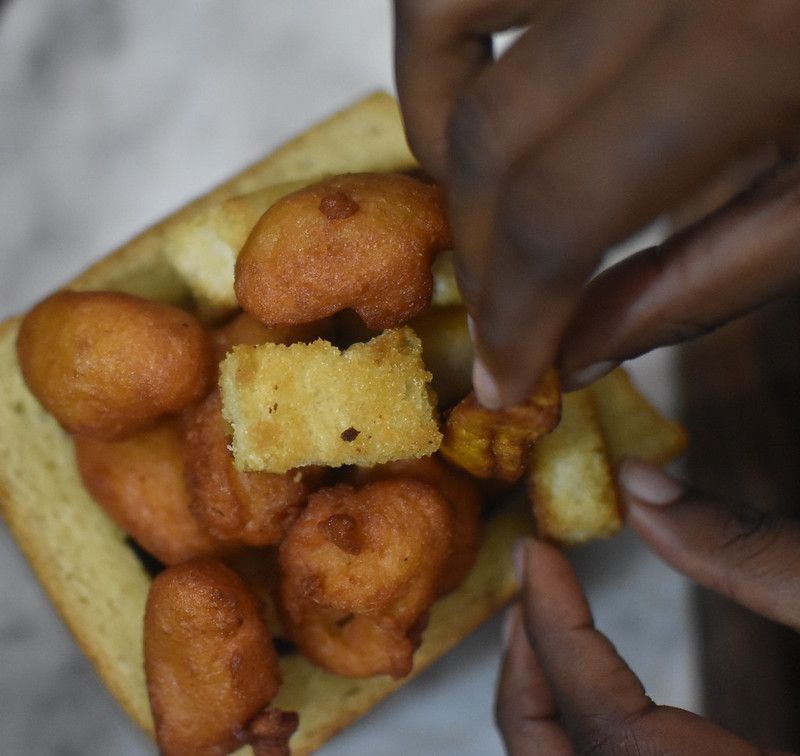 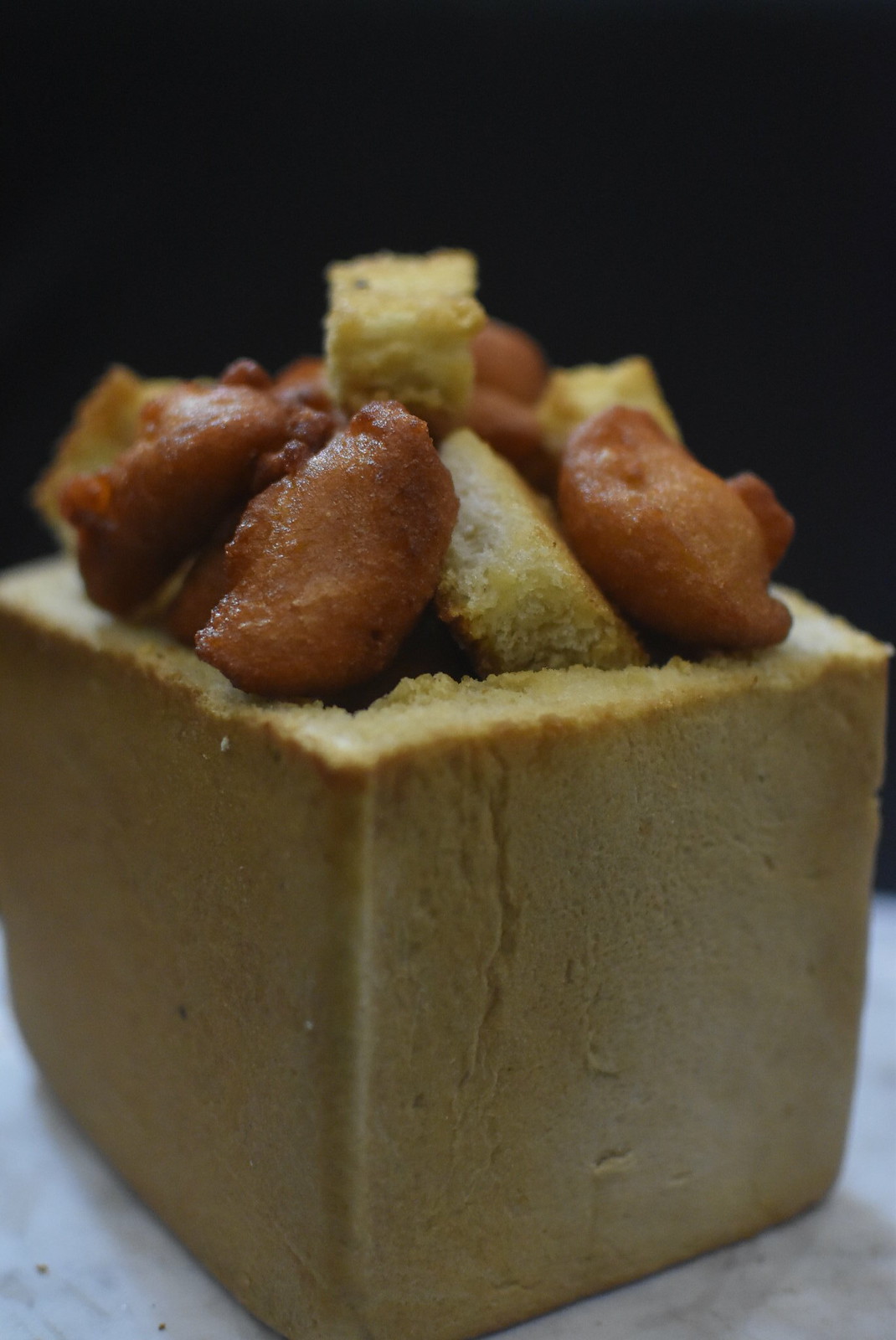 And then the ‘garnishing’ began with the other members of the squad – dodo, sweet potatoes, fried yam 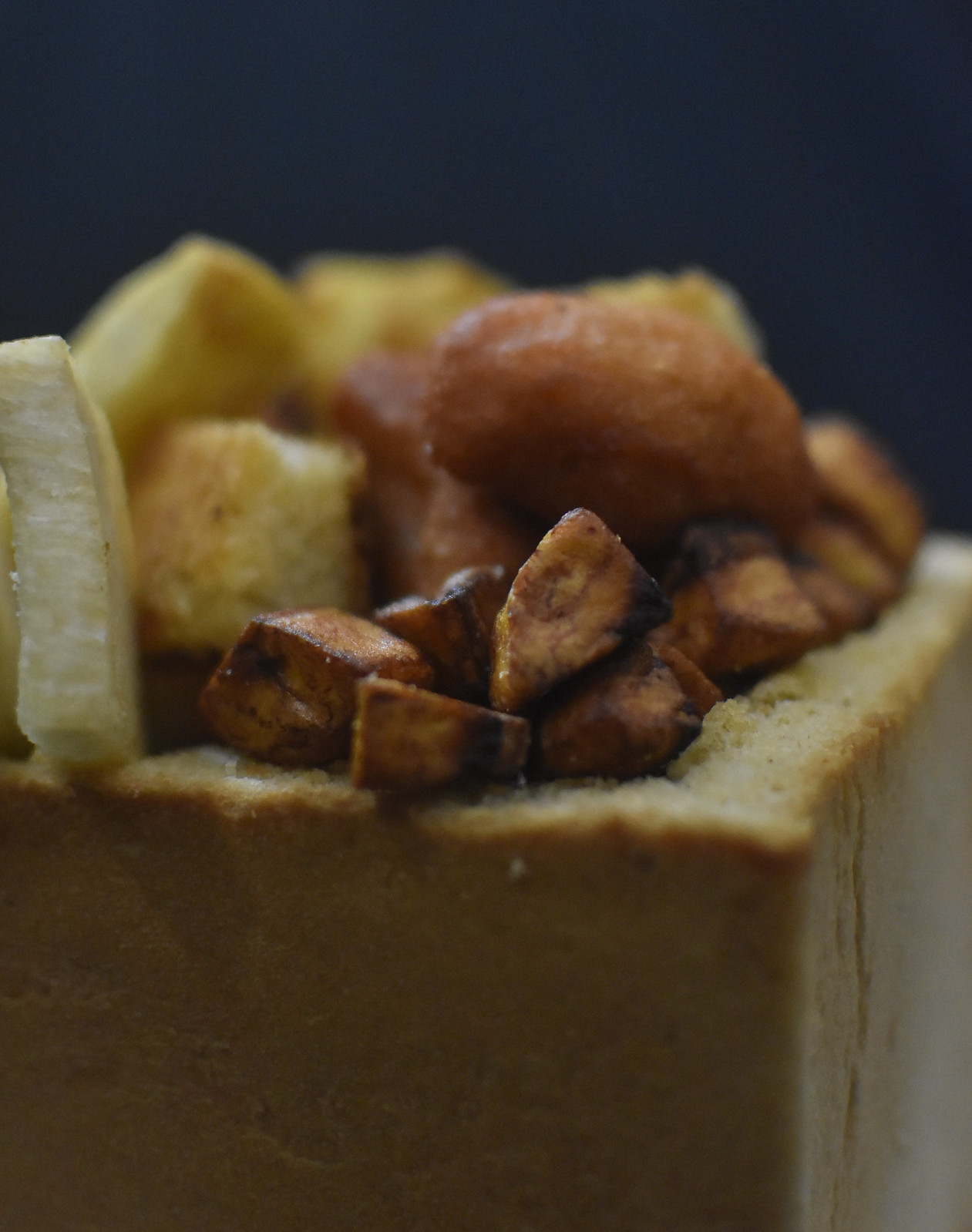 And then, pomo and ata dindin. I finished off the herbiness of scent leaf – both leaves and buds and voila –  all set. 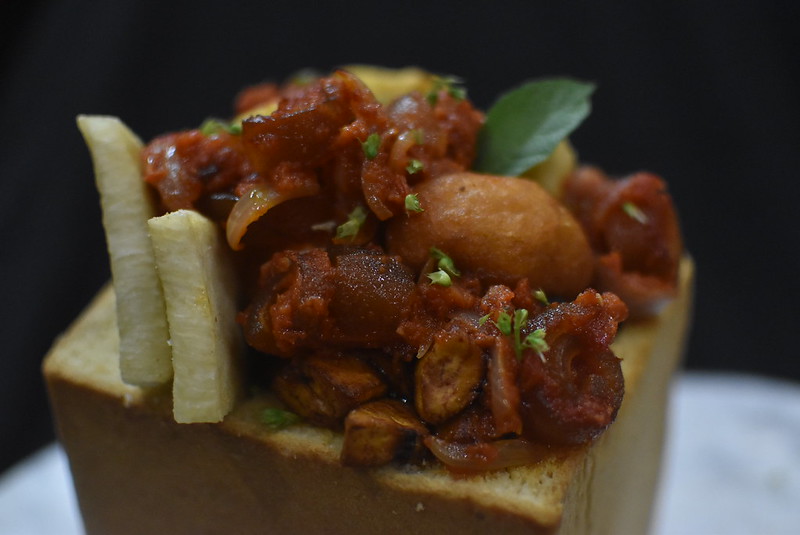 Ladies and Gentlemen, I offer to you, this amazing, family-style serving of Nigerian Akara Brick Toast. 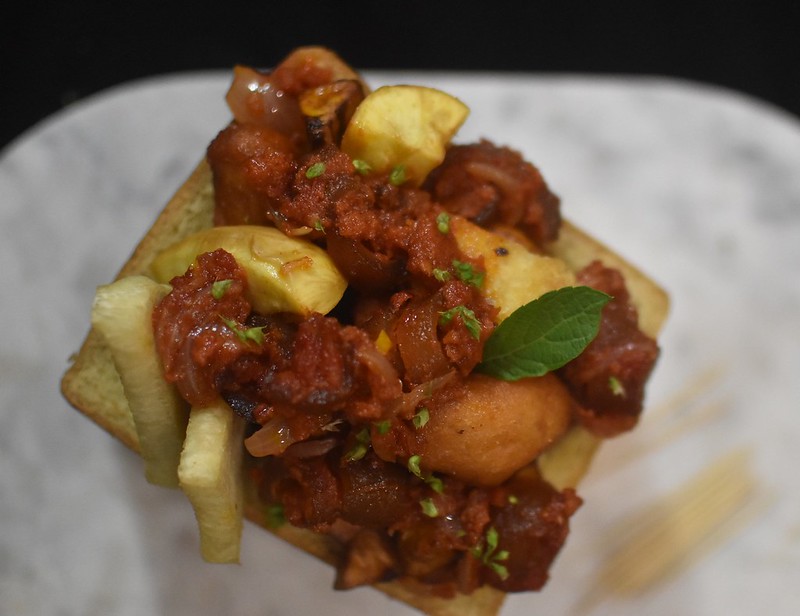 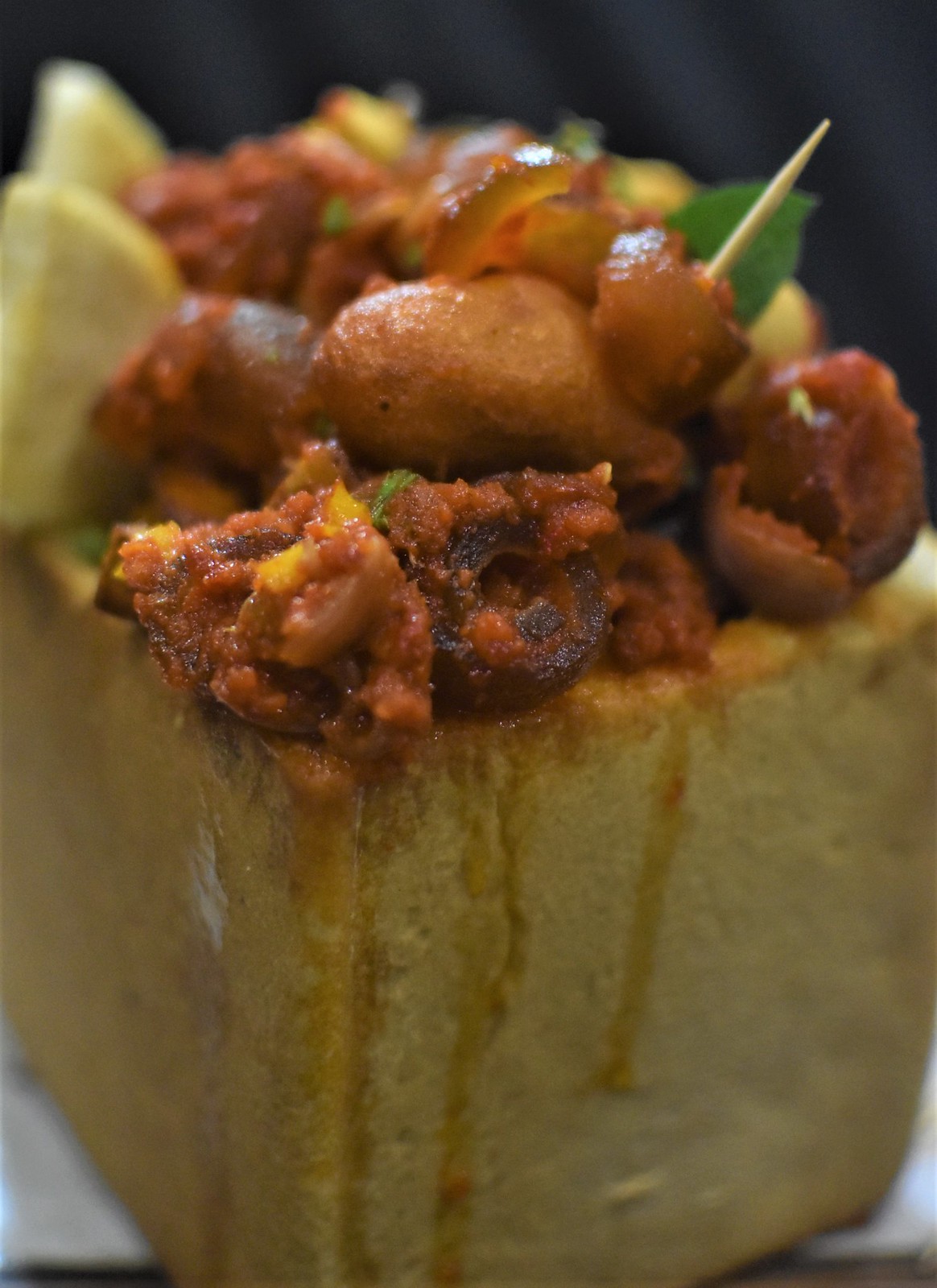 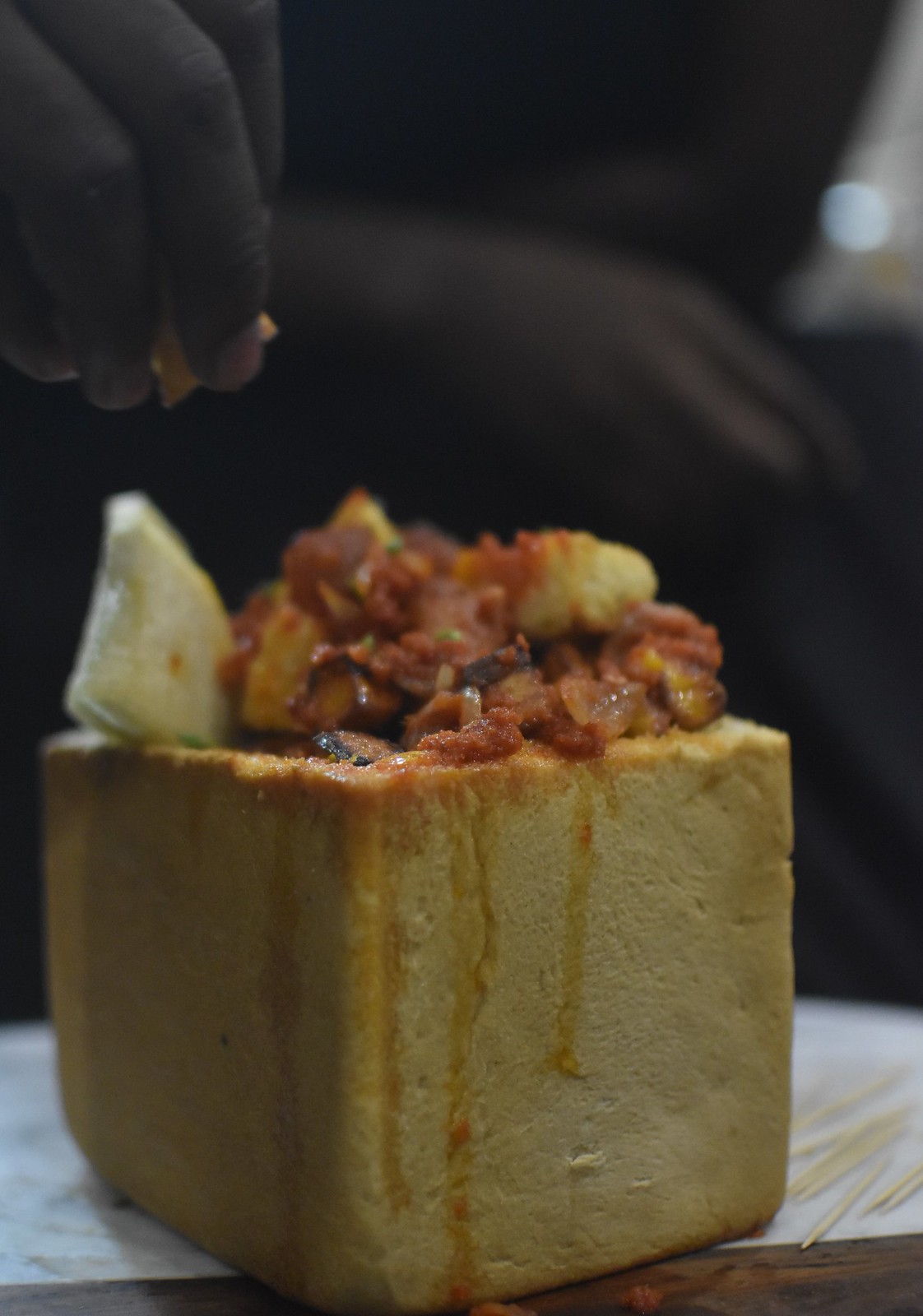 It is both Brick Toast and Food Volcano, did I mention Food Jenga? Kind of 🙂

We ate the peak of the volcano and then I sliced it in half to get to the rest. 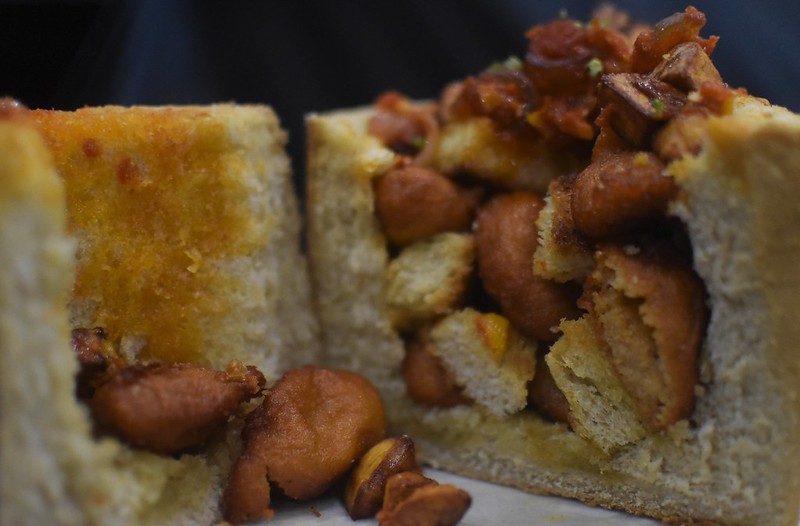 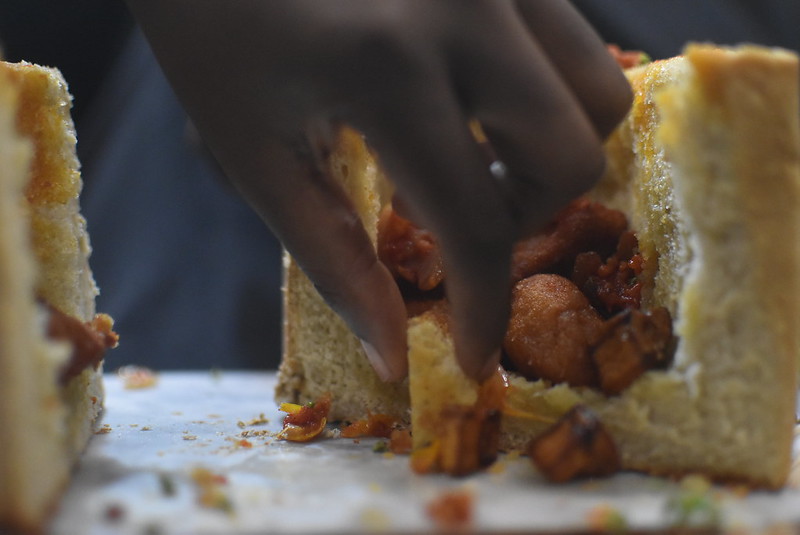 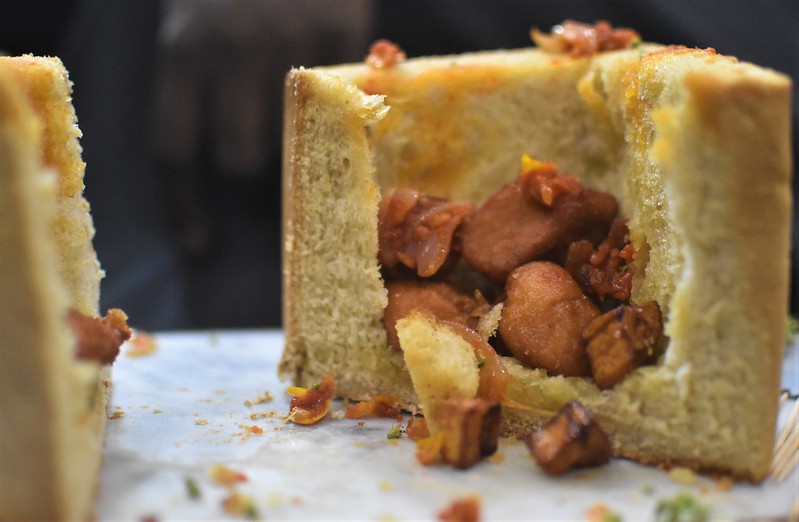 Great for a crowd and a treat. One of my favourite concepts to explore. What would go in your box?