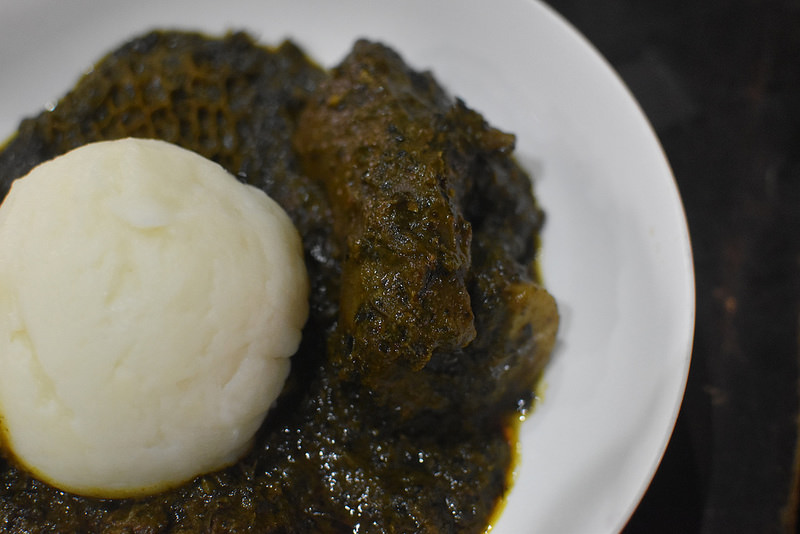 Anyway, don’t you dare let the name put you off this absolutely, good-for-you deliciousness that is Edo Black soup with all the nutritional goodness of bitter leaf, scent leaf (my absolute fave) and palm nut cream! The herby flavours, slightly bitter with a sweet aftertaste work so beautifully – I can now see why bitter leaf soup is a thing too.

I’ve made a version before, but it featured palm oil not palm nut cream. The difference between them? Same as coconut oil versus coconut cream/ milk – different extraction processes, results and flavours.

There are many ‘black’ soups across the country, from the Ondo version, Obe Marugbo to Eru ru shin, scent leaf soup from Agbor in the Delta.

In Benin, Black soup, Omoebe is lauded for its medicinal qualities. Bitter herbs – in this case bitter leaf, are prized for stimulating digestive juices and supporting digestion,” and scent leaf pretty much does the same.

Like I said, I’ve made something similar before – with palm oil and chopped/ hand washed leaves. This version features blended greens and I think that really lends a lot to the flavour. Plus the palm nut cream, heaven.

To amp the flavours, I began with roughly a litre of seasoned meat stock and a blend of ose Nsukka and onions and let it cook on medium heat. 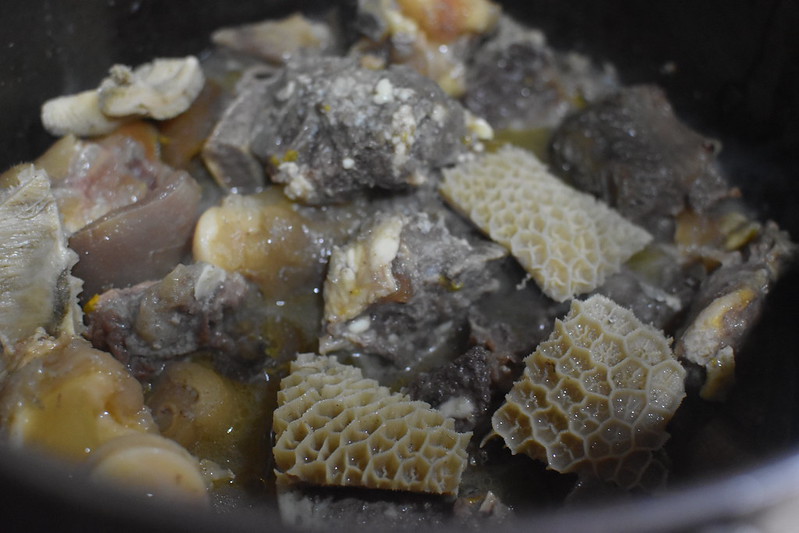 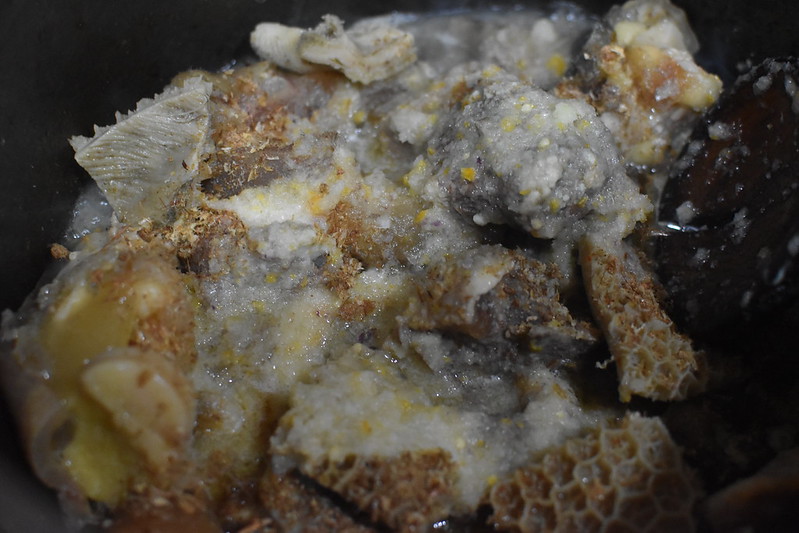 The bitter leaf was fresh, then hand washed after which I blended  it. The scent leaf, I just blended with a bit of water. If I had the energy, I would have ground the leaves on a grinding stone 🙂 but…the blender worked just fine. 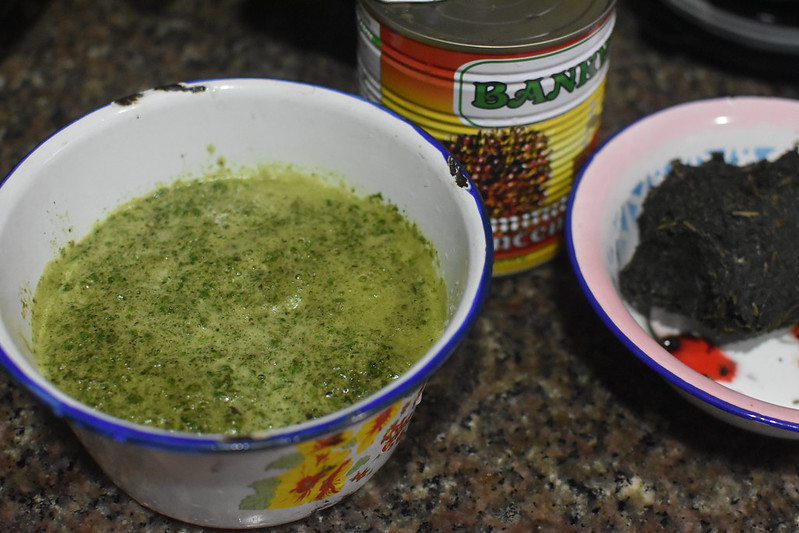 Next in? The palm nut cream. I left it on a simmer till it emulsified with the stock and became a uniform orange. 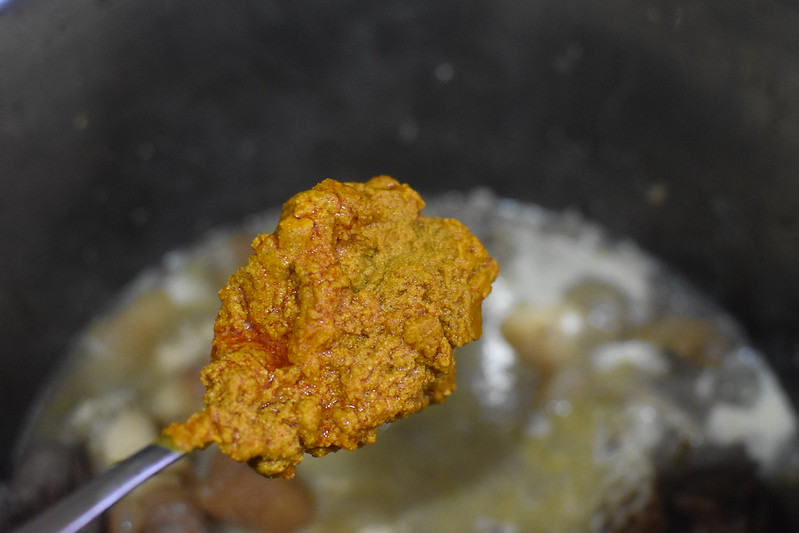 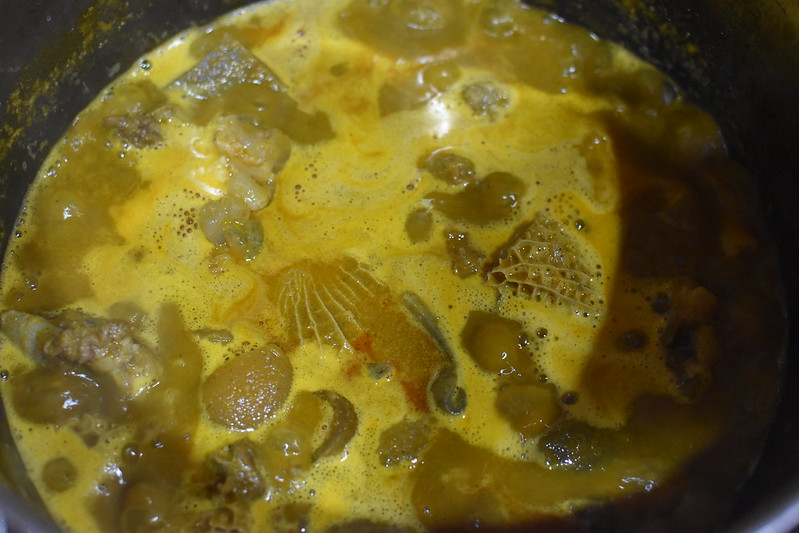 Then the bitter leaf followed. I added a couple of heaped tablespoons because I didn’t want it to be all bitter. 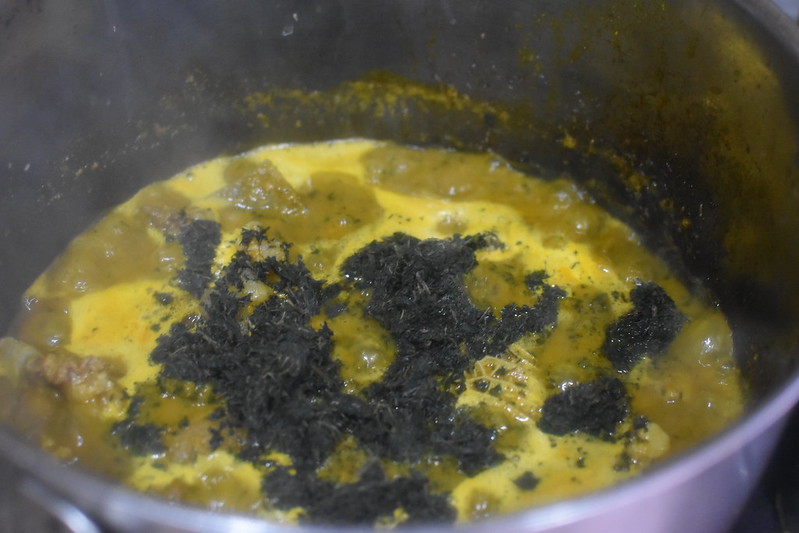 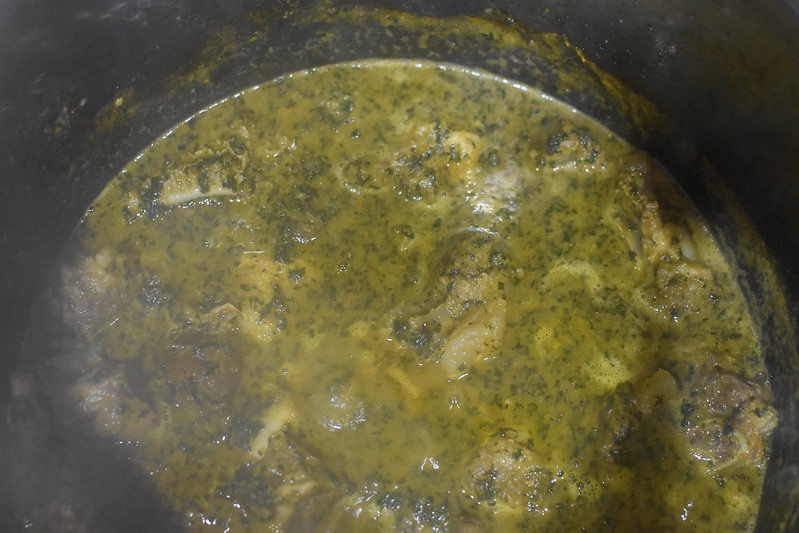 Again, I left it to cook on low before adding the scent leaf. 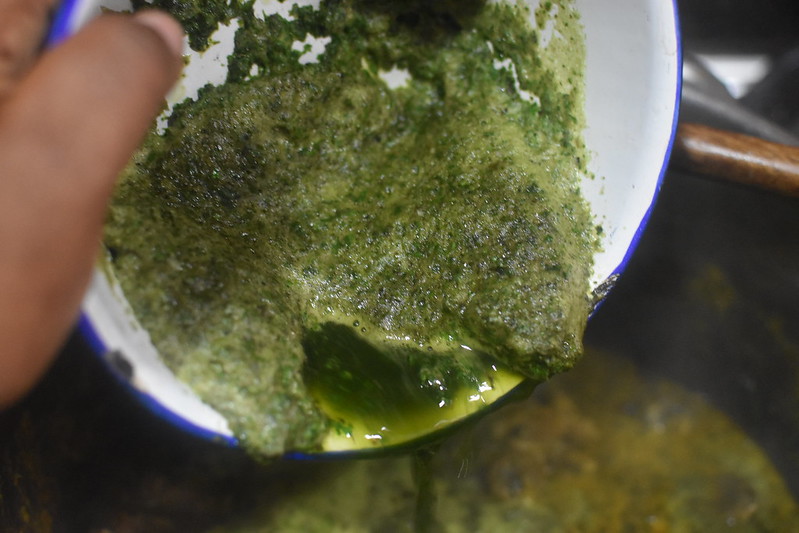 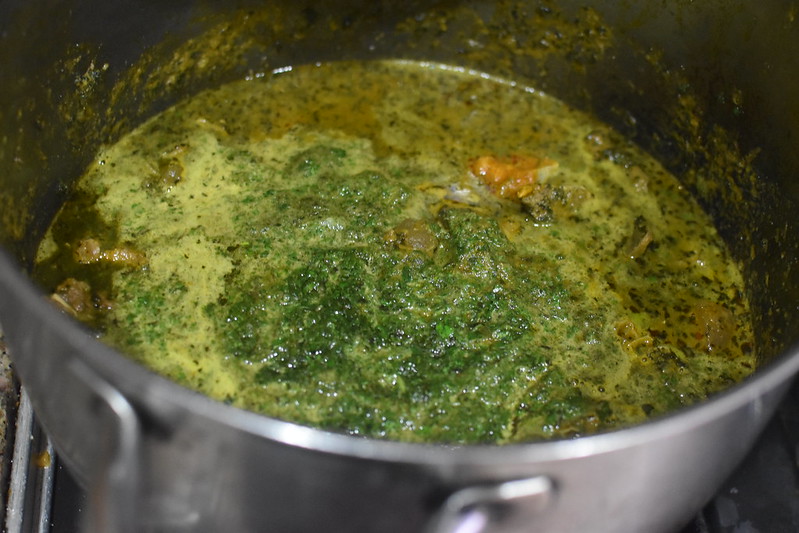 I let it cook again, till it thickened and I felt the flavours had blended. The whole time, I checked and adjust seasoning – salt, crayfish… 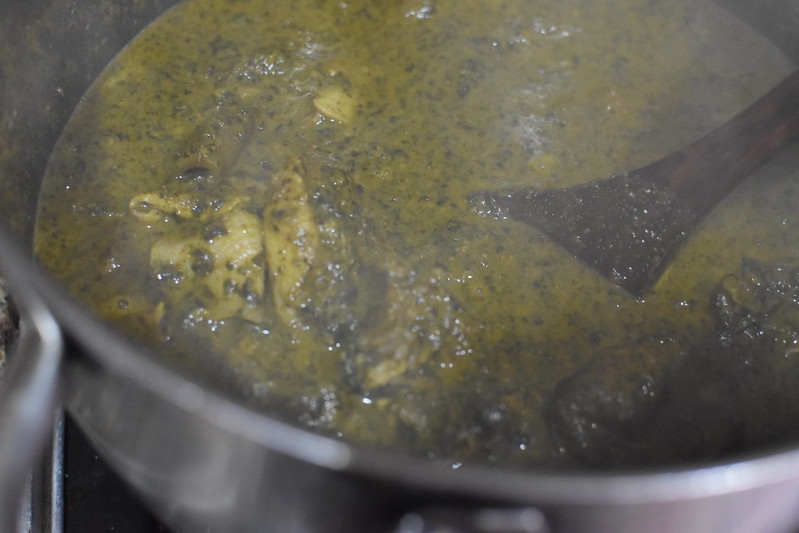 The end result was a green soup with a brown base and oh so delicious. 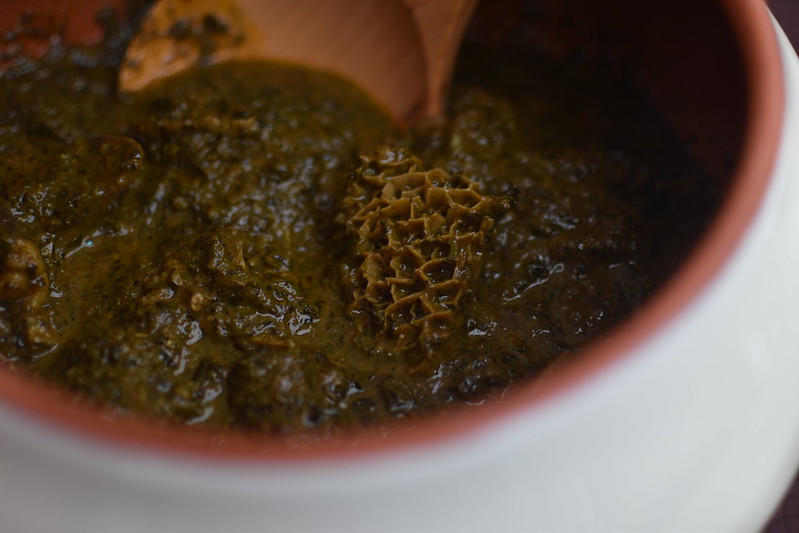 With Poundo yam, a hit. I took some to my son’s school for Independence day celebrations and it was gone in no time. We had people coming over saying ‘They asked me to go try the black soup’ :). And then we got home and the son wanted more. That weekend, we finished a pot and I had to make another! 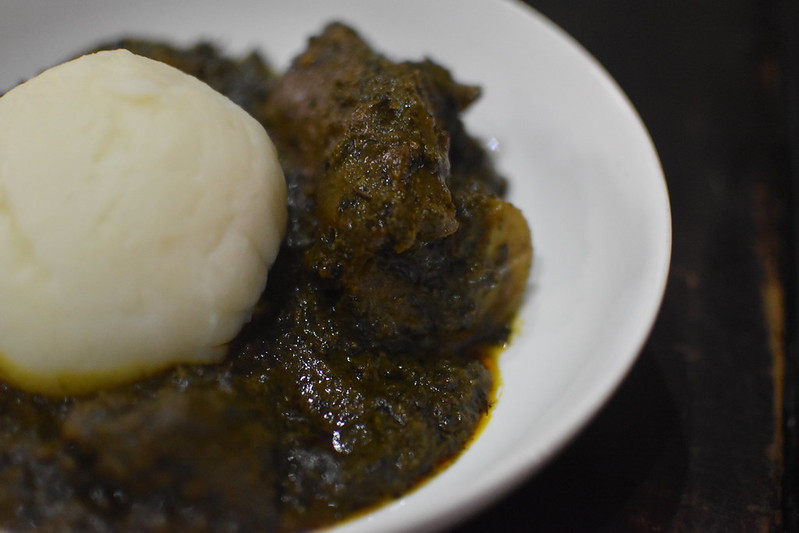 I had it for lunch two days in a row and the one thing that occurred to me is how great periwinkles would be in it, the dried ones…so there will be another go, for sure!

It would also be dope with rice, boiled yam/ plantains/ sweet potatoes and fried too!