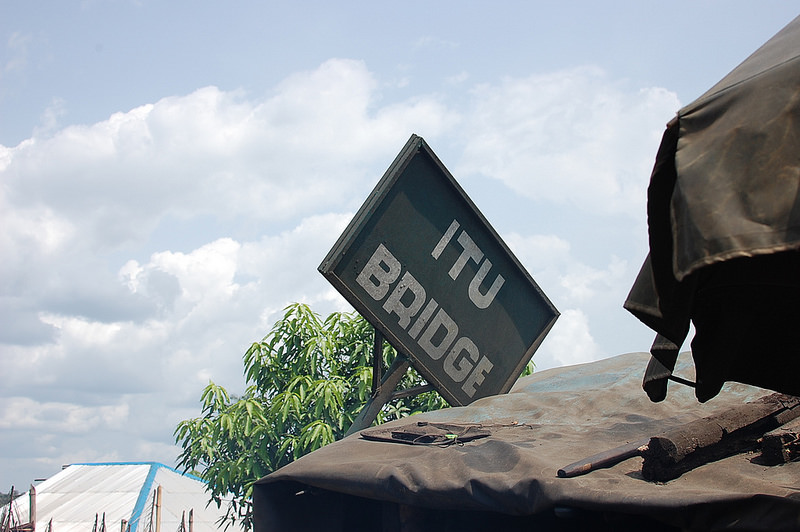 Itu Bridge. The famous Itu Bridge on the way to and from Calabar in the South of Nigeria and seafood – fresh, dried, bought, sold.

Seafood of the south. Of Nigeria, where nsam, ngolo, crabs and ‘water snails’, crabs are everyday things.

I’ve lived in Warri and Port-Harcourt where periwinkles stud everything from Egusi to Vegetable soups.

When I moved to Port-Harcourt as an adult, I learnt the art of eating Ngolo. For a long time, I didn’t know the latin/ English name till my daughter, R worked on a school project and we learnt that these are Whelks, a variety of sea snails.

I was comfortable with all those till I came across ‘water snails’ on a trip from Calabar a few years ago. At first, I thought they were mussels, not because of the shape of the shell but because of the peach-orange colour of the ‘meat’ inside. But I’ve tasted mussels and these weren’t it. 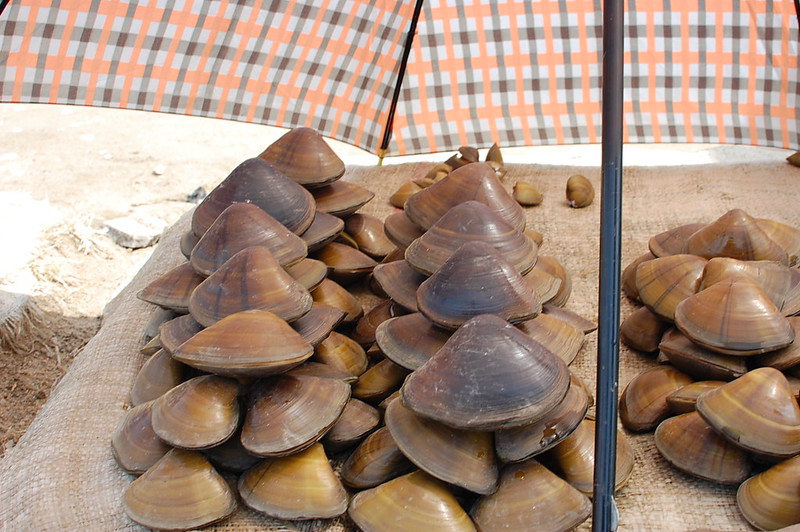 They were ‘shaded’, portioned in pyramids of about 10. 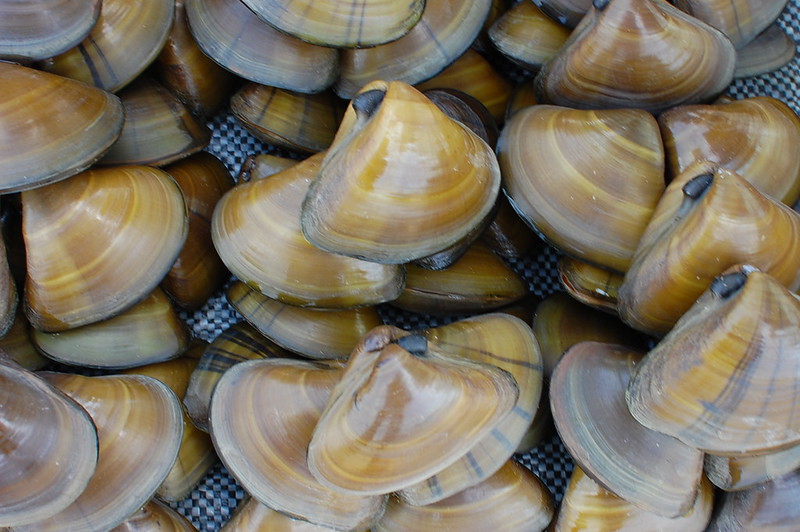 I’m used to ‘cooking’ bivalves so they open up but the seller pried them open with a knife. Hmmm.

The thing about cooking with shellfish is most people agree they should be alive if they are in the shells prior to cooking.

Two checks are performed, one before cooking and the other, after.

Before cooking, any bivalves (two-shelled) that are more than a few millimetres open are discarded. The open shell suggests they are dead – and not good for consumption. Some shell fish shut the shells when tapped.

Test two is on cooking (in the shells). After a few minutes of heating, bivalves which began the process alive should open up, revealing the ‘meat’ within. Any ones closed where probably dead at the start and thus, unfit for eating.

Anyways, I could see that most of them were shut and thus…alive. 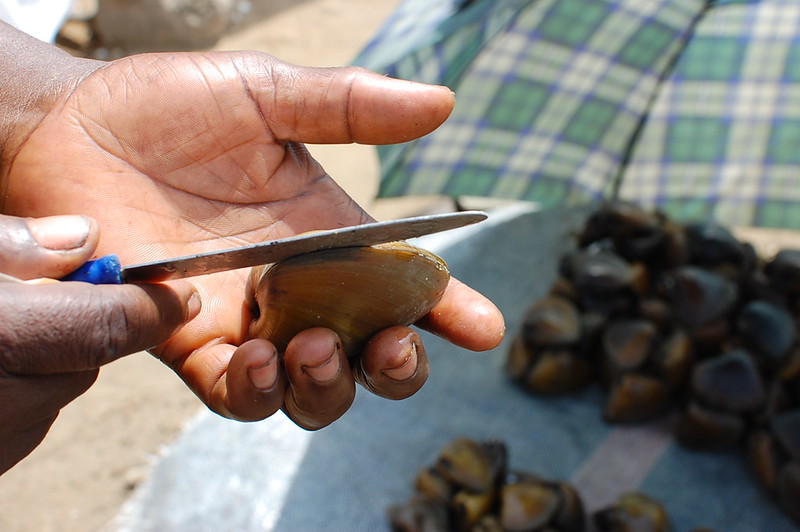 The shells opened up to reveal peachy-pink meat. 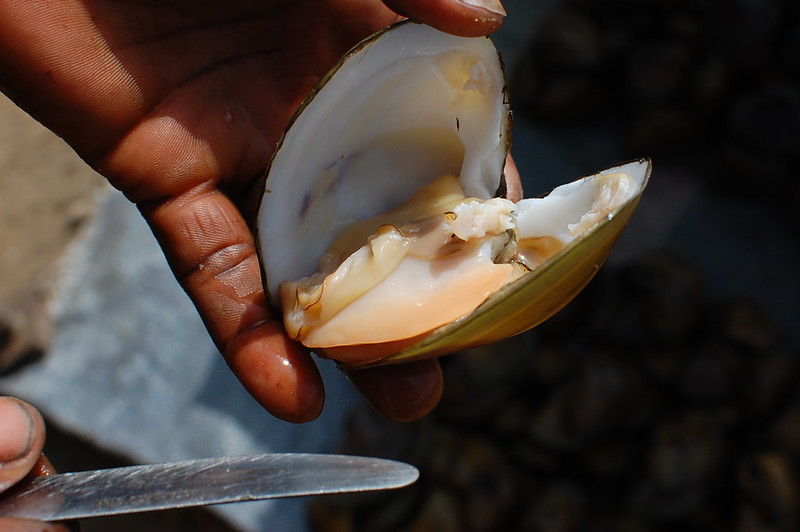 I believe she referred to them as snails because of the slime and ‘sacs’, similar to those found in land snails. She pulled the inedibles loose and discarded them. 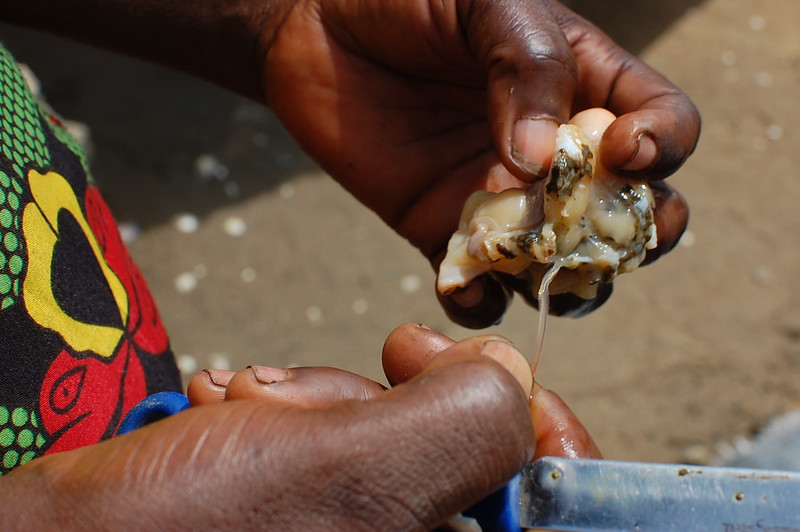 What was left, was a ‘ready-to-eat’ clam. 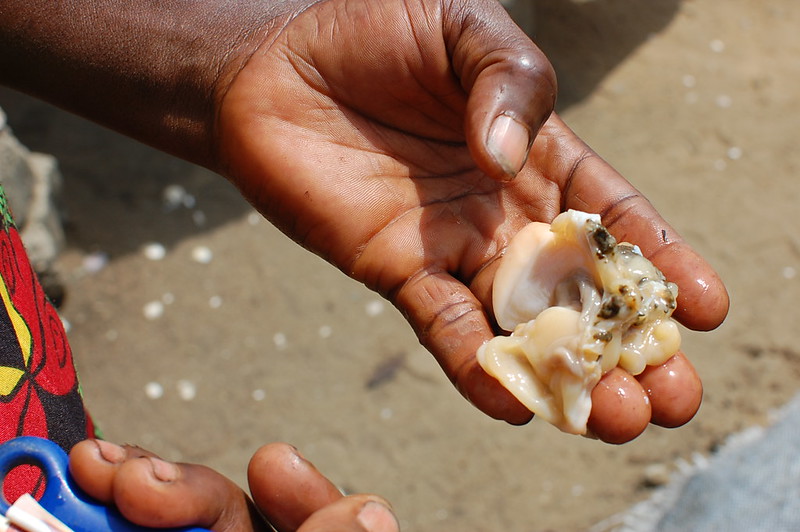 In the end, I googled ‘smooth shelled bi-valve’ and believe these are a variety of clams – Ergeria Radiata, or brown Venus clams.

The smooth clam, Callista chione, (also sometimes classified as Cytherea chione or Meretrix chione) is a rather large, temperate, marine, bivalve mollusc that inhabits sandy bottoms or with small pebbles in clean waters down to about 200 m from the British Isles to the Mediterranean.

The shell can reach up to about 110 mm Ø, its outer side is smooth and ranges from light greenish creamy colour to medium brown, probably varies to match the background; the interior is white to soft pink.

The concentric and radial growth lines are easily seen. Callista chione is edible, different dishes are prepared throughout the Mediterraneanin Spain, Italy, France, the Balkan and the Magrebcountries; Wikipedia

I took them home…but my reluctance to eat shell fish got the better of me. Don’t mind me – I worry about the waters and how clean they are. I know a lot of bivalves are filter feeders, absorbing a lot of good…and bad things from the water column. Occasionally though, I have prawns and crabs, and lobster. Sigh.

I think I ended up giving them away.

Still, it was interesting to discover them.