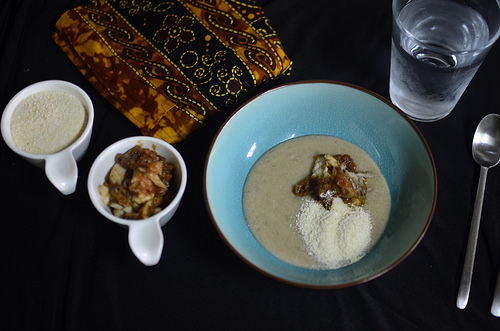 Connectedness. The thing that fascinates me the most in life. If I had to narrow down the things I find fascinating. This would be one of them.

Connectedness – of people, places and things. Brazil. Nigeria. Connected. By slavery and freedom.

In culture and cuisine. Like Carnivals. Connected, with thick tropical rainforests and love for football. Connected in cuisine. Some of which I’ve explored before, from Bean Fritters to Plantain salads.

So yes, it’s not only in bean recipes that Nigerian and Brazilian cuisine show their union, their shared roots. But its in Bean ones that I first discovered the connection. And of which I speak today.

‘The influence of African cuisine in Brazil is expressed in a wide variety of dishes. In the state of Bahia, an exquisite cuisine evolved when cooks improvised on African and traditional Portuguese dishes using locally available ingredients. Typical dishes include Vatapá and Moqueca, both with seafood and dendê palm oil (Portuguese: Azeite de Dendê). This heavy oil extracted from the fruits of an African palm tree is one of the basic ingredients in Bahian or Afro-Brazilian cuisine, adding flavor and bright orange color to foods. There is no equivalent substitute, but it is available in markets specializing in Brazilian or African imports.

Feijoada is the national dish of Brazil (for over 300 years). It is basically a mixture of black beans, pork and farofa (lightly roasted coarse cassava – manioc flour). It started as a Portuguese dish that the African slaves built upon, made out of cheap ingredients: pork ears, feet and tail, beans and manioc flour. It has been adopted by all the other cultural regions, and there are hundreds of ways to make it.’; Wikipedia 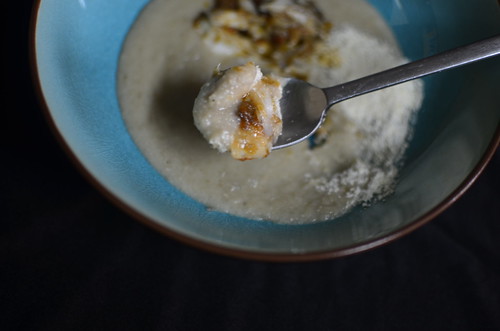 For a long time, I didn’t cook beans because I hadn’t quite succeeded in getting my children to enjoy it and then the turnaround happened. They tried it at my friend’s and now demand it.

Especially, daughter #2 who is selective.

And because I’ve worked out a successful recipe, I do it often. Because beans take a while to cook, I often make a large batch and then transform it into a few different recipes which I then portion into small containers for deep freezing.

Today’s recipe, Frejon, is an import by Brazilians to Nigeria, and is commonly eaten at Easter, particularly on Good Friday.

‘Frejon (From Feijão, which is the Portuguese word for beans) is a coconut bean soup which is eaten especially during Holy Week by a selection of Christians, mostly Catholics, across the world.

Countries where Frejon is popular include Brazil and Nigeria (especially among Yoruba who returned to Nigeria from Brazil at the abolition of the slave trade, and settled in what is known as the “Brazilian Quarters” in Lagos Island), and also Sierra Leone on Good Friday, or for functions such as weddings.

Because dairy foods and flesh meat (beef, pork, goat) are strictly forbidden on Good Friday, this dish is a suitable accompaniment to non-dairy foods such as fried fish and peppered snail.

The frejons consumed in Nigeria and West Africa are puddings made of black beans cooked slowly overnight over a wood or charcoal fire, and then mixed with coconut milk to form a thick, sweet, smooth pudding. In certain countries the dish is flavored with cocoa. The beans are boiled to a thick soft paste and blended with coconut milk. Frejon is often served with fish stew, peppered snail and Garri Ijebu.’; Wikipedia

I made mine on a Sunday. On Easter Sunday.

My recipe begins with cooked beans. And then it gets pureed with coconut milk, while warm. To make a soup kinda smooth, creamy ‘pudding’. 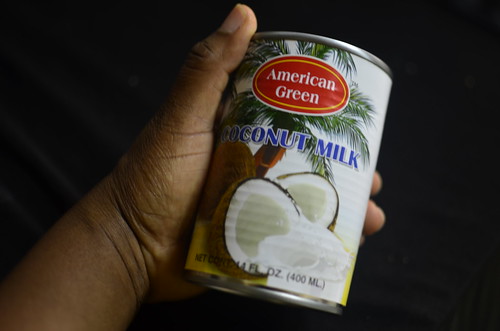 Also, when I think pudding, I think of a more wobbly, yet thicker consistency and Frejon doesn’t fall into that category. ‘; Avartsy Cooking

It is served with a ‘hot’ fish sauce and crispy garri grains.

The ingredient proportions are a rough guide to how I made mine. Feel free to adjust according to your preference.

I cook my beans till soft, in water and without salt. Salt causes the beans to harden while cooking which results in long cooking times.

Once the beans are cooked, I drain them of any cooking liquid. 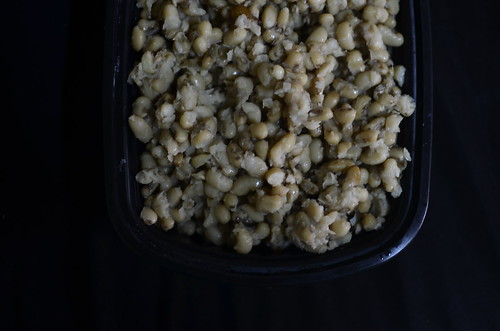 The beans go in the blender, with coconut milk. Then both are pureed till smooth. 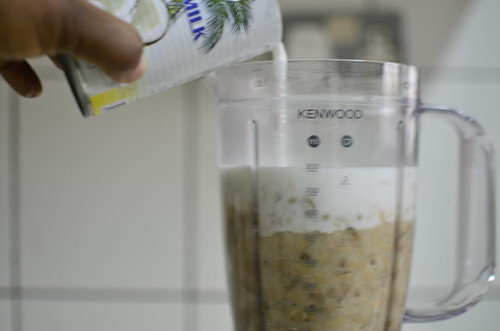 Turn the pureed mixture into a pan. Add the sugar, salt, cinnamon powder and whole cloves. Allow cook, uncovered for 5 – 10 minutes, stirring frequently to prevent the bottom from burning.

The mixture should thicken a bit in the process of cooking. 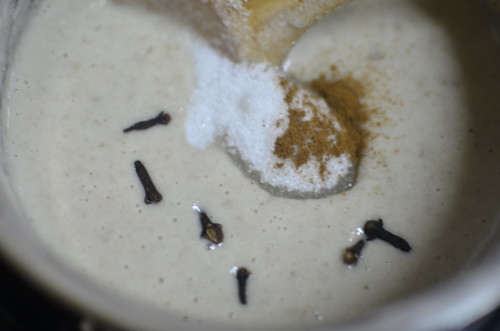 With an accompaniment of dry or toasted garri, and a peppery sauce. Like a fish sauce. 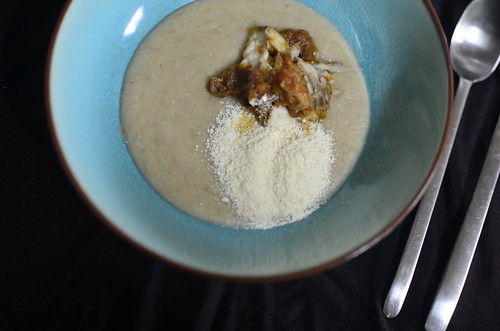 The accompaniments work out GREAT.

The resulting Frejon is fragrant with the tropical scents of coconut.

The garri adds some crunch to the creaminess of the beans, and the pepper sauce adds heat and spice. Spice to balance the sweetness of the base ‘bean-coconut’ puree. 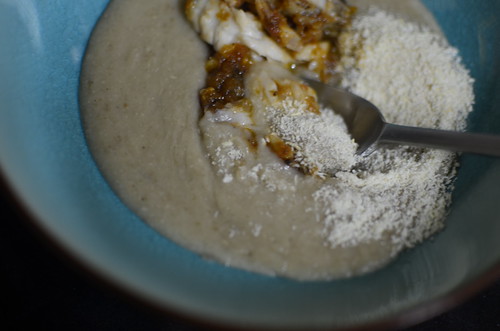 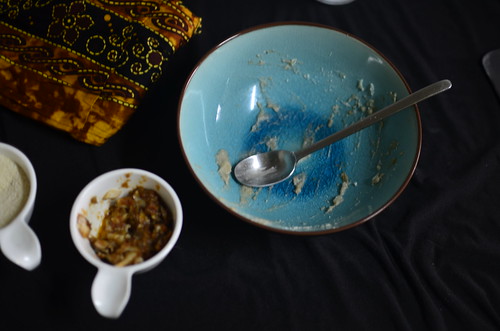