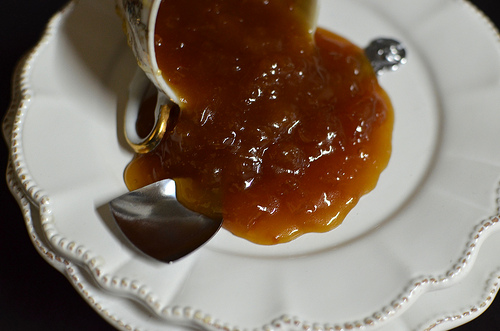 We all are replicas of other people, living in some other place. With similar thoughts. And wonders….and even actions.

Take Janet and I – twins in our desire for Meyer Lemon Caramel.

One afternoon, I sat at my office desk. I’m not sure what prompted me, but thoughts of golden, citrus-flavoured caramel were swirling around in my head.

I headed to the world wide web to have a look – I was sure great saints of the Meyer had gone before me. And sure, they had.

What made me laugh though was that they too had peered out, and with telescopic eyes dug deep to unearth a lemon caramel recipe a la Martha, which was successfully converted to one for Meyers.

Most of all, giving me a companion, for Janet of A Raisin and a Porpoise says so eloquently:

Maybe people in California throw away tired lemons. I read recently that a mature lemon tree can produce a thousand or more in a single season, and my friend Laura, who lives in a grove of the fecund little monsters, says this is a severe underestimation.  Here on the scurvious East Coast, where a person can be asked to pay upwards of two dollars for a lemon, we are not composting lemons, shriveled or otherwise.  We look no gift-lemon in the mouth.

Lemon what, though?  Lemon curd, maybe.  These were too far gone for preserved lemons. The musical phrase ‘lemon caramel’ came to me, and I checked to confirm that what I thought might be my own idea had in fact occurred to numerous people before me (the primary function of the internet). Indeed it had.  It had occurred, for example, to Martha.  But three tablespoons of lemon juice was not going to get me very far through this bag.  Plus, as you may have surmised, I very rarely find myself saying, ‘that was a little too lemony for my tastes.”  Half a cup did the trick, cutting the sweetness nicely.

I burst into laughter for it was the same way I came to the conclusion that lemon caramel was it. Not quite wacky but ‘weird’ enough to appeal to the ‘creative’ in me.

With two tired lemons left of my treasure box, one was destined for caramel, while the other…still awaits its fate. A fate of lemon bars – I’m convinced! 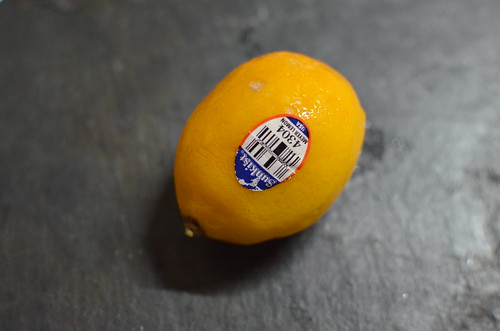 The night I made it, I was tired….from work. I wanted no dinner, couldn’t eat a thing. Till the caramel was made…and then I hungered, for some sauce ladled over a slab of Meyer Lemon Ice-cream.

I couldn’t wait for the ice-cream to thaw, so I could make a nice ball of it. No sir, I uprooted the slab, stuck as it was in a shallow bowl. I ladled some of the Meyer Lemon Caramel sauce over it, finished with some flaked salt and settled down to watch TV.

I desired candied chunks of Meyer lemon so I was happy to go with what my old Braun processor gave. Chopped. Or did I understand that my old food processor could only give what it gave and so was happy with larger bits? Sigh. Chicken or Egg. One will never know. Either way, happy was I with my lemon flavour. 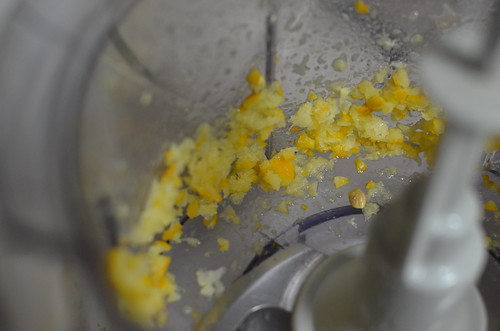 In a heavy saucepan, combine the sugar and water over medium heat.

Stir occasionally till the sugar is dissolved and the syrup is clear. Bring the mixture to a boil, about 4 minutes.

In the next stage it is important to stop stirring, otherwise the mixture will crystallise.

Turn the heat down a bit and continue to cook, swirling the pan from time to time, until the mixture is a medium amber in colour. Another 8 minutes or so.

The recommendation is to wash down sides of pan with a wet pastry brush to prevent crystals from forming.

I didn’t do this and could see some crystals forming, thankfully they didn’t affect my sauce. Perhaps I was lucky….don’t take the chance, ok?

The mixture starts off as a glassy light yellow. Not quite sunny. Not the colour of stained glass. More like the colour of translucent candied lemons. As the heating continued, the bubbles grew smaller, while some clustered in big masses (compare photo below, with that above)

Remove from the heat and dump in the blitzed lemon mixture and the butter.

Note, keep from putting your face over/into the pot as some spitting may occur. 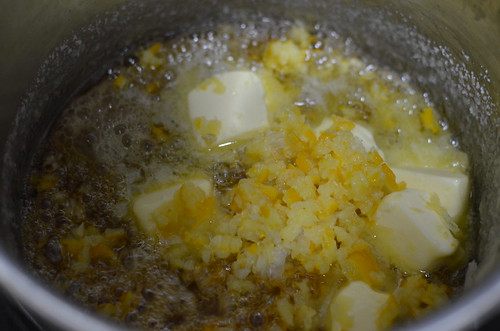 Return to the heat, stirring until the mixture is combined, the butter melted and the makings of a sauce begin.

Keep on a low boil for 2 -3 minutes and watch the colour change to amber brown. Right before your very eyes. 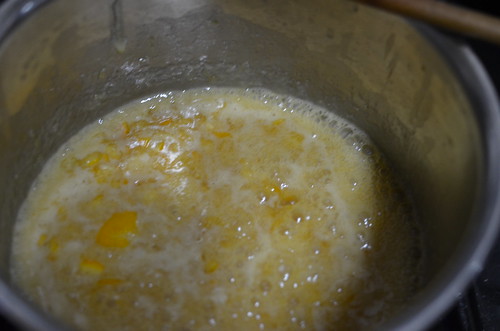 The mixture will thicken as it cools. Mine was the colour and the consistency of ‘honey’, at room temperature. I poured it into a clean jar, and proceeded to ‘taste’/test it by the spoonful. It was yummy. Barring the occasional ‘bumping’  bit of pith. 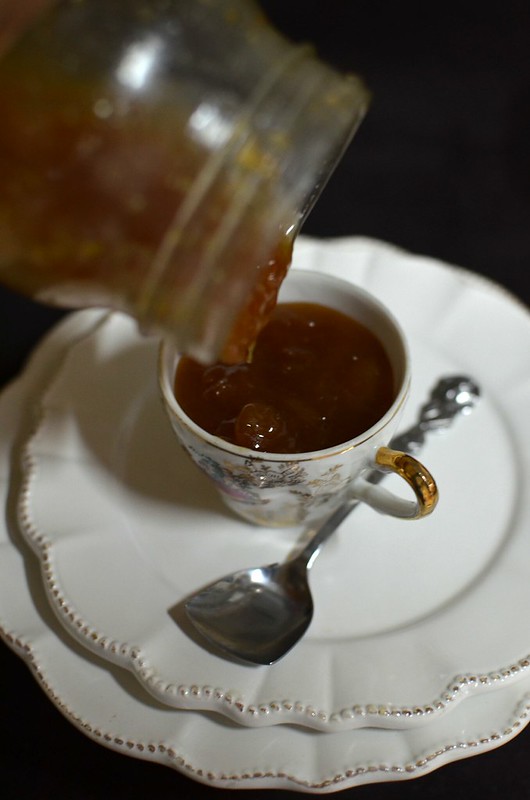 On ice cream it was great, but scooped over a slice of apple cake, sprinkled with flaky salt and sharing space with a quenelle of crème fraiche, it was DIVINE. 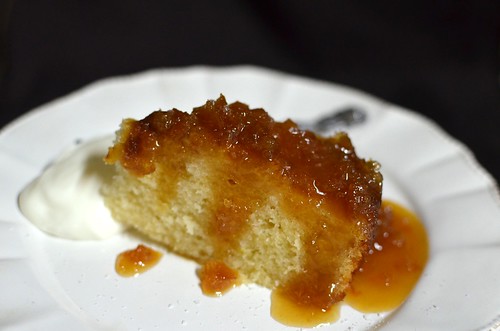 As my daughter, J described it, ‘….it tastes like caramel marmalade’. I hope you get the picture. 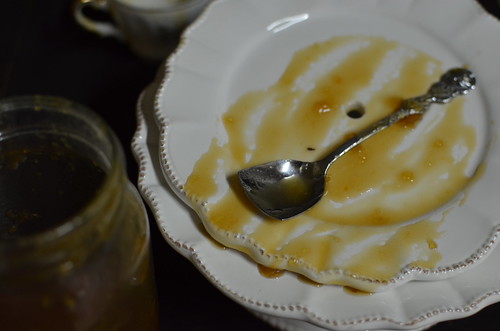 And can imagine the taste.

The final word: the possibilities for use are endless. Pancakes, Waffles, Toast. My daughter swirled some into crème fraiche and proclaimed it tasted just like caramel and ‘plain & natural’ yogurt. I had to try it to verify.