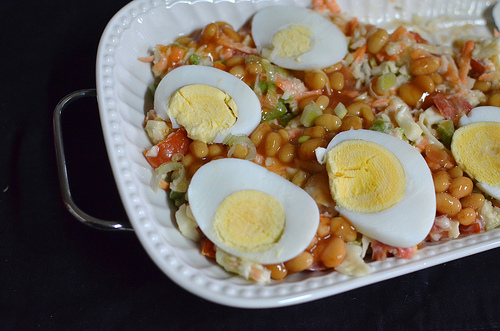 One I think about, sitting in the lounge and waiting for the boarding announcement for I am well and truly on my way home. Home to Nigeria. To my husband, and children and the December heat.

To a Christmas feast, of gifts and presents and maybe even food, which may not be cooked by me with my Christmas eve return.

I didn’t do half the Christmas food shopping I wanted to do here – I wanted to take back fresh cranberries and brussel sprouts, Meyer lemons and Philadelphia cheese. But……its fine. I’m learning to live… without disappointment even when things don’t go how I planned. 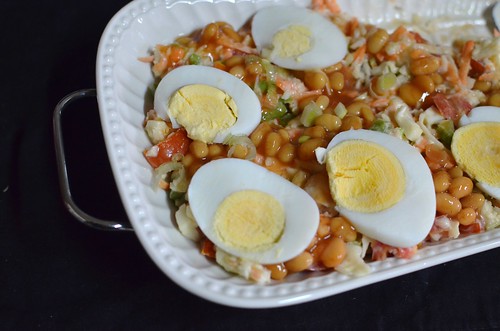 So, back to Nigerian salad which I haven’t had for years! This coleslaw-based salad is known by Nigerians the world over as salad.

Don’t look at this bottle of salad cream in disdain. Please. I did the same. And ate my words. 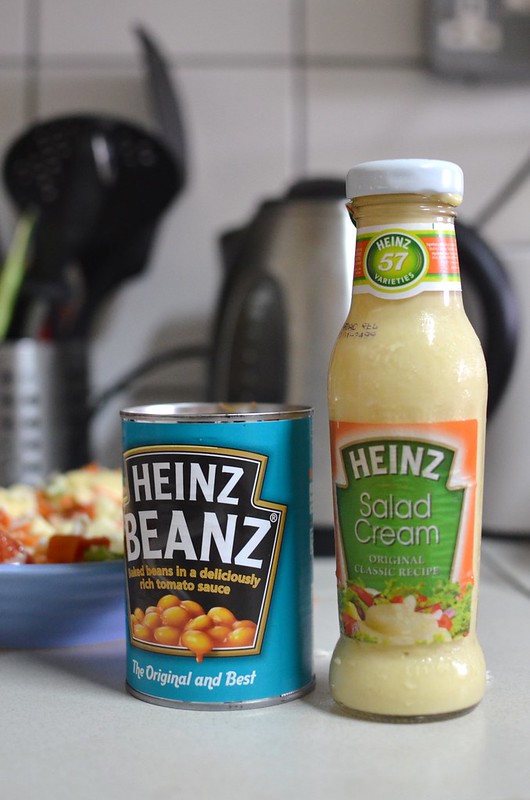 Often, looks of dismay appear on the faces of ‘Nigerians in diaspora’ when at a non-Nigerian event they are offered greens, lightly tossed in oil and vinegar. Well-seasoned too. And healthy. But called salad.

Most of them love their greens and all but they would gladly give it up for salad cream-soaked salad. They may understand it but they have a hankering for home that can only be assuaged by Nigerian salad.

Carrots, cabbage (even Coleslaw), chopped tomatoes, bell peppers, chopped cucumbers and whatever else you like are tossed in dollops of cream. Salad cream. This isn’t for the faint of heart. This cream is delicious and in my disdain I forgot just how good it tasted.

So I need to enquire. Are you familiar with salad cream? A mayonnaise-style liquid dressing that flows easily from a glass bottle? Is that a nod I see? Well, me too.

I’m partial to Heinz, the brand. They are who I know. From the British, a legacy of colonisation to Nigeria and one that we, Nigerians are happy to retain. To be honest, the Brits too loveeeee the stuff, and have since 1925 when it was first bottled.

From Wikipedia: In the UK it has been produced by companies including H. J. Heinz Company and Crosse & Blackwell. Heinz Salad Cream was the first brand developed exclusively for the U.K. market. When first created in the Harlesden (London) kitchens of Heinz in 1925 the preparation was done by hand. The jars were packed in straw-lined barrels- 12 dozen in each. The work schedule was 180 dozen jars a day- with a halfpenny a dozen bonus if the workforce could beat the target.

It is interesting that this creamy yellow condiment with a base of emulsified oil, egg yolks and vinegar has only arrived in the United States in the 21st century, where it can now be found in major retail supermarkets.

Anyways, creamy it is, but that isn’t all. Salad cream has a great tangy sweetness so I know that the ingredient list is longer than that vinegar, water and egg yolks. There is sugar, and salt and spice. Maybe even mustard.

Apparently, it was developed as substitute for Mayonaisse, during the wars when things were rationed.

The Daily Mail says: But the tanginess that made it so popular during the war still appeals to the British palate today: salad cream sits proudly alongside such spicy national favourites as piccalilli, horseradish and chilli sauce.

Like mayonnaise, it contains egg yolks, vegetable oil and mustard – but the principal difference lies in the amount of vinegar, as well as the water, which helps to thin down the sauce to a pouring consistency.

You can, of course, make your own, and many chefs believe they can improve upon the original. Richard Corrigan, for example, made a version on BBC2’s Great British Menu using equal quantities of evaporated milk and rapeseed oil, whisked together with caster sugar, English mustard, white wine vinegar, salt and pepper. 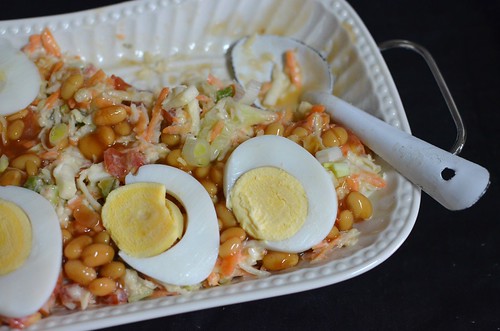 So yes,  salad dressing is slightly sweeter and tarter than mayo, creamy but not like mayo too.

My version is the very ‘basic’, non-amplified one.

I begin with a base of sliced cabbage (it can be grated but it’ll be finer and wetter than if sliced), grated carrots, chopped spring onion greens, chopped tomatoes and cucumbers. This is dressed with salad cream to taste.

Sometimes, the ‘dressed’ mixture is placed on a bed of lettuce and other times it forms the bed. Like in my case.

Some people might add boiled potatoes, and tuna, or chicken to this base mixture or choose to layer it.

Then typically, comes baked bean. I love Heinz. The brand again. I’m so used to it.

After the baked beans (and peas), the garnishes follow – slices of boiled eggs, tomatoes and cucumber. And then it is ready. 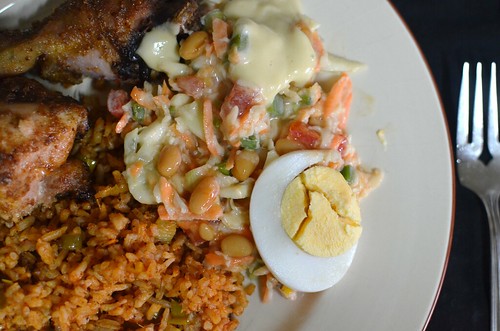 Toss with salad cream and layer into a dish.

Continue by adding the baked beans.

Garnish with the hard-boiled eggs then cover and refrigerate till cold.

Lots of love from JFK airport. I need to go board my flight now.

I should ‘clock’ in to wish y’all a Merry one once I arrive home….but here’s saying it just in case:

Have a WONDERFUL CHRISTMAS celebration.

I am thankful to God for yet another Christmas holiday. Lots of love X  X X