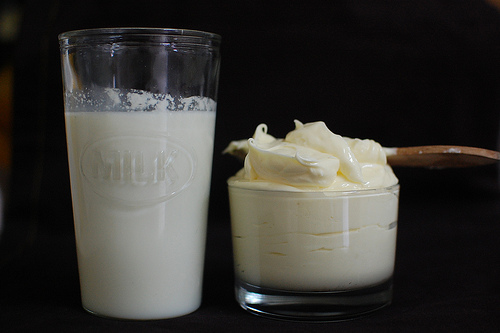 I’ve got my arms around something.

Its butter! But not just any kind of butter. And no, not sticks. Its real butter. Homemade butter. Le beurre fait maison.

And I’ve only recently happened upon it. It was only a matter of time though….wasn’t it?  A natural, organic progression from whipped cream to soft cheeses to beurre. And even buttermilk.

Saying that, I have a thing for beurre noisette and that’s twofold. It’s something in the taste, but also in name, the origin of the name. Nutty, caramel notes of browned butter, paired with flair and sophistication in verbally puffing out the ‘beurre’, left shoulder lifted and neck arched upwards.  Boy, do I love French loan words – produit du terroir, faux pas, beurre noir (black butter), italicized in English and making ladies and gentlemen of any, who with confidence say the words.

But back to homemade butter.

See the last two months have been HARD months. You might have noticed my infrequent and sometimes short posts. 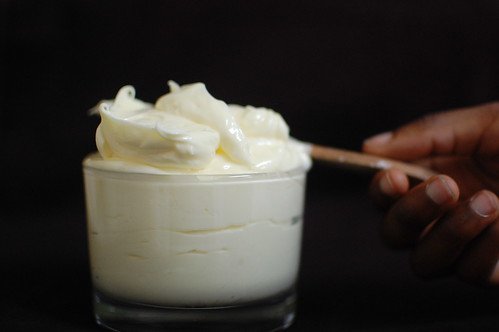 That’s because for the first time ever in my almost-10 year career (or job – and yes, there is a difference but more on that some other day), I worked 80+ hour weeks. Do you know what that means? It means I went to work at sun-up and didn’t return till sundown. It means exhaustion has left a faint trail in my bones. It means I worked Saturdays and Sundays and it means that now when I read about doctors in the US working 70+ hours per week, or chefs having no time to rest, I know exactly what it means.

But that’s not all.

Though those weeks were hard, I learnt a lot.

I learnt that I am much stronger than I think. That a glass of mint tea can change everything. That just by ‘chanting’ positive messages, I can re-inspire, revive and even re-invigorate myself and find the courage and strength to go on. I learnt that when I commit to do things, even difficult ones, I can actually follow through. In this case that included eating right and drinking a lot of water. I also learnt for a fact that the hold of ‘food’ over me is permanently gone.

Through it all, I promised myself that life would go on as ‘normal’. I would go out to lunch with my friends, I would cook and bake, spend time with my children, and live. 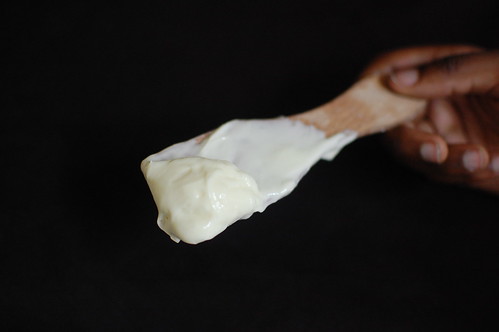 And I did. ish. Sure, I didn’t watch as much TV as I wanted, or sleep as long as I desired or cook as much as I wanted to but for the first time, I didn’t let stress, work, fear keep me under. And the result,  ladies and gentlemen? Lots of wonderful discoveries.

First there was butter, and buttermilk. Totally easy and completely delicious. Whip butter into a frenzy, watch it curdle under the pressure of whirling blades, see buttermilk step aside and separate itself from curds. Strain and there you have it. Butter. And who cares that its 11pm and everyone’s asleep. Does it make that creamy delight any less desirable? No. A pinch of salt, some stirring and smoothening, and then the whole thing is piled into a small freezer-proof bowl and is frozen. 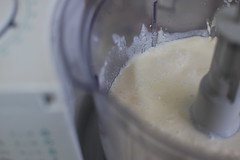 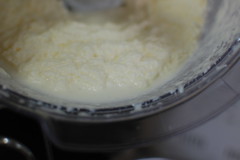 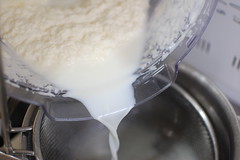 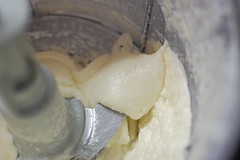 Untraditional perhaps, no rinsing, no patting, nothing but no less delightful. And all this from Pasteurised whipping cream. Most of all, I could give my kids a lesson in ‘how things are made’. Now they know the truth, the glorious truth about butter….. 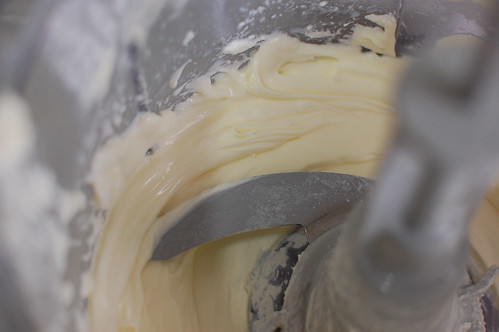 I liked the buttermilk, and while not as thick or as tart as I know it to be, it was wonderful to be able to recreate it and have it form a pool for chicken strips, subsequently rolled in a trio of flours & crumbs  (rice, semolina and bread crumbs), for the most delicious chicken tenders you’ve ever tasted. Totally Southern Fried.  With a quick and easy mango sauce? Heaven. 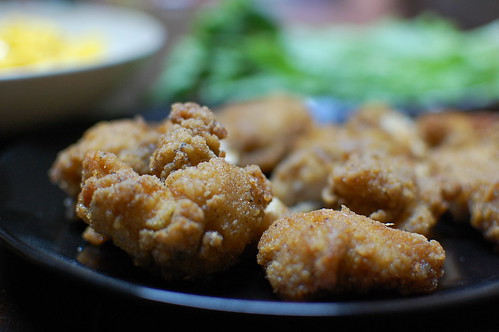 And then over the weekend, I taught my friend to make butter. When we strained off the buttermilk, I grabbed the closest thing to hand – it was a double-walled insulated food flask, for one of the kids. I tipped the buttermilk into it not even thinking it would ‘incubate’ as I tend to see pasteurised milk as ‘dead’. Anyways, the following day, I opened it up to decant the milk and it had thickened, almost to the consistency of (not Greek/thickened) yogurt. Another tick and plus for UHT cream. It is definitely not dead! 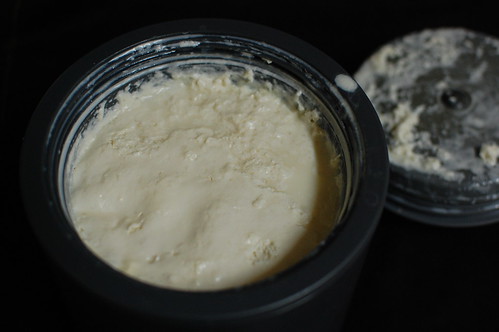 Everything this butter touches turns to gold. dust. Disappears in a cloud of deliciousness.

Think Vanilla pound cake – the moistest, finest-crumb cake I’ve ever made. My second attempt at this pound cake, with store-bought butter was a failure – dry. 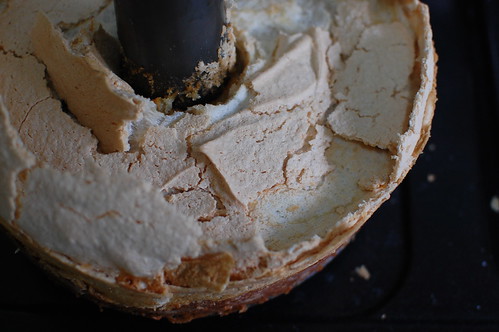 Recipe to follow, but in simple terms – sponge mix, topped with a meringue mix. Bake. Set. Eat. Any problems with that? 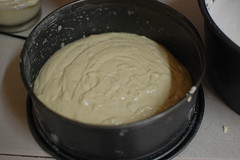 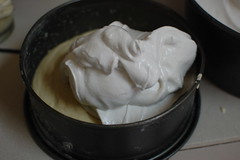 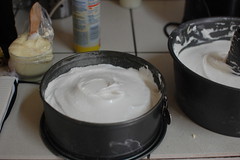 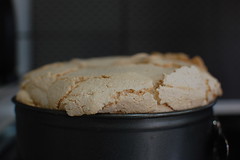 Then there were doughnuts, which I’ve always been afraid of making but finally conquered on a Sunday morning, when my nieces were here for Brunch and before I left for the office…… They were so good, and I’d only made a small batch….terrified of first time failure. 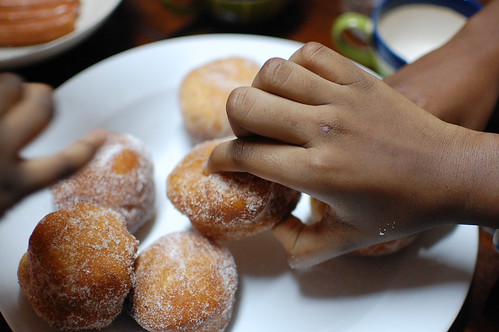 Some were stuffed with a poor-man’s version of my strawberry-cardamom jam (using store-bought jam, with freshly crushed cardamom pods). 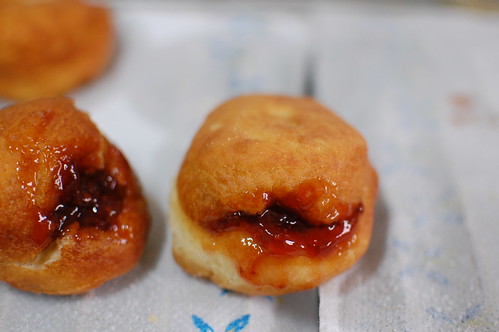 To the demand of my kids, I made some more a few days later, exploring other kinds of doughnuts, to their delight.

I finally got with the ‘doughnut holes’  program, after making ringed doughnuts, and finally made jam-filled ones. I still have a desire to make custard-stuffed doughnuts, my absolute favourite!

Funny enough, my kids didn’t like the chocolate glazed ones(????). They loved the sugared and orange-glazed rings. So much for being chocolate lovers.

And all this goodness, fathered by a pack of whipping cream. Wonders will never cease. 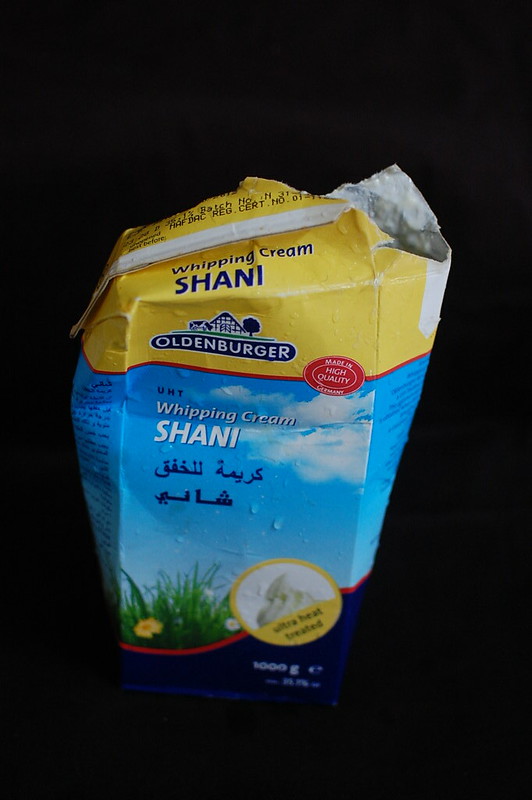 And I wouldn’t dare leave without sharing a recipe. At least one.

My version is one that my former Swedish neighbour shared with me in 2010. Her version was a tray bake, topped with fresh strawberries and lemon curd whipped cream. I BEGGED for the recipe afterwards.

Fast forward to 2012 and I made this for my neighbours at a small party we held on Worker’s day. It literally vanished off the tray, served with a homemade strawberry sauce (from saved, frozen strawberries) and whipped cream. I’ve reduced the sugar in the original recipe and am still tinkering with it.

Your version is up to you! Think coffee flavours, garnish with chopped nuts, make the meringue that lights your fires, and feathers your tongue.

Whisk the egg whites until stiff in a clean, stainless steel bowl. Add half the sugar, whisk again until stiff, then repeat with the remaining sugar and vanilla extract. Set aside while you make the sponge. The result should be a glossy, white meringue with body.

In a large bowl (with a hand whisk/stand mixer), combine butter and sugar and whisk till pale and creamy, light and fluffy. Gradually add the egg yolks, one at a time, combining well after each addition.

You will alternate, in 3 – 4 additions, the flour mixture and the milk, starting and ending with the flour. Add the vanilla essence with the last portion of milk.
Once done, divide the batter evenly between the two pans and then spread the whipped meringue over the top, carefully levelling it out.
Set in the middle of the oven and bake for 30 minutes, or till ready. Test for doneness by inserting a skewer in the centre of the cake. The cake is done when no moist, sticky bits cling to the tip of the skewer or toothpick.

Serve with chopped fruit and whipped cream if you like.