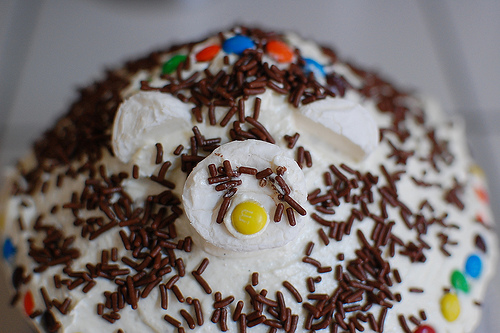 Is not a word I’d use to describe me. Myself. Is that bad English?

I am intrigued by butter. Sticks of butter. The allure of reading American recipes that call for a ‘stick of butter’ hasn’t worn off……and I can count January the 8th as one of my best days in the history of food! Because in a shop round the corner from me, a shop that has given me graham crackers and cheese, gianduja chocolate and Marrons de glace….I found sticks of butter. 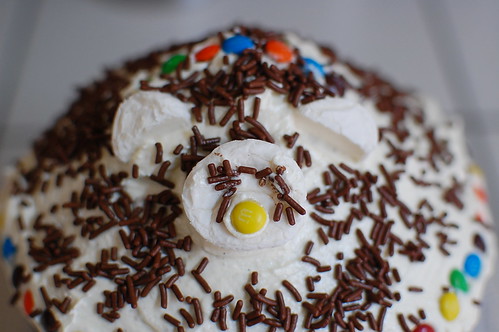 Do you hear me? Sticks of butter.

Now if you had sticks of butter on your wish list…just seeing them, hugging and holding them close was a dream come true for me. Do you understand my desire, lust, infatuation? Infatuation….that has seen me buy 10 boxes of 4 quarters. Or 40 sticks.

That is something significant for 40 is a special number, isn’t it?

According to the father of all knowledge encyclopaedic, Wikipedia, Forty is an octagonal number, and as the sum of the first four pentagonal numbers, it is a pentagonal pyramidal number. Adding up some subsets of its divisors (e.g., 1, 4, 5, 10 and 20) gives 40, hence 40 is a semiperfect number.

The point is my 40 sticks of butter bode well. Even if only 16 are left.

To understand a people, you must live among them for 40 days ~Arabic proverb

If I had to describe the butter, pure heaven is what I would say. Rich, creamy, smooth and incredibly tasty….even though it is unsalted! So now, I’ve added American butter to my list of ‘best’  butters that include some of France’s finest and Italy’s too.

And what better way to end the life of a stick of butter than in a cake, (lauded for its easy and spectacular results), than Amanda Hesser’s Chocolate Dump it all cake.

To put things in perspective, since December the 15th 2011, I have made this cake  9 times!

And with promises of cake for my children’s school classes, I reverted to my newly trusted, my never-failing ‘go-to’ recipe…..and ended up with gushing thanks from school mates and teachers alike. They make great cupcakes as well as whole ones.

For Christmas, we had a party – all the neighbours and two cakes graced the table. One sported a minty white chocolate frosting, simply divine and courtesy of Deb/Smitten Kitchen via Jenny/Food52. Stellar topping this is.

And the other, sported a nutty ganache in the guise of Gianduja, hazelnut flavoured chocolate. The same frosting that graced an office table this afternoon when a colleague was leaving! Amidst tears, this cake soothed souls! And bellies. 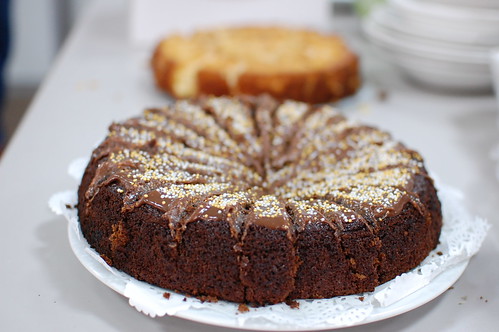 I have performed all manners of experimentation, deviations and even survived a mistake or two. It appears one can do no wrong to this recipe. Is what I’m trying to say. All hail Judy Hesser.

The mistake? Well, the recipe calls for a cup of water and on one occasion I put in two. Panic ensued but I decided to leave the caskes to bake till they were ready. They were ‘done’  in the same time and though they didn’t have the classic chocolate flavour, the cake was delicious and close to the moistness of a red velvet cake. Two cakes still got demolished in record time. Some people (not me, mind you) had it for dinner and breakfast! 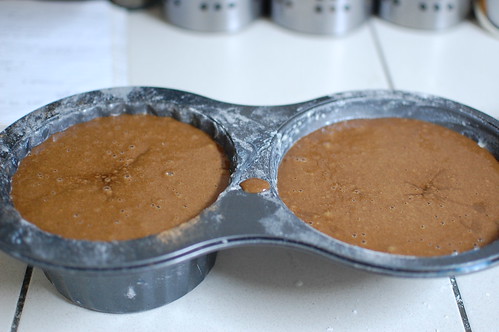 I have learnt a lot in the process. 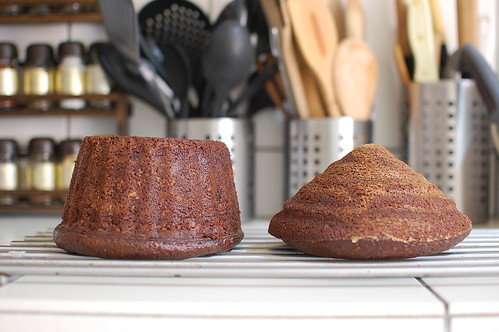 The original recipe calls for caster sugar and I’ve made it with both brown and white, I prefer the brown sugar version by far. It isn’t as ‘sugary’ as the white version and has more depth of caramel and toffee tones, not to mention being ‘smooth’.

This is about the only time I think dark chocolate really works in a recipe! My milk chocolate version was more ‘cocoa cake’, than deep, rich chocolate. (The darkest chocolate I’ve used is 85% cocoa solids and it turned out luscious!)

I’ve used champagne vinegar instead of cider vinegar, and it worked very well though I got a better rise with the cider vinegar

I’ve baked the cake in all manners of pans – as cup cakes, in regular round 9 inch pans, in springforms, and most exciting, in a giant cupcake pan! 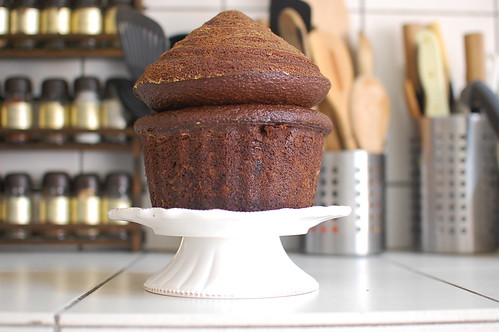 Changes to the recipe highlighted in green

Pre-heat the oven to 180 degrees C or (375 degrees F), and place a baking sheet on the lowest rack, to catch any drips when the cake bakes. Put the sugar, unsweetened chocolate, cocoa powder, butter and 1 cup of water in a saucepan. Place over medium heat and stir occasionally until all of the ingredients are melted and blended. Remove from the heat and let cool slightly.

Meanwhile, sieve together the flour, baking soda, baking powder and salt. In a small bowl, stir together the milk and vinegar.

Grease and flour a 9-inch tube pan or two smaller pans (which I personally prefer). I tend to grease the pans, line them with parchment and then grease and dust with cocoa powder. This is not necessary, but parchment does make getting the cake out easier. 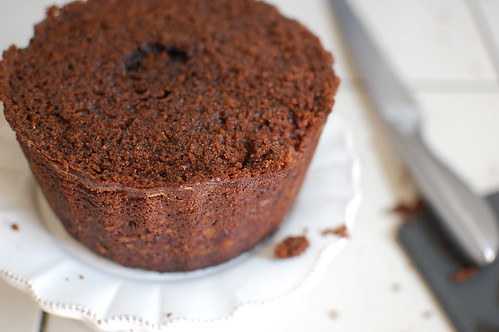 When the chocolate in the pan has cooled a bit, whisk in the milk mixture and eggs. In several additions and without overmixing, whisk in the dry ingredients. When the mixture is smooth, add the vanilla extract and whisk once or twice, to blend. Pour the batter into the tube pan(s) and bake on the middle rack until a skewer inserted in the center comes out clean, about 30 to 35 minutes.Let the cake cool for 10 minutes, then remove from the pan and cool on a rack. (This can be tricky – if someone is around, enlist them to help. Place a ring of wax paper on top of the cake so you have something to grab onto when turning it out.) Let cool completely. 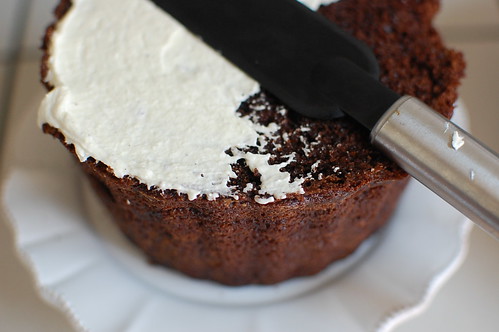 Frost with your topping of choice!!!! 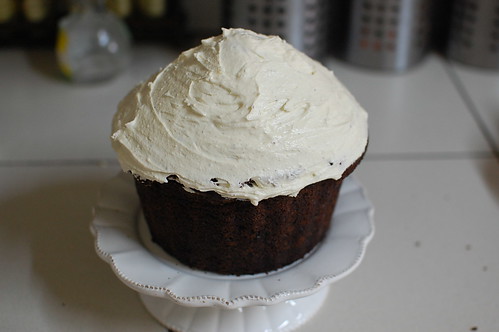 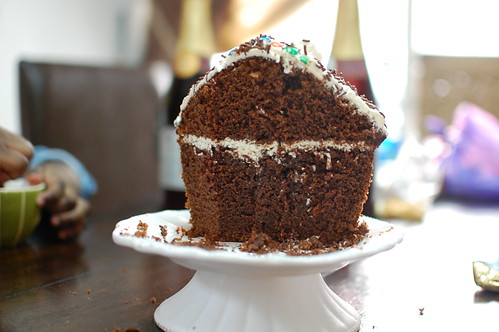 I promise you – there’ll be no regrets! Have a wonderful weekend! One love.