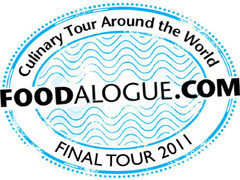 Today we begin in Panama, a country famous for its canal, its bridge linking North and South America. 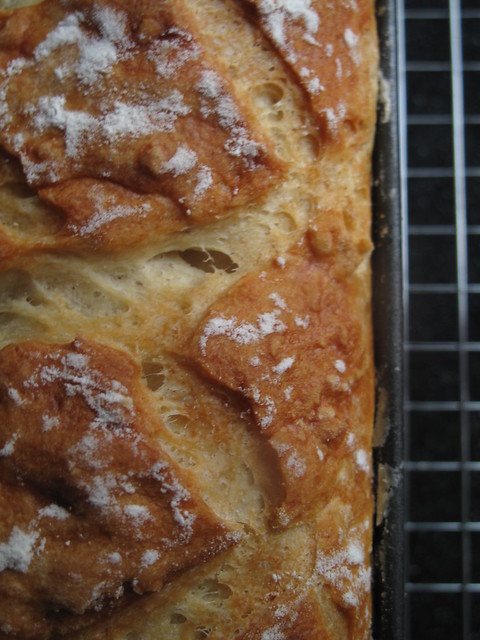 I am delighted to say that my degree of separation with the linear land has been narrowed, after all I am well versed with the Panama hat, the canal and I actually know a Panamanian lady. Three things I’m sure at least 100 million people in the world can boast of. Nevertheless, I thump my chest and take pride in the simple, common pleasures of my limited knowledge. I have said to myself, that this year I will act ‘healthy’ mostly. Physically and mentally – cupboards & refrigerators must be cleaned out, kitchen experimentation carried out with purpose and focus on economical actions (so, no waste) and consciousness on really growing cooking/baking skills. Like how to make bread.

And so when faced with numerous delicious Panamanian recipes, I skirted past the Patacones, numerous Tres Leches cakes and settled on making a loaf of Micha bread.

Once the decision was made, I got in touch with my Panamanian friend, I and asked her some questions about the bread – its origin & how it was served. Thankfully, she has 2 chefs for brothers and they were able to give some more detail.

First up, Micha bread as I know it is called “Pan Michita” in Panama. It is made from an enriched dough, using milk and butter to create a soft, flavoured bread.

According to I, The French brought it to Panama when they came in the 1800s in the early attempts to build the Panama canal (long before the Americans). Now, it’s no secret about the French and their ‘Pain’. Unfortunately, in Panama at that time, the French couldn’t find their beloved thin, crisp & golden crusts housing soft, holey centres,  so they taught the people how to make Micha bread. The people couldn’t pronounce Micha properly, so it ended up being known as ‘Pan Micha’ or ‘Pan Michita’.

Originally this bread was a typical breakfast loaf, commonly eaten with white cheese and/or eggs and drunk with coffee or lemon leaves tea. Today, it is served in restaurants with pastas and dishes with sauce.

Glad for I’s ‘info-education, I went on to see if I could uncover more about the bread. I couldn’t find much about Micha but when I looked up Miche, I discovered that the French have a loaf by that very name. So…..did the Panamanians actually ‘Spanishfy’ Miche and make it Micha? It is certainly plausible. Seeing the names differ by only one letter, and knowing it was the French who brought it…… 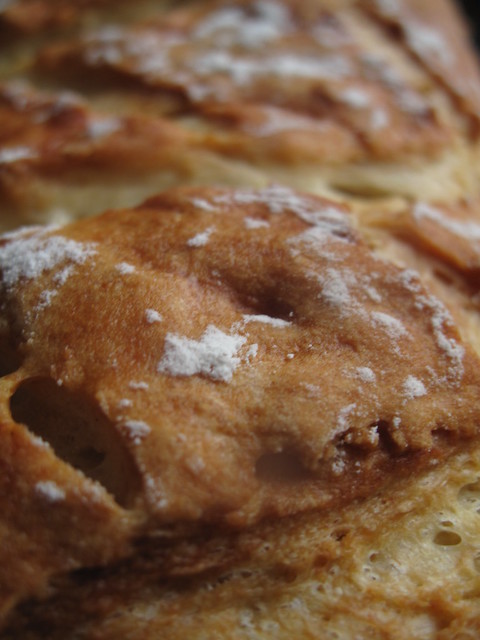 Wikipedia describes the Miche as ‘a large round loaf’, also known as Pain de Campagne.

WikiAnswers says ‘Une miche’ (feminine) is a old term used to mean a plump loaf of bread. The term tends to disappear with the standardization of loaves.

Recipe Tips says ‘The term Miche may be used to describe breads shaped similar to a boule or it may also be used as a designation for large, rounded rectangular, country style loaves

I no longer need any convincing – though the French didn’t build that canal, they left a solid bread bridge legacy. And oh what a worthy one it is!

I aspired to bake a loaf with that ‘rustic’ look, possessing a great, golden/thin crust with a mie (inside, French) with great texture  – soft & spongy, with a milky colour and air holes. And taste. Did I succeed?

Dissolve the yeast with 1 teaspoon sugar in a bowl with the warm water. Set aside for five minutes. The active dry yeast should be bubbly/proven before use, while the fresh yeast is good to use regardless of ‘proof bubbles’. 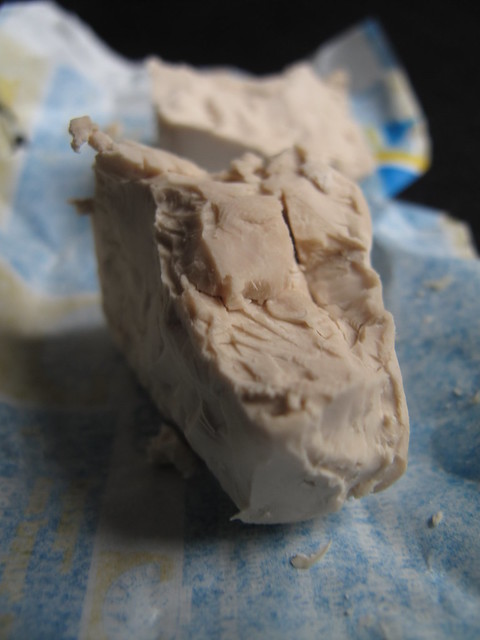 Add the liquid yeast mixture to a large bowl/container with a lid. Then pour in the melted butter and warm milk along with the rest of the sugar. Stir to combine and then begin to add the flour, little by little, mixing with a wooden spoon. The dough is ready when it is evenly moist without any dry patches. Cover the dough with a lid or loosely with clingfilm/plastic wrap. Allow the mixture to rise at room temperature until it begins to collapse, about 2 hours at room temperature. After two hours, my dough was still rising, so I put it in the refrigerator to continue the process and went to bed.

Prepare a clean surface and lightly grease a loaf pan. Then dust the top of the dough with some flour and remove from the container onto your work area. 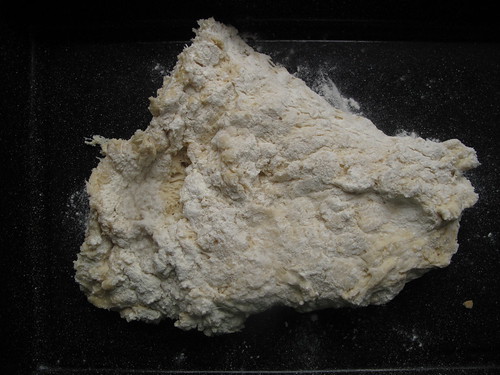 Gently shape the dough into a rough rectangle and prepare to make the ‘French letter fold’. 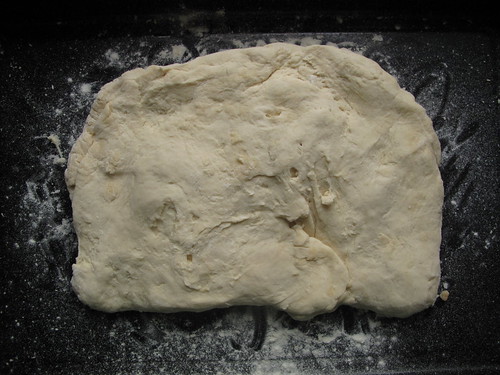 Put the best side down (which will end up as the top crust) and begin. Bring in one side of the dough, to the centre and follow with the other side. Be gentle so as not to push out all the air.  Pinch the seam closed from one end to the other – it should look like a long, weird calzone. 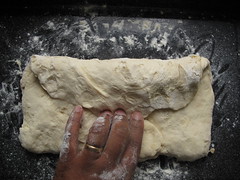 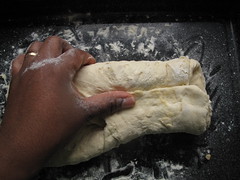 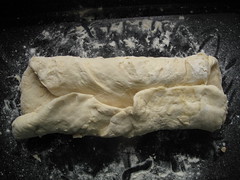 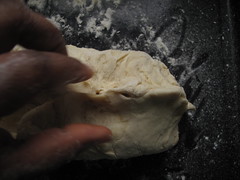 You want to shape your dough so it  fills just under half of the pan  – this will give it room to rise properly. 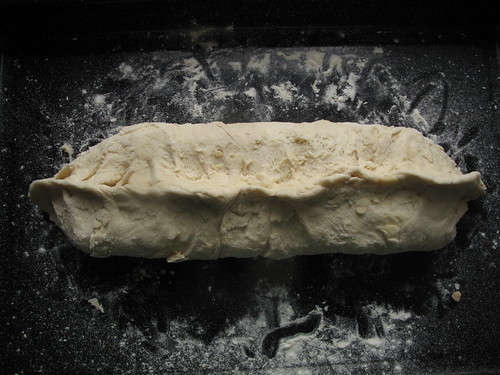 Gently turn the dough over so it is seamside down. To seal the end, using the side of your palm, press down one end to make a groove. 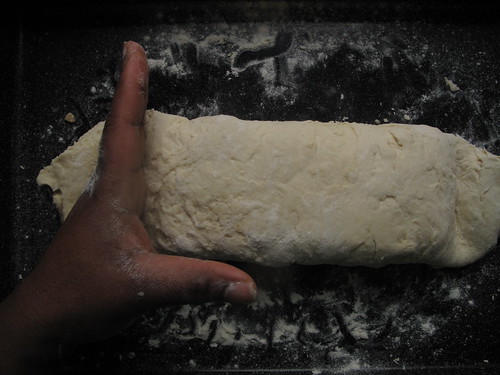 Then fold the tapered end under the dough. Repeat at the other end. 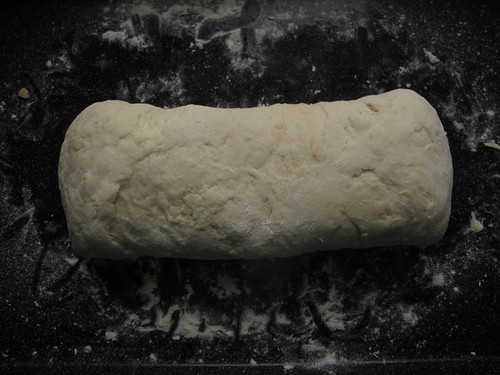 But first stop and admire your handiwork. A real piece d’art! 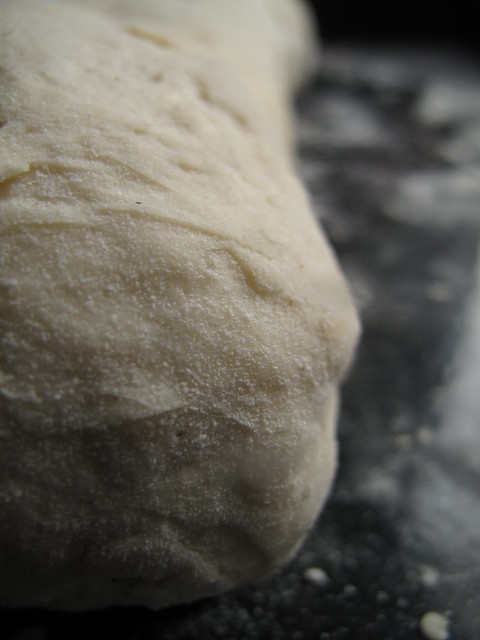 Place in the greased pan and then spray the top with some (olive) oil spray (to prevent the dough from sticking to the clingfilm) and cover with cling film. 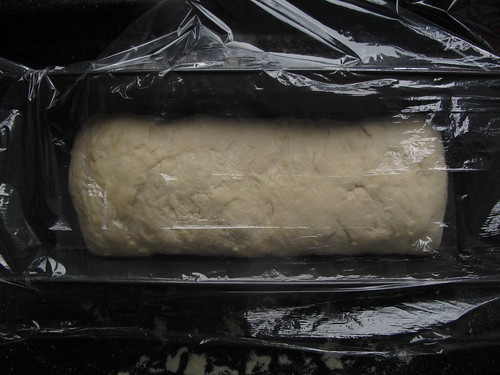 Set the dough in a warm place, like the oven (not turned on) and allow to rise till the dough fills the pan and is risen a touch above the pan. Remove from the oven 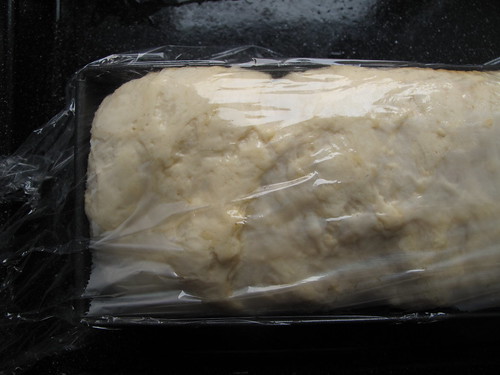 Pre-heat your oven to 200 degrees c, about 375 degrees F. Place a rack in the middle of the oven and an empty roasting tray at the bottom (for holding water which will help create a great crust). Put the kettle on to boil, not for a cup of tea mind you!

Using a brush, gently paint on some egg wash…. 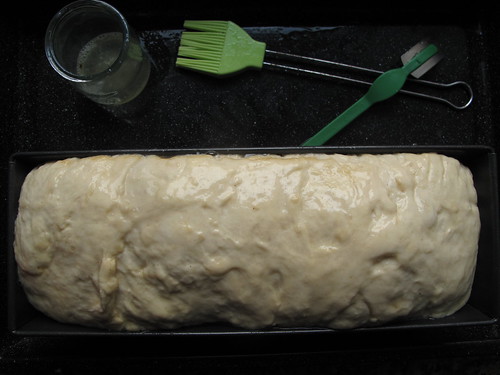 …. and then slash the desired pattern of your dreams with a grignette or a small sharp knife. Sprinkle with a touch of plain flour (for an artisan look aka die-hard-must-create-a-sexy-loaf!). 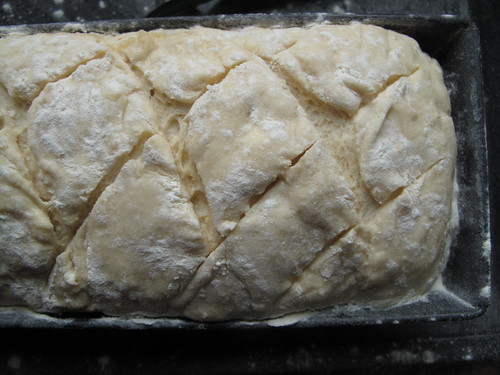 Get your cup of hot water ready and then put the bread pan in the oven, followed swiftly by pouring the cup of hot water into the tray beneath. Quickly shut the door of the oven and bake the bread for about 35 – 40 minutes, turning around halfway through baking. 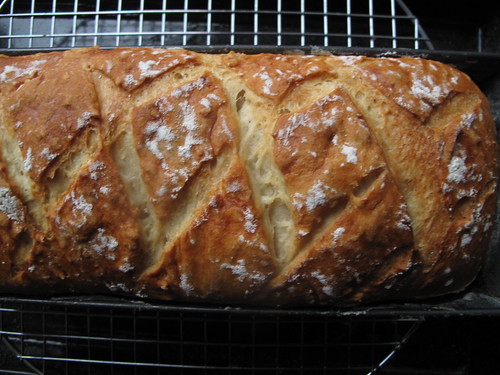 Once the top is a golden caramel colour, remove from oven and let cool for at least ten minutes on a rack. Remove from pan and check the underside – if it is wet, return to the oven placing it wet side up (top side down) and let bake for another 5 – 10 minutes.

This challenge was successful on the first 3 counts. The bread had the look, came with a great crust and was spongy to the touch. I was proud…… 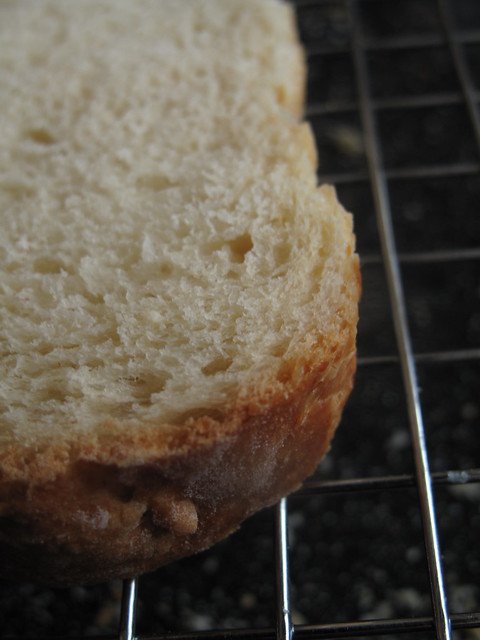 The mie was soft, holey and a touch of sweet cream colour. 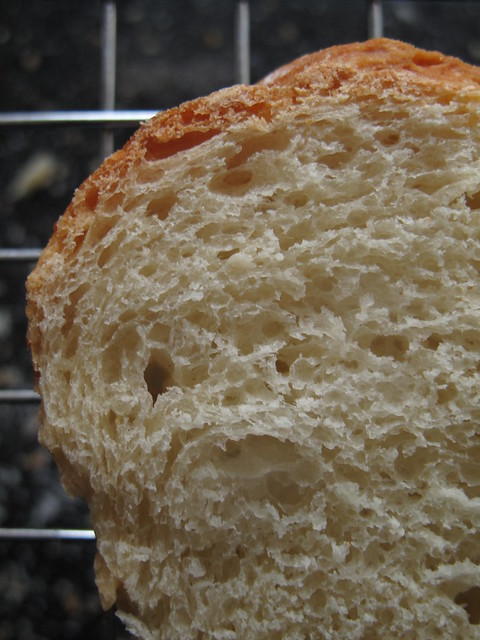 But taste wise, a bit of a let-down, I skimped on the salt and so it didn’t have a lot of flavor. Some crushed sea salt over butter over bread tried to solve the matter alas, with that forlorn look, I cast my head down in shame. 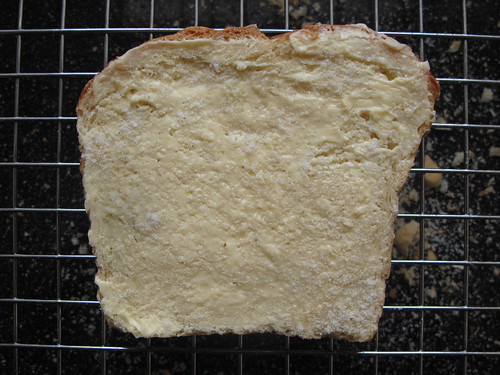 And then daughter #1 bounced in excitedly, saying ‘I can’t wait to wake up tomorrow morning for the bread’. I attempted to let her down every so gently about the salt less taste and you know what she said – ‘Oh great, then I can have some olive oil and salt with it’. Oh Lord, may I always have hope, be quick to find solutions and be surrounded by people who skip, hop and dance on the bright side of life. Can I get and Amen? (Saying a silent prayer – Help me Lord!)

And now I’m off to try my hand at making some more bread from dinner tomorrow night. We shall see how it goes, all I know is there’ll be no skimping on the salt…or sugar for that matter!

Tomorrow, Wednesday Joan will present a round-up of what other bloggers cooked up. Please stop by Foodalogue tomorrow.