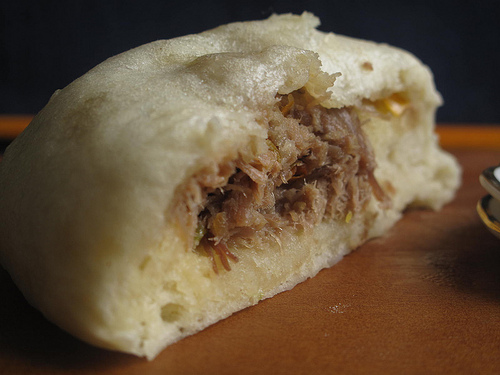 Nikuman. Perfect food for cold wintry days and chilly memories of charming Prague where sub-zero temperatures resulted in lots of  coffee and hot chocolate. I am glad to be home. 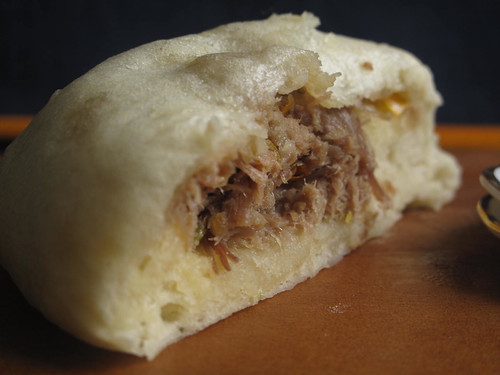 Nikuman (肉まん; derived from 肉饅頭 niku (meat) manjū) is a savoury Japanese food made from flour dough, and filled with cooked ground pork or other ingredients. It is a kind of chūka man (中華まん lit. Chinese-style steamed bun) similar to the Chinese baozi (包子), also known in English as pork buns.

Nikuman are steamed and often sold as street food. From about August or September, through the winter months until roughly the beginning of April, Chūka man are available at convenience stores, where they are kept hot.

Thank you Dave – Mr Chang of Momofuku and I are now on serious first name basis. I think. Well, I assume…you know, we spent a week acquainting ourselves with one another. And thank you too La Fuji Mama. See, reading of ‘Pork buns’ in Momofuku (the book) didn’t sound that appealing but then I hadn’t tasted  pork belly or pulled pork. Once I did both, it occurred to me that pork buns would be great. But I did absolutely nothing about that, only think and wish.

And then La Fuji Mama came to the rescue. I don’t know what I was doing that afternoon (but it definitely wasn’t lazing about, whiling away precious time browsing the Internet highway) when I happened upon her Nikuman recipe and bookmarked it in my head – the dough was an easy, no-yeast mixture, very appealing. And because the pull was so strong, the next day I went back to visit her only to see she’d made another version, this time with peanut butter and jelly, and a different (yeasted) dough. I smiled. (I did end  up trying both versions and preferred the pork ones by far, as did the husband). 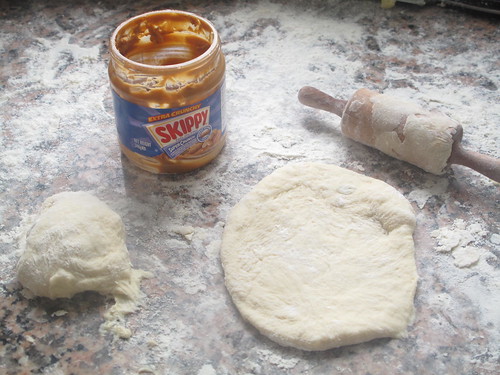 Before I went to bed that Saturday night, thoughts of nikuman in my head, I made up the dough in a bowl, without kneading a single thing because I’m not a heroine who thrives on whitened arms and muscles stretched from massaging dough to shape. I get no thrill from watching the transformation from shaggy mass to smooth and stretchy. No, I’m lazy. Call me that, if you like. I left the dough to prove on the counter for a couple of hours and then oiled the top, covered it with a lid and slid it into the fridge. I would sleep happy that night. When I arose on Sunday morning, I had a monster in my fridge – escaping dough threatened to overrun me. Note to self – use a larger bowl next time.  The husband looked at me for something to eat, and in my usual convincing manner, I said I can make you pork buns…it’ll only take 15 minutes and a bit to cook them. He smiled and said, sure. 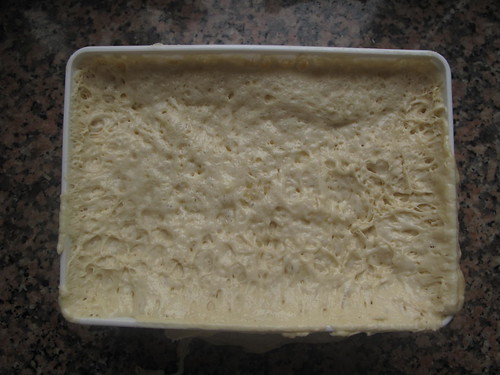 It wasn’t long before my dough was in a smooth ‘boule’  round, and I was sniping and sizing and balling up dough. The filling was made in a snap and I proceeded to make an honest pork bun, if ever there was such a thing. Hmmm. Well, bacon is honest. As is pork belly, so these would be buns of character and societal standing. Note to self – don’t revere pork. Love it but don’t lust after it. 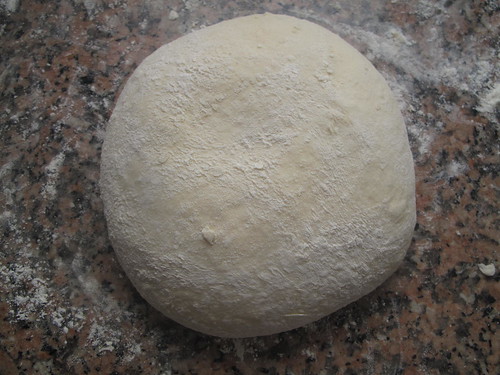 The balls were made, and while they rested, I set up my non-bamboo steamer. Note to self – buy a bamboo steamer from the oriental shop next time you go to get Yuzu. Ramen. Or sesame seeds. Steamer steaming away, the first set of buns went in and a quarter of an hour later, emerged – puffed up (thank you yeast), pillowy (thank you dough) and flat (no thanks to me), enriched with a fragrant centre of pulled pork. 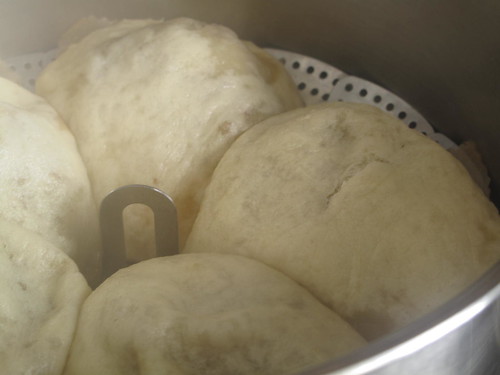 I served my adorable husband some with a jar of damson-chile jam, carefully pushing his strawberry jam jar out of the way (the man is into some weird combinations). His sounds of delight were enough to plaster a smile on my face. Perfect handyman’s breakfast I noted. But then, I desired to remedy the appearance of these poor, tasty buns and plunked them in silicone muffin cups, greaseproof paper and all. 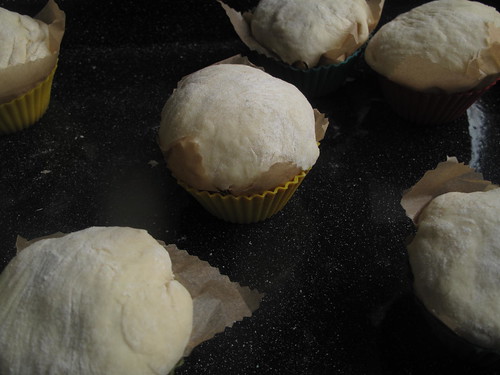 They rose like muffins and looked like giant bakery cupcakes. And almost white as snow. And guess what? They tasted just as delicious as their flat brethren. And I secretly gave La Fuji Mama a big virtual hug which she didn’t receive…..not being aware it was coming her way. 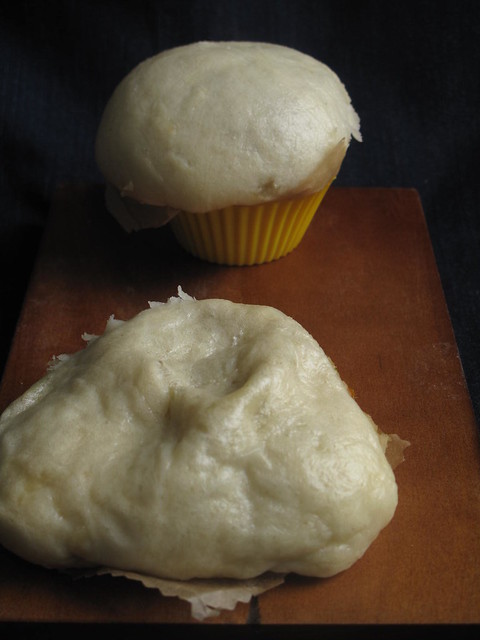 Anyhow, Ls and Gs, today I present nikuman – my version of this popular Japanese bun, perfect for a builder’s lunch box. Big, full and sufficient to give supreme doses of energy boost under the day’s hot sun but by no means heavy and doughy. Totally amazing and highly recommended. 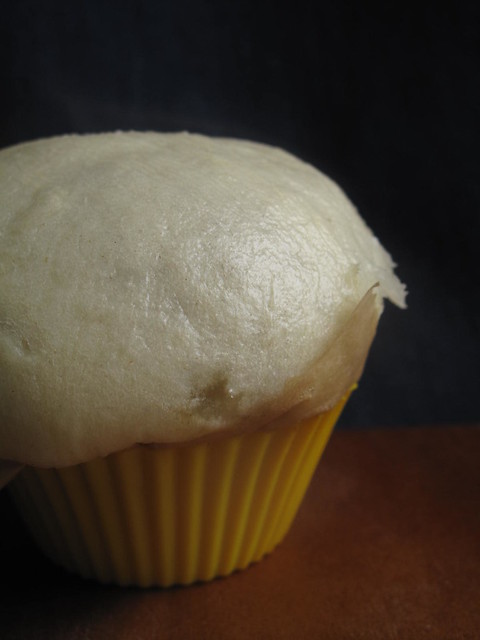 Saying that, in future I will aspire for small and dainty buns that could grace tables at English, Chinese, Japanese and possibly French high tea. The sort that make you want to sit cross-legged on a pretty stool, and lift the lid on a bamboo steamer, with perfectly-manicured (fake) French nails, a nice fringe and a red flowery dress with gold leaves in your hair. The kind that requires two fingers to lift and not a palm to hold. Perfect bites that make a bun disappear in three bites as opposed to filling your stomach for lunch.  Buns that require you to eat 10 before you’re full, as opposed to one. 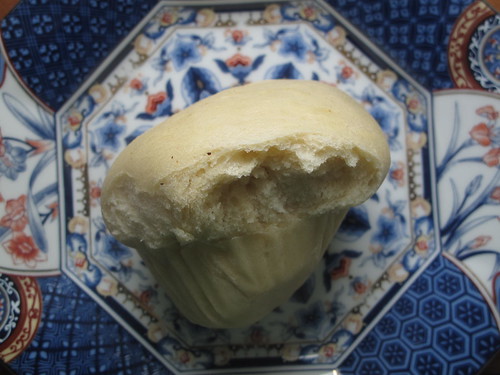 But till then, I remain true to the name. Nikuman.  Or Meat man as I call them as ‘Niku’ means ‘meat‘, and ‘man’ is actually short  for ‘manju’, meaning buns. So my translation is ‘fake’ but it sounds good!

To do it by hand, follow the instructions below. In a large bowl (which has a lid), put the warm water, and crush the fresh yeast or active dry yeast. Combine. If using fresh yeast, you need not set aside anytime to ‘prove’, if using active dry, set it aside for a few minutes till bubbly. Then add the whisked egg, butter chunks and sugar. Sprinkle the salt over the top and add the flour, cup by cup till incorporated. Set aside, loosely covered on the counter for a couple of hours till risen. Use immediately or set in the fridge overnight to ‘improve’. If following the overnight method, use a pastry brush to lightly oil the top of the dough and the top of the lid before refrigerating.

Put the pork, onion, bamboo shoots (if using, I didn’t have any), and ginger into a large bowl. Add the chili garlic sauce, soy sauce, sugar, and sesame oil. Mix the ingredients together with two forks until well incorporated and the meat becomes sticky and forms a mass. 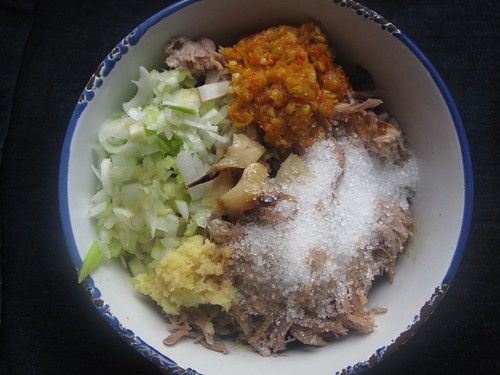 Remove the dough from the fridge and gently knead on a lightly floured surface to form a smooth ball. 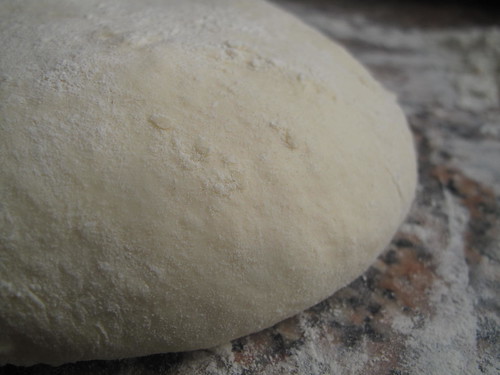 Divide the dough into the number of balls you’d like to make by cutting the round first into halves, then quarters and further till you have the number of pieces required. 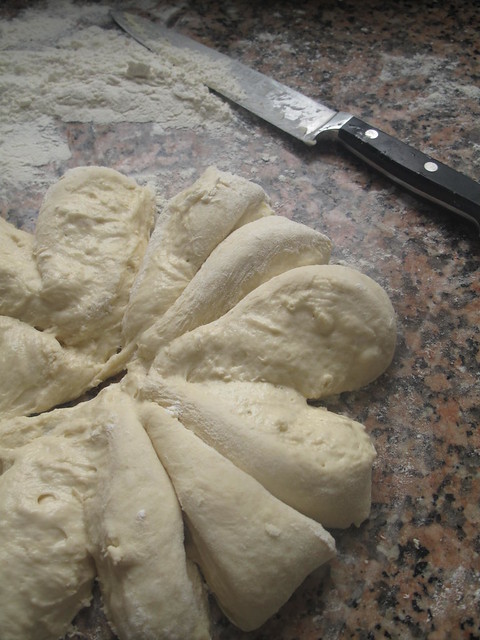 Roll each piece of dough into a ball and set them aside, loosely covered. 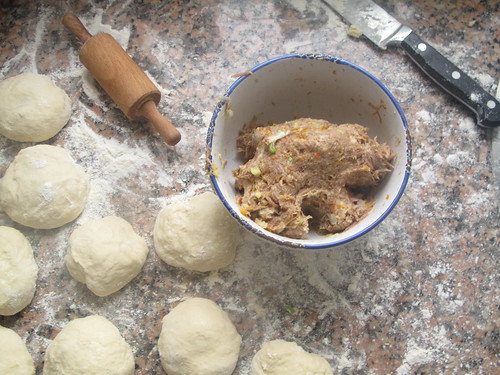 If you want to be super organised and ensure you have enough filling for all, portion out the meat mixture, using a teaspoon or tablespoon. Then take a ball of dough and flatten it between your hands. Using a rolling pin, roll the dough out into a circle that is about 5 to 5 1/2 inches in diameter. Using your fingers, pinch the edges of the dough to make them thinner. Place one ball in the center of the dough and wrap it by bringing the dough up around the meat to the top, forming little pleats with the excess dough, then slightly twisting the dough to close it and pinching it firmly to join it. 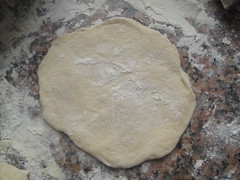 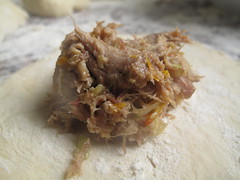 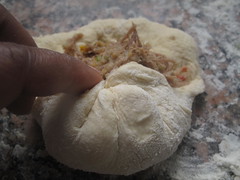 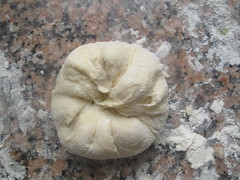 Put the bun on a small square of parchment or wax paper. Repeat the process with the rest of the dough and meat till you use them up. 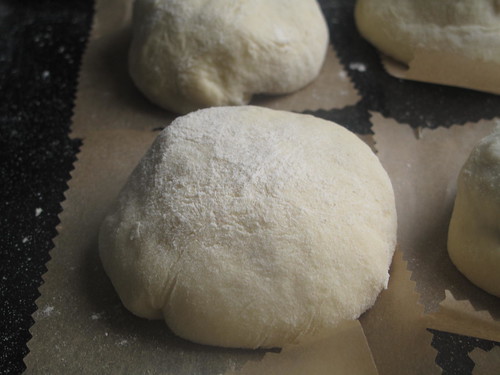 Put the water in the steamer base, along with 1 tablespoon of rice vinegar (optional). Note, while my steamer worked well, its slanting sides meant some of my buns kissed each other. I have since remedied that ‘note-to-self’ by purchasing my very own bamboo steamer. For the couple of euros it cost me :-)! 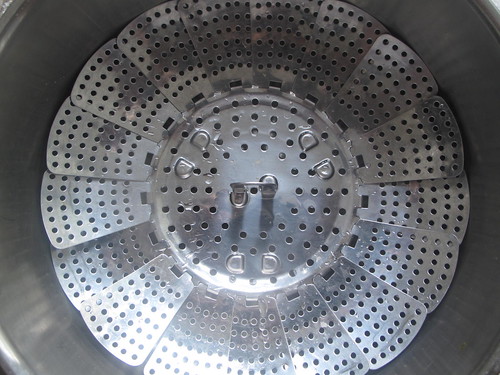 Apparently, the vinegar will create whiter-looking buns. Preheat the steamer on high heat until it starts steaming. Place the buns on their squares of parchment/wax paper in the steamer and cover then steam for 15 minutes on high heat. 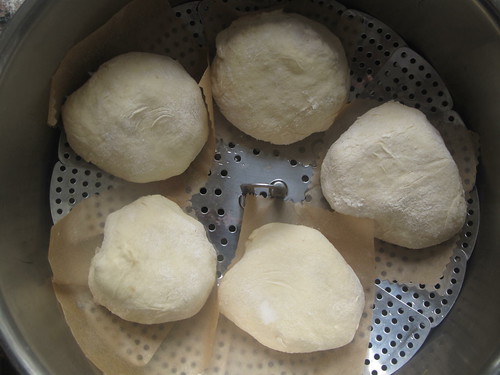 Remove from the heat and cool for a few minutes before serving. Accompany with some plum jam or dipping sauce. 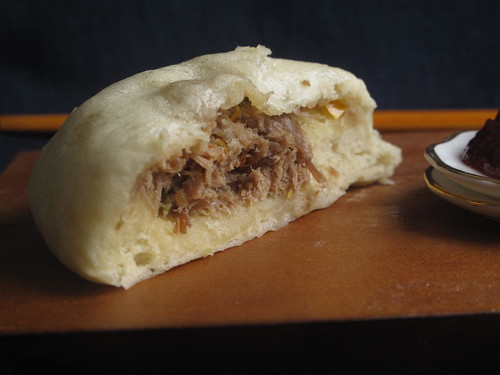 The buns keep extremely well in the fridge for a few days and freeze well too. Pack them in zip lock bags. To reheat, microwave or steam again for a couple of minutes.

The dough – can be made with minimal kneading, ‘cause punching down dough doesn’t give me a kick . I also think the dough would make a fantastic white loaf, considering the way it rises and the end result of soft and springy. I was shocked that the dough cooked perfectly – like bread. But now that I think of it, that’s what bread does in the oven – it kind of steams. The only difference is one ends up with a golden crust and the other….. a smooth, satiny soft top.

The filling – can be whatever you make of it, use fresh, use shredded, used cooked pork…..I used leftover pulled pork which took on a softness when combined and stuffed into the heart of the buns.

The flavours – the smell once you open up the buns is the first thing that hits you. Spring onions, garlic, ginger, pork, chilli all waft up to you, in thick tunnels/paths/clouds of steam, cooked as though in a clay oven with the lid on. Nothing escapes – all the flavours and goodness are trapped in.

These have come to stay. A fixture in my repertoire.  Make this and you’ll thank Dave, La Fuji Mama, and I.  Or if you like, I can pass on your thanks………..Expect more Japanese delights…….from this butterfly in future.

Some other great nikuman recipes

Love the sesame seeds on top of Ben the Baker’s nikuman.

How nikuman should look in a proper bamboo steamer

Shaz of Test with a Skewer’s nice Bunny rabbits

I missed Joan’s Egypt stop last week on the Culinary tour but next week I’m gearing up to share one of my favourite Nigerian recipes with you on the last halte of the 2011 Cuinary tour – Peppersoup. Don’t let the name scare you off. See you soon and enjoy your weekend. Love.[wpurp-searchable-recipe]Nikuman: Japanese Pork Buns – – – [/wpurp-searchable-recipe]