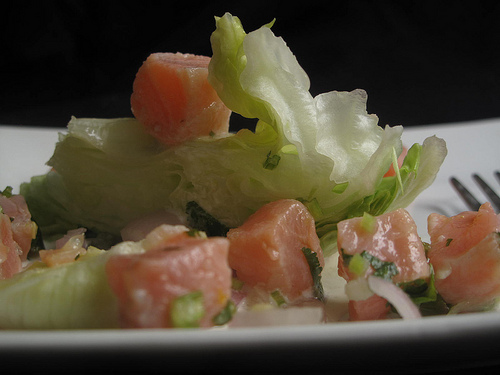 This month’s Daring Cooks challenge is brought to you by a very weary Traveller Jane. Weary in body but not in mind, soul or belly. So weary and a touch under the weather, that this daring cook stayed in on Saturday, fresh off a flight from the US of A, huddled on the couch watching Masterchef  Australia while the shops stayed open and all the fresh white fish sold itself. 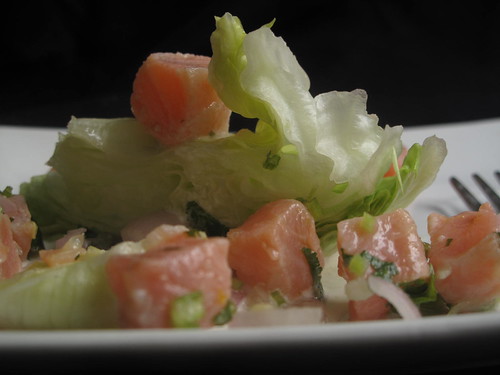 And so when it came round to this challenge, said Traveller J employed the services of a nicely wrapped fillet of pink Atlantic salmon, previously cured but with sufficient life for a round of ceviche. 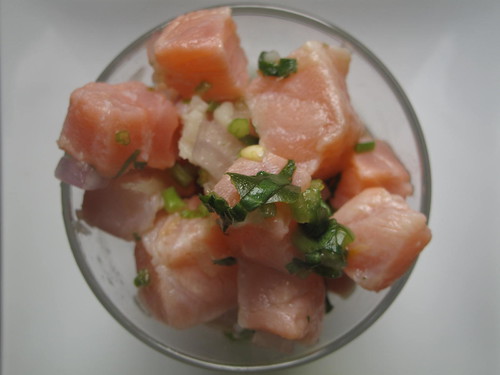 Mandatory Items: Make at least one of the two recipes. If you chose the ceviche, it must be made with raw seafood and it must be “cooked” according to the method outlined in the recipe. If you choose the papas rellenas, you must make the “dough” according to one of the two recipes, shape the “potatoes” around a filling per the recipe instructions, and fry them in oil. If you choose both, you’re in for a tasty treat.

IF you are a real live Peruano/a, or have spent years in Perú, or are somehow otherwise well-versed in Peruvian cuisine, and you have a real authentic recipe that can be used instead of the ones I’ve provide, that’s fine – just make sure that you are making Peruvian ceviche and/or papas rellenas AND share the recipe!

Bonus points! Prepare the “Pisco Sour” at the end to reward yourself for all your efforts. This really is the national cocktail of Perú (just go ahead and try telling a peruano that it’s from someplace else. Go ahead…I dare you!) and it’s quite tasty. I know BevMo sells pisco, so there is at least one source outside of Peru for it and I believe there are more. Warning – this stuff is a bit of a headache in a glass if you overindulge, but as a nice late-afternoon cocktail, it sure is tasty!

Variations allowed: For the ceviche, “cooking” times and flavorings can be adjusted to taste. The papas rellenas can be made with or without eggs and filled according to individual preference. The filling really doesn’t matter – feel free to be creative. It’s the technique of making the “potato” that’s filled and then fried that I think really makes a papa rellena. Feel free to sauce them however you like as well (although I highly recommend at least trying the criolla sauce). 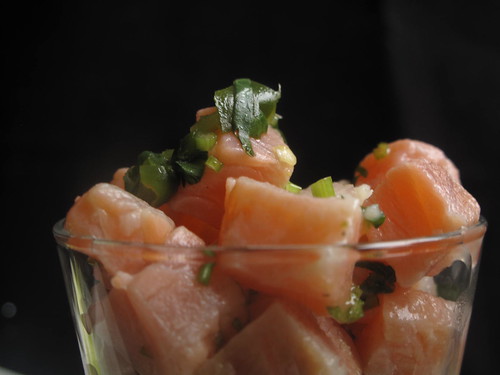 I chose to tackle one part of the challenge as specified but then served it with something newly discovered on my maiden voyage to the States, specifically eaten in the state of Texas, in a nice resort in the greenery of the Woodlands just outside Houston. Ladies and Gentlemen, it is ‘The Wedge’. 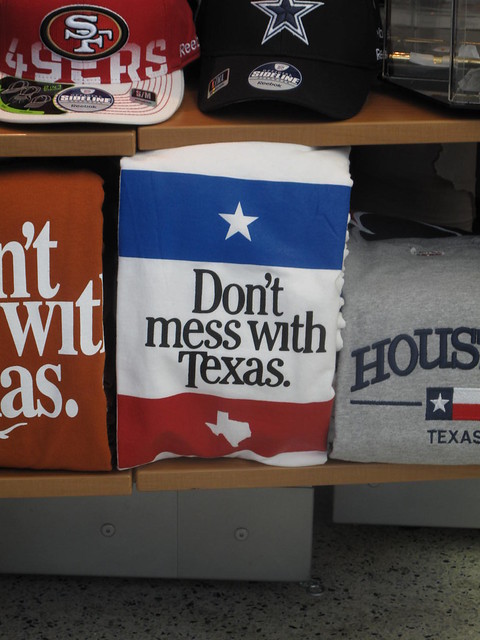 By the way, I did enjoy other delights, namely steaks, Texas toast, applewood smoked bacon, blintzes and loads of hash browns. What I wasn’t so keen on was iced tea for lunch, primarily because it wasn’t the tastiest but that’s a petit faux. 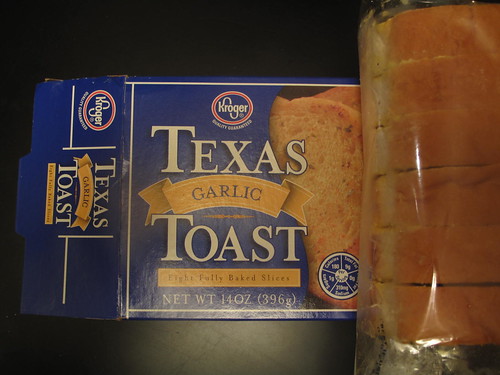 In solid geometry, a wedge is a polyhedron defined by two triangles and three trapezoid faces. A wedge has five faces, nine edges, and six vertices.

In Foodie terms, a wedge salad is an elegant, fancy-Nancy salad (which I LOVE) consisting of a wedge of iceberg, served intact, as one piece, not chopped or with leaves separated (as is done in a tossed salad). It is often accompanied by slices of tomatoes, red onions, crumbled blue cheese amongst others and drizzled with some ranch dressing. Other toppings include bacon bits, chopped boiled egg, herbs etc.

Traditionally, you remove the root end from a whole iceberg lettuce, and then cut the head into 4 wedges. To make mini portions, you can simply carve out the required size of wedge by cutting into a head of lettuce and gently extracting a wedge, similar to what you’d do with a watermelon, though not carving from top to bottom. 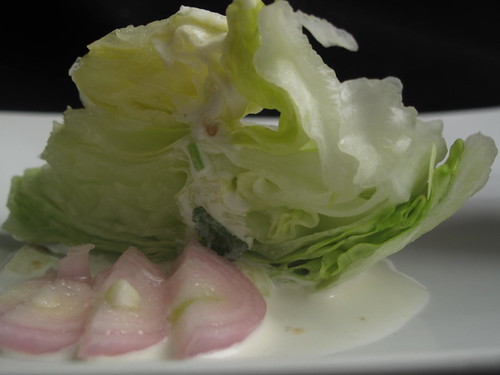 I served my wedge on a small platter with a verre (French for glass) of ceviched salmon, and some salsa crillo. This ‘starter portion’ made for a light and refreshing dinner and looked gorgeous. To eat, I spooned bits of salmon from the glass onto the wedge of lettuce and tucked in. Whoever dismissed lettuce as empty calories missed the point completely. I think there is little in life to rival the refreshingly cool qualities of iceberg lettuce. Except maybe Bajan fruit punch. And a glass of ice cold water on a sunny day in the Caribbean.

The crisp lettuce was the perfect counterfoil to rich, slightly chewy salmon cubes with its touch of acidity from the lime. The coriander leaves lent a slight herbal flavor but was not as strong as I would have liked. All my own fault though. And I did enjoy my made-up version of yogurt and homemade buttermilk ranch dressing – the creaminess worked well with the ‘meaty’ salmon and the cool, crunch of the iceberg.

To make homemade buttermilk, add either 1 and 3/4 tablespoons of cream of tartar /1 tablespoon white vinegar/1 tablespoon lemon/lime juice to 1 cup of whole milk. Stir and allow to stand at room temperature for up to 15 minutes. The milk should begin to curdle. Stir well before using.

A combination of plain yogurt (3/4 cup) and whole milk (1/4) cup can also be used to replace a cup of buttermilk in most recipes.

Thank you for this challenge, Kathlyn! Did I mention that I have now returned, happier for my trip and very inspired, more of which I’ll share in the days to come. And my shopping went brilliantly. No clothes but lots of great foodie buys. Thank you all for your tips – it shaped my list!

I got pecans, though not ‘made in Texas’ as I’d already been to Wholefoods and got some by the time I checked my blog to see your  comments Kristin W – thank you though. Next time (and there will be another trip), I’ll make sure I go to H.E.B, and not just drive past. I did spot the gorgeous blue blooms, dotting the hills close to the airport. Thank you for opening my eyes to the gorgeousness of Texas hills! 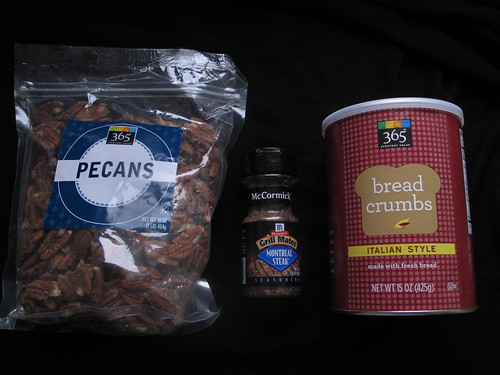 A big thanks to Sarah of All Our Fingers in the Pie. She said: ‘How exciting. My suggestion would be to go to a grocery store and you will find things at a much better price. Kosher salt is great – no additives. Buy a big box. Buy some cans of Hatch chiles. They are the best. Pick up some blue cornmeal, grits, Tony Cachere cajun seasoning, Montreal steak spice, ancho chile powder, all sorts of dried chiles, Zatarain shrimp & crab boil seasoning mix, chipotle peppers in adobo sauce (can), sorghum, pecans, and there is a great black truffle sauce you can buy in Houston, perhaps at the airport even.’ 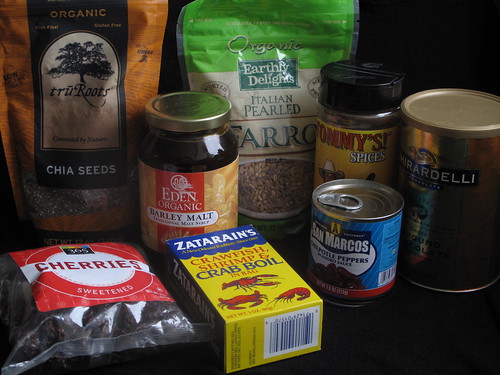 I could get a lot of stuff…..and I’ll be looking forward to great recipes on how to use them so please send me your faves please. I didn’t find sorghum, or Hatch chiles or Tony’s seasoning but I did get a container of Tommy’s coffee rub! I was pleased overall. Thank you lots Sarah! 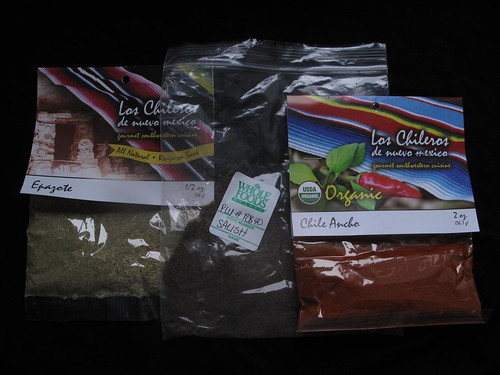 And there was even more – tapioca pearls which you can find in the Netherlands but I had a gift card to spend……..so I did! I was glad with the buttermilk powder though….and I made sure to look at the expiry dates before I rushed to make a purchase. 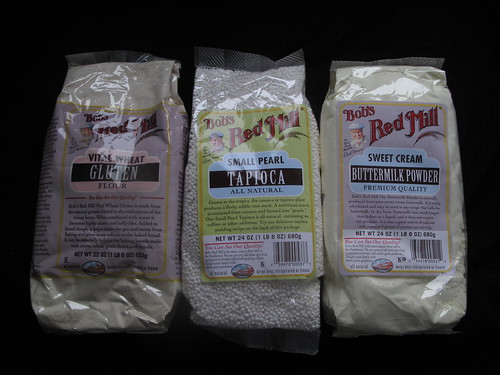 The high heels were purchased, as were Jolly Ranchers. And my S’mores kit is complete. I had a great time but must admit it was a bit tiring. Next time, I’ll focus on clothes!

On to Ceviche, the reason we have assembled. Ceviche’s birthplace is disputed between Peru and Ecuador, and as both countries have an amazing variety of fish and shellfish, it could easily have come from the ancient Inca civilizations of Peru and Ecuador. Every Latin American country has given seviche/ceviche its own touch of individuality by adding its own particular garnishes. In Peru, it is served with slices of cold sweet potatoes or corn-on-the-cob. In Ecuador, it is accompanied by popcorn, nuts, or corn nuts. It is also served in a large crystal bowl with the guests helping themselves, either by spearing it with toothpicks or filling the pastry shells. In Mexico, seviche is accompanied by slices of raw onions and served on toasted tortillas.

It is considered Peru’s national dish…..There is a theory that pre-Hispanic peoples cooked fish with a fruit called “tumbo.” The Inca’s ate salted fish and a chicha-marinated fish dish. The Spanish contributed the Mediterranean custom of using lemons and onions. There are other historians that believe that Ceviche’s origin is Arabian, imported to Peru by Arabian immigrants and re-interpreted by the Peruvians of the coastal areas. The other version is that some English-speaking people, who watched fishermen on the coast of Peru eating their fish directly from the sea with just lemons and salt, said “See the beach.” Since this is a phrase that the locals could not repeat well, they instead pronounced it “Ceviche.”

Ceviche, which is often spelled seviche or cebiche, depending on which part of South America it comes from, is seafood prepared in a centuries old method of cooking by contact with the acidic juice of citrus juice instead of heat. It can be eaten as a first course or main dish, depending on what is served with it. The preparation and consumption of ceviche is practically a religion in parts of Mexico, Central, and South America, and it seems as though there are as many varieties of ceviche as people who eat it.

2 lbs. (about 1 kg) firm white fish (scallops or other seafood may be substituted)*
2 garlic cloves, mashed
1 chili pepper, minced (I recommend Aji if you can find it, but Jalapeno or other peppers can sub)
1 cup (240 ml) freshly squeezed lime juice (between 8-12 limes); Fresh juice only, no bottled. Can use lemons in lieu of limes.
1 tablespoon (15 ml) (4 grams) (1/8 oz) fresh coriander (cilantro), finely chopped
1 red onion, thinly sliced lengthwise
Salt and pepper (to taste)

Wash and trim your fish. Slice into pieces between ½ inch (15 mm) cubes to 2 inch (50mm) pieces, depending on taste.Place fish in a non-reactive, shallow pan in a thin layer. Season with salt and pepper. 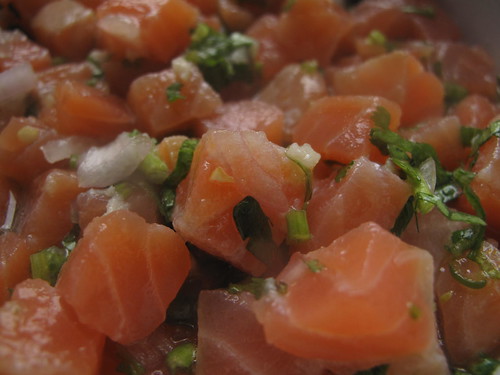 Combine lime juice, chili pepper, coriander and garlic. Pour mixture over fish and stir lightly to expose all the fish to some of the lime juice mixture. 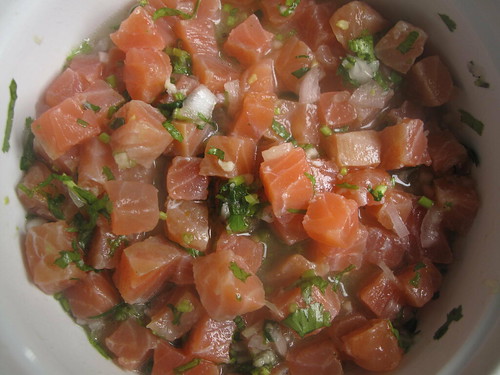 Put sliced onion on top of fish as it “cooks”. Let fish stand for 10 minutes then lift it out of the lime juice. 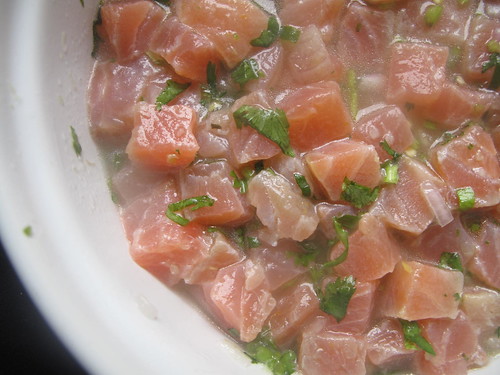 Plate individual portions, garnishing with lettuce, slices of sweet potato and slices or kernels of corn if using. 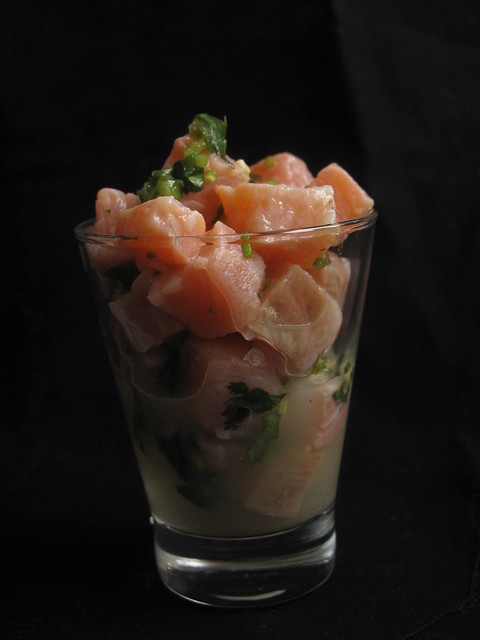 Similar to my lime-pickled onions

2 medium red onions, cut in half and very thinly sliced (as half-circles)
1/2 chili pepper (your preference)
1 tablespoon vinegar
Juice from 1 lime
Salt and pepper to taste

Soak the onions in cold salt water for about 10 minutes to remove bitterness. Drain. In a medium bowl, combine the onions with the rest of the ingredients, season with salt and pepper. Cover with plastic wrap and refrigerate for at least 30 minutes for the onions to macerate and the flavors to combine 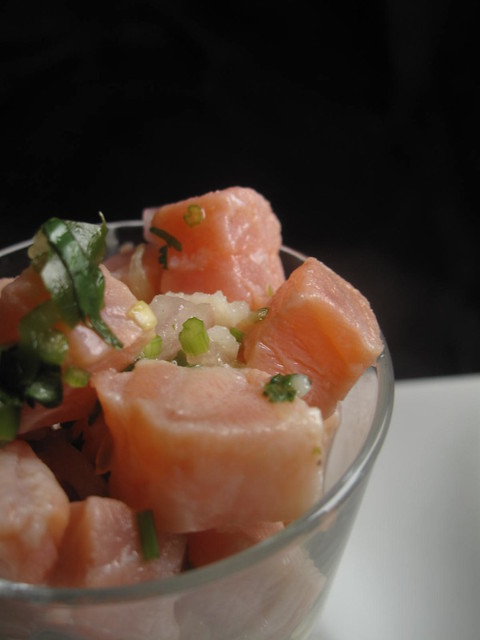