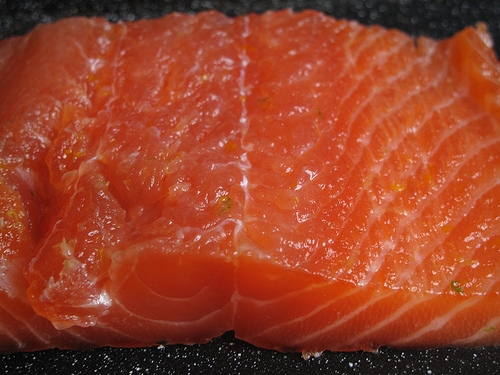 ….because I long to be/am a ‘finisher’. And I think if you don’t know how to make ‘it’, school’s a good place to learn! 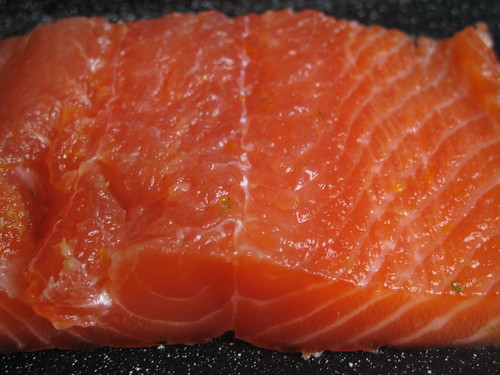 Remember Berlin? Yes, you do? Thank you very much. So do I.

For all the things Berlin was – fun, great, interesting, Germany, it kept me from a gastro stop in Alaska.  Well to be honest, Berlin was well-timed because when I came to dreaming up what to make for the Arctic country, I came across salmon, and salmon and salmon. I wasn’t thrilled with the ceviche recipes or the broiled, baked and braised ones either. 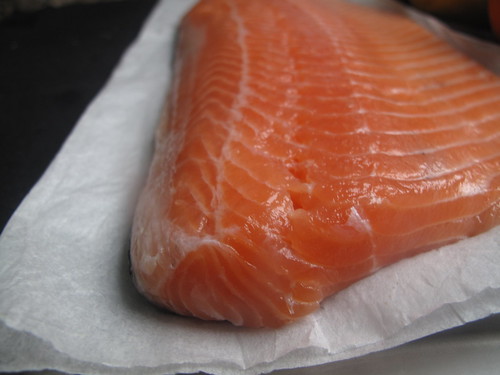 And this is testament to the fact that some things are best left alone. My husband always says ‘If you don’t feel that peace, don’t do it’. I believe that too but sometimes it is so hard to want something yet find the very same thing trouble you. Does that ever happen to you? So imagine that you find the perfect job, after years of searching. You love it, are passionate about what you’ll do when you move into that role and so on and so forth and then a few days before you plan to apply, you realise that hey, the terms of the contract you’ll get will do more harm than good. So what do you do then? 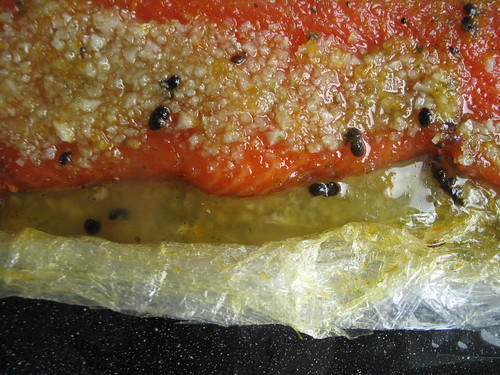 Imagine all the hope, the excitement, the energy you’ve put in….and now you want to think ‘oh, what a waste’. In the end, you feel the utmost calm and rest in you heart when you say to yourself, ‘This is not the right job for me’. You say this with confidence, hopeful that something better will come along. You spend weeks crestfallen with drooped shoulders, and you wonder and wander. I say ‘Be of good courage and do not be overwhelmed’. And then I think of Nick Bollettieri, the founder of the tennis school that has produced some of the world’s greatest tennis stars. He says

“Every endeavor pursued with passion produces a successful outcome regardless of the result”. It is not about winning or losing, rather the effort put forth in producing the outcome“.

And that brings a deep level of comfort because it is true – no knowledge is ever lost and every experience is for a purpose.

In that spirit, I decide to re-shape my future, and in it I see citrus-cured salmon. And no longer is it plain ole salmon, it has transcended the realms of ‘Alaska is all fish’. In that instant my mind delves deep into the past and dredges up from the murky waters of food shows, the UK Masterchef finals where citrus-cured salmon was on the menu. Suddenly I am smiling, envisaging a delightful afternoon practising my ‘filleting’ technique. But first I got  one small skinless steak, cured it, ate it , loved it and then scheduled a date to go the whole hog. That was on Saturday. When I returned from my weekend morning shopping spree, I laid the salmon aside and collected myself, steadying the nerves for filleting. I have filleted fish before but this was different – it was a huge side of salmon, about 50cm long.

But with a sharp knife it went pretty well. 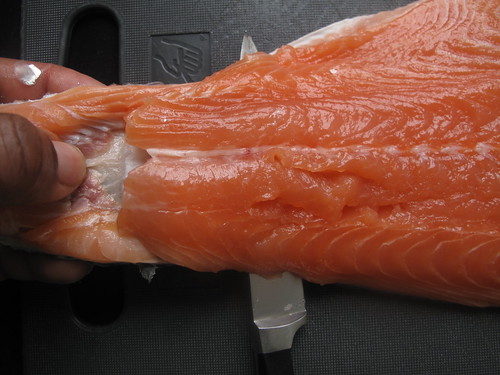 I gripped the tail end, set the knife with the sharp side angled down and pushed the knife forward almost while pulling the skin down and back – if it makes sense. In no time, the skin was off and then I gently shaved off the bloodline (the brown bits on the underside). 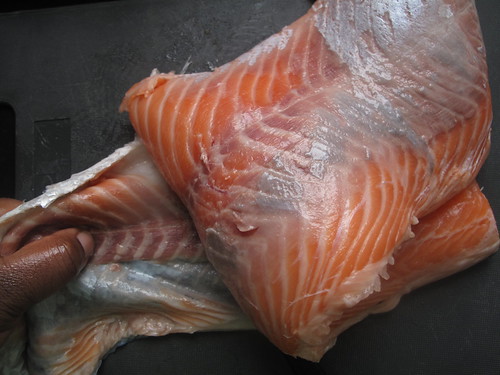 And then it was ready to be cured. 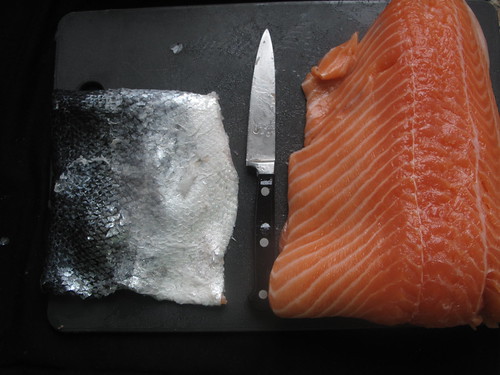 What does curing do?

Curing pulls moisture (water) from the fish, and simultaneously encourages the fat cells to absorb the spices applied. Weighting the fish (wrapped in plastic and in a container) speeds this transfer and the removal of water. Read more at Suite101: Home-cured Salmon: Lox, Gravlax, Nova, Gaspe or Balik – It’s Easy and Delicious 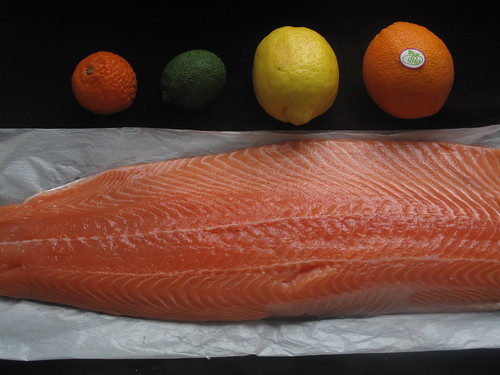 Top Tip: be cautious with the salt, better under than over salted!

On a baking tray which can fit into your fridge, lay out a piece of clingfilm/plastic wrap, longer than the length of the fish. Then triple the plastic wrap to increase its strength, folding it back on itself to create a strong base.

Combine the zests and peppercorns together with sugar and sea salt. 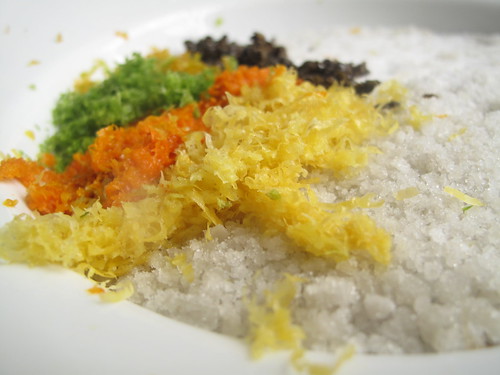 I tend to mix all the ingredients with my hand, to ensure they are well combined but also to release some of the flavours I am sure would be latent were I not to exert some power. 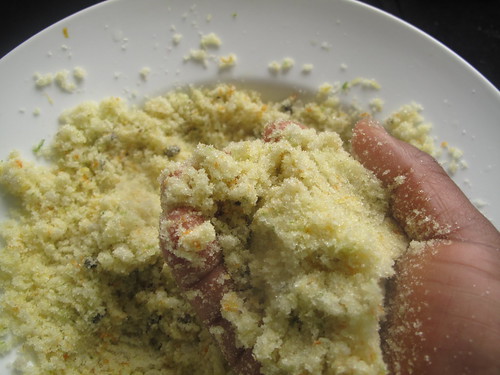 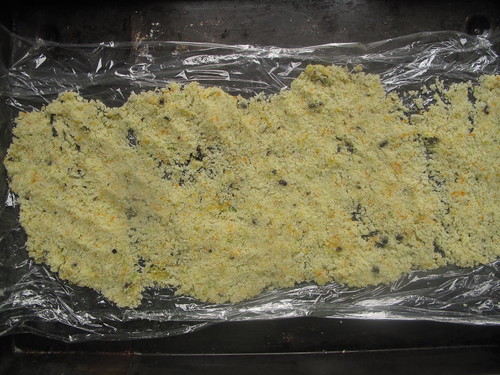 ….then place salmon fillet …to sleep. 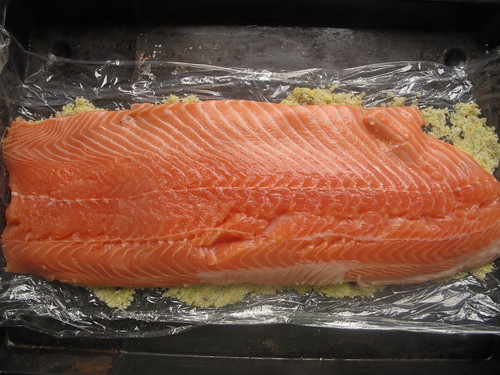 Top with the rest of the sugar-salt-spice mixture, rubbing it so the entire surface is covered. 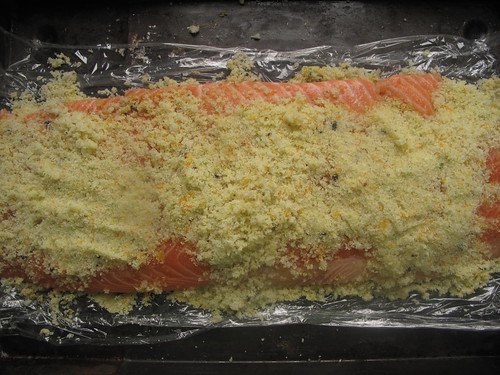 Then cover with plastic wrap till a nice package is formed. 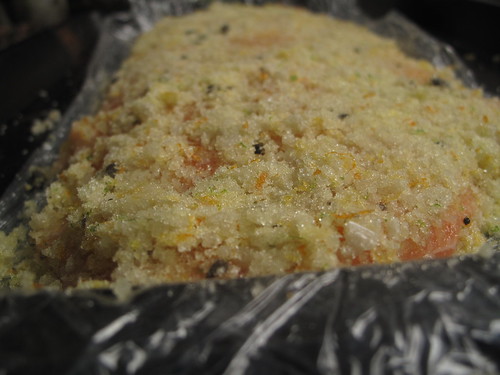 Refrigerate for up to three days. Now because of my previous experience where my salmon was ready after an overnight rest, I left it for just a day but make your own choice. 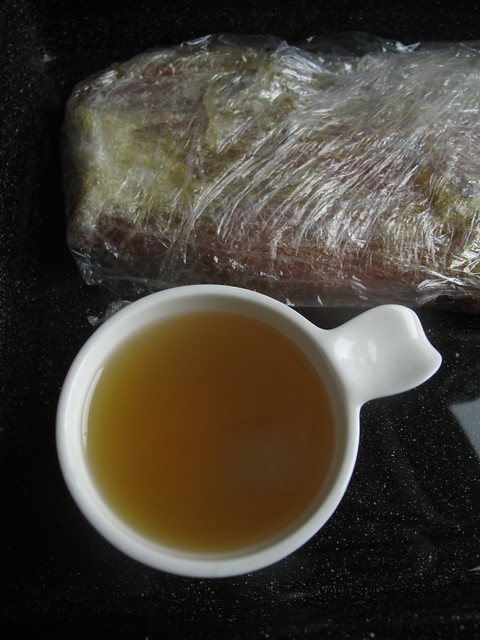 When ready, remove the salmon from the fridge. You’ll notice it is swimming in a pool of thick, syrup – I was amazed at just how much had come out considering I hadn’t weighted the salmon, it was up to a cup. 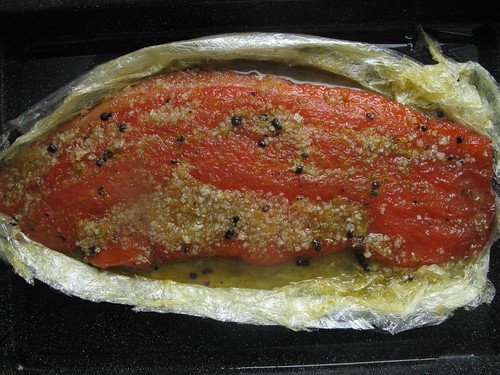 Wash the fillet under cold water to remove the cure then pat dry.

Because I had a large piece, I cut it into 4 pieces and individually wrapped them in clingfilm and then returned them to the deep freezer.

When ready to serve, remove salmon from the deep freezer and let defrost in the fridge. Slice to your hearts content and top with some citrus zest, potato slices, bread, sour cream, herbs and the list goes on and on….

Wrightfood says ‘Slice the salmon into thin slices. I like to lay the knife almost parallel to the cutting board, and just literally shave thin slices diagonally across the salmon fillet.’

This cured salmon was lovely, perfect for a crisp, dry white.

First of all, the colour was awesome. Overnight it had transformed from a rosy-orange colour to a deep, translucent coppery red, I-can’t-describe-the-awesomeness-of-the-colour. Then the flesh was firm yet soft , like butter…though you won’t catch me sinking my teeth into an inch thick slab of butter, be it cold and even salted.

It had whispers of citrus, not overpowering and not underwhelming either. I enjoyed it with some sour cream, topped with lemon zest, chopped coriander and some coarsely crushed black pepper.

I plan to make some ‘Lox’ – smoked, cured salmon, in the near future. 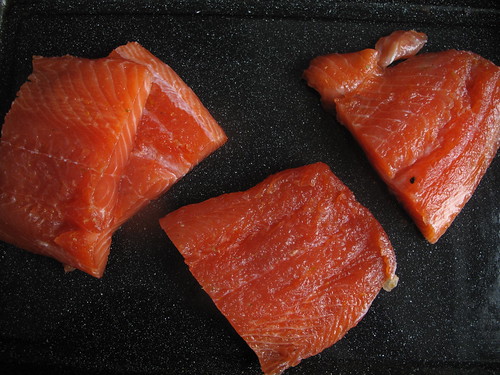 Daughter #1 sauntered in from a sleepover and demanded some. I sliced a pinch off and then she asked is it raw? My roundabout answers were not convincing and in the end I ‘seared’ a small steak for her. She enjoyed it thoroughly with half a lemon and a smile on her face.

What is the best/most sustainable salmon to use?

Alaskan salmon is considered the best choice in terms of sustainability. Which one did I use? North Sea (Atlantic) salmon. Why? Because I didn’t realise it was ‘almost-endangered’ but I know now for next time. According to Seafood Watch, Wild Alaskan salmon is the best choice because freshwater habitats in Alaska have remained relatively pristine, and salmon originating in Alaska does not face the same damming, deforestation and development challenges as those in California and the Pacific Northwest.

Can I use already frozen salmon?

Yes, You can cure already frozen salmon, though ensure it is thawed before use. Some people actually prefer frozen salmon because ‘Parasites, such as roundworms, can naturally reside in salmon regardless of if it was frozen or fresh. For safety, use salmon that has been commercially frozen or freeze the salmon yourself to at least -10°F (-23°C) for at least 7 days.

Does it make a difference if I wrap the salmon in aluminum foil or in clingfilm?

I think it does. The first piece of salmon I cured, I used foil and the colour was nowhere as deep as when I wrapped it in clingfilm. There is some scientific explanation I know, oxygen activating carotenoids and ….but I haven’t figured it out yet and it may be a while in coming :-). Anyhow, I prefer the clingfilm wrap as I’m nervous about foil and citrus!

Do I have to weight down the wrapped salmon to speed up the curing process?

The first piece of salmon in foil was weighted, as I had sufficient room in my fridge to accommodate it. IT cured fine. For this side of salmon, there was no room to place weights and still keep the tray in the fridge so I left it as was….I was shocked at the amount of liquids extracted which stands to reason – it is the action of the salt and sugar that de-water the salmon, and not the weights.

Can I freeze the cured salmon?

Yes, you can freeze cured salmon. It keeps fine in the fridge for about a week, and in the freezer for about 3 months. Before freezing, cut your sides into sizes you want to use later so you’re not freezing and thawing a large piece over and over. Wrap smaller pieces individually and seal all in larger Ziploc, sucking out the air.

Is home-cured salmon safe to eat?

Yes, it is safe to eat as long as you take care in your preparation. 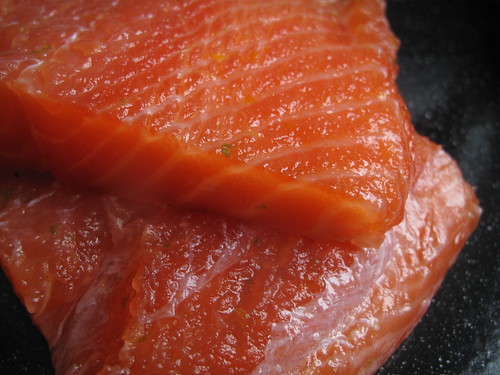 So there you have it – cured salmon, in the manner of Alaska. Next week we’re back on track and all I can say is Sriracha for the next stop of the 2011 Culinary Tour hosted by Joan of Foodalogue. Enjoy your week.