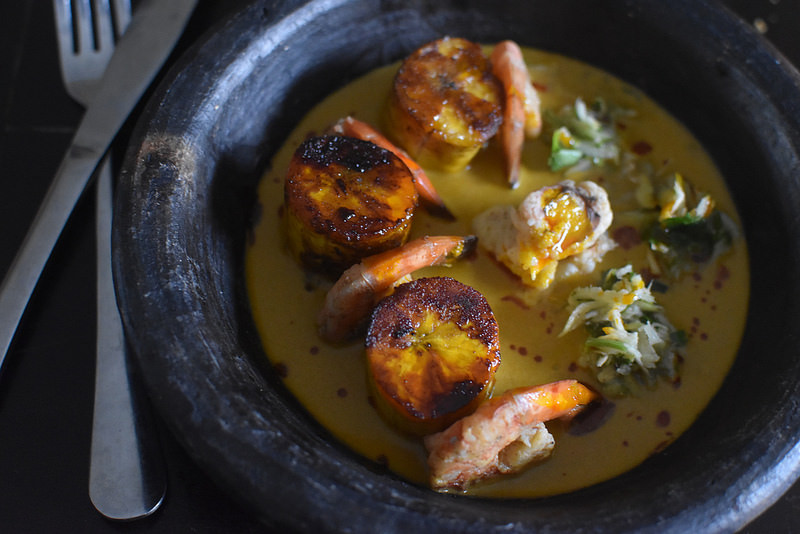 This concept is about my love for Brazil and the beautiful combination of palm oil and coconut milk which at first glance sounds weird but then, when cooked is so delightful in a moqueca.

Moqueca (IPA: [moˈkɛkɐ] or IPA: [muˈkɛkɐ] depending on the dialect, also spelled muqueca) is a Brazilian recipe based on salt water fish stew, tomatoes, onions, garlic and coriander. It is slowly cooked in a terra cotta casserole, optionally served with prawns, and includes by preference a mix of boneless fish species, like small shark, swordfish, etc.

Originally from Espírito Santo in the Southeast of Brazil, also coming from the state of Bahia in the Northeast; nowadays, this dish is found in two variants: moqueca bahiana from Bahia and moqueca capixaba from Espírito Santo; Source: Wikipedia

The oil and coconut palms are important crops in both Nigeria and Brazil. Used in different ways, they show forth the good of the land.

1. Sea almond relish: The flesh of sea almonds, much like green almonds can be incorporated into a relish. I grated my sea almond flesh, combined it with cilantro, lime zest, lime juice, salt, sugar and a bit of chili to bring some ‘freshness’ and lightness to the dish 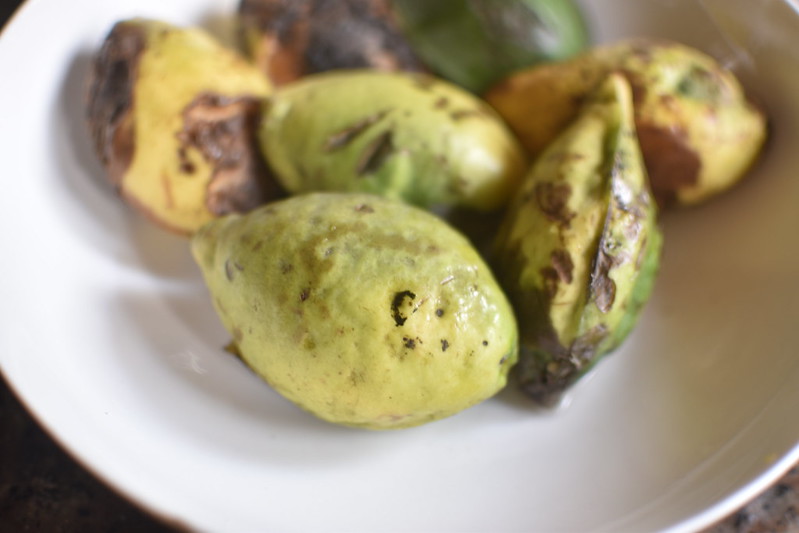 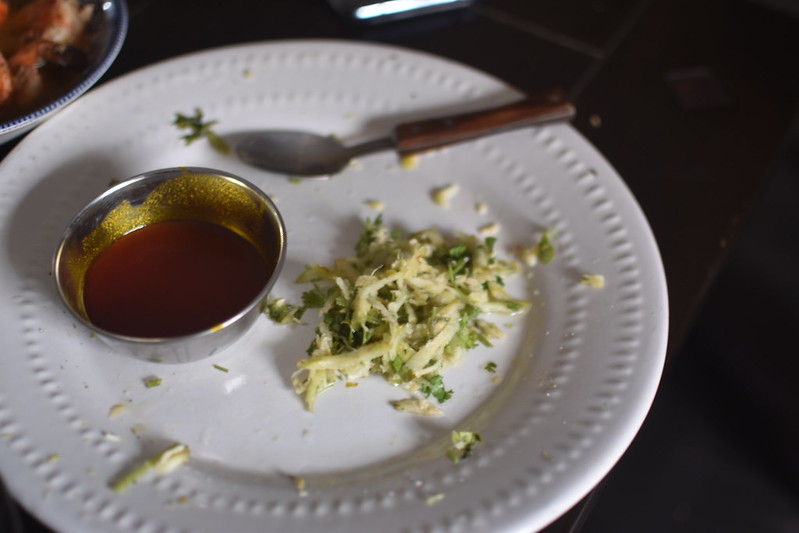 2. Seafood broth: This broth served multiple purposes – to cook the fondant plantains, to poach the seafood and to make the ‘soup’ of palm oil and coconut.

Here, I made a prawn head pepper soup broth. Then I combined the strained liquid with coconut milk and palm oil, gently stirring and simmering. I left it a bit too long, and so it split, but then I strained it again and voila, an orange bisque. 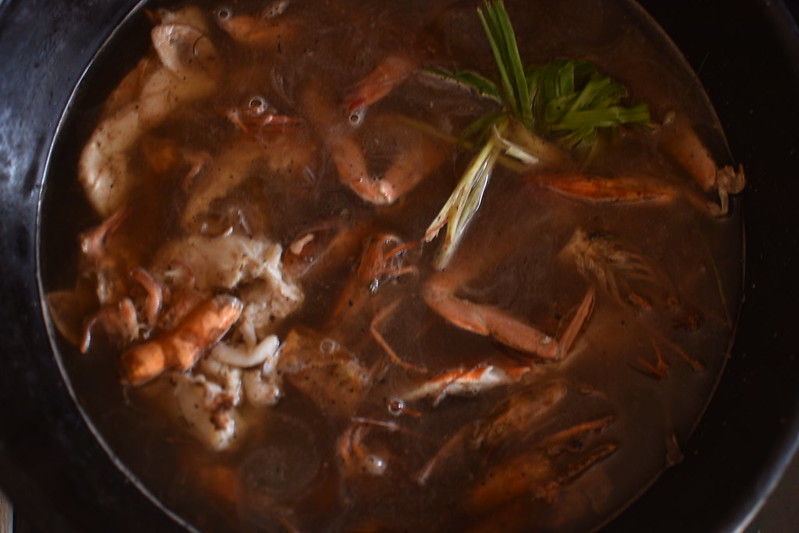 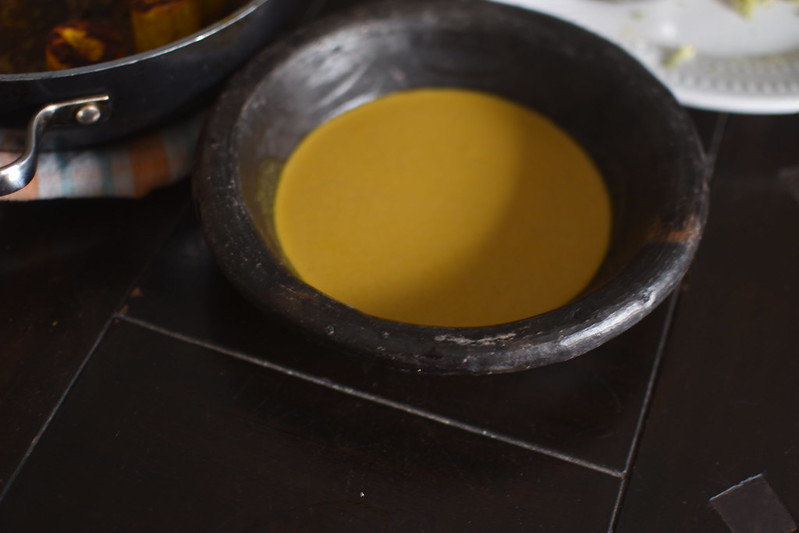 3. Fondant Plantains: It seemed a good idea at the time, to ‘fondant’ – the french technique of searing till golden, flattened ends of potato discs or cylinders then cooking them in butter/ butter and liquid (water, stock etc) till all the water is evaporated, and only the butter remains with the potatoes cooked through. It kind of reminds me of the process of cooking dumplings.

However, however, it didn’t quite work out. I guess our dearest spuds have slightly different properties from the plantains.

I seared them in palm oil on both sides and then cooked by adding the pepper soup broth till cooked through. 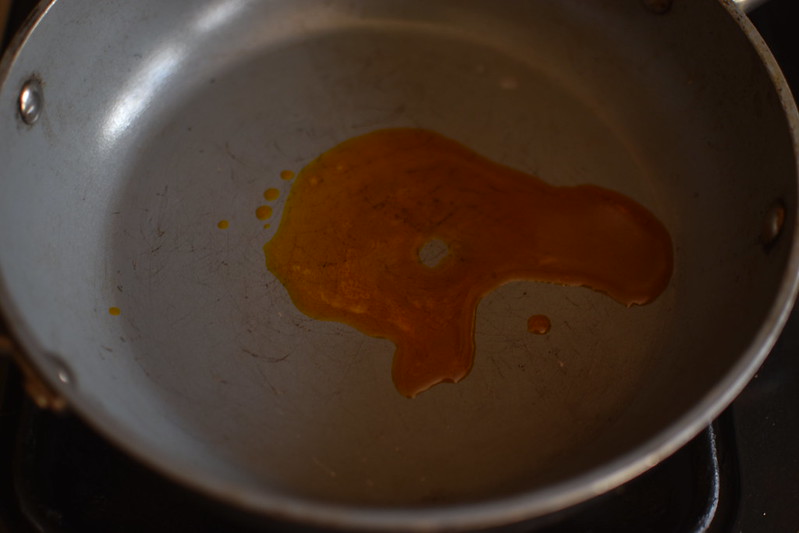 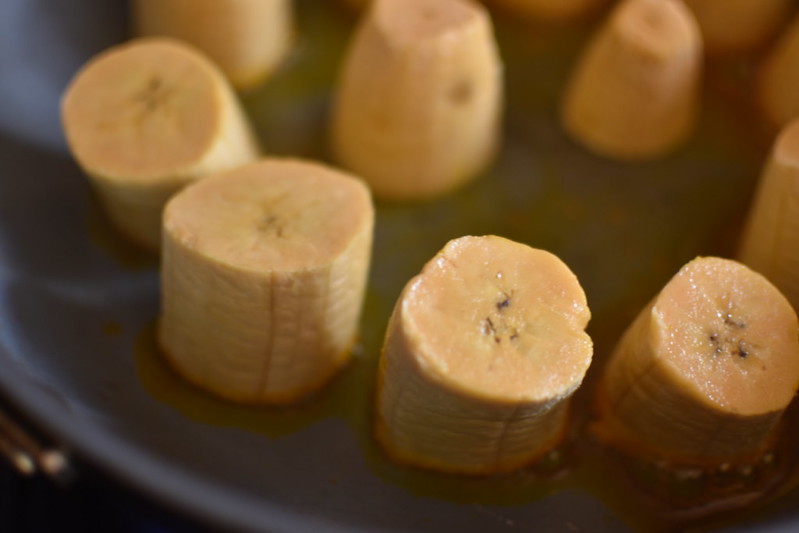 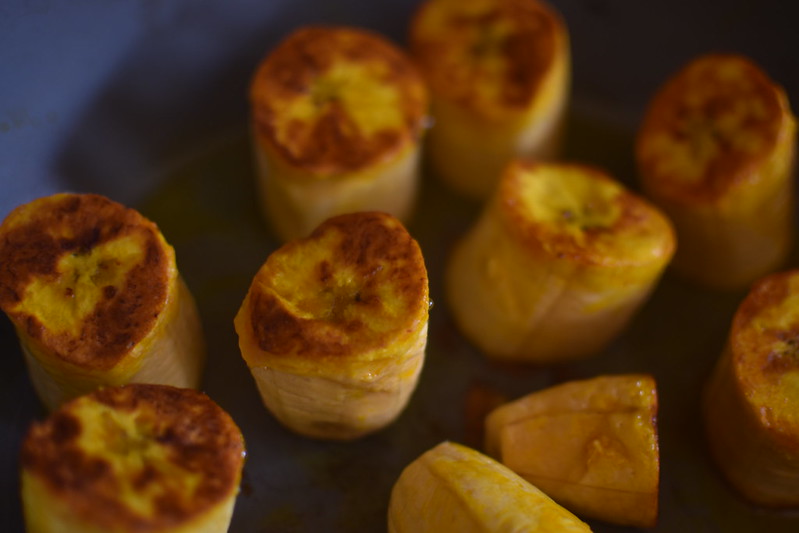 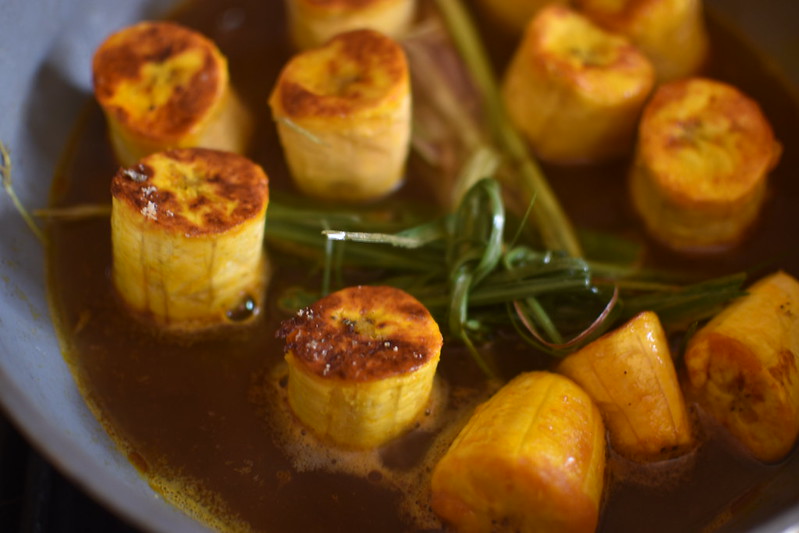 4. Seafood: I gently poached prawns – heads removed, shelled but tails left on. I also attempted to remove the crab meat from the claws. My desire was for whole sections, alas, I ended up only able rescue small portions.

I began with a clay pot into which went the seafood bisque. 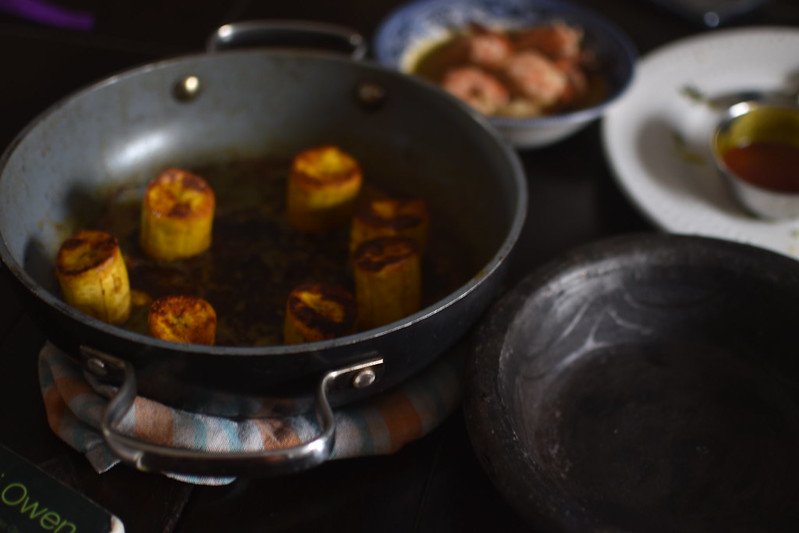 Into the broth went the fondant plantains 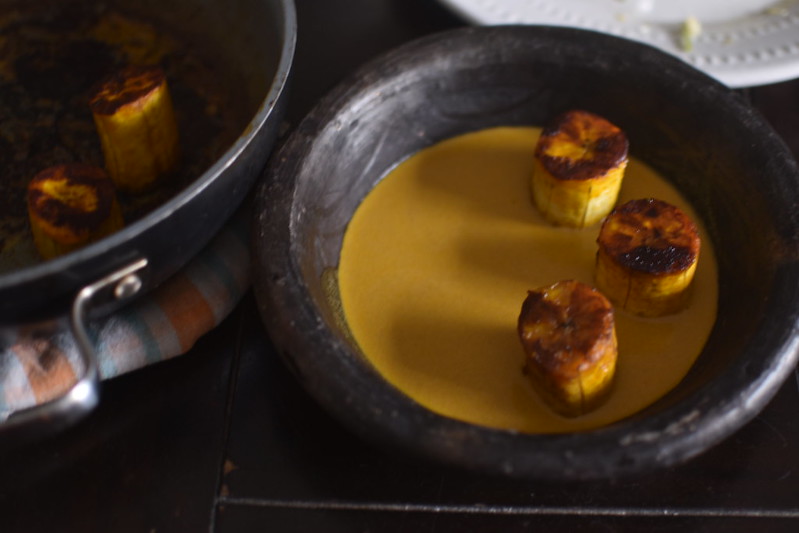 And then the poached prawns and crab meat 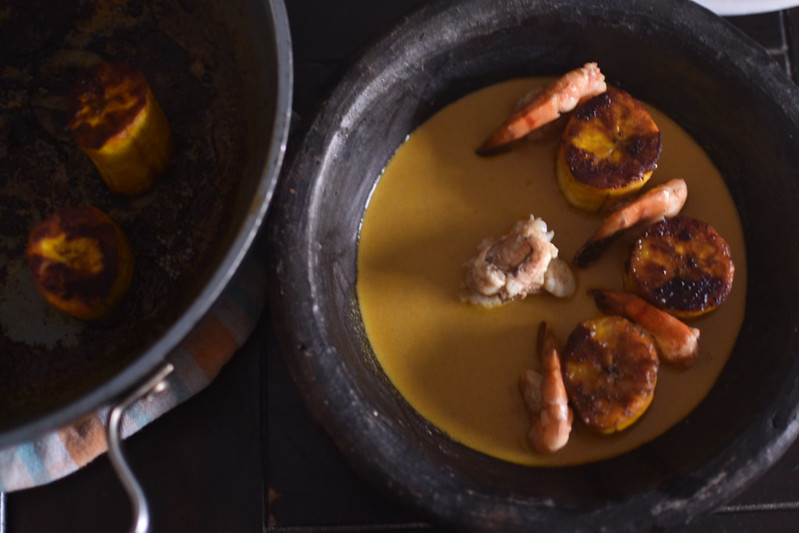 Followed by small scoops of the sea almond relish and drops of palm oil, because palm oil with yams and plantain is the ‘ish. 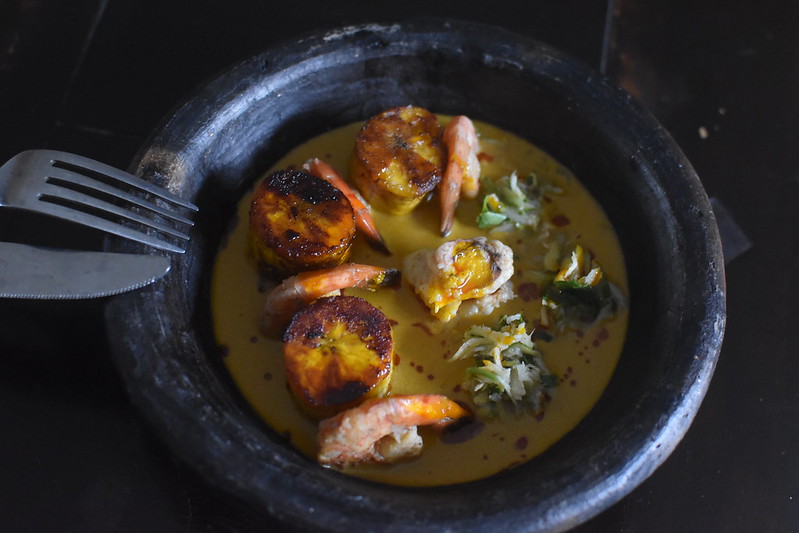 I enjoyed it. The soup/ bisque base was flavourful with a creamy, seafood essence that worked well with the peppersoup.

The relish brought interesting and perhaps necessary relief from the creaminess of the broth but also the mealiness of the plantains. I don’t think I will repeat the plantain fondants the way I did but… 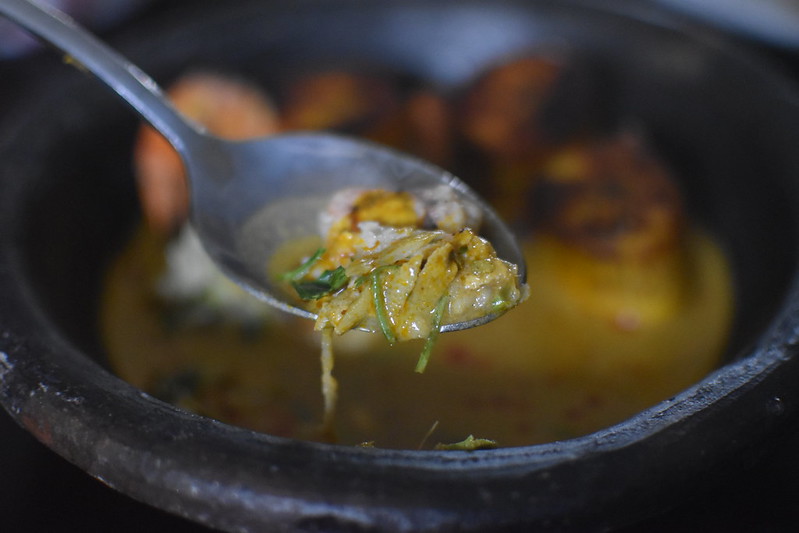 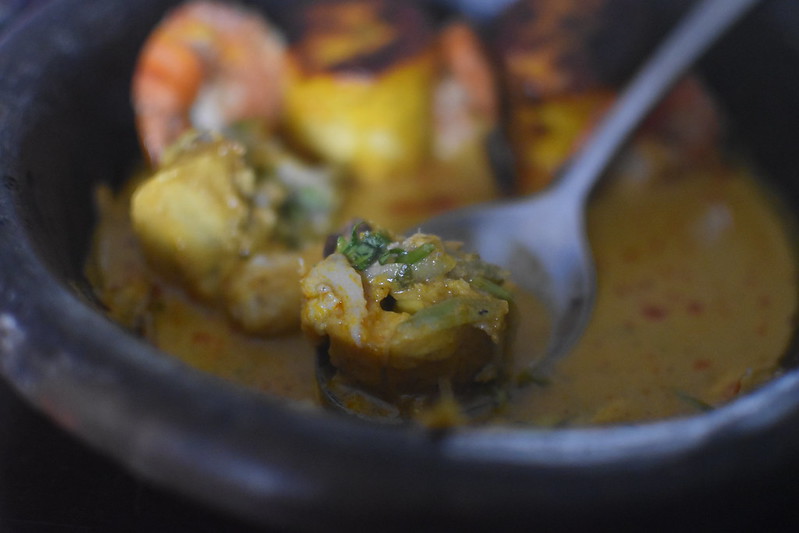 In the end, I enjoyed exploring the palm oil – coconut mix. I’ve since tried this combination in rice and fonio and it works brilliantly. 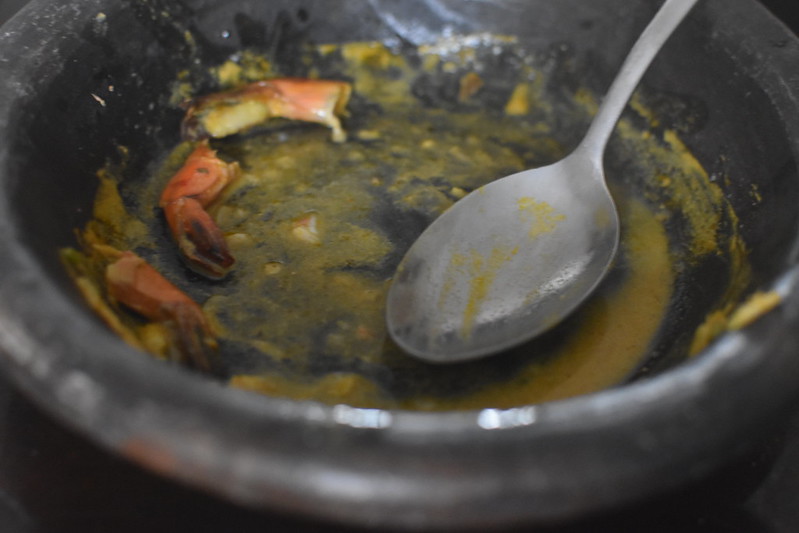 The end. Have you had moqueca before? Made it?