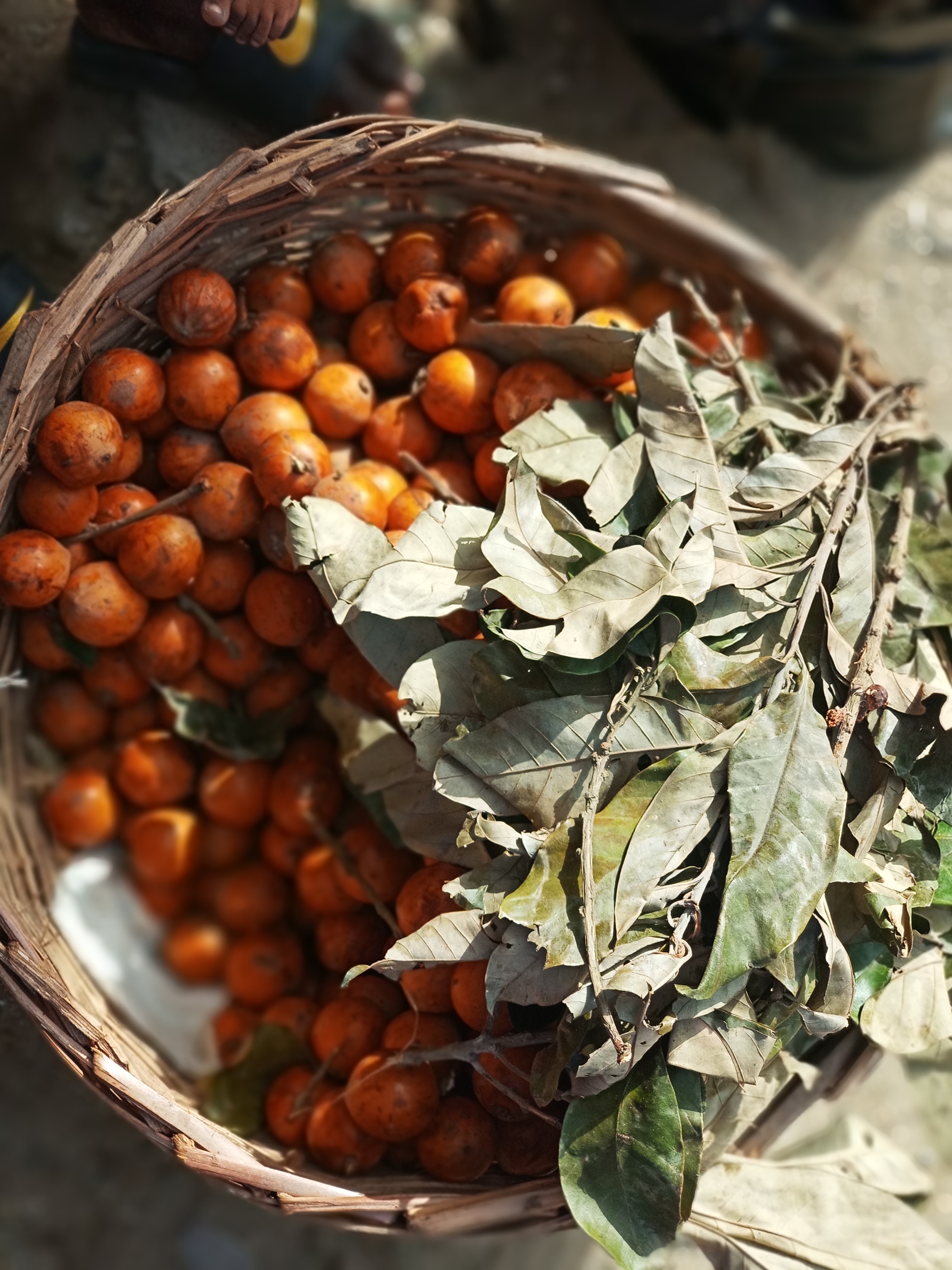 I grew up in an Igbo household in Lagos. And while steeped in Igbo culture, I have always been around and influenced by Yoruba culture. I currently have (and have always had) more Yoruba than Igbo friends >> there were only 5 Igbo students in my graduating class of ’94 from Adesoye College (“ACO”) and of the bunch I was the only girl. I guess although fully Igbo (100.01%), I am a mutt or as Taiye Selasi implied – in this age of globalization, identity is not only rooted in “where you are from” (what she really said was that there isn’t anything like “where you are from” because none of us are only from any one place).

I am Igbo to the core, but I am also a Lagosian (not to the core though, I’m still trying to learn that dancing with the shoulder move), all the same I am definitely more than trying for an “OmoIgbo”. If you asked me, I would tell you that in the context of my Nigerian influences, I am “Igboruba”. What does all of this have to do with agbalumo you ask? I am just setting the stage. In my mother’s home, food is identified by its English, Nigerian or Igbo name. So for instance: when we pour garri into hot water, the product is referred to as garri, which always makes my Yoruba friends laugh. They wonder how this is distinguished from the other process, i.e. when we pour cold water into a big mug of garri. I have never understood their perplexion, as that is simply referred to as ‘drinking garri’. Another example: when we want to offer someone fried plantain, we say, “Do you want fried plantain?” and not “Do you want dodo?” I have nothing against these words: eba or dodo, I am only highlighting the fact that I only know foods by their Igbo, ‘Nigerian’ or English names.

Not so for African Cherry. Agbalumo is the only thing that I consistently call and associate with its Yoruba name and I refer to it as that, even to my mom. I say, “Mommy, please can they buy agbalumo?” and when it has been bought, she says “Nne, the udala is here”. All this despite the fact that the fruit has an Igbo name (meaning that of course I call ewedu ewedu, gbegiri gbegiri and dundun dundun (but in the case of dundun, only at “owambes”) >> my mom doesn’t know a thing about ewedu or gbegiri or dundun (at home it’s fried yam)). What is more remarkable, is that I clearly remember an Igbo song from a folktale about the fruit (which refers to it as udala), in fact, sometimes while eating the fruit, I sing the song in my head (I know, I am weird), the song goes:

“My udala grow nda grow grow grow nda my father’s wife (i.e. not my mother – African folktale, you get?)

nda bought udala in the market

nda licked the udala {have no idea how this phrase was completed} nda”.

I have no idea what nda means, I assume it is like that word in the Psalms that is used to mean a pause – LOL. This song is from a folktale that I either heard on Tales by Moonlight (remember that TV show?) or in my grandfather’s house >> but since I remember the song, I think Tales by Moonlight >> based on the assumption that TV music would be of higher quality, resonate more and be more memorable, thus easier to imbibe and internalize. Not sure whether you care what happened in the story. I don’t remember it too well, but I do remember that the person singing was getting into trouble >> THAT’s IT (now, I remember) the part of the song that I can’t remember in Igbo and thus cannot translate, was about how the father’s wife went to the market and bought udala, left them out in the sun to dry, the girl ate them (it was a sort of Cinderella situation, cause I believe she had half-siblings, who were actually given udala to eat, but not her) and the wife killed her for “stealing” from the udala (? – at this point I might be making up my own macabre story) and of course she came back from the dead to torment them (possibly with this song). Udala – now I am convinced that I called it udala as a child because the name udala resonates strongly in that story and with my feelings and memories from the time period associated with when I heard the story.

So I am going to conclude that I most likely called the fruit udala until I worked at Chapel Hill (i.e. for the first 21 years of my life), but it could also be as early as ACO. I really think that it is remarkable that the name agbalumo could overshadow something so strongly ingrained in me. What is all this fuss about a name? Even Shakespeare asked, but unlike Juliet, we Africans know that there is power in what a thing is called. Udala is the stuff of folktales to me. As an adult, the myths surrounding the fruit are amusing to me, although they were terrifying when I was a child. There were countless times when I was afraid that a tree would grow out of my head because I had swallowed a seed. Yeah, I know it sounds ridiculous now, and in truth, I wasn’t scared scared, just a teeny weeny bit apprehensive. Please which sadist came up with this idea to torture Nigerian children of my generation? Because I know it wasn’t only me, I distinctly remember my fellow gullibles.

Additionally, do you remember chewing the back until it turned into makeshift gum – like wow! As I am reminded of that, I don’t even know who I was as a child. Like seriously, eeewww (that is so nasty and not something I, as a germophobe, would do today, even if I was 6, like it is unsanitary? uncouth? to play with your food or to chew it past the time where it gives you nourishment {particularly if you are not going to swallow it} the only exception is chicken bones, but that is a different story). I know some of you did this gum thing as well. My excuse (and I am sticking with it) is that I wasn’t allowed to chew gum as a child and I guess I kind of spiraled to this low as a result, so here is the evidence that you shouldn’t make all these extra rules for your kids #justjoking. I LOVE agbalumo, it is sweet and fleshy, but I don’t only like the taste, I like the process of eating it. As a child, we had to split it into two (because, my mother >> no maggots!), today, I put ¾ in my mouth and use my jaws to break it open (maggots be damned, not really, but yeah).

So here is my assessment – out of all of our Nigerian fruits, agbalumo is in the toughest spot. Other fruits can afford to land anywhere between mediocre and above average, agbalumo does not have that luxury (no one wants to be slapped by that first taste. I know grapefruit is sour as well, but it is meant to be sour). Agbalumo, on the other hand, has to be both sweet and not contain maggots, and with the way most people I know eat it, without first seeing what is on the inside, that’s a lot of trust (and I’m a Nigerian, I have trust issues in general #jokingagain, not really). As a result, I have become an expert in identifying a sweet and good agbalumo. When I see an agbalumo, I don’t salivate in anticipation of its sweetness, first I check it out and then weigh the probability that it is sweet and maggot-free against the possibility that it will slap me. Because who works against their own best interest? The thing about a sour agbalumo is not just that it is sour, but that beyond having the guts to be sour, to add insult to injury, it now still makes you have to go and wash your hands and endure the lasting sticky feel on both your hands and lips >> I can endure that for a sweet agbalumo, I mean the stickiness would be irrelevant, but it just feels like the worst double whammy when it happens with a sour one. I have had less than 10 agbalumos this season, so imagine my delight when I read (23/01/18) on @KitchenButterfly that the best ones come after the rains. Did you notice that it rained today! That’s me dancing azonto!

You can send me an RFP to teach you how to select a sweet and good agbalumo, I’ll teach you, but I’ll have to charge…xxx

How do you eat your agbalumo? I have a friend who eats only the seeds, my own brother claims not to know how to eat it. I’d love to hear from you.

Author’s Notes: That Igbo spelling ehn, I am sure it has k-leg; biko free me, I told you I was Igboruba. I love the interchange between agbalumo and udala in this write up, it was unintentional, but I think it is reminiscent of the Igbo and Yoruba within, everything is all mixed up, beautifully within me.

Akay is a lover of all fruits (except watermelon, yes, she is African and her cred is in tact). She writes from time to time. If you enjoyed any bit of this, you can find more at www.ahshakasha.com