From Ugep With Love: Yedamblongh or Okana w. Kola Nut 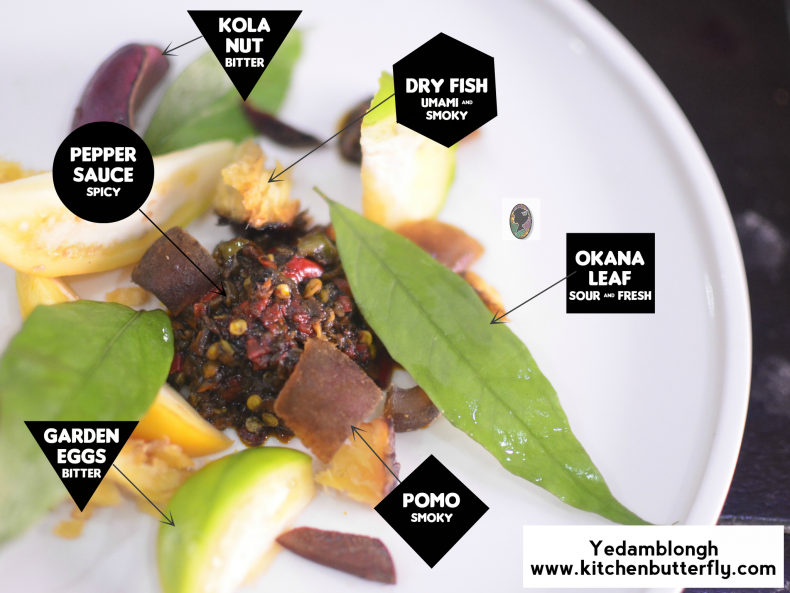 Have you ever eaten kola nut with a pepper sauce? No? Me neither…till now. And I have to thank Carol of Bread & Baskets for this introduction. 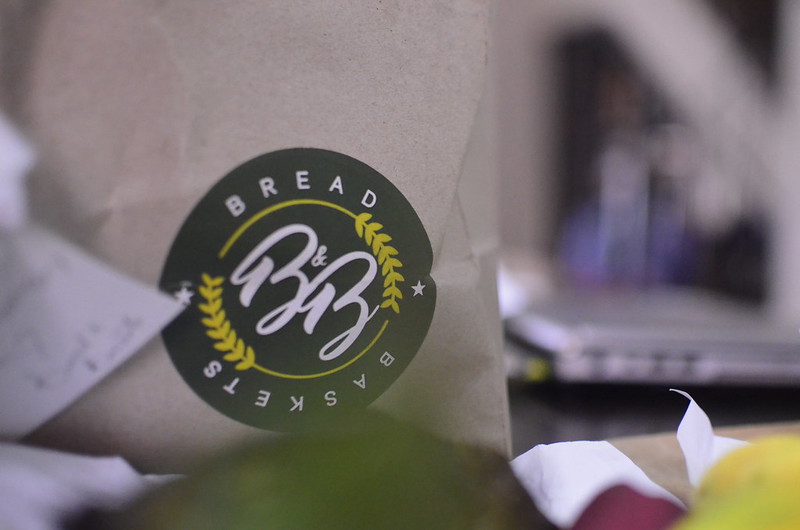 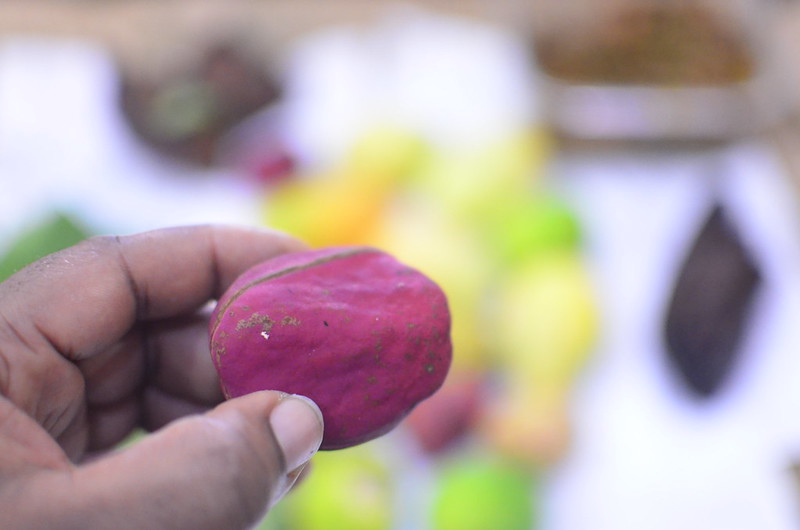 A few weeks ago, I toasted some Nigerian calabash nutmeg, Ehuru and shared a photo on instagram. Wofai sent me a message saying that where she was from – Ugep – they added to a pepper sauce which formed a dip for fresh leaves and kola nut. Ugep is a place I’ve heard about. I have friends who are from Ugep and it’s always struck me as fascinating and with this discovery, even more so. 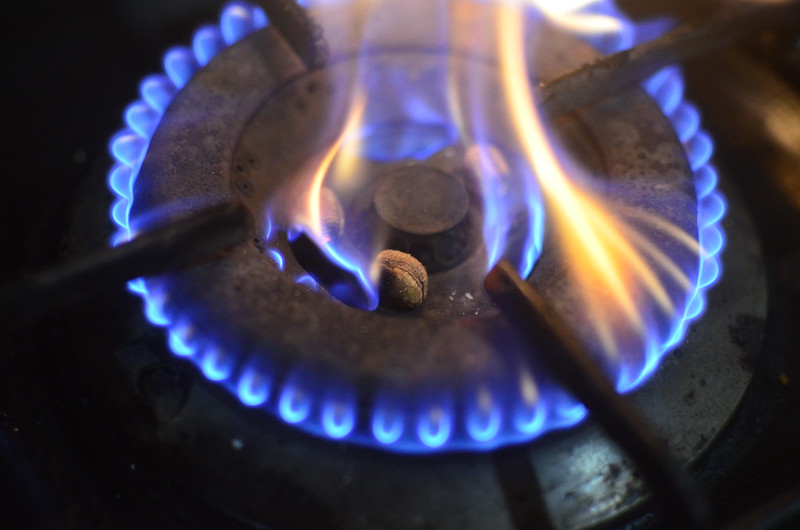 I’m also stunned as to how much there is to learn about Nigerian cuisine. Like Kola nuts. How they are eaten and used in ways I am totally unfamiliar with. My idea of Kola has always been a ‘bite’, little bitter bites, like communion bread – eaten with prayer at the start of an event – or late at night if you’re at school and want to avail yourself of the caffeine to stay up and study.

In traditional Nigerian culture and customs, Kola nuts are important. They are a mark of expressing hospitality, especially during traditional ceremonies. I grew up eating tiny bits of kola, broken off and passed round on trays or plates at the start of ceremonies – naming, traditional weddings, conferment of titles, and the like.

Different tribes have different ways of ‘breaking kola’ and different types/ colours of kolas exist. The Igbos break it and serve it with okwuoji and ose oji, the Yakurr of Ugep – wrap it in fresh Okana leaves and dip that into a sauce.

But this isn’t my story – this is Carol’s story and I’m thrilled she’s sharing her memories of the Okana tray, of Yedamblongh with us.

Of Ehuru: Where I’m from, (Ugep) we pound them into fresh pepper, add a little palm oil & use it to eat raw afang leaves or known as Okana.

Of Okana pepper: talk about gorgeous colours and a beautiful texture – bursts of green and red. You can tell that this was treated with care, probably hand pounded then combined with the oil and the ehuru

Of Okana/ raw Afang: these leaves are gorgeous – slim, long and green. They have a mild, fresh taste.

Of Kola nut: I received two varieties – a purple one commonly called ‘red’ kola and a creamy- light green one

Of Dried fish: smoky and choc full of umami

Of Pomo, also called Canda, Kanda, the hide of cows – and no, not tanned, not leather.

Yedamblongh, this is how Okana is referred to – but how do I explain a word that is a phrase, that means joy and also ‘medemede*’ and also enjoyment all at the same time; Carol

My fondest memory of Okana? Hmm that’s a tricky one, because my first memory of Okana –  ‘Afang leaf’ made me wonder why my family members were chewing kola nut wrapped in raw leaves with without squinting or making  faces. 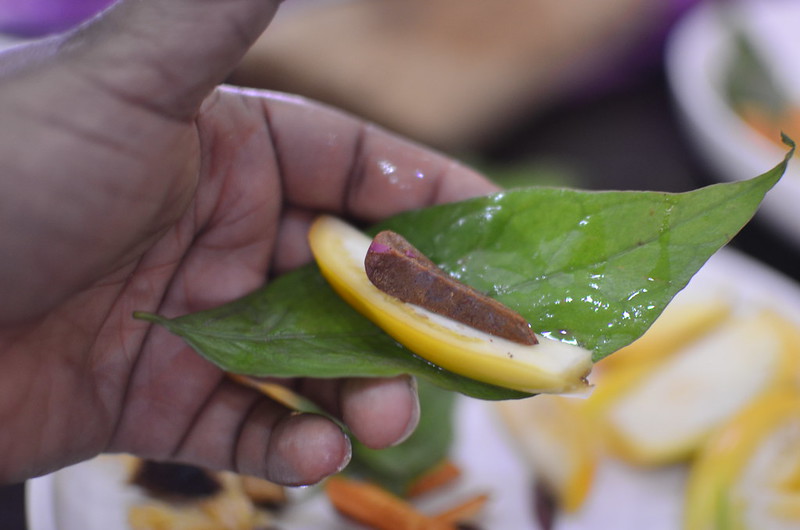 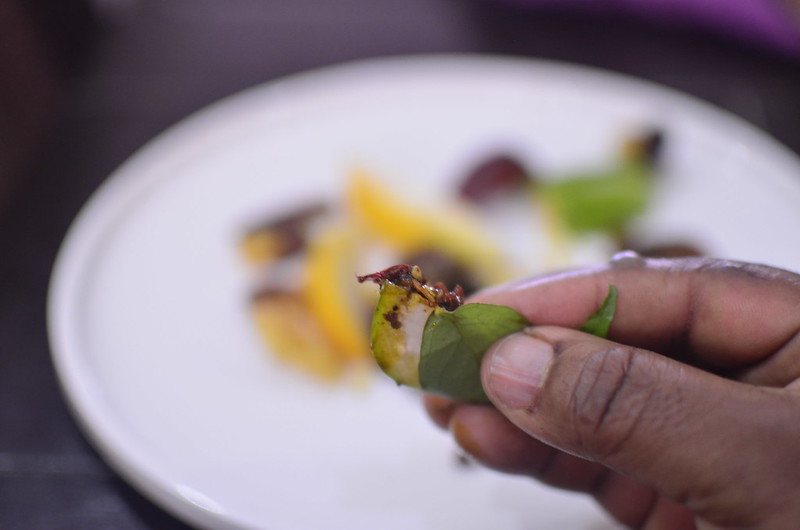 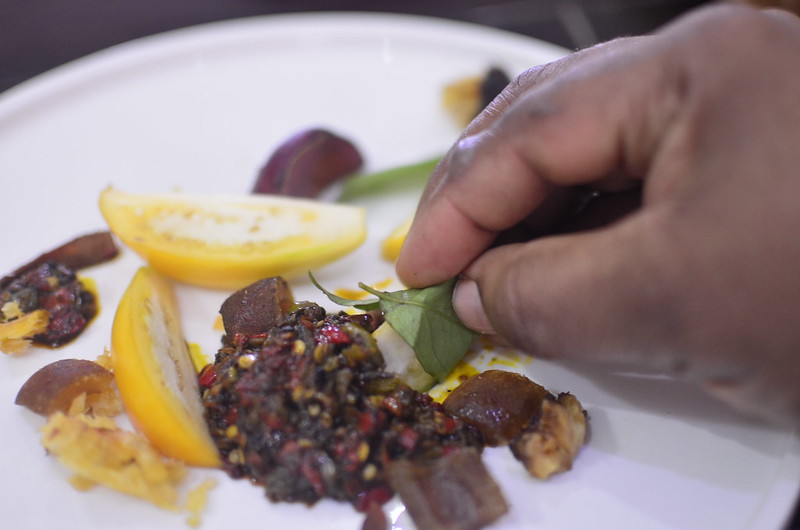 I remember trying it once and spitting out right after. But of everything I remember, what sticks fast in my memory is the joy – pure, unadulterated joy – the conversations that grew louder and louder and of course, the laughter. Something about dipping your hands into that pepper makes you a pro at sarcasm. 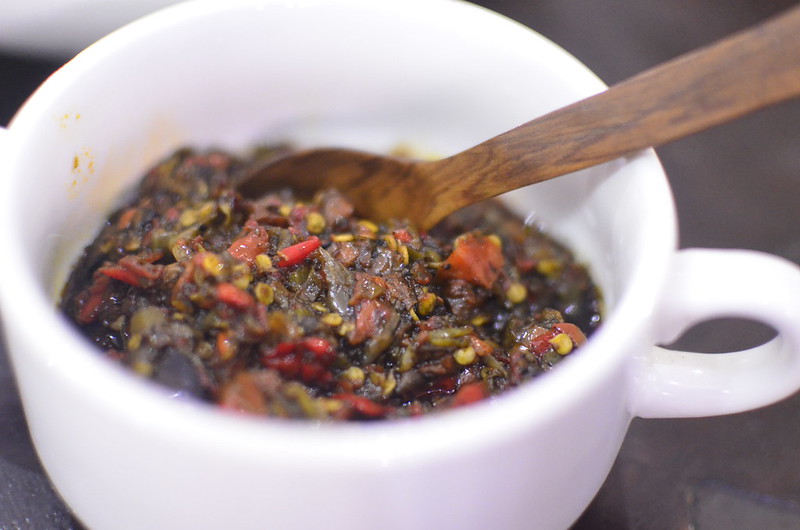 Growing up, I realized really quick that I had a really big family – uncles, cousins, family friends who became aunties and uncles, relations with the same surname and first name and people who just appeared in your house who claimed to be part of the linage but somehow were removed. But these people, whatever the category they fell into, they dipped their fingers into the oil with skill.

The process was simple but delicate – pick two or three leaves of fresh afang, break some kola nut and wrap in the leaves, dip into the oil bowl so that when it comes out it doesn’t spill, pick some dried fish, dip into pepper then pick a piece of garden egg into the oil followed by some canda (dried pomo). 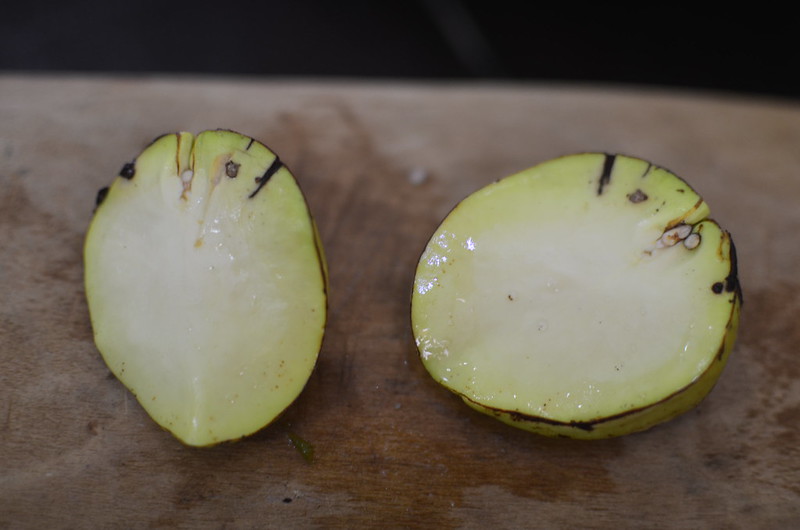 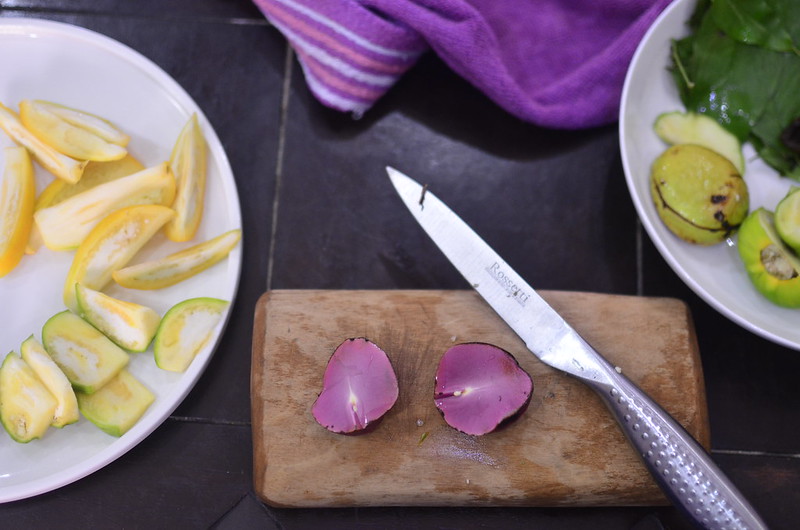 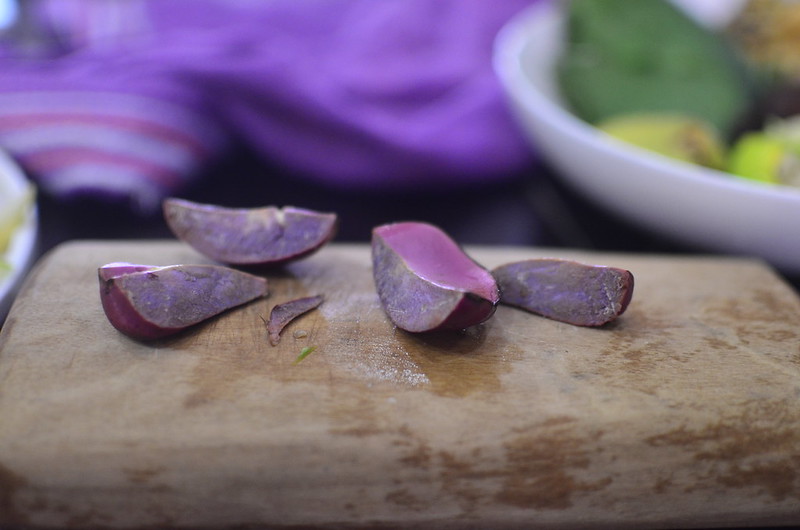 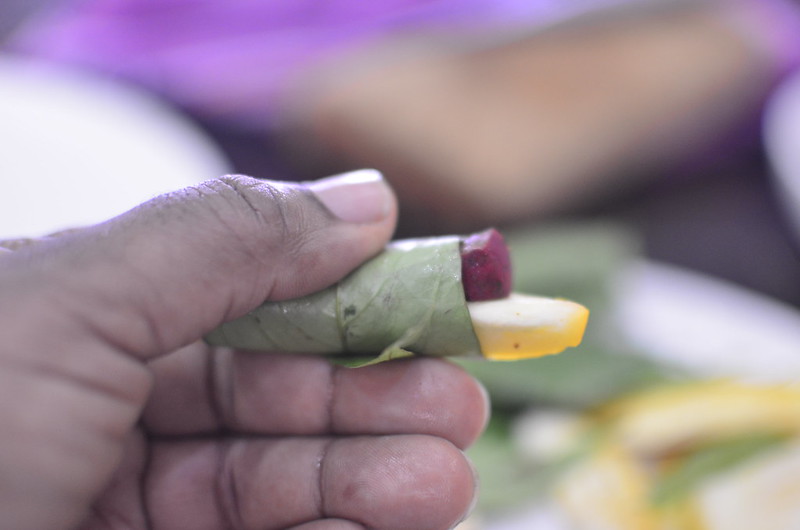 This process is amazing because the delightful flavours are ‘seen’ immediately from the facial expressions of everyone around the Okana tray. The joy for us ‘hangers-on’ was the opportunity to dip your fingers into the pepper bowl or be offered some pepper in a spoon with garden egg or fish. For me, I could never understand chewing on leaves and how kola nut brought a smile as opposed to a frown, so I stuck with what felt right: dried fish, smoked canda and garden egg. The sense of belonging when I sat around that table, the stories shared and most of all, the licking of the plate when it was all over – I believe my love for pepper started there.

Whenever there was a delay from the person with the responsibility to prepare the tray, this question always echoed ‘Okana ma ki?’ meaning ‘Where is the Okana?’ This made me strangely happy – it still does now – because I knew fun, noisy, crazy family, was about to ‘happen’. Unfortunately, I still cannot chew on raw Okana in my 30s, I’ve stuck to fish and garden egg. 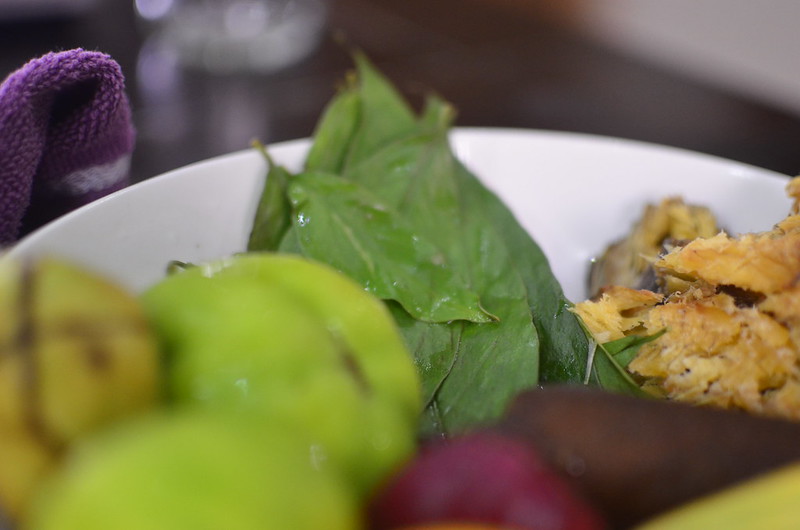 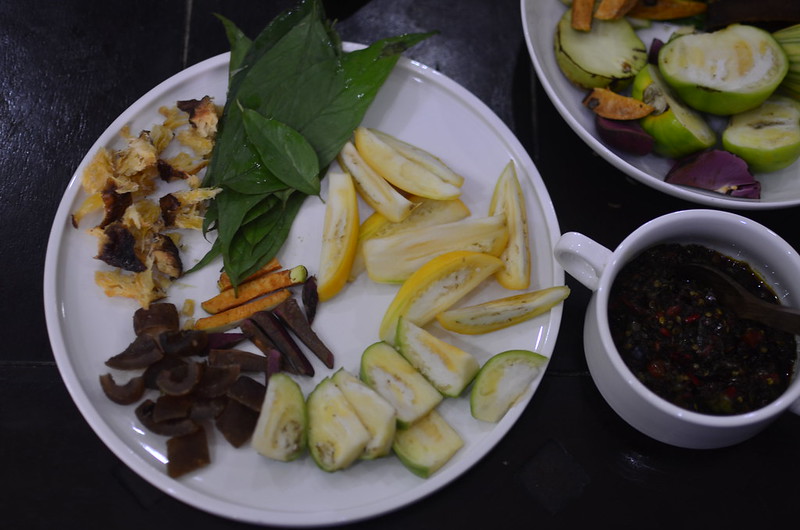 This tray comes out every time – at weddings, family meetings, short visits, relaxed evenings and even after hot squabbles between family members. Just recently, my mum had a guest over and she made me send over fresh Okana through a dispatch company/rider because the market woman at the market close to her wasn’t around, but I knew the tray wasn’t going to be as fancy because of the uniqueness of the event – a traditional wedding tray display is different from a ‘left over’ your-uncle-is-coming tray display. 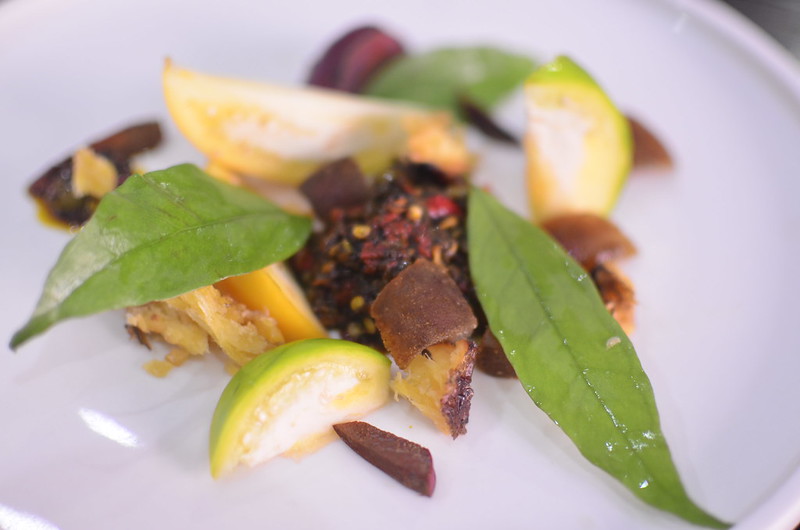 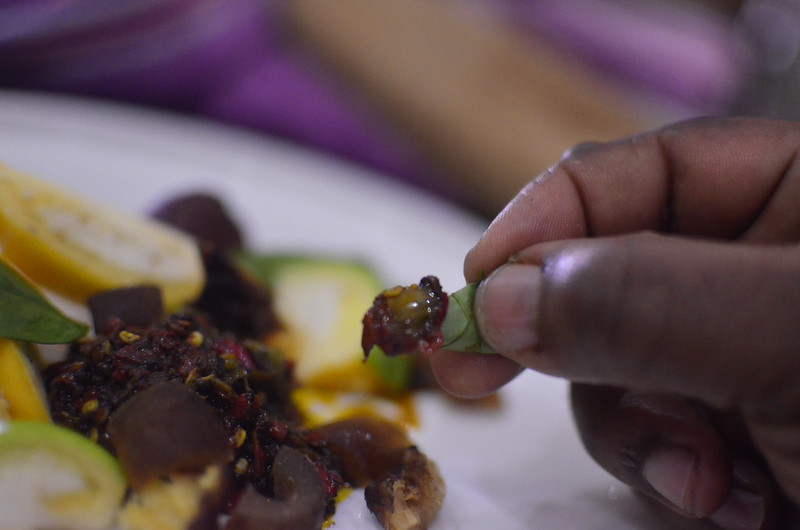 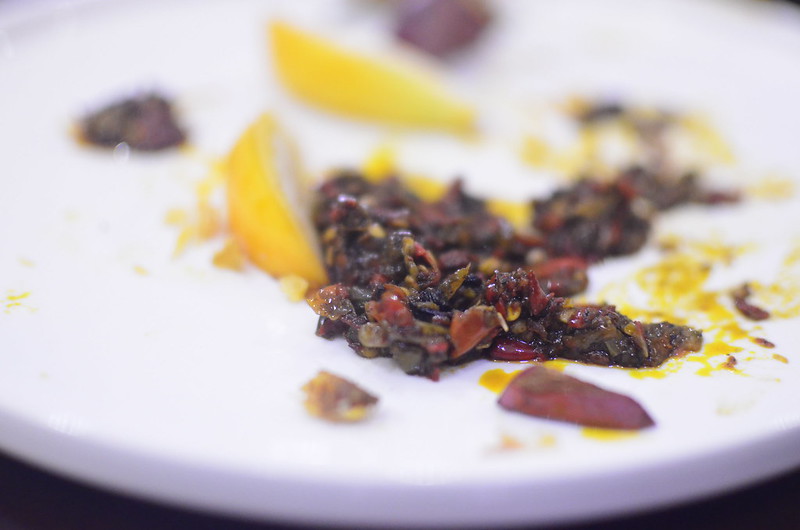 Did you ever think it possible – if you’re Nigerian – that Kola nut could be more than a snack? Broken for more than ‘bread’ and prayer and welcoming? Well, I didn’t. If you have any more interesting recipes for Kola, let me know. I have a couple more – featuring yam mash and boiled yam. Coming soon.

Passionate about food in its entirety – cooking, eating, dreaming, writing and photographing it. ‘Traveller, by plate’, using foodways – the social, cultural and economic practices relating to the production and consumption of food to explore Nigerian cuisine & the world for ‘food is more than eating’.
You might also like
Classic Nigerian KitchenGarden egg recipesNigerian CuisineTravel & Exploration

On Kilishi: With Tigernuts & With Peanuts
Kitchen Butterfly is a Winner!