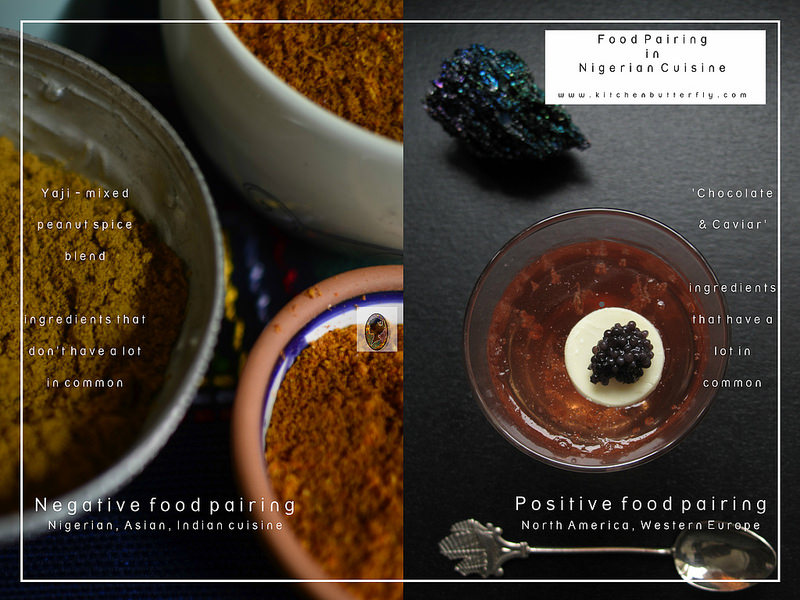 Food pairing – combining ingredients with others that are really similar (positive) or really different (negative).

Cuisines are defined by ingredients, shaped by influences – what grows around you, your climate, who has been in your space. Legacies of colonisation, of slave trade make it to the plate today – from Lagos to Bahia and every place in between.

My primary fascination with food is the discovery of the similarities and differences which might not be immediately obvious.

Like how different cuisines handle monotony in the texture of cooked fish. In African, SE Asian, Indian and more tropical cuisines, chilies and spice are used to cut through the richness of fish. In Western cuisine, citrus and vinegar perform the same function. So, as cooks different methods, techniques, ingredients are used but the function – the understanding of the result is the same. Ain’t that something?

And how bitter isn’t limited to one cuisine but is found in the dandelion greens of America and the endives of Western Europe, the bitter leaf of Nigeria and on and on and on. The treatment of these various bitter vegetables is varied.

Thinking about this has led me to Foodpairing and the understanding thereof. It is based on the belief that ingredients, elements that share major flavour components will work together in a dish. This works with flavour understanding at an elemental level and is the guiding principle, the building block for composing dishes. And that’s only one half of the story.

Foodpairing is a method for identifying which foods go well together. The method is based on the principle that foods combine well with one another when they share key flavor components. Foodpairing is a relatively new method and is often confused with wine and food matching. By contrast, foodpairing uses High-performance liquid chromatography, gas chromatography and other laboratory methods to analyse food and to find chemical components that they have in common; Source

.Read: The Science behind Foodpairing

The other half? The approach to food pairing is markedly different depending on where you are. It is described as positive – where ingredients share ; and negative where ingredients with different chemical profiles are paired, and where spices and spice blends shape the flavour patterns.

Researchers analysing Indian recipes have found out that ‘…specific ingredients dramatically effect food pairing. For example, the presence of cayenne pepper strongly biases the flavor-sharing pattern of Indian cuisine towards negative pairing. Other ingredients that have a similar effect include green bell pepper, coriander, garam masala, tamarind, ginger, cinnamon and so on. Whether it is lemon rice, masala dosa, paalak paneer, vegetable kurma or tadka daal and many other dishes – each one of them have their unique final component that brings final mouth-watering taste for the dish. All these components have contrasting flavors.’

I could very well say the same for Nigerian cuisine, with its spice blends and seasonings, from yaji to peppersoup spice and banga.

In other words, spices make the negative food pairing effect more powerful, a phenomenon never seen before. “Our study reveals that spices occupy a unique position in the ingredient composition of Indian cuisine and play a major role in defining its characteristic profile,” say Jain and coworkers; Source

I agree. When I juxtapose garam masala (a spice blend) with our peppersoup spice, or Banga – palm nut soup spice, I conclude again. And when I think of our use of ginger, garlic and turmeric, not to mention cooking styles and approaches, I conclude again, and again and again that Nigerian cuisine is very much ‘negative’ pairing.

Is there something in history/ climate/ geography that predisposes West African cuisine, Indian and other Asian cuisines to the use of spices? The heat? Heritage of spices and the knowledge they’ve had for centuries – their medicinal and health value? What is it that keeps spices and their use alive? That dictates this ‘negative’ pairings?

This doesn’t mean that there aren’t elements that are ‘positive’. Like suya – a great combination of beef and a peanut spice rub, as visualised in the Flavour Connection Taste map – a super cool distribution of flavours across a number of categories. 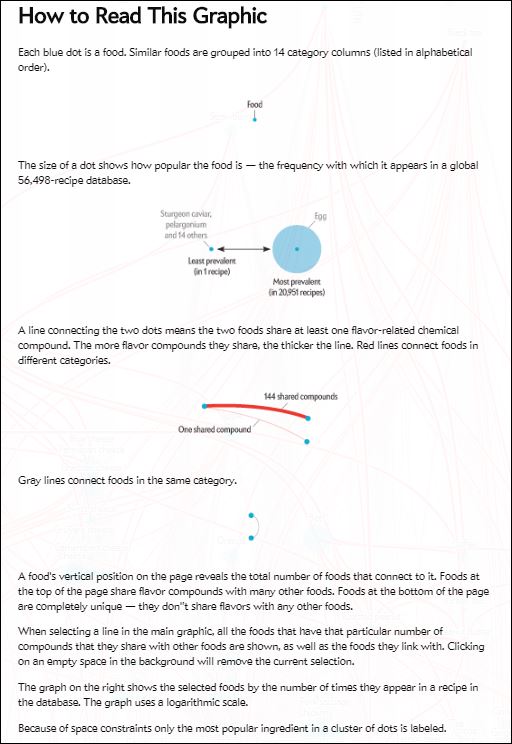 So Suya – beef and peanuts and great pairing. They share some flavour compounds – and while I’m not sure which ones,  it might explain the perfection that suya is. 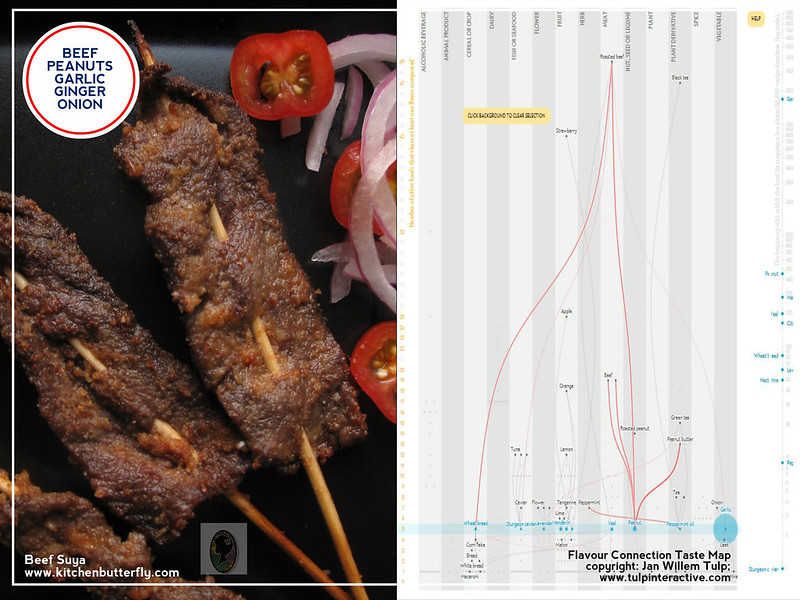 And guess what – from the flavour connection map, peanuts and beef are a cracking combo. But we already knew that. I must confess that this map can be confusing and I’m still trying to suss it out but hey – I thought I’d share it still. Who knows, you might grasp it much than  moi :). 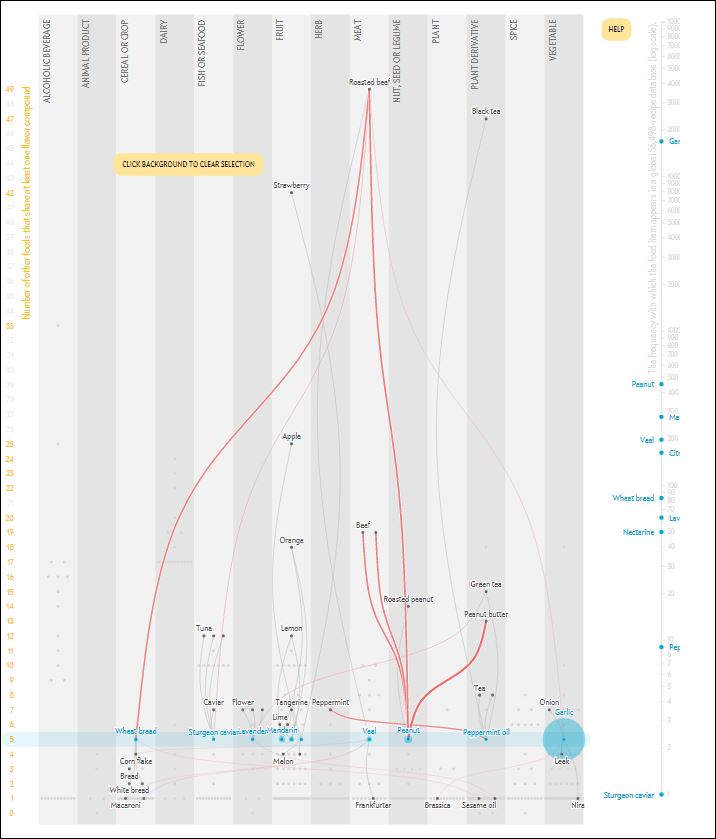 Positive food pairing isn’t always as obvious…it too is changing course, going deeper to unearth treasures on cellular levels :). Take chocolate and caviar for instance. The first time I heard of it via Heston Blumenthal, I was like ‘No. No way does this work’ but guess what? It does. Why? Well both the chocolate and caviar have high levels of amines which make them compatible, especially if you’re matching sweet and salty. 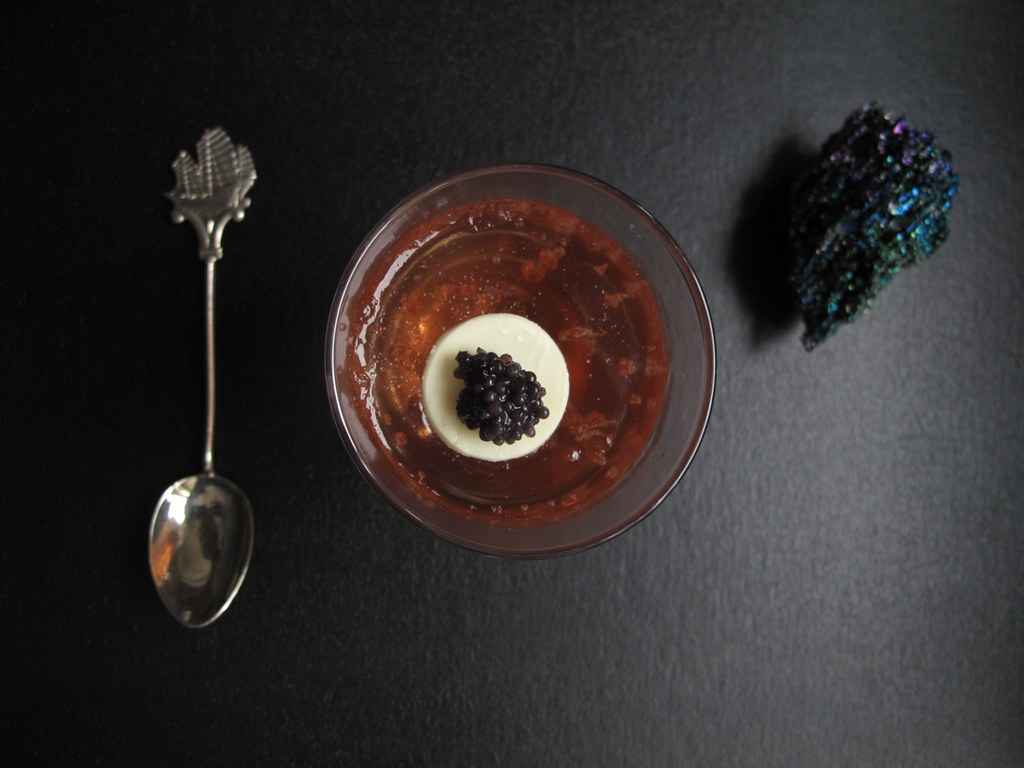 I had to try it. Read my  Chocolate & Caviar Jelly

Chocolate pairing: which chocolate to choose?

So yes, the end. My point really was to put Nigerian cuisine in the context of global cuisines so we understand what it is by definition and can include it in much broader discourses and research. If need be too, we’ll build the language and establish the lexicon. Nigerian food must reign.