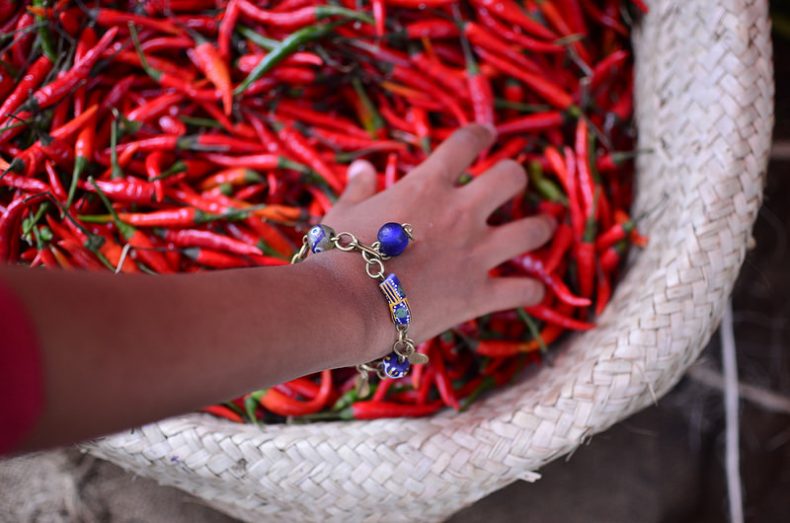 I always had this idea that Kenyan food didn’t use pepper or chilies. Let me say I underestimated both. True, chilies are common but peppercorns are, and that too is heat, ladies and gentlemen.

One of the first things I ate in Nai was a Thai Chicken salad at Java House – it set my mouth on fire! It was so hot…and this was day one. I couldn’t believe it. 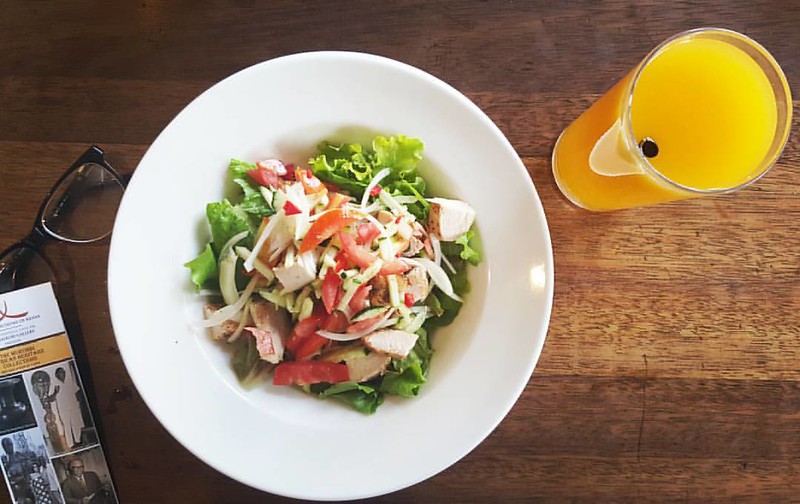 The Thai Chicken Salad at Java House – hot, hot, hot but fresh and delicious. Java House is a chain of coffee bars/ cafes started in 1999. The Java House team wanted to introduce a coffee drinking and gourmet café culture to Kenya and they have done so beautifully, with branches spread around city centres. I went to 4 or 5 in Nairobi each with gorgeous wooden furniture, great salads and refreshing drinks like the fresh passion fruit juice shown here

Then I went to Ngara market and saw loads of gorgeous chilies. In Kenya? Wow. I didn’t know they had ’em. There were bird’s eye chilies and other kinds. Really vibrant – I wonder who uses them though because not many places I went to had ‘hot’ food – spiced and tasty, yes but not hot. 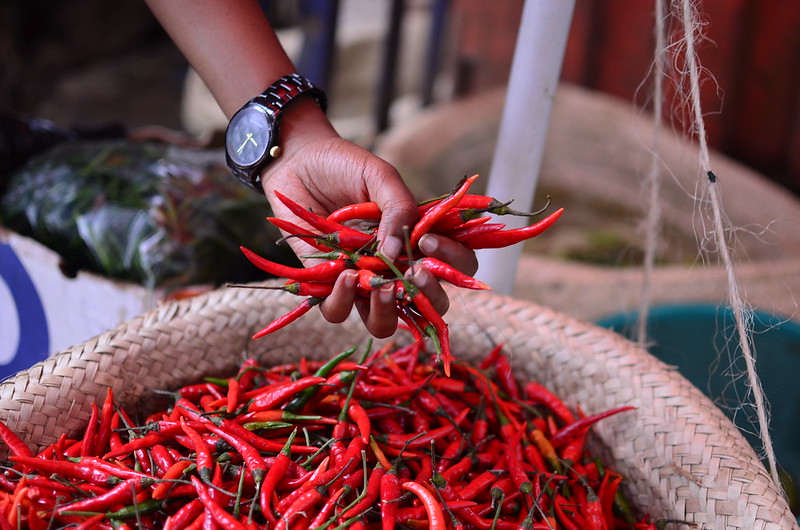 Bird’s eye chilies are some of the hottest peppers. There is some debate about the origin of its name. Some call it bird’s chilies – alluding to point chilies…like bird’s beaks. Serious Eats says ‘Bird chile is the name of the dried form; drying the chile gives it the hook shape, similar to a bird’s beak.’ Or is it because your eyes become red if you get the remnants of these chilies into them? We may never know…shout out if you do. Thank you 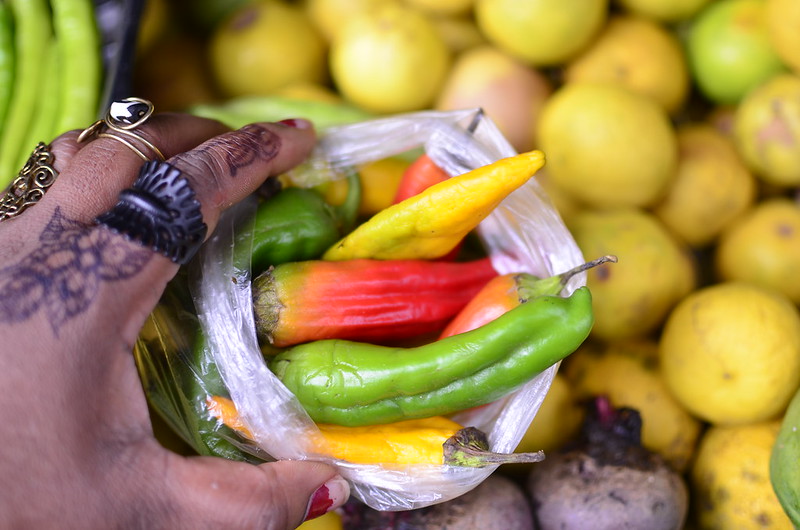 The chili pepper (also chile pepper or chilli pepper, from Nahuatl chīlli [ˈt͡ʃiːli]) is the fruit of plants from the genus Capsicum, members of the nightshade family, Solanaceae. In Australia, Britain, India, Ireland, New Zealand, Pakistan, South Africa and in other Asian countries, it is usually known simply as chilli. The substances that give chili peppers their intensity when ingested or applied topically are capsaicin and several related chemicals, collectively called capsaicinoids. Chili peppers originated in the Americas. After the Columbian Exchange, many cultivars of chili pepper spread across the world, used in both food and medicine. Chilies were brought to Asia by Portuguese navigators during the 16th century; Source: Wikipedia 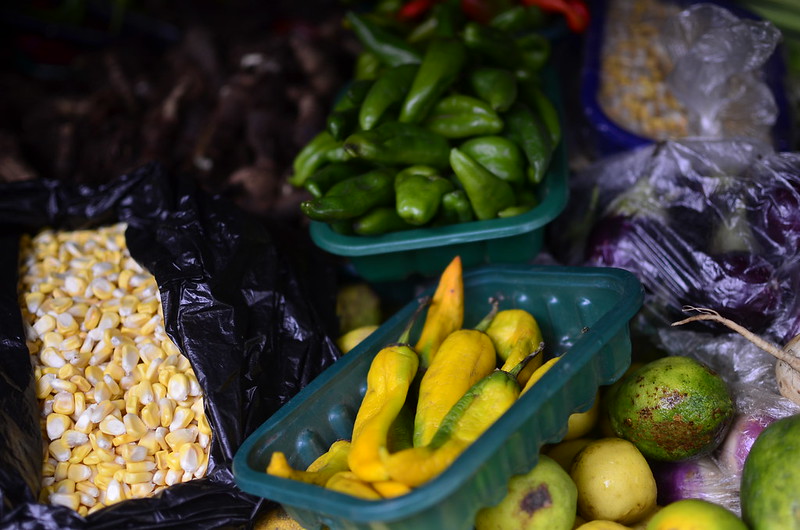 The Scoville scale measures the intensity/ pungency of chili peppers. It is considered subjective because it is dependent on the capsaicin sensitivity of testers, such that two testers with different sensitivities would react differently to a specific chili. The chilies pictured here were sweet and fragrant without any heat. For me, they would rank low on the Scoville. The scale is named after its creator, American pharmacist Wilbur Scoville who devised this method in 1912. 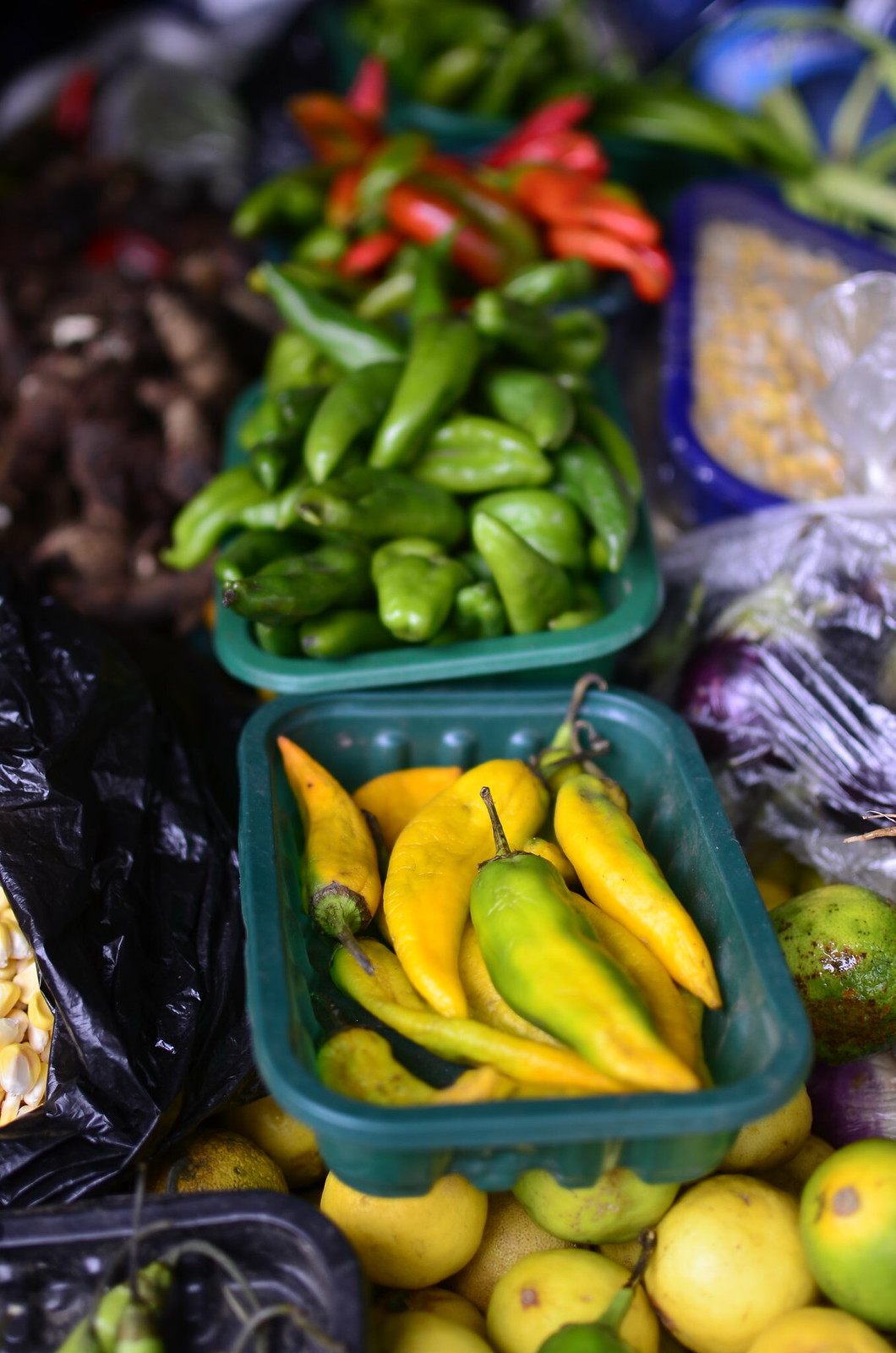 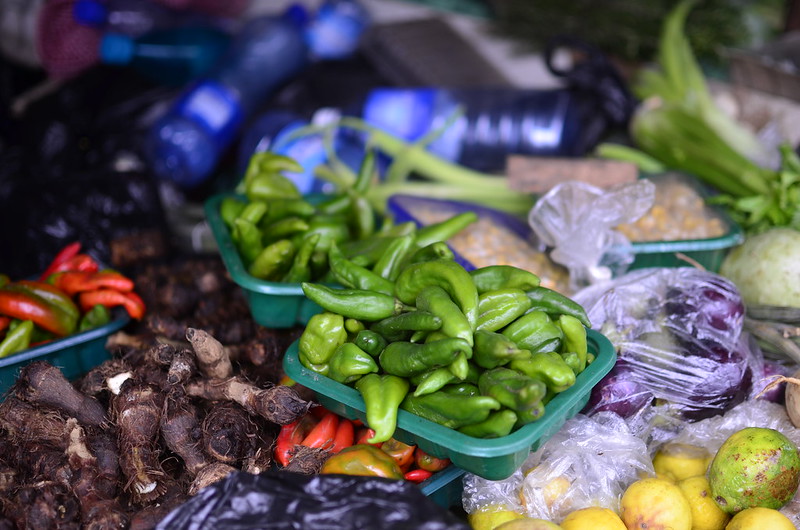 I find the flavour of Green chilies to be fresh and clean. 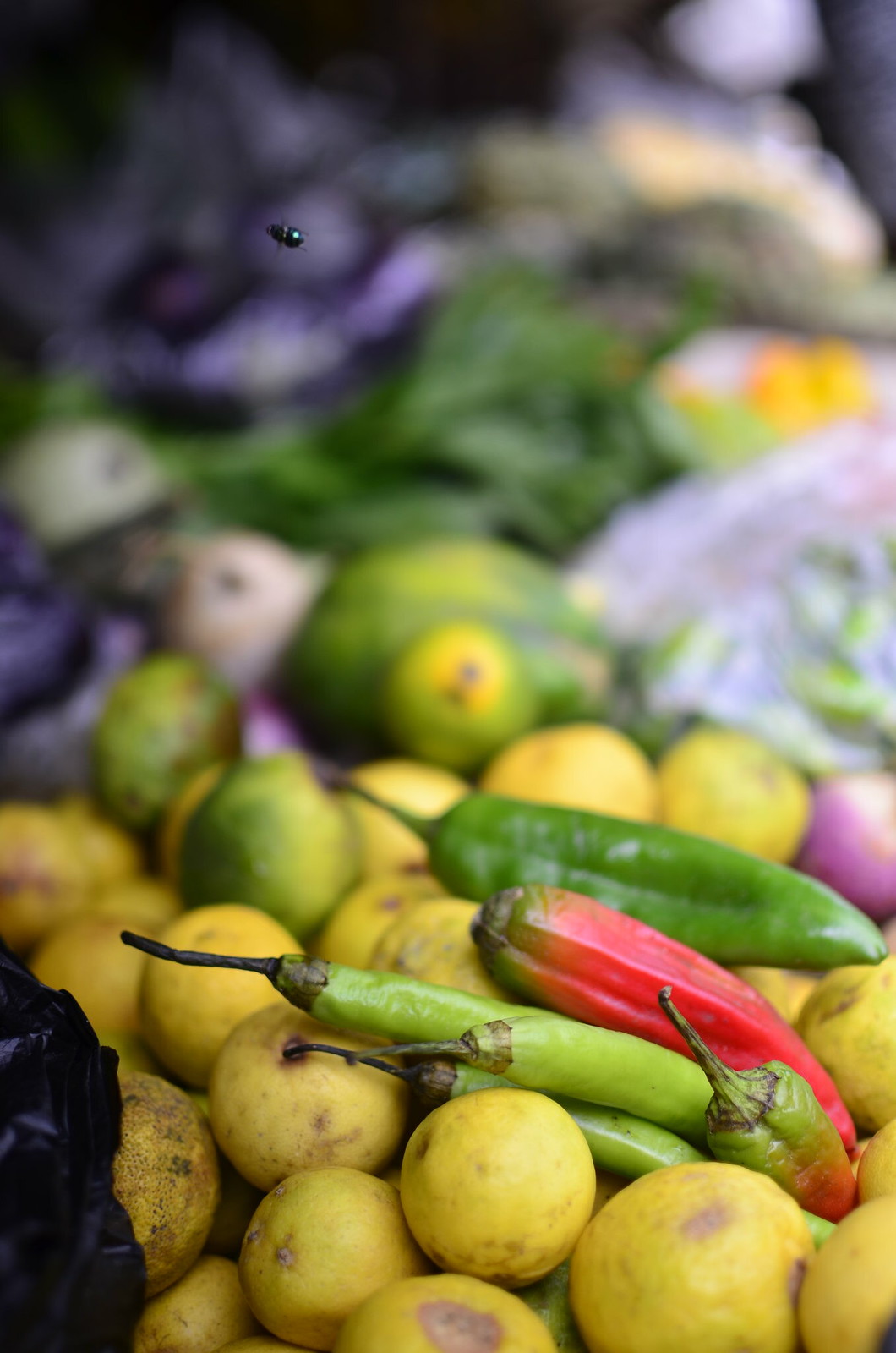 Most of the chili’s heat is in the seeds and pith. One must take care when chopping and cutting so the lethal heat doesn’t cause unbearable pain.

How to clean chilies 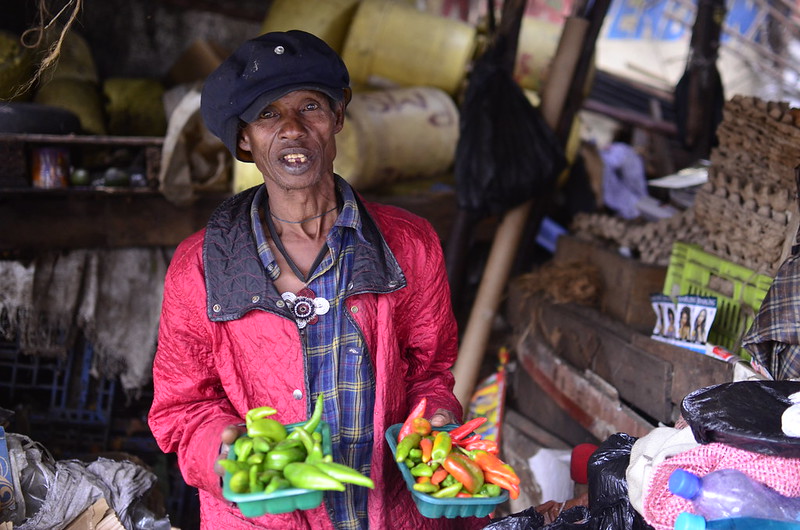 I loved this gentleman’s face at the Ngara market – he was one of the few stalls with a range of chilies, but also one of the few who were open to talking and having photos taken of the produce.

The one thing I found interesting was how a number of Kenyan friends could use a lot of black pepper which I found hot, yet not tolerate chilies. Interesting ehn – I guess spice notes differ and one should not take reports for granted.

Passionate about food in its entirety – cooking, eating, dreaming, writing and photographing it. ‘Traveller, by plate’, using foodways – the social, cultural and economic practices relating to the production and consumption of food to explore Nigerian cuisine & the world for ‘food is more than eating’.
You might also like
SpicedTravel & Exploration