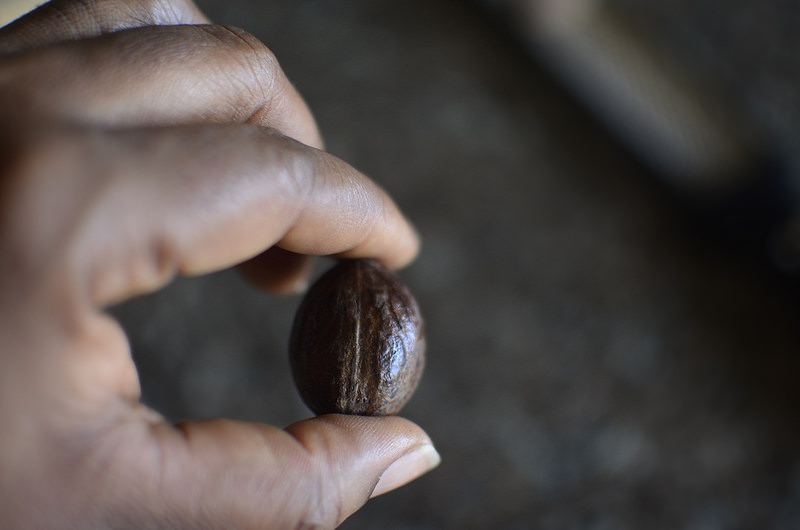 From journeys to Dubai souks, to cupboards in my kitchen, many spices are resident in my kitchen. From nutmeg to saffron and fragrant tea mixes, full of rose and jasmine. There are the thickest shavings of dried garlic, carob pods that hold ‘frozen’ glistening pools of flavor, dried galingale – I’ve never seen that before, accustomed as I am to the bright yellow rhizomes of Turmeric and the wrinkled slices of dried ginger– ever present in my Zobo, for the warm, back-of the throat-heat it brings.

There’s nutmeg in its shell, rich, dark, shiny. This is how I see it in every sack in the Deira souks. It is so interesting that every attempt to take a handful of spices from the front displays is met with honesty from the merchants. I say honesty because those spices have been exposed to all the elements – clammy hands, touching, feeling, smelling; rising dust, age etc. They are best left as feasts to the eyes.

I half expect to see the nutmeg dressed in mace – nutmeg’s tan/orange fragrant cloak. Instead I see it shelved on its own. Shelled. 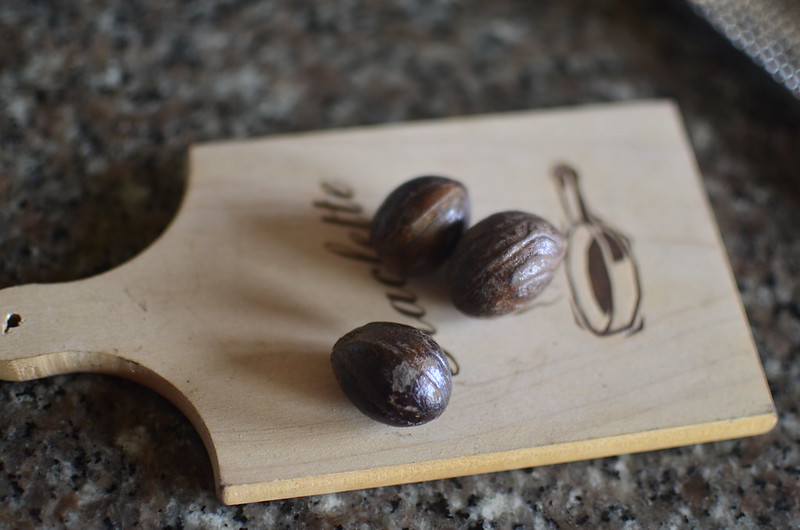 Nutmeg is the seed of the tree, roughly egg-shaped and about 20 to 30 mm (0.8 to 1.2 in) long and 15 to 18 mm (0.6 to 0.7 in) wide, and weighing between 5 and 10 g (0.2 and 0.4 oz) dried, while mace is the dried “lacy” reddish covering or aril of the seed. The first harvest of nutmeg trees takes place 7–9 years after planting, and the trees reach full production after twenty years. Nutmeg is usually used in powdered form. This is the only tropical fruit that is the source of two different spices. Several other commercial products are also produced from the trees, including essential oils, extracted oleoresins, and nutmeg butter; Wikipedia

I’m interested ’cause I have never seen the cage that holds a hardy nut that I use with caution. I say caution because I find, use too much and it becomes overpowering.

Apparently too, in large quantities there are some toxic effects.

Of all the well-loved seasonal spices, nutmeg stands out for its long and slightly twisted history. In the Middle Ages, it was used to end unwanted pregnancies. More recently, desperate prisoners embraced it as a rather miserable drug substitute. So, on occasion, have teenagers, some of whom wound up at poison control centers. A couple of years ago, a man in Sweden claimed that nutmeg had induced him to spit at strangers on the street; The New York Times

I add it to cookies and puff-puff and that’s mostly it. Across the world, it skirts sweet and savoury recipes, from squashes to pumpkin pie, mulled wine and even some blends of garam masala, the definitive North Indian spice blend.

The toxic dose of nutmeg is two to three teaspoons

I assumed no one would ever come close to that amount unintentionally until I saw report in which a couple ate some pasta, collapsed, and were subsequently hospitalized. It was a big mystery until “On close questioning, the husband revealed that he had accidentally added one third of a 30g spice jar of nutmeg to the meal whilst cooking it.” That’s about 4 teaspoons–I don’t know how they could have eaten it! I imagine the poor wife just trying to be polite; Nutritionfacts

I never buy nutmeg powder for it lacks both the fragrance and depth of flavour I’m accustomed to. Unshelled was always my thing, that is till I discovered this ‘shelled’ version.

The shell is fairly thin, crackable by teeth. If that’s not an option :), you could smash it…or use some tools you might have at your disposal – a nut cracker or…the saw teeth present on some brands of kitchen shears/ scissors. 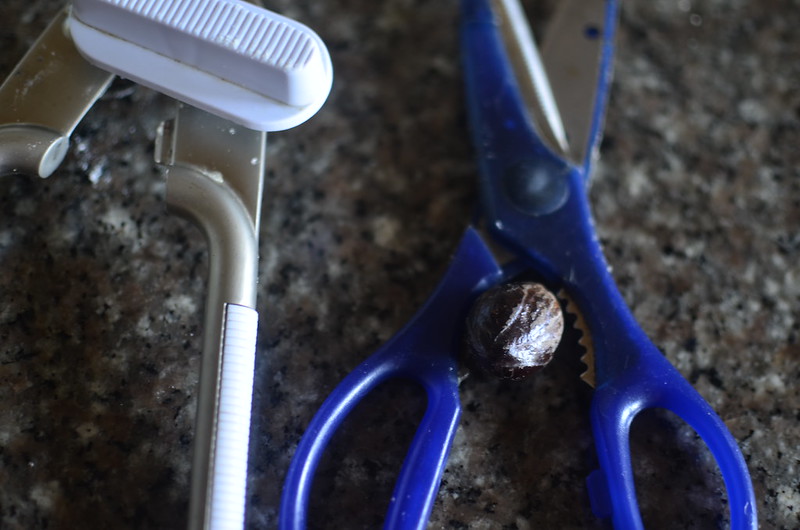 Once broken, the nutmeg I know is revealed. 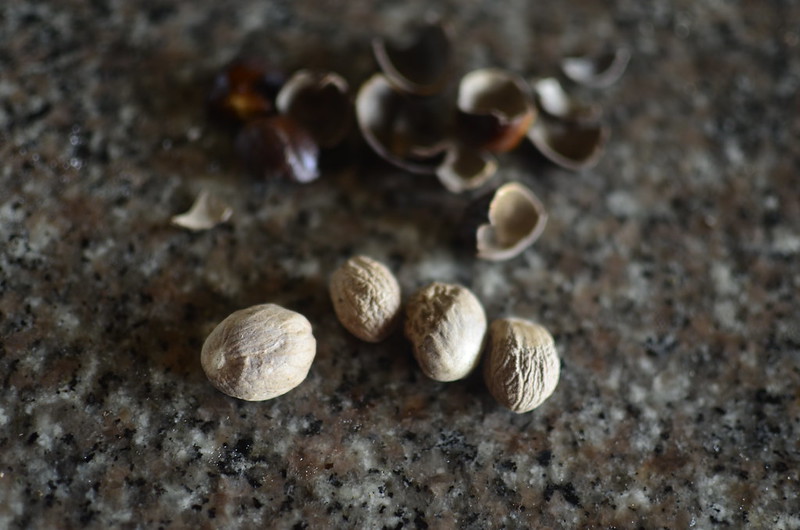 To grind, you’ll need a ‘rasp’ side to your grater. The rough edge resembles metal punctured from the inside out with a nail, till a set of prickly open – rasp holes form a grating edge. 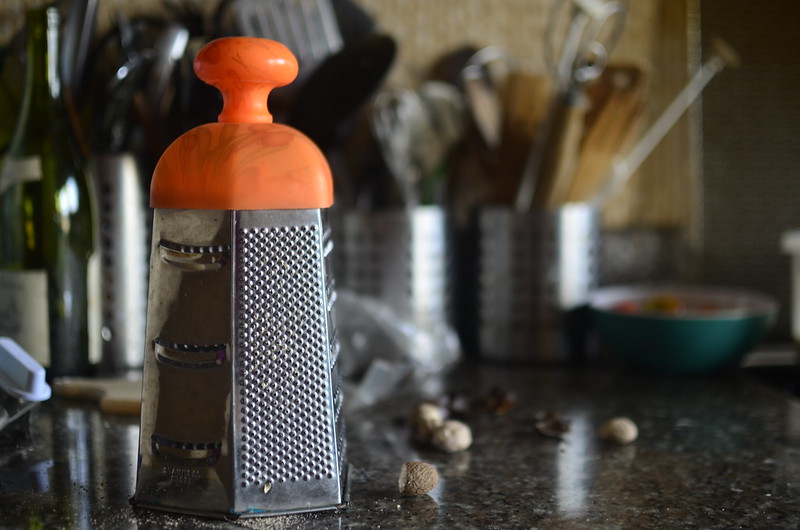 And then the inner beauty, of dark ripples like roots in a brown sea is revealed. As are the warm, comforting scents of mulled wine and eggnog, of Christmas and berries, cold and dark, and red.

And that’s mostly it.

So, ladies and gent – take care of the following: ditch powder for whole, even if shelled for you’ll get richer, fresher flavours instead of dull and dusty; and…do not overdose.