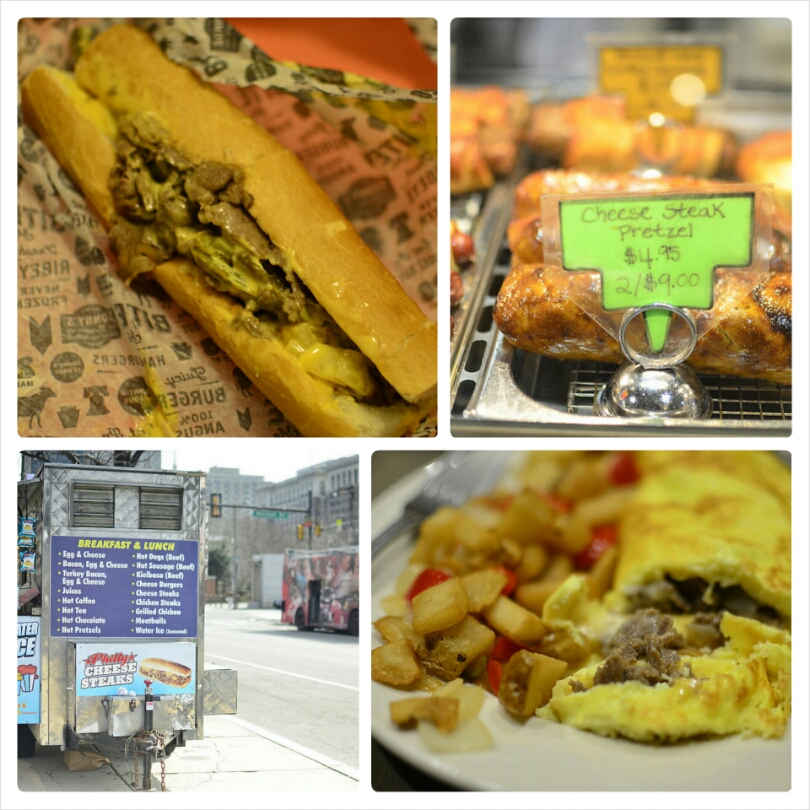 I vaguely remember Philly and its signature sandwich though but I’m reminded by everyone who knows I am headed to Philly to ‘Make sure you try Philly Cheese steak’. I suspect it has cheese and steak in it but I cant muster much more by way of remembrance till we arrive in Philly.

The funny thing is I expected to see Philadelphia cheese up and everywhere. Turns out that was not the case.

We had our first cheese steak the night we arrived at Jim’s, on South Street. I barely had time to collect myself before the order was ready – hot, chopped steak off the flat-top grill, with chopped onions. 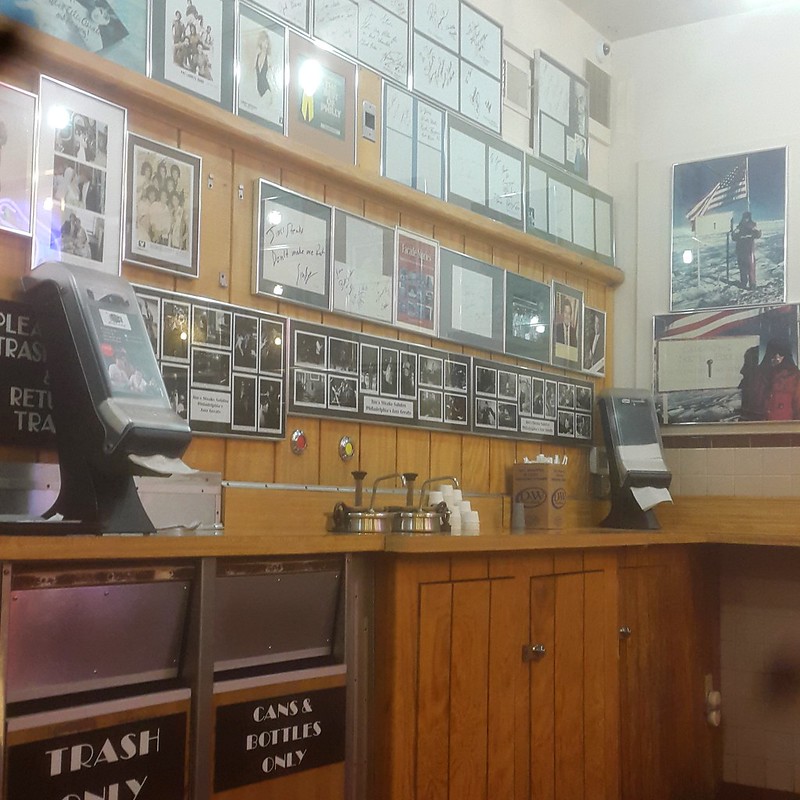 We watched as men sliced boxes of Amoroso rolls – it said on the box, as we went up the stairs to sit and eat, with our  drinks.

The Bread: One of the most important elements of the cheese steak. Yeah, it is the hold all for the pile of steak and onions and cheese that must go on – it must possess the capacity to do its job. So, locally produced by a local Italian baker – Amoroso rolls were what we saw in the two cheese steak establishments we visited.

The rolls are a cross between baguettes, hotdog buns and pizza dough :). Slightly longer, roughly 25cm, soft and somewhat chewy, I found the tops had a thin crisp coating which combined with the grain-crusted base crackled softly when bitten.

I didn’t expect this of the rolls – I thought they’d be more crunchy baguette type for a textural contrast as the meat is soft and juicy but … It worked out okay. Methinks but it isn’t the way I woulda constructed it.

I ordered one with provolone – I call it mozzarella on wings. I didn’t understand any of the other varieties – American or Cheese Whiz. Each roll sliced in half didn’t look a mountainous task…till we sat down. The first few bites were a lesson, a very awkward one – so much meat, how did one wolf this down? Eventually, I demolished it block by block – I would bite into the top, then finish from the side.

The first few bites were also ‘meh’. The only thing to salvage it was ketchup, and salt, and black pepper. I mean who puts unseasoned beef in a sandwich? Well, happens in Philly, appaz. Then the dripping began – oil in a steady stream. I believe it came from my cheese as none of cheeseless sarnies had the same problem. We ended up looking at each other like ‘This is it? Okay’, in a rather unimpressed fashion. 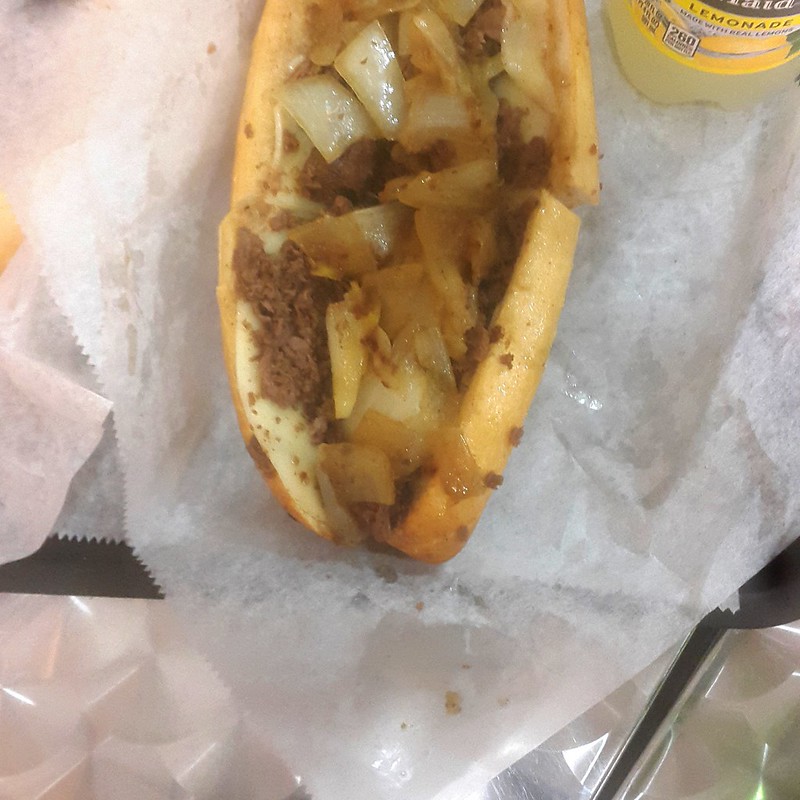 The children loved the rolls so much so we purchased a number of them. 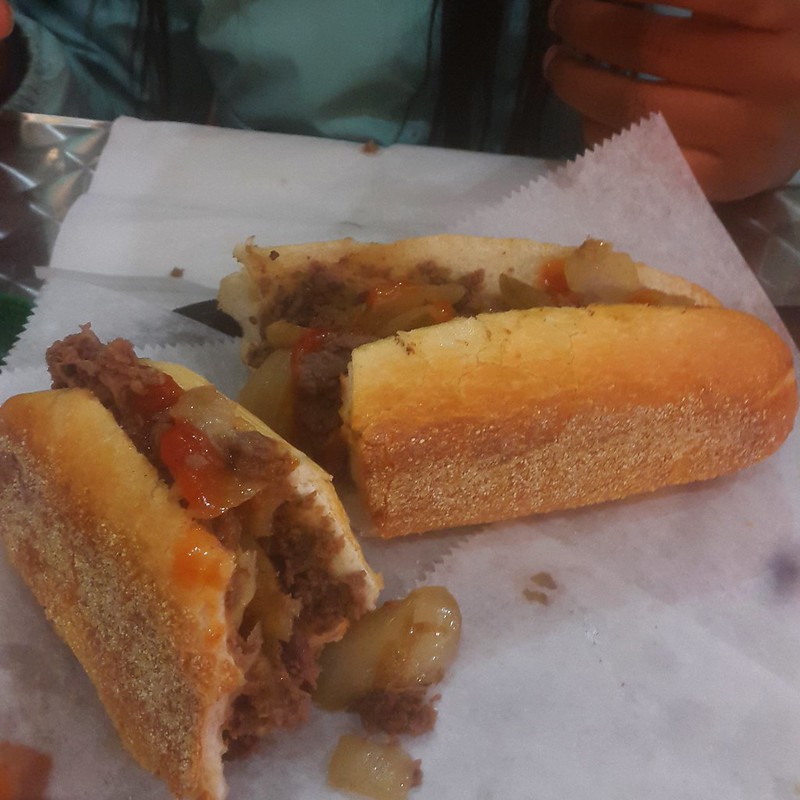 And that was the end of the first day.

For breakfast on Day two, I had a Philly cheese steak omelette at our hotel, The Wyndham in the heart of the Historic district which was the redemption, albeit it ‘just redeemed’. 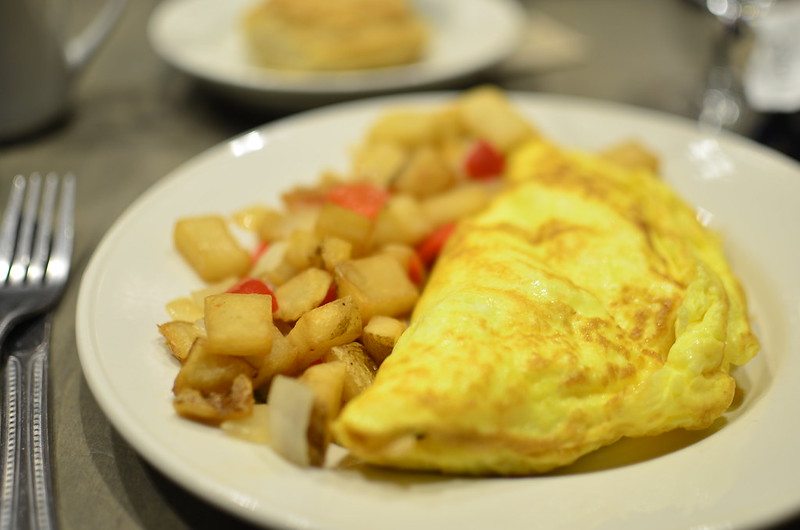 The eggs were seasoned and fluffy, enclosing creamy cheese, sliced steak and sweet onions. I enjoyed it with ketchup, a side of skillet potatoes and a biscuit (scone to ye oh Brits). 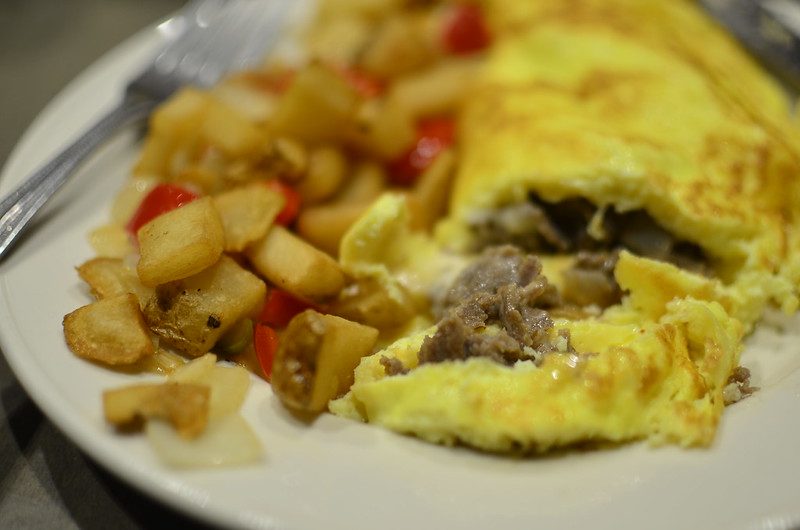 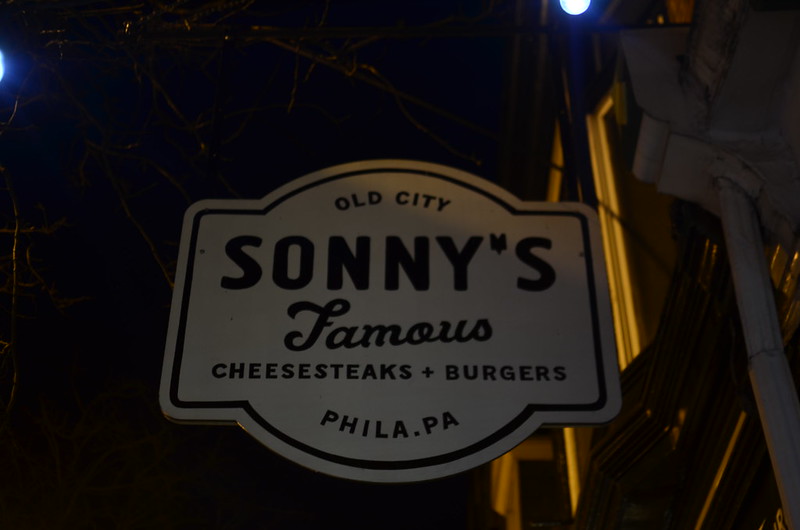 And in the end I narrowed it down to one – Sonny’s. 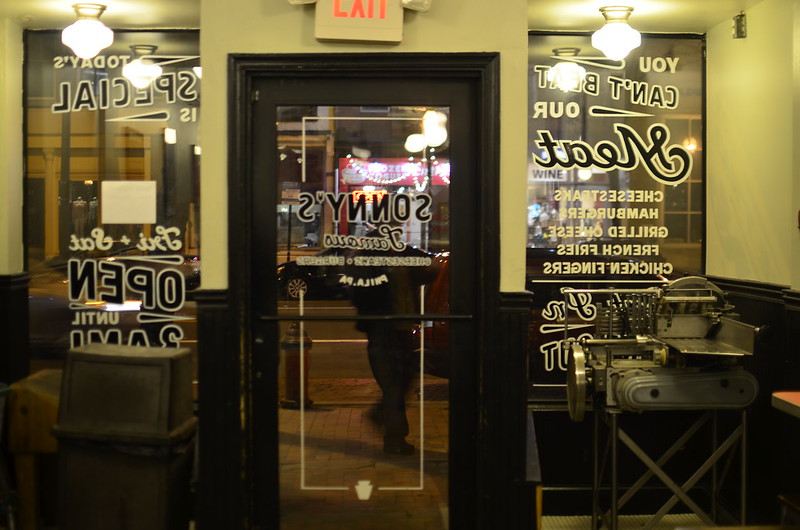 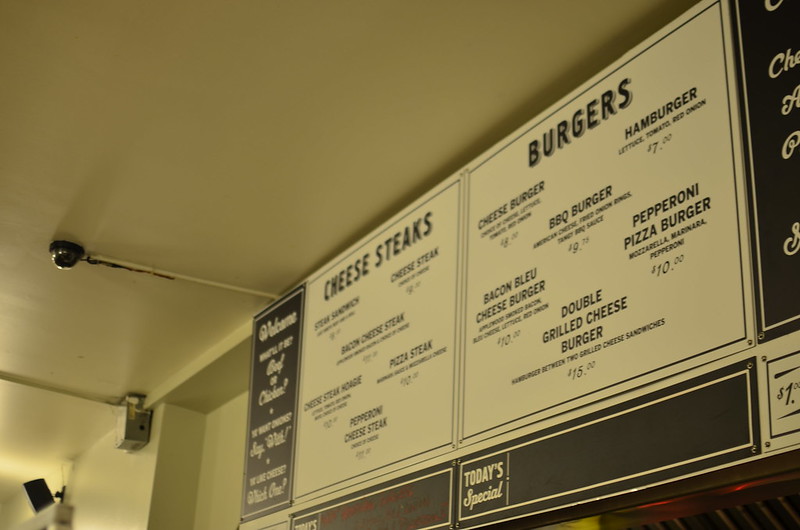 Barely redeemed to properly redeemed, the cheese steak at Sonny’s was seasoned, even if lightly. On the recommendation of Ed Levine, I went with cheese whiz. And Jalapenos, now that I’d learnt you had options to add in your sarnie. 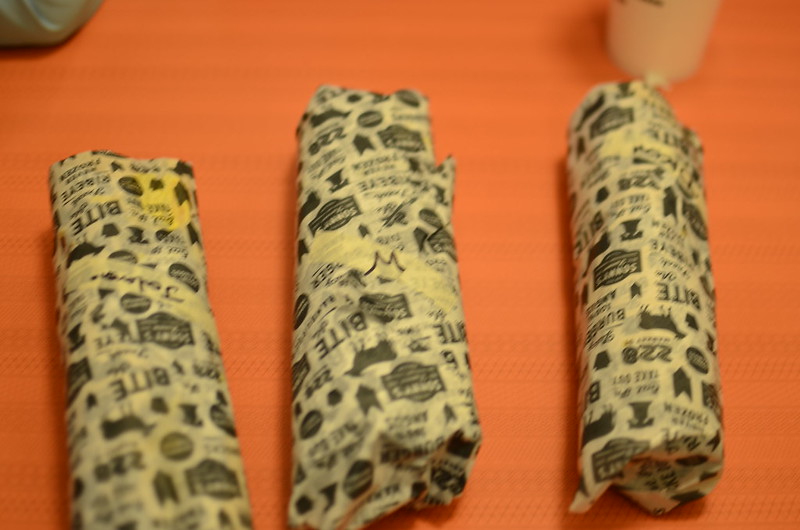 …that Cheez Whiz is the best cheese option for a steak, thanks to its “salty tang” and ability to “envelop each piece of meat in a layer of fatty flavor.”; Serious Eats 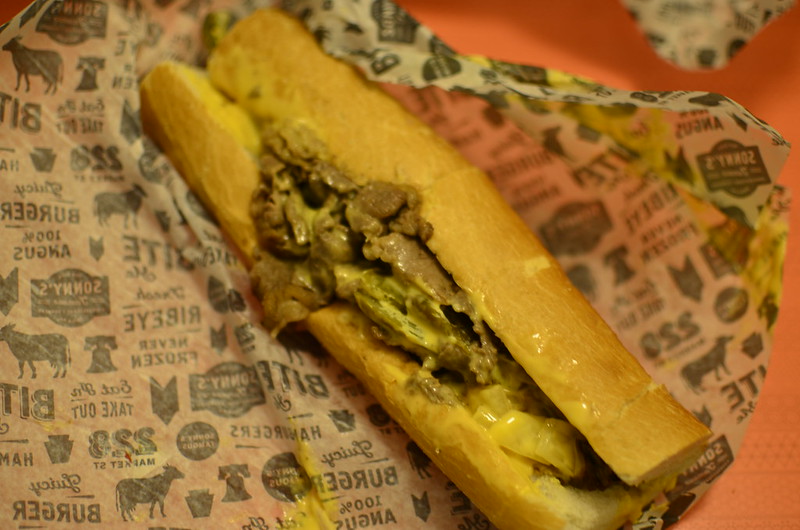 Now I’m not sure if condiments are a standard for cheese steaks but we made ketchup mandatory. One daughter had a bacon cheese steak which stunned her into eating almost nothing but the roll. It was too much for her. 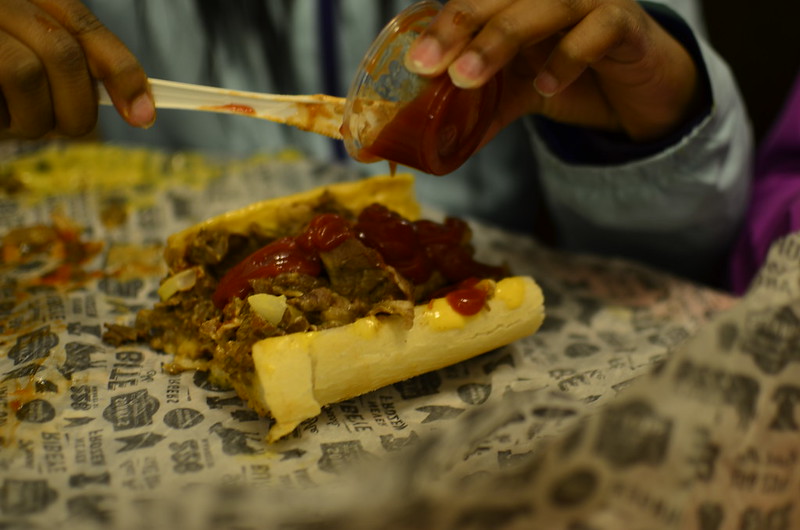 I enjoyed mine with the fiery, fresh flavoured Jalapenos. 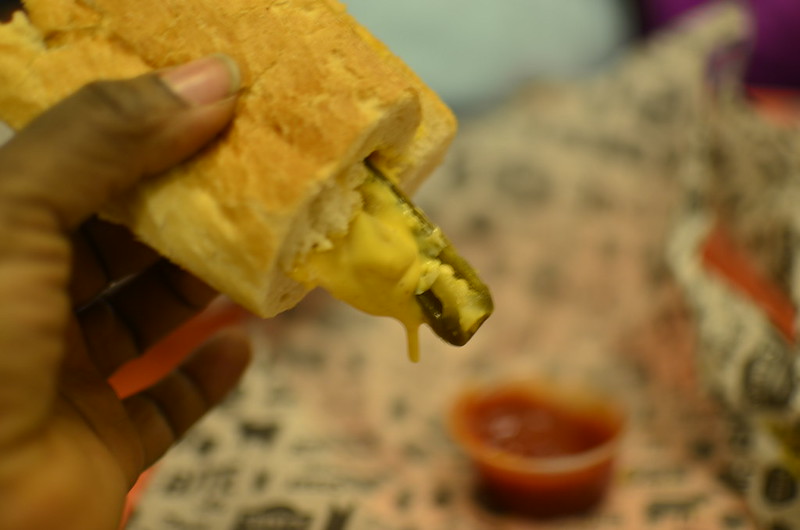 In spite of liking it, I couldn’t finish the roll.

I fall into the ‘American food trap’ time and time again. I forget I’m in a country that serves up humongous portions and consistently over order food. Next time I go to Philly, we’ll be sharing rolls for sure.

Of the two experiences, Sonny’s was the winner for me.

There were other experiences we didn’t avail ourselves of though. Like street Philly cheese steaks. 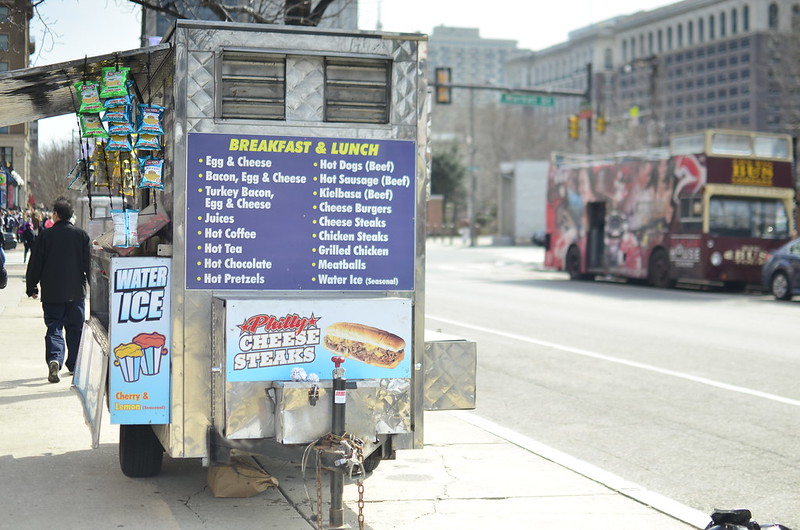 Or the Cheese steak pretzel. 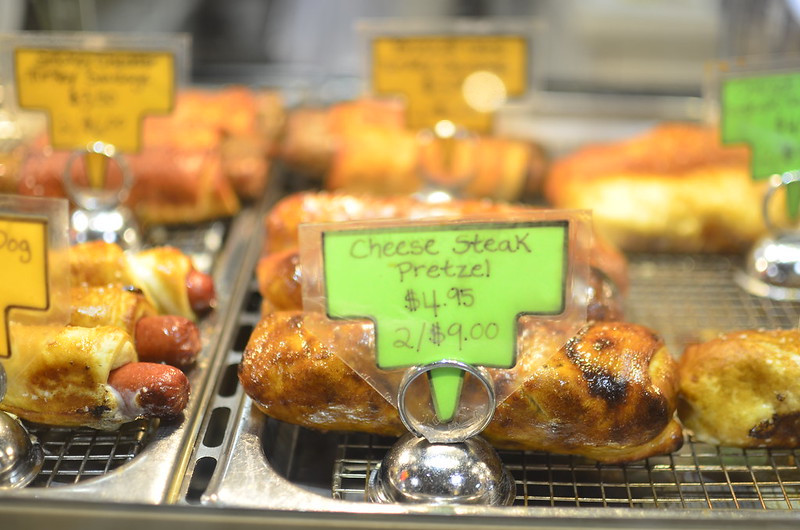 It was a great experience but I must confess I now have steak fatigue. In my mind, steak is always revered – and to see it commonplace as it is in Philly left me cold.

No more meat for a while, except maybe suya :).

Peace and love, fam. Tell me, have you had mind-blowing or numbing Philly cheese steak experiences? Do share.