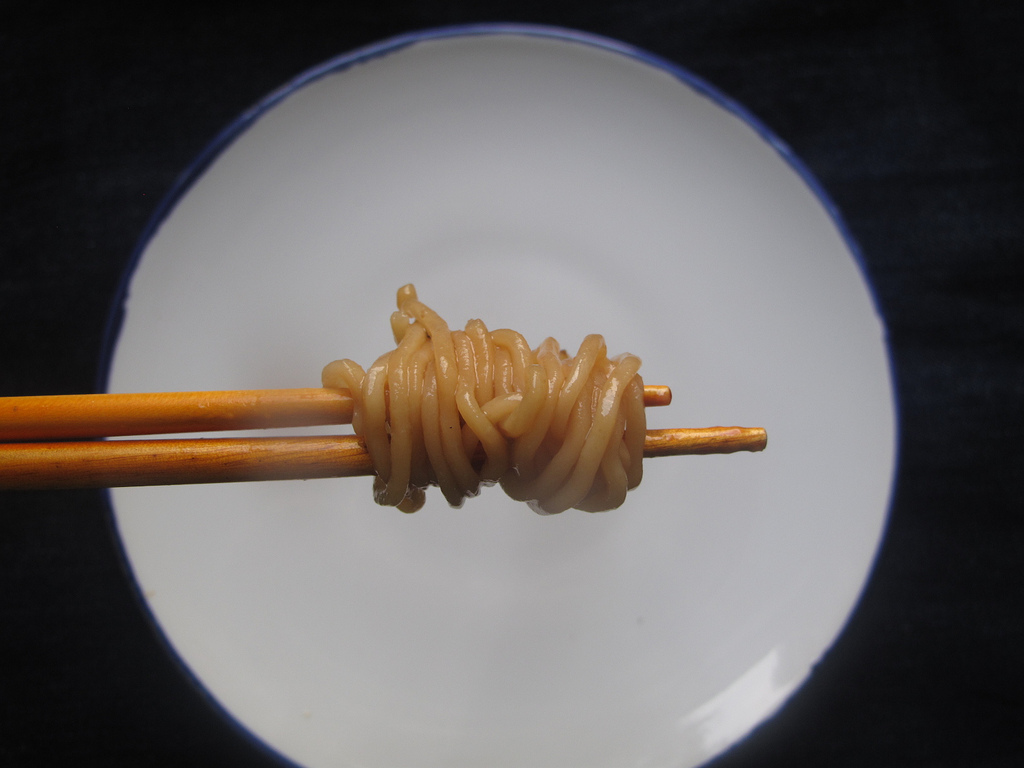 verb ˈchäp
chopped chop·ping
1
a :  to cut into or sever usually by repeated blows of a sharp instrument
b :  to cut into pieces —often used with up <chop up an onion>
c :  to weed and thin out (young cotton)
d :  to cut as if by chopping <chop prices> <a bridge chops the lake in two>
2
:  to strike (as a ball) with a short quick downward stroke
3
:  to subject to the action of a chopper <chop a beam of light>
intransitive verb
1
:  to make a quick stroke or repeated strokes with or as if with a sharp instrument (as an ax)
2
archaic :  to move or act suddenly or violently

A food lover. Could be a glutton, or greedy person :). According to Phrases, ‘one of the many other meanings of the word chop is … ‘to take into the chops’ (the jaws/cheeks/mouth).’

Could also mean ‘Be quick; hurry up’, derived from a pidgin version in the South China Sea. Its interesting how seafaring has changed culture, cuisine and language.

The adoption of the chop-chop pronunciation was influenced by the long-standing use of ‘chop’ and ‘chop-up’ by English seamen, with the meaning ‘quick’ or ‘hurried’. This usage dates back to at least the 16th century, when it was commonly used in the strange expression – ‘chopping-up the whiners’. This referred to gabbling through prayers in order to get them finished quickly; for example, from Philip Stubbes’ The anatomie of abuses, 1583:

Which maketh them [Reading ministers] to gallop it over as fast as they can, and to chop it up with all possible expedition, though none understand them; Phrases

A name coined by seafarers to describe the nimbleness of the Chinese, eating deftly without forks. Or something like that. I’m still distilling this one, and yes, it’s perfectly fine to serve it half done. You’re very welcome. 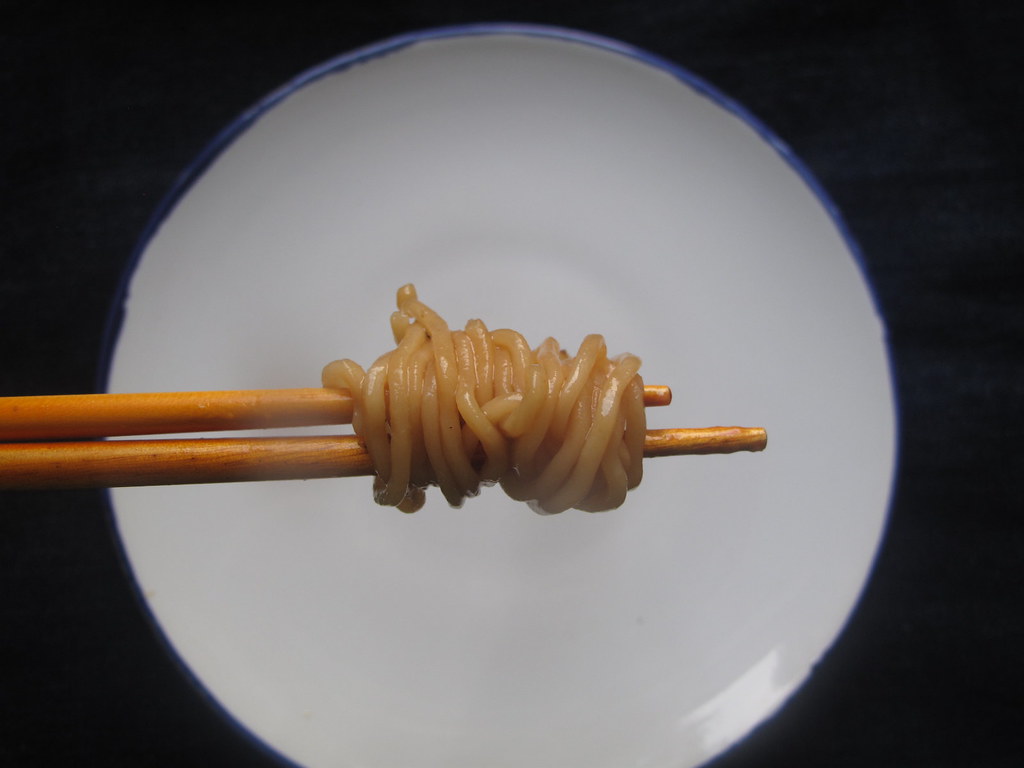 Hors d’oeuvres. Starters. Canapes. To begin with. Nigerian small chops are a thing. Everything from Puff-Puff to Snails, Gizzards, Devilled Eggs and so on – small bites that are flavour and texture bombs. I love the way they’re described in Ian McCall’s book, Sweet Pass Kerosene:

‘…finger chop’ or ‘small chop’ was provided for a fairly large gathering and only the older ladies had chairs to sit on. The majority stood and conversed in informally well-dressed groups which would change their composition in the course of the evening as guests circulated assisted often by introductions, where necessary, from their hosts or willing others. The food consisted of goodies like anchovies on toast, devilled eggs and various canapés which were available in sufficient quantity to make dinner later a matter of choice rather than necessity.’ 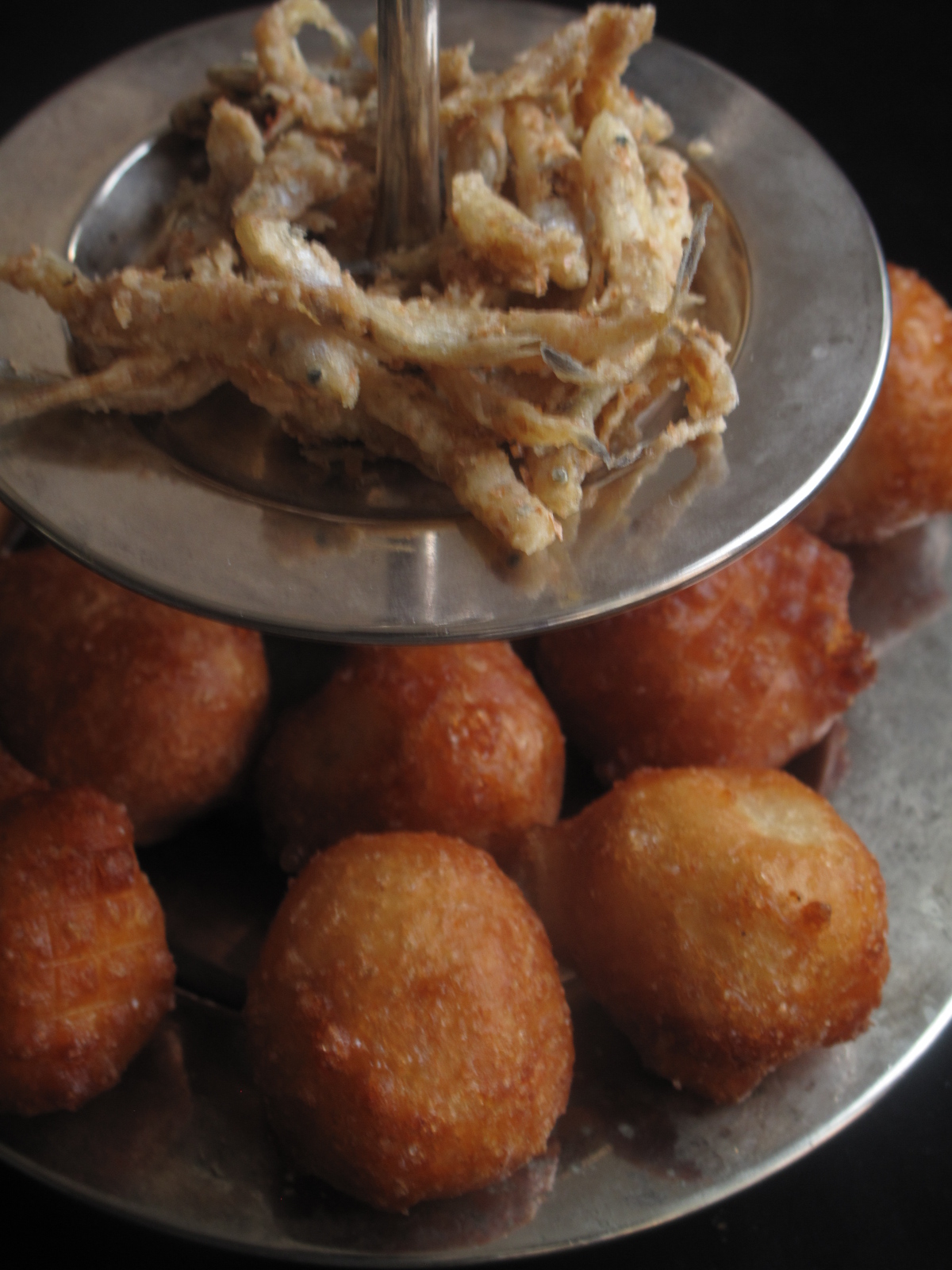 An informal gathering…best described below:

‘Nor was dinner to be confused with knee chop which in terms of intake of calories closely approximated that of the dinner party with cold meats, salads, home made crisps and other relatively substantial fare available at a buffet table.

A knee chop gathering was a highly informal affair where guests might be invited to remove their jackets and ties and were seated sometimes in the most unusual ways like sitting on a pouffe made in traditional Oyo leatherwork based on traditional prayer mat designs of the kind on which it was customary for the faithful to kneel upon when bowing in prayer in the direction of Mecca.’

A classic West African stew of groundnuts, served on rice and topped with a variety of cooked and raw fruits, vegetables, herbs and sauces. 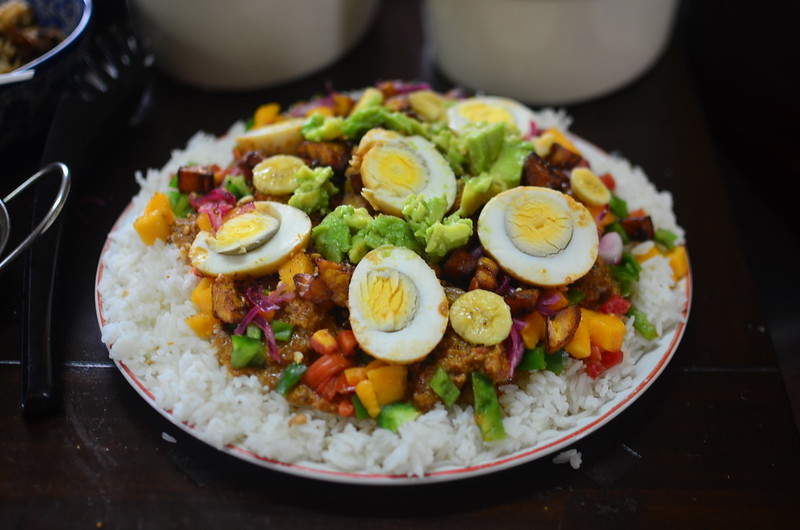 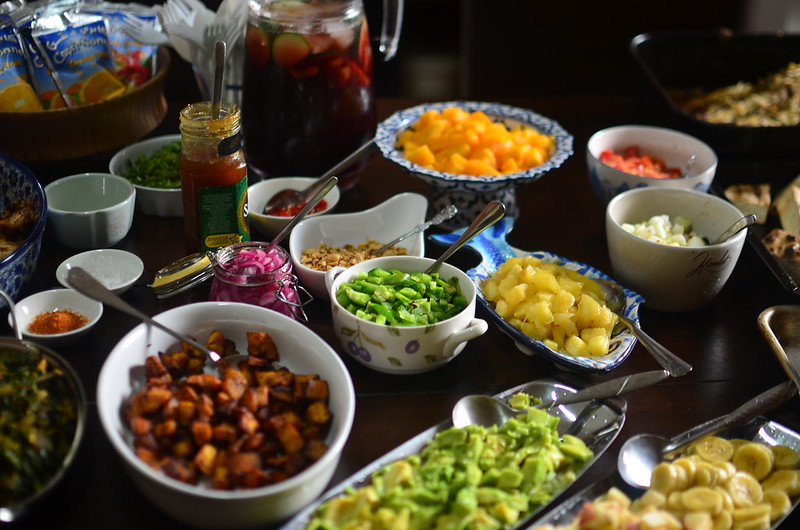 Like Groundnut Chop but with a palm-oil based sauce, often made for big dinners and family celebrations.

…chophouse is a restaurant that specializes in beef steaks and other individual portions of meat, known as chops. Usually, these steaks are made to order and are served with side dishes such as baked potatoes and rolls. Most steakhouses also offer other cuts of meat such as roast prime rib, veal, and often seafood.

Chophouses started in London in the 1690s, and served individual portions of meat, known as chops.[1] The traditional nature of the food served was zealously maintained through the later 19th century despite the new cooking styles from the Continent which were beginning to become fashionable. The houses were normally only open for men; Wikipedia

Described in Mallam Sile, a short story by Mohammed Naseehu Ali (The New Yorker, April 2005) as a  large wooden box with the top used as a table of sorts.

“An enormous wooden “chop box,” the top of which he used as a serving table, covered most of the space in the shop. “

I can imagine this being a box of many utilities, from prepping, to storage and serving.

Do you know any other food-related Chop words? Share, please. Thank you.