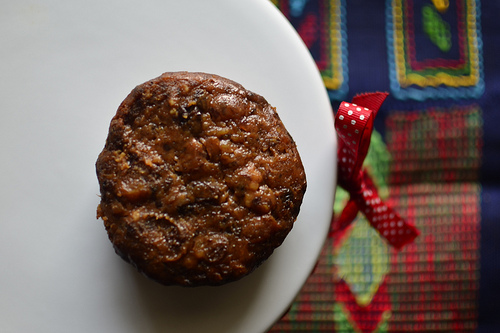 For a while, I’d been thinking about doing more with Zobo (Hibiscus drink), malt drinks and ginger beer so when I decided to make a fruit cake for Maryam who is Muslim and doesn’t take alcohol, I knew I’d found the perfect opportunity.

I use a combination of drinks for Zobo for depth of flavour and ‘spice’ – both of which alcohol does.

Maryam’s sister (who she was going to share the cakes with) is allergic to eggs – Chia seeds to the rescue. The perfect opportunity to try them and their gelatinous quality.

Can I say the cakes were a tremendous success? Dense, rich fruitcake, chock-full of  sweet, fruity flavour and fragrant with the warm & festive spices of Christmas – vanilla, cinnamon, ginger.

Here are a few tips for success

I would advice freezing for up to three months, or refrigerating for no longer than a week considering there isn’t any alcohol for ‘preservation’ 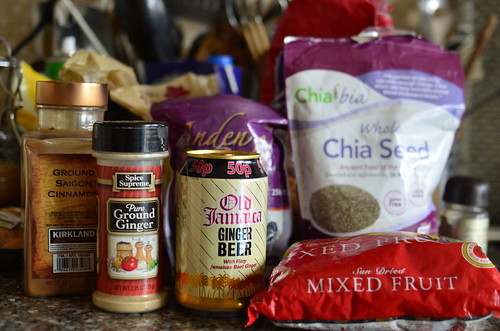 This fine array of ingredients will produce cake with a nice, soft and cohesive texture, thanks to a portion of finely chopped brandied fruit. It is everything you want in a fruitcake and most of all, eating it the day after won’t knocked you out with brandied scents or unable to appreciate the fineness that is fruit cake. 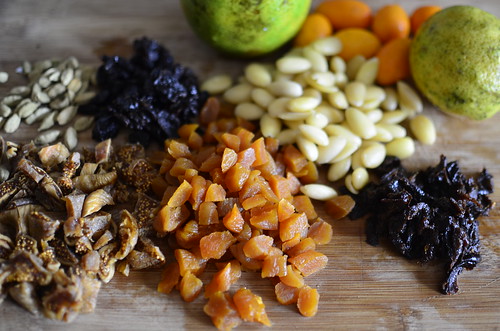 Combine the Zobo/ malt and ginger beer, 2 tablespoons of sugar and spices in a jar. Stir well and leave to soak for half an hour. 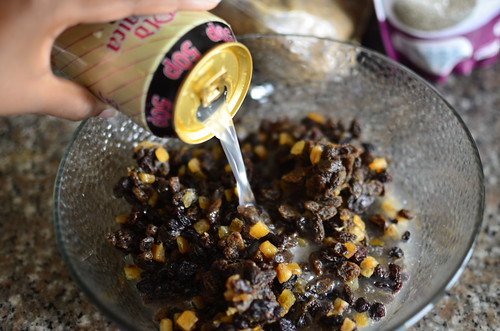 The fruit will plump up a bit. 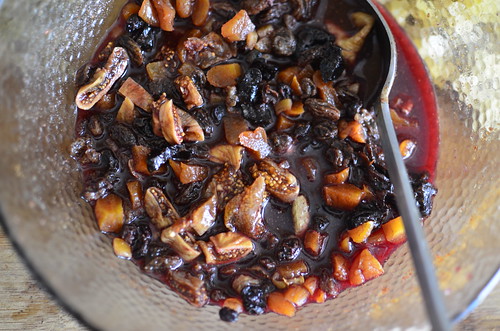 When ready, divide the fruit into two equal portions.

In a food processor, blitz one portion till the fruit is minced and the texture is a thick fruit paste, reminiscent of mincemeat. This fruit puree will bind the cake and infuse it with true fruit flavour.

In a large pan, combine the fruit paste, the other half of the soaked dried fruit, cherries, apricots, mission figs, sugar, butter, zests and juice of the lemon and orange and all of the liquid from the soak. 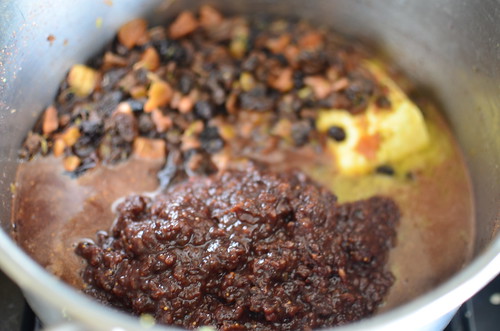 Slowly bring to the boil, stirring until the butter has melted, about 10 minutes.  Reduce the heat and let simmer for another 10 minutes, stirring occasionally.

For the egg-free version, soak chia seeds in room-temperature water, stirring after a few minutes so seeds don’t clump up. 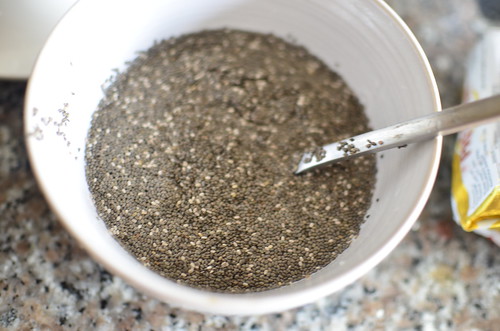 Blend, once gelatinized – after about 10 minutes. 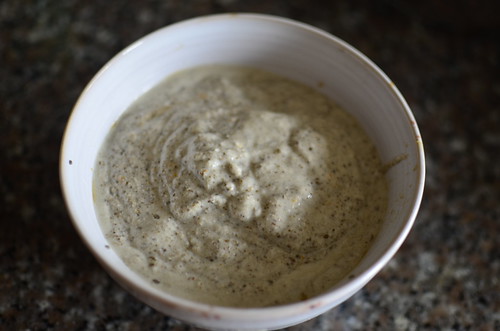 Pre-heat the oven to 150C/Gas 2/Fan 130C and prepare your cake tins – two (2) 8″ or 9″ tins with greaseproof or parchment paper, greasing before and after laying the paper at the bottom of the tins; or grease and flour mini-bundt or cupcake tins.

When the mixture has cooled down, add the eggs/chia seeds and ground almonds – mix well.  Sift the flour, baking powder and spices into the pan.  Stir in gently, until there are no traces of flour left. 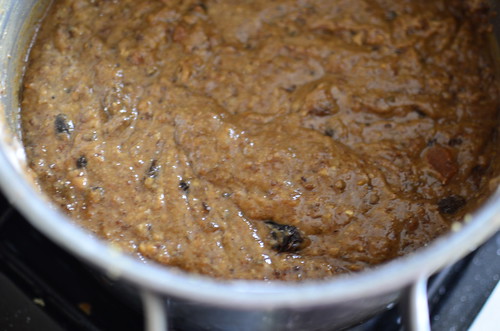 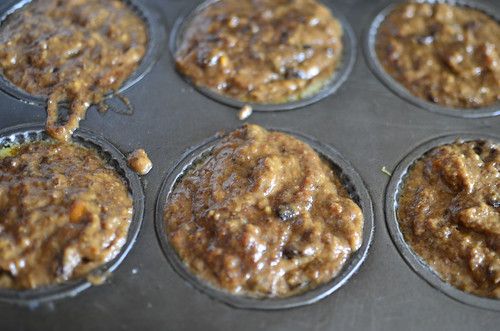 Place in the centre of the oven and bake for 45 minutes. Then turn the heat down to 140C/Gas 1/Fan 120C and cook for a further 1 hour for the mini-bundt tins, and up to 1 and 1/2 hours (or up to 1 ¾ hours if you are using gas) until the cake is dark golden in appearance and firm to the touch. Cover the top of the cake with foil if they start to darken considerably.

To check the cake is ready, insert a fine skewer or a small knife into the centre – if it comes out ‘dry’ – without cake batter clinging to it, the cake is cooked.

Allow the cakes cool in the tins. When cold, remove from tin, peel off the lining paper. Wrap in aluminium foil and refrigerate or freeze. 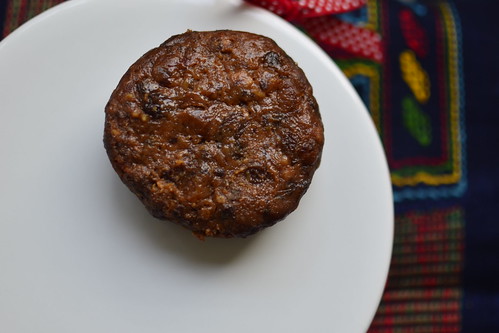 The resulting cake is lighter in colour than the ‘brandied’ versions… 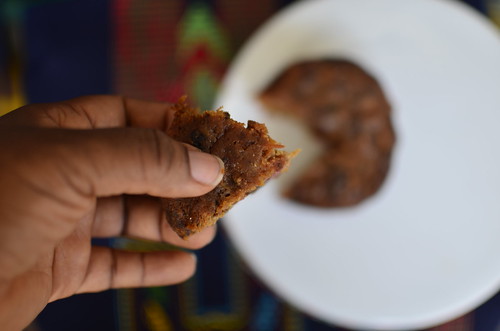 …but no less delicious, and fruity. 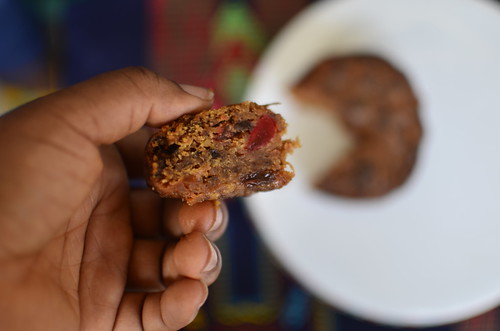 Have you tried alcohol-free fruitcakes before?