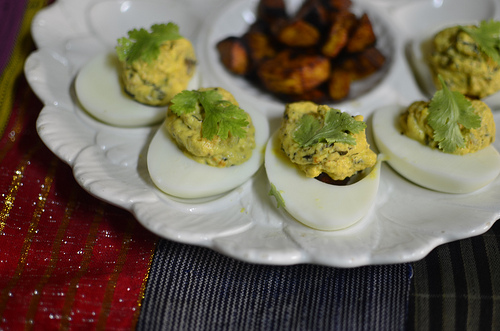 These are a few of my favourite things: Wings and Inspirational recipes. Like the one I share today. Egusi Devilled Eggs.

Wings, The print in-flight Magazine published quarterly by Arik Air Nigeria. One good thing they do for the country and Africa in general.

I have family collect them for me.

What they do for me? They have a knack for  digging up treasures and sharing them with me, particularly around Africans pushing the boat out culi-wise.

That’s how I got to ‘meet’ Zina Saro Wiwa and her ‘New West African Kitchen Project’ in the feature ‘Edible Identities’, from February 2013.

Inspired by her family garden in Nigeria, Zina has used this as a jumping-off point to explore West African foodways and the implications of its reinvention.

“I am obsessed with food – all food – and I have always suspected that food could play a big part in telling new stories about Africa. Not only telling stories to the outside world but to other Africans.

Because even among West African countries, it seems that there is very little sharing of culinary ideas, particularly between Francophone and Anglophone cuisines. And when it comes to the outside world, there is no doubt that West African cuisine is one of the least experienced and least understood on the planet.

This is a shame because West African food is amazing and I feel like a powerful exchange occurs when you eat another culture’s food. West Africa misses out on this exchange. So my pop-up feasts act as major rewiring sessions that engage the heart, the mind and the belly.”

Its why I want to publish a magazine. To tell our stories.

To get us to know who we are…and where we’re coming from.

To understand our cuisine. For ourselves.

And to find the words and build the vocabulary we need to do so.

When I read the menu for Zina’s feast, I am weak-kneed. The creativity, the recipes, the presentation. They totally wow me.

The first thing I bookmark is the ‘Egusi Devilled Eggs’.

Deviled eggs (US) or devilled eggs (UK) or eggs mimosa are hard-boiled eggs, shelled, cut in half, and filled with the hard-boiled egg’s yolk mixed with other ingredients such as mayonnaise and mustard, but many other variants exist internationally.

They are served as a side dish, appetizer or a main course, and are a common holiday or party food; Source – Wikipedia

For one, the entire recipe was, is ingenious…and two, I’d never had Egusi anyway else but in ‘soup’.

The term “deviled”, in reference to food, was in use in the 18th century, with the first known print reference appearing in 1786.

In the 19th century, it came to be used most often with spicy or zesty food, including eggs prepared with mustard, pepper or other ingredients stuffed in the yolk cavity.

In some parts of the Southern and Midwestern United States, the terms “stuffed eggs”, “salad eggs” or “dressed eggs” are used, particularly when the dish is served in connection with a church function—presumably to avoid dignifying the word “deviled”, in reference to “The Devil”; Source – Wikipedia

This is what I’m aspiring to – developing creative dishes that recreate familiar flavours and textures in new, admirable ways in My New Nigerian Kitchen. And find uses for my devilled egg plate. Specially created and purchased, via a jumble sale for this very purpose! 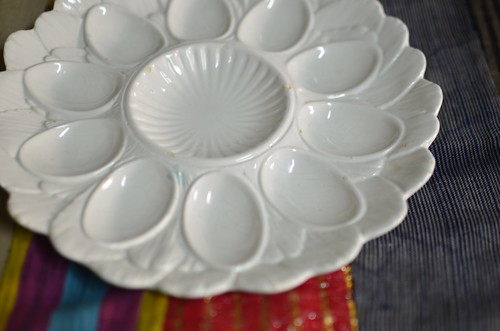 My comments are in green. 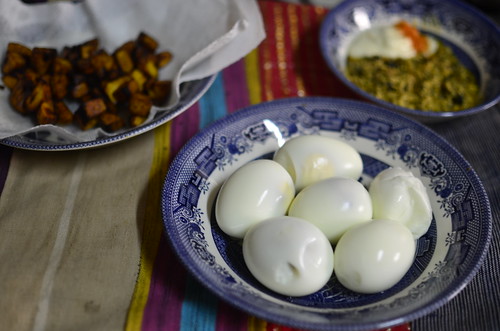 Quick disclaimer: there are no precise measurements here, so for now, indulge me and enjoy some loose estimations; Zina

Hard boil 10 medium-sized hens eggs. 10-15 minutes should do it. Once done, set them aside to cool completely.

How to Hard Boil an Egg

There are many ways
On the stove. In the oven
The aim not for green-grey yolks
But for perfect yellow, unhaloed ones

Personally, I like to set my eggs in a pot, with cold water covering them by at least an inch. Then I turn on the heat, to medium. Once they come to the boil, I cook for 7/8 minutes after which I strain the hot water out, run them under the cold tap, decanting the water 2 or 3 times.

Once the ‘heat’ is taken off, I leave them to cool down, still soaked in cold water before I gently crack the shells and peel.

Dice and fry plantains if using.

Set aside once ready.

If you have ready made Egusi soup, move on to the next step ‘Egusi Devilled Eggs’.

Your eggs should be completely cold before you attempt to remove the shell, which should then come off quickly and cleanly.

Cut the cold, hard-boiled eggs in half. 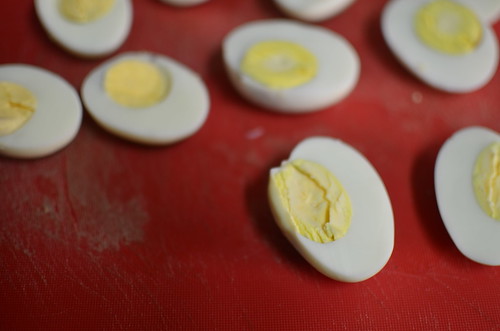 Scoop out the yolk with a spoon and place the hard yolks in a bowl. 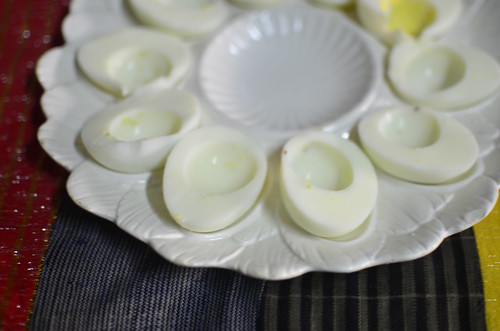 If adding plantains, put them in the hollows of the boiled egg whites. 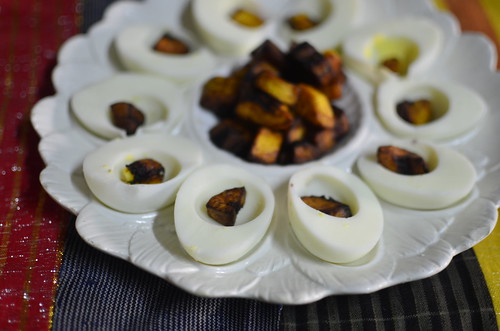 Most devilled egg recipes call for mustard. Not in this case. The egusi soup packs enough of a punch.

If you are boiling 10 eggs, add two heaped tablespoons of egusi soup, and one tablespoon of mayonnaise (or an amount according to your own palette).

Sprinkle a few flakes of dry chilli pepper and then mix thoroughly. The mixture should have some stiffness.

After mixing, scoop the egg yolk and egusi mixture into a piping bag to be squeezed back into the waiting egg whites. You can also use spoons to do this.

I also have a little secret. Sometimes I embed a small piece of fried plantain in each egg. (I did this as you well know – totally awesome!)

It gives an extra bit of sweetness that is like a lovely surprise. The egg is already intensely savoury.

If you are feeling really fancy, you could tempura some sort of shell fish and have that emerging out of the yolk like the doomed Titantic. Serve with ice cold beer or a soursweet cocktail.

Y’all know I’m a slave to cilantro. But I forgot to put it on in the first round of photos – it added a whole other dimension to the taste – really delicious!

And yes, I took her advice to serve with a sour- sweet cocktail…..

I served up ice-cold Zobo punch. Sour. Sweet. On ice and perfect for this dish!

This year, I hope to do more video…..and this thing I put together up here…isn’t it but it is a step….so I hope you enjoyed the pho-vid voiceover thingie!

Plus I think this would work beautifully with guacamole as well! And I’m going to try it ASA!!