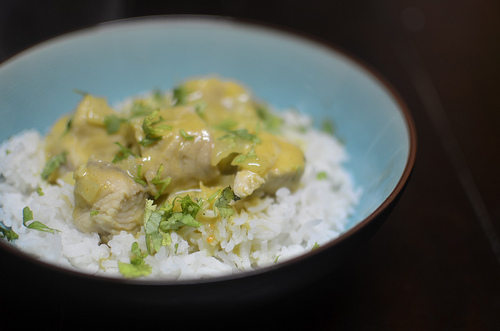 I post this, long overdue……from Sunderland, in the northeast of England where I’m putting my feet up, enjoying single-digit temperatures and reveling in the stunning views of the North sea.

To say I brought back evidence of my trip to Songhai Farms would be right. Evidence in photos, and in food.

I brought back a few bottles of fruit juice, some fish  – both Tilapia and Catfish and some fresh sweetcorn.

On the farm, there is a huge pond with thousands of fish. And a wonderful viewing hut with holes in the floorboards through which you can feed the fish and watch them jump. 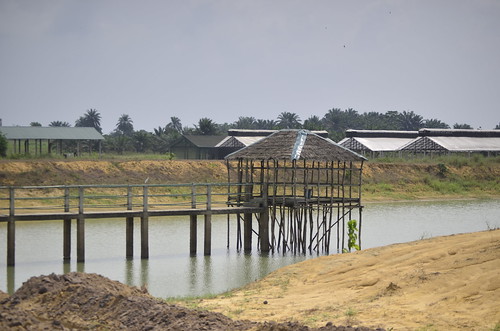 You walk up a picturesque foot bridge. 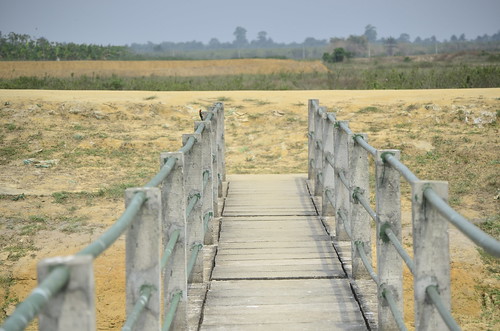 You even stop to take photos, to immortalize the moment. 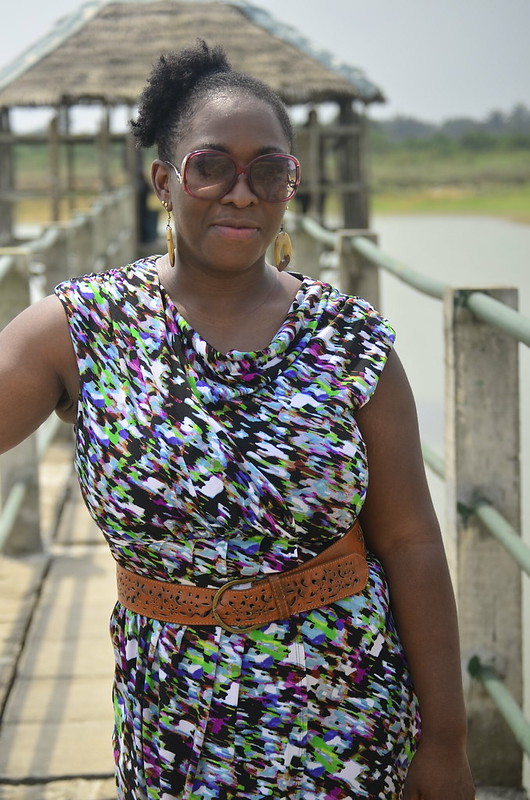 You also admire the design of the fish pond with its sloping sides. Knowing what this means. That run-off water, rich with nutrients from the fields on the high ground flow down these slopes, enriching the waters for the fish therein. 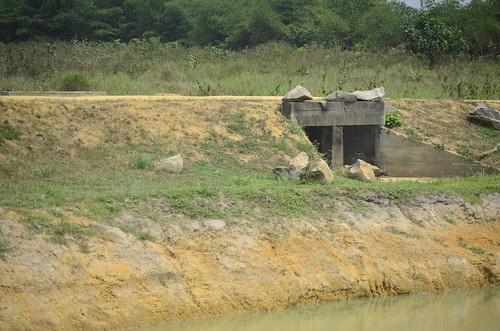 And then you listen to the ‘tour guide’ as he talks about the fish and the pond….in my slightly wacky video :-).

I was exhausted when we got home that day but could hardly wait to cook the Tilapia. We had it two ways – dipped in seasoned flour and fried; and made into Pepper Soup. The catfish I left for a week, after cleaning. The cleaning….sapped what little energy reserve I had. Urghh.

Once I was over the cleaning, I could focus on preparing and filleting the fish in readiness for the next steps.

I wanted to make a sauce that used some of the ginger juice I brought back.

Days later, (on Twitter), I came across a recipe by Adrian Miller – ‘Curried Catfish’, which led me to Design Sponge where  the full recipe and history was featured.

Why Adrian loves this recipe

I love this recipe because it showcases the global aspects of soul food, and it was completely unexpected. I found this recipe in The New York World’s Fair Cookbook by Crosby Gaige (1939), and the author described it as “a favorite of the Negroes.”

Imagine to find this Asian-style dish being embraced by African Americans during the Great Depression. That’s the kind of culinary gem that makes hours of bleary-eyed research worth it. Though it employs a French technique for making the sauce, it’s an easy recipe to make that uses a soul food standard like catfish and melds it with Asian spicing to make something truly delicious; Design Sponge 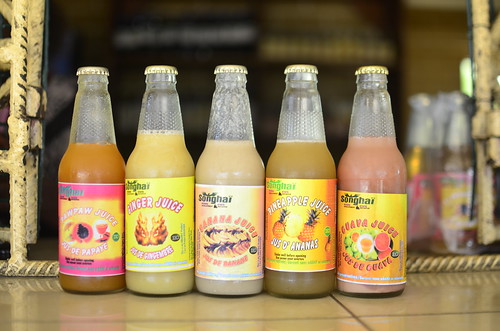 He makes a beautiful looking curry which I’ve decided to adapt.

I’ve adapted this recipe by using ginger juice rather than water. I reduced the amount of onions I used and finished with chopped cilantro rather than parsley. (My changes are highlighted in green) 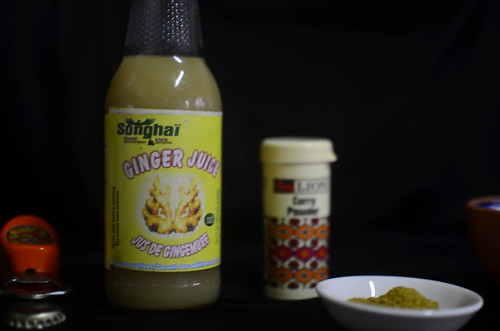 Place the catfish pieces in a medium saucepan. Add the ginger juice, onions, salt, and pepper. 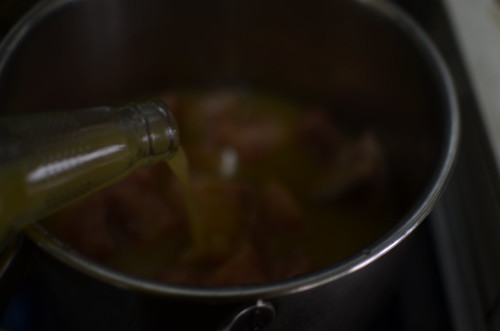 Bring to a boil, reduce the heat, and simmer until the fish is tender, but not falling apart, about 8 minutes. With a slotted spoon, transfer the fish to a serving platter and cover with foil to keep it warm. Boil the cooking liquid until it reduces to 1 cup, then keep it warm over low heat. 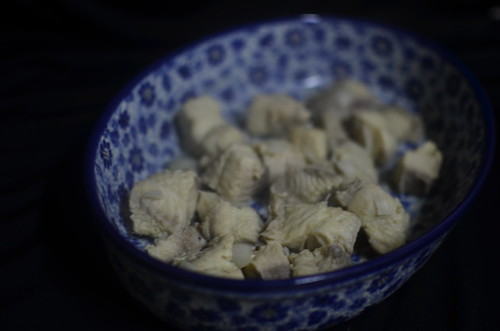 Combine the flour, curry, and butter in a small bowl. Mix with a fork or fingertips to form a smooth paste. Roll teaspoon-size bits of the paste into balls. 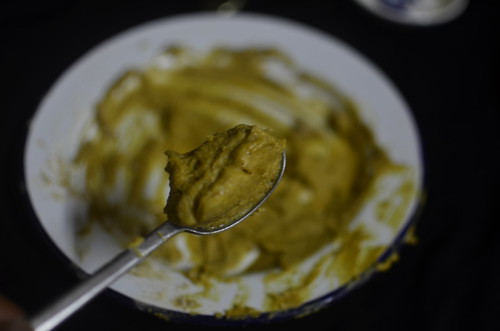 Return the cooking liquid to a simmer. While stirring slowly and continuously, drop the balls into the liquid one at a time, letting each one dissolve before adding the next. Cook until the sauce returns just to a boil and thickens to the consistency of gravy, about 5 minutes. Check and adjust the seasoning, to taste. 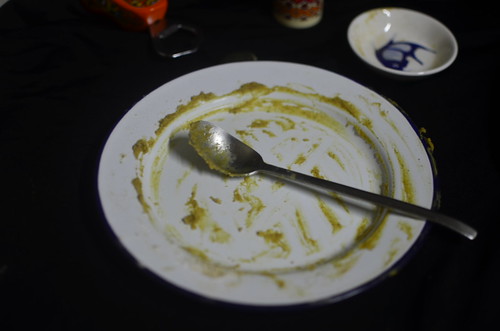 Pour the gravy over the fish.

Serve with boiled rice and chopped cilantro. Serve hot. With a cold beer. Or glass of water. However you like. 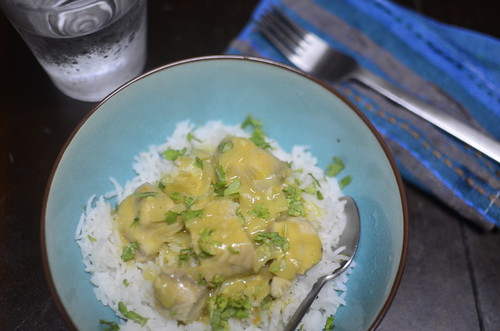 On the second day if you have some left, even after three young ‘uns demand it in lunch boxes, then enjoy it some more with yeasted corn bread from a friend. 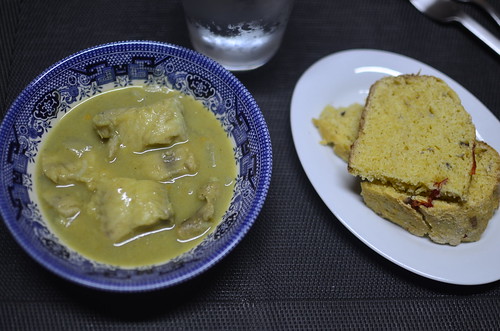 This is a winner of a recipe.

Let me put it this way – my son, a sworn fish hater, had 3 pieces of the tender catfish (mistaking it for chicken :-)) before we said to him ‘You just ate fish’. After which he continued.

The flavours are excellent – smooth and creamy, rich with a ‘coconut milk’ flavour even though it never features. The ginger gave it a nice, warm heat which wasn’t overpowering to my surprise, especially as I’d drunk some of the juice at the farm – it had a healthy kick!

Most of all, it was easy to make, used my catfish in a novel way and hardly took time – perfect for a weeknight, any fish and even for fish-haters.

Definitely a recipe I will repeat. With fish, with prawns, with chicken even. 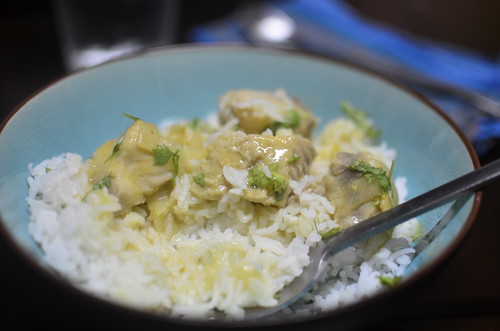