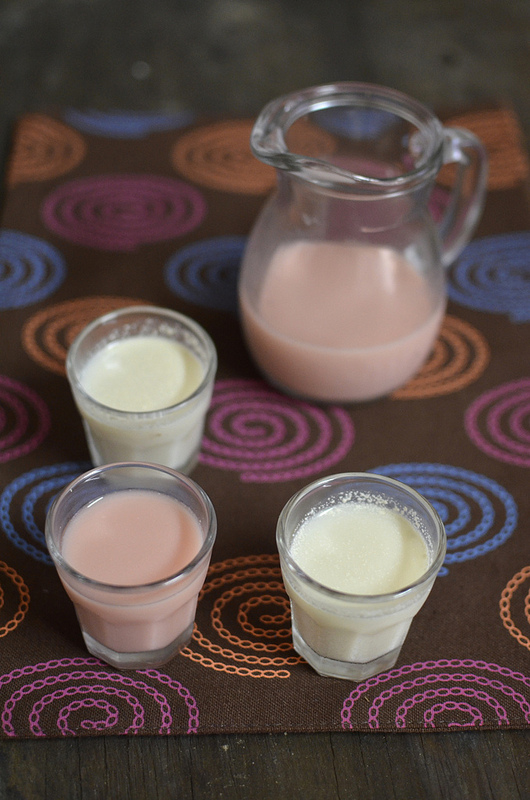 Northerners in Nigeria are famous for many things, culinary-wise: they are tray-bearers of dates, kolanuts and alligator pepper; suya merchants of everything from meat kebabs to jerky-style beef kilishi and pounded, shredded Dambu Nama as well as wonderful drink makers. Sometimes I wonder what the repertoire of Nigerian drinks would be like without our North. Take Zobo, a red drink from dried hibiscus calyxes. That’s a northern legacy, as well as Kunnu, milky drinks from cereal, grains and nuts.

One of my friends laughed. “Shoko, don’t you know anything? That’s not Bournvita (a brand of chocolate drink) – that’s kunu.” “Kunu?” I said, overcome with curiosity. “What is that? I don’t think I’ve seen that before.”My friend was surprised.

“Haven’t you been up north before?” I shook my head; this was my first time of crossing the Niger. “Ah, then that explains it. Kunu isn’t widely sold in the South – it’s more popular up here.” I was further intrigued. “I think I’ll get a bottle and find out what it tastes like.”

So I walked over to the nearest vendor and asked for a cup – I didn’t want to buy too much, in case it wasn’t to my taste. So the vendor poured it out, I lifted the cup to my mouth and…

…and I found that that the single act of allowing this milky brown essence into my universe had changed it unalterably for ever.

The petty day-to-day frustrations no longer felt important; I felt that I had sloughed them off like a snake sheds its skin. Time stood still as I recalibrated my senses to account for this new indescribably wonderful sensation that I was experiencing.

Typically, Northern women fill bottles with various types of Kunnu, a milky drink, made with millet, sorghum or tiger nuts; balance them on their heads in huge, silver basins or plastic buckets and hawk. They stop to serve wanting customers in cups, stainless and plastic for mere cash tokens.

Unfortunately, I’ve never been a customer or client even though I know them well – I am not a big fan of street drinks, which aren’t freshly made before my eyes. 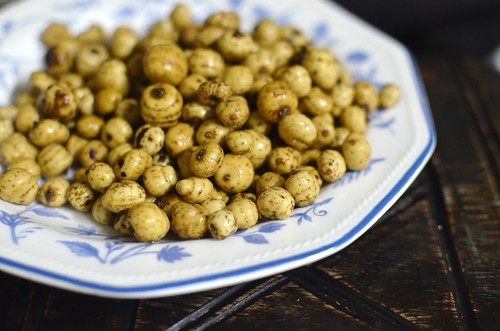 But I am a fan of street ingredients, especially when they are ingredients I love. Northern men can be seen in November and December pushing wheelbarrows full of tiger nuts – fresh, dried, baked, sold by the ‘tin’-ful – tins of evaporated milk are emptied with their tops discarded and are used as measuring cups. These mobile stalls are my market place – they serve me well for pineapples, watermelons and ….tiger nuts.

But I’ve made some of these drinks, and my firm favourite is Kunnu aya, tiger nut milk; made from the same nuts, chufas as the Spanish Horchata de chufas.

Just as Kunnu refers to milky cream drinks made from cereals (millet, sorghum, rice, groundnuts), so does Horchata mean the milky extract from any vegetable source, such as hazelnuts, almonds, barley or rice. In Nigeria, other (common) varieties of Kunnu are Kunnu gyada made from rice/groundnuts (Peanuts) and Kunnu zaki, made from millet.

Scientifically, Cyperus esculentus var. sativus, tiger nut belongs to the plant family Cyperaceae. It is commonly known as the tiger nut, earth almond, chufa, yellow nut sedge or Zulu nuts. To be honest, the tiger nuts aren’t really nuts but are sedges, tubers, grown in soil named after the tiger because their skins sport tan and black speckles.

It is an emergent grass-like plant found to be a cosmopolitan perennial crop, of the same genus as the papyrus plant that is common in seasonally flooded wetlands. This plant was originally native to the Mediterranean region but its cultivation has now spread to many warm countries and has become naturalized in Ghana, Nigeria and Sierra Leone. It is usually sown in April and picked in November.

The nuts are under-utilized due to lack of information on their nutritional potentials.

Tiger nuts are big on flavor when eaten. Coconut flavor to be exact, just with more crunch, a crunch which is on the scale of the water chestnut, if meatier and less watery. They are generally smaller than hazelnuts, being between half a centimetre to a centimetre and a half in diameter with a tan exterior and a bright creamy interior.

Its interesting that though the nuts taste like coconuts when eaten out of hand, the flavor of the milk extract bears no resemblance to this. Instead, the tiger nut drinks, cream-coloured with a sweet- and slightly sour taste, tend towards nut milks, like almond milk yet are altogether refreshing and best drunk fresh, within 24 – 48 hours. If left for days, they transform and ferment a bit into a kefir-yogurt drink which I don’t find pleasant. 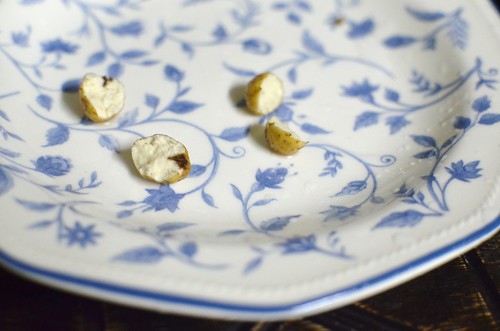 In Nigeria, they are widely eaten by adults and children. You’ll find them fresh (and raw), roasted, baked and sun-dried. I am partial to the fresh variety which like I’ve said makes a refreshing alternative to dairy-free milk and can be used as a flavoring agent for ice cream and biscuits.

Of course, due to the vastness of this country and its multitude of inhabitants, tiger nuts go by different names depending on where you are on the compass.

But it isn’t only liquid pleasures that are to be had – puddings and candy are up for grabs too! According to The Guardian of Nigeria, the Hausas make a sweetmeat by grinding the fresh tubers, straining off the sappy liquid and boiling with wheat flour and sugar. It is stirred constantly, to prevent lumping and cooking is continued till the required sticky pap-like consistency is reached. This is ‘tiger-nut milk’ or in Ghana ‘atadwe milk.’ It is eaten immediately as fermentation sets in quickly rendering the preparation unfit to eat. In the Keta area of Ghana, the sun-dried tubers are ground to a fine powder to which sugar can be added to be stored till required. Roasted tubers may be similarly ground to a powder known in Vhe (Awlan) as fie-dzowe.

I was excited to find the fresh tiger nuts after months of looking out for them, and was determined to make the most of them!

The tiger nuts, fresh or dried are best soaked in water for at least 6 hours prior to making the drink, to ‘soften’, but also to reduce the level of unwanted anti- nutrients such as tannins, alkaloids and polyphenols.

Wash thoroughly in water and remove any stones/twigs and other non-tiger nut things.

Soak overnight, ensuring the nuts are covered with an inch or two of water. The following day, discard soaking liquid, rinse and prepare to blend. 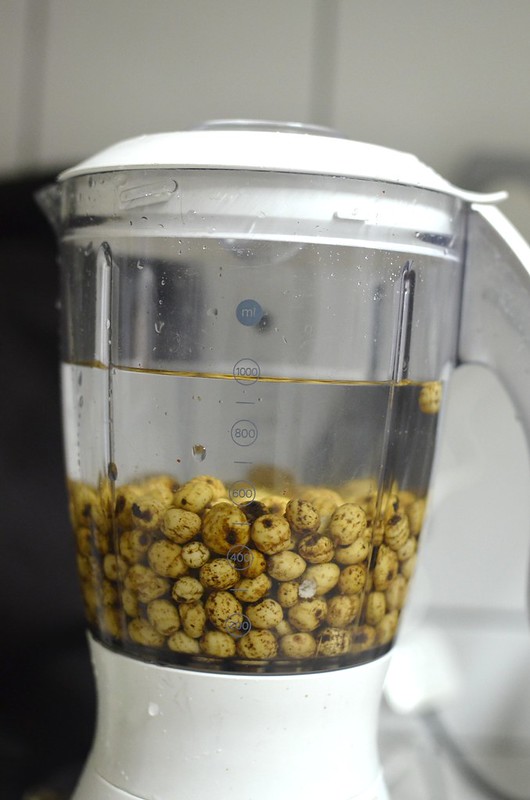 ….one blends repeatedly till a slurry forms and froths. 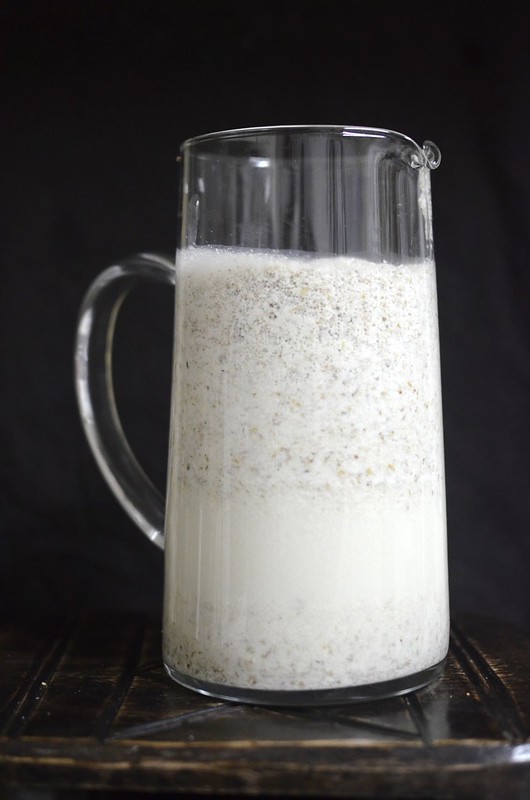 The extras – the flavourings follow and are blended again.  Though the milk on its own is wonderful, I want to experiment a bit more.

I divided my batch of nuts into three: one part was combined with dried hibiscus calyxes – I hoped it would take on a some of the rich red colours and a slight tartness. Alas, and probably due to the fact that this was a previously-used batch of dried hibiscus flowers, the colour didn’t come through though a slight tartness did. The resulting drink ended up like a lightly, slightly sour strawberry yogurt drink; batch two combined the nuts with cardamoms and the third batch, was spiced with alligator pepper (cousins to grain of paradise).

Pass the mixture through a number of sieves, each with finer holes than the last – I used 3 sieves. You could also use cheese cloth or muslin to facilitate maximum liquid extraction. I discarded some of the ‘chaff’, though I had plans to incorporate it into a cake or even some churro dough, but that will come later. 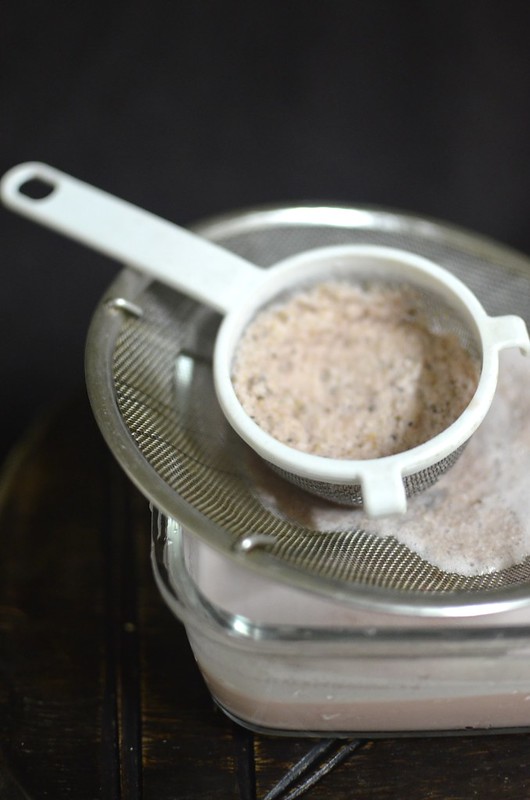 I like the filtrate to stand, refrigerated for an hour or two, so as to allow the starch fraction settle out.

Once this is done, I decant the top liquid, discard the starch and sweeten to taste, with sugar, honey, or simple syrup.

This is refrigerated and best drunk within a day, two at the most, otherwise the result is quite sour!

When it is made commercially, the content is heated to just below boiling point, about 70°C with spices like dandelion, alligator pepper, ginger and licorice with some sugar to taste. 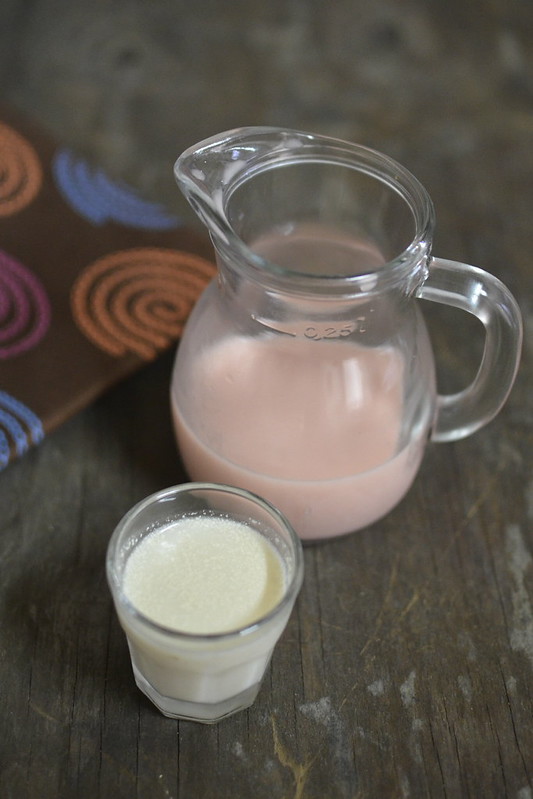 I liked the flavours – especially the pink, hibiscus flavoured variety which should be called Kunnu Aya Zobo, I think! After all Kunnu Aya refers to the milk and Zobo, the hibiscus flavours. It did end up like light and sweetened strawberry yogurt.

The  cardamom flavours also shone, but then I am a cardamom lover. I felt I could have done a bit more with the ‘alligator pepper’ version but that’s one for next time.

Have you tried Horchata de Chufas? What are your favourite nut milk combinations?