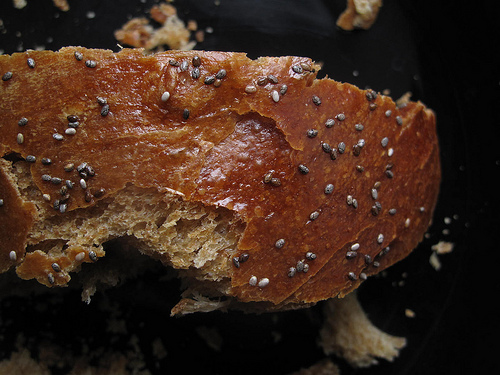 False confidence. False humility. They all point to the same thing. 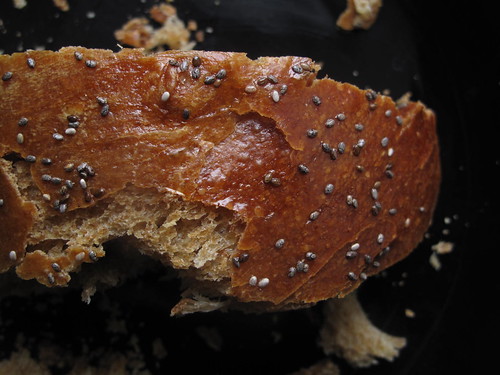 I’ve always been able to braid hair and I knew that braiding dough strands to make challah would be a walk in the park. I mean, compare unmoving bread mix with the wiggly bottoms of 7 and 5 year old girls on a sunny day. 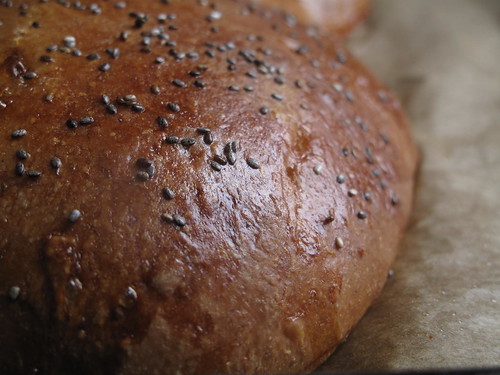 All that said and done, I began my ‘stroll’ in the park with my lazy no-knead dough. With the aid of my wonderful companion dough whisk, I was done in no time. I left the dough in the fridge for a couple of days to ‘prove’. Because I don’t like yeasty tasting breads, I used less than the amount of yeast the recipe called for. The effect – a small rise in the first stage. The second stage of proving/rising sees the dough back to ‘regular’ proportions.

The leisure continued when I kneaded the dough, straight from the fridge, cut it into 3 portions and let it rest. Even when I had to roll out three strips and placed them side by side on a baking tray, I still had it all under control. And then things came to a screeching halt. Because all my years of braiding hair amounted to nothing in the minutes that followed. I was a mess…..and so was my braided loaf. 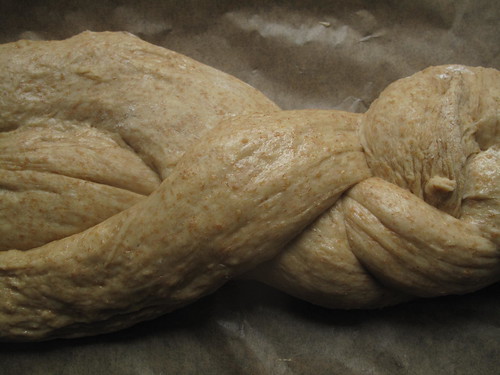 And again, this has to be one of the beautiful things about life….that we can’t predict how things will turn out, how an idea will be perceived, how that hard-shopped for gift will be liked? Especially if you have a 2nd daughter who is strong and confident and knows for sure what she wants. And it usually doesn’t include home-baked wholegrain loaves from mama.

Misshapen as the loaf was, seeded on top too, my girl (her hand in the photo below) carefully removed the seeded top crust and ate a third of the loaf…..unbelievable. Wonders shall never cease, especially as this bread, (haven been left for 2 days to prove) had a slight sourdough tang. And while that was achieved with minimal fuss, the sourdough flavours (to me and King Arthur) detract from Spelt’s true character and are best saved for other doughs and flours that complement it. Saying all this, did my daughter care about my semantics and debates? No she didn’t. She calmly ate her bread and let her mother be. 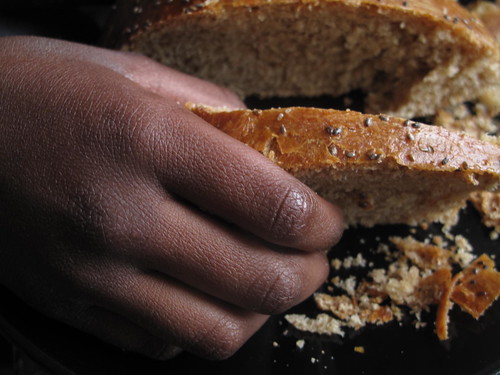 Now, the previous week when I made a similar spelt loaf, albeit studded with tiny chia seeds and dried cherries, my children, all three of them rejected it. The ones I brought forth out of my womb. Their friends, over on a play date, children of another mother devoured it……..clamoring for thick buttered slice after slice….and my husband proclaimed it the best bread I had ever made.

Who is it that can judge the future? Raise your hand and let me see you predict the outcome of the next loaf I make. I hear you say ‘That will depend on what goes in’. And you, ladies and gentlemen are so right…..we’ll just wait and see what happens.

Overall, I really like spelt – it has a sweet, mild nuttiness that is reminiscent of wheat without the associated heft. The two loaves I’ve made have come out light and soft, with great crumb and spring. I feel as though I need to try pancakes and waffles to see another side. The important thing is I feel like quite the accomplished baker – venturing further than my wheat basket, with some success. Never mind that I am no good at braiding a loaf…..in future I’ll stick to hair, at least before pretty girls say ‘No, mama your hairstyles are outdated’…..like I did to my mom.

The recipes I share today are in honour of a packet of chia seeds, purchased in a fit of shopping fever when I was at Wholefoods in Houston, a few weeks ago. I had no CLUE what I was going to do with the seeds but I bought them anyway. 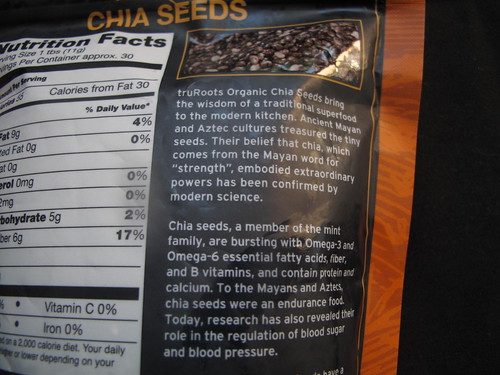 Salvia hispanica, commonly known as Chia, is a species of flowering plant in the mint family, Lamiaceae, native to central and southern Mexico and Guatemala.Folklore attests it was cultivated by the Aztec in pre-Columbian times, and was so valued that it was given as an annual tribute by the people to the rulers.It is still used in Mexico and Guatemala, with the seeds sometimes ground, while whole seed is used for nutritious drinks and as a food source.

Chia seeds are small–sized seeds, like poppy seeds but where poppy seeds are round/moon-shaped and have an almost honeycomb pattern with bluish-grey tints, chia seeds are flat – more oblong and streaked with dark shades in a range of colours from cream to brown. They are difficult to crush without some elbow grease in your mortar and pestle. The alternative? Your spice grinder, where light work can be made of it. The taste reminds me of toasted millet grains, with a nice and nutty flavour. 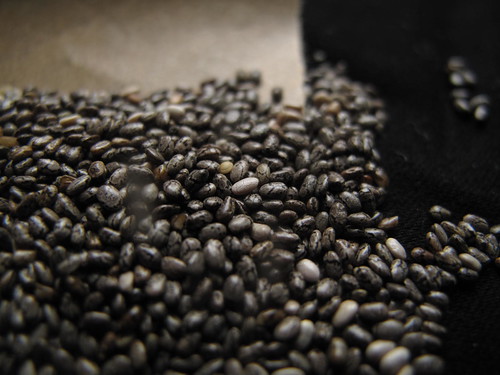 When soaked in water, chia seeds become gelatinous and are great thickeners in dips, like my chia-mint-yogurt dip. Now in bread, the mie of the loaf creates soft walls of protection around the crunchy seeds – a delight to eat with the best salted butter you have. Try it. 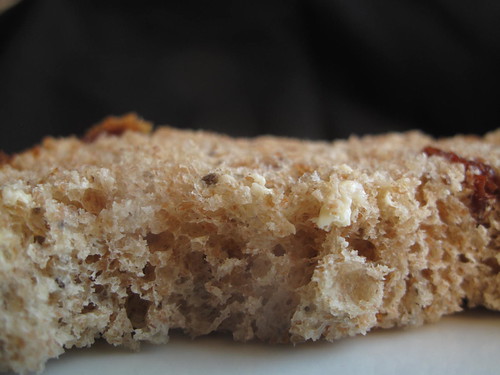 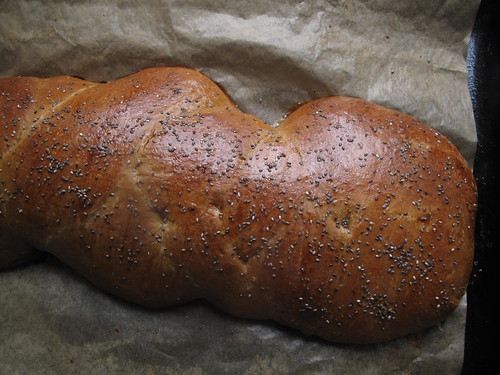 Prepare the dough – combine all the ingredients using a dough whisk and refrigerate overnight. The dough will have risen only a little but don’t worry, it will right itself on the second rise. Remove the dough from the fridge and gently knead to combine. Cover and allow the dough to rise until it’s puffy and nearly doubled in bulk, about 2 hours.

Lightly grease a baking sheet or line with parchment paper

To shape the challah

Gently deflate the dough and transfer it to a lightly greased work surface. Divide it into 3 equal pieces, shape each piece into a rough log, cover the pieces and let them rest for about 10 minutes.

Roll each piece of dough into and 18-inch rope. Place the 3 pieces of dough side by side on the prepared pan and braid them, squeezing the ends together then tucking them neatly underneath. 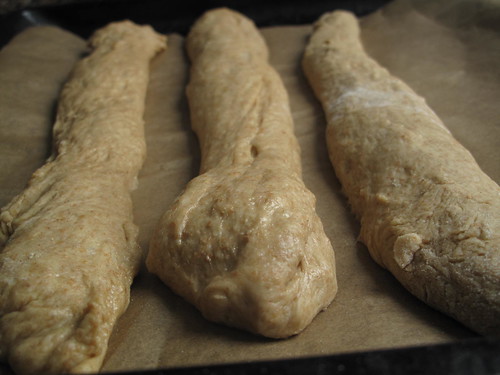 Cover the braid gently with lightly greased plastic wrap and allow to rise until it is puffy but not doubled in bulk, about an hour.

Near the end of the rise, pre-heat the oven to 175 deg C (about 375 deg F). Uncover the dough and gently egg-wash the top. To get extra colour on it, allow the first coat of egg wash to dry, for a couple of minutes and then repeat. Once done, sprinkle the chia seeds over the top. 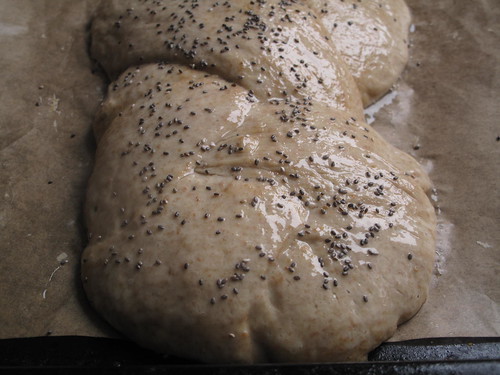 Bake the bread for 20 minutes then tent with foil (cover loosely) and bake until it is a deep, golden brown and an instant-read thermometer inserted in the center registers 88 deg C (about 190 deg F), 10 minutes more.  Remove it from the oven and after a minute or two, carefully transfer to a wire rack to cool. Allow bread to become lukewarm before cutting. 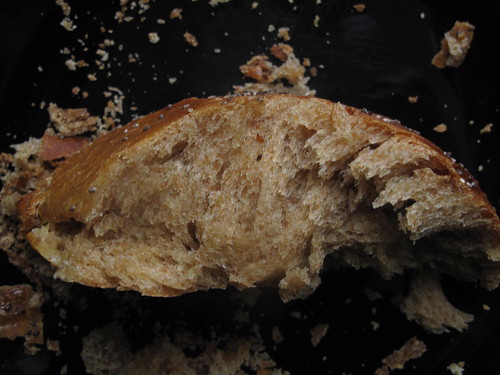 Compared with wheat, Spelt has a more fragile structure even though it is higher in protein and forms more gluten than wheat because of its water solubility – it absorbs water easily….and lets it go just as easily. In addition, the long rest that sourdough breads undergo (especially as I left it for 2 days), destroys spelt’s fragile structure, hence my low-risen, flat loaf. 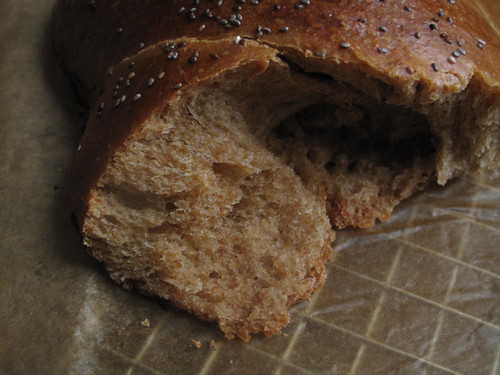 Recipe #2: Spelt-Cherry-Chia seed bread (inspired by a white loaf recipe from my friend Monet at Apples and Anecdotes)

Soak your chia seeds and dried cherries in 4 tablespoons of water and set aside for 10 minutes to plump.

In a large bowl (which has a lid, if possible), dissolve your yeast in the remaining 1 ½ cups of warm water. Because you’re using fresh yeast, you don’t have to wait for the yeast to ‘prove’ (bubble/froth).

To this yeast mixture, add the chia-cherry mixture using a dough whisk or a wooden spoon. Stir and then add the caster sugar, beaten egg, salt, oil and spelt flour.  Gradually stir in the flour, one cup at a time until the dough pulls away from the side of your bowl.  The dough is ready when it is evenly moist without any dry patches. Cover the dough with a lid or loosely with cling-film/plastic wrap and allow the mixture to rise at room temperature for a couple of hours. Then refrigerate overnight.

On baking day, prepare a clean surface and lightly grease a loaf pan, set aside. 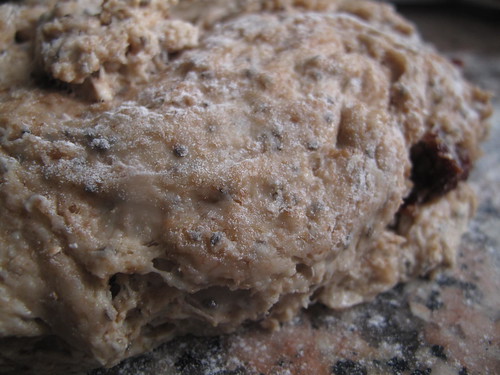 Remove the dough from the container onto your work area and gently knead together. Then gently shape the dough into a rough rectangle and prepare to make the ‘French letter fold’. Put the best side down (which will end up as the top) and begin. Bring in one of the long sides of the dough to the centre and follow with the other side. Be gentle so as not to push out all the air.  Pinch the seam closed from one end to the other – it should look like a long, weird calzone – you want to shape your dough so it fills just under half of the pan – this will give it room to rise properly. Gently turn the dough over so it is now seam-side down. 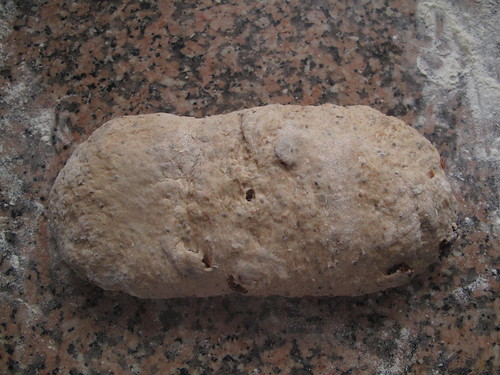 To seal the ends, using the side of your palm, press down one end to make a groove. Then fold the tapered end under the dough. Repeat at the other end. Place in the greased pan and then spray the top with some (olive) oil spray (to prevent the dough from sticking to the clingfilm) and cover with cling film. 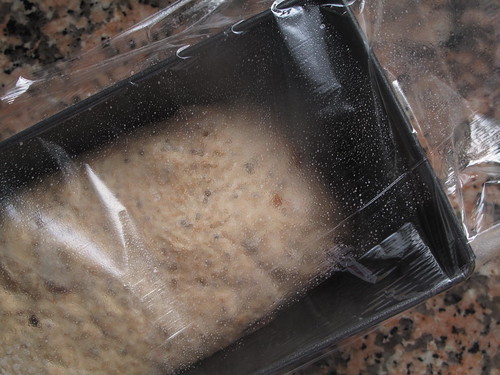 Set the dough in a warm place, like the oven (not turned on) and allow to rise till the dough fills the pan and is risen a touch above it.

Pre-heat the oven to 175 degrees C and gently place the bread in the centre. Bake for about 40 minutes or until brown and an instant thermometer reads 190 degrees). 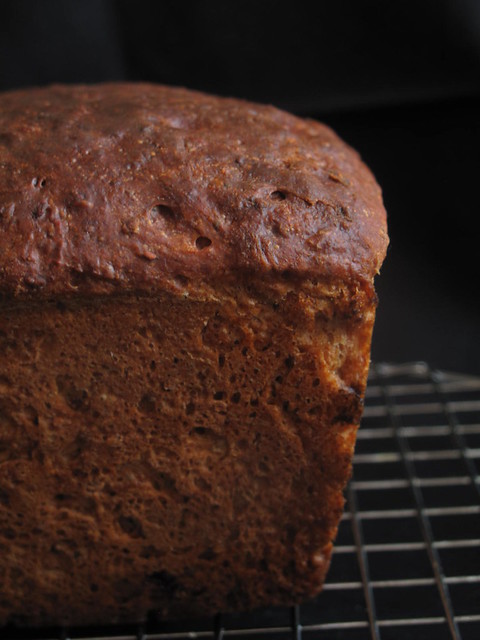 Once the top is bronzed, remove from oven and let cool for at least ten minutes on a rack. Remove from pan and check the underside – if it is wet, return to the oven placing it wet side up (top side down) and let bake dry out for another 5 minutes. 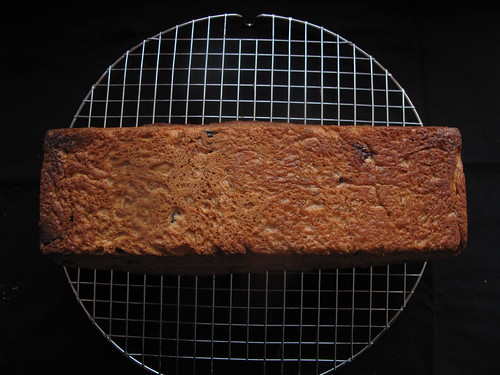 Allow cool down before serving and spreading with a delicious amount of salted butter. 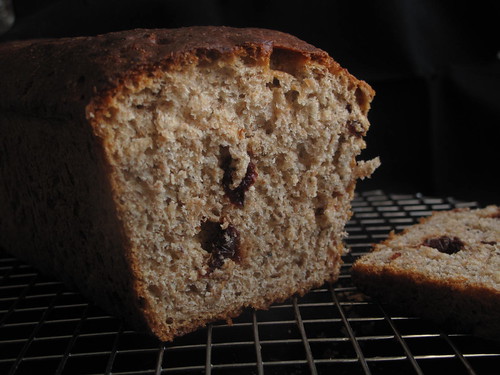 I loved both breads, though the chia-cherry loaf has a soft spot in my heart, for the sweet tartness and the crunch both ingredients bring. 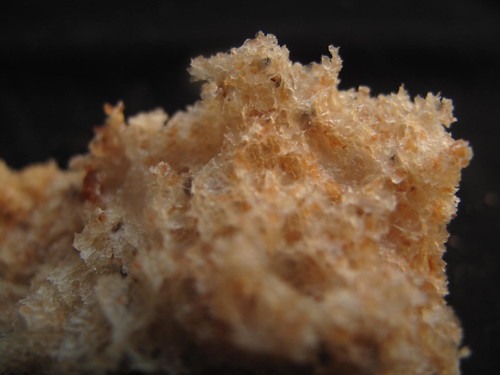