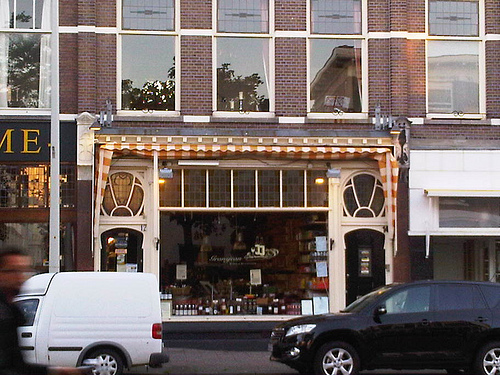 One man’s goodbye is another one’s hello. This month, my favorite things span two continents, thousands of miles apart,  but places I’ve called home, back to back. I pay tribute… to the discoveries I made in the last hours of our stay in the Netherlands and share some of the things I love about Nigeria.

The thought of a favorite street in the world had never really crossed my mind till I happened upon the quaint, gorgeousness that is the Bankastraat, in the heart of The Hague. Of course I’ve admired Paris’s Champs Elysee numerous times, enamored by the street cafes, its chairs peppered with tourists staring out on the world. I was enamored with Barcelona’s avinguda Diagonal, glistening with glass windows and lined with trees. But when I first walked down the Bankastraat, minutes from my office ( a street whose existence I was completely oblivious to) and led by M of My Kitchen Diaries, I fell in love. 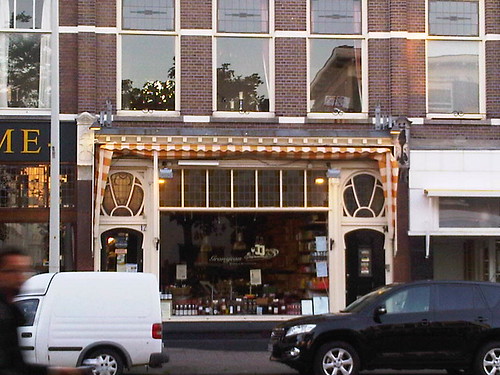 M and I had finally met in August, after 7 months of trying to organize a ‘food bloggers in the Hague’ meet up. That afternoon, we met outside my office and walked to lunch. As we approached the Bankastraat, my face began to widen at the lips with joy. A few mouthfuls later at ‘Limoncello’, a delightful one-woman run establishment with a short menu and great pasta, I basked in the sun (and then drowned in the rain) as I took it all in – the awnings over the shops, the wide street, the gorgeous cheese shops and the fruit stand, piled high with the most delicious strawberries and honey cherry tomatoes – I know, I tried them. 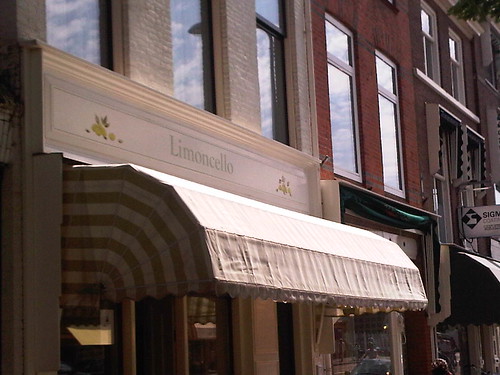 We sat outside sipping fresh mint tea while a new world opened up for me and I promised myself a return visit to properly explore the neighborhood called Archipel. When lunch was served, we enjoyed the best lemon ricotta ravioli with sage butter I’d ever had. It prompted me both to like ricotta, to try my hands at homemade ravioli and to love the street. 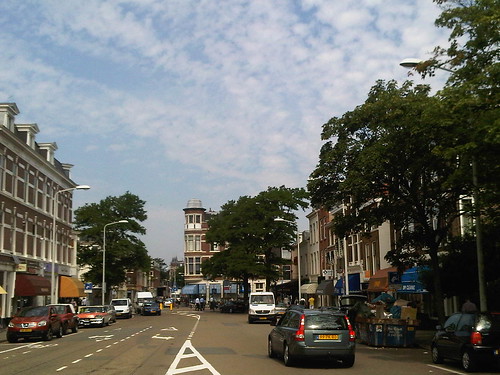 Now what’s so special about this street I hear you ask. The ambience, I must answer. Something about the space to stroll, and the shops to wander in and out off. Cafes to sip coffee in, antique shops to browse through. Furniture needs? Easily met at ‘Anna’s Home’. Great cheeses and wines and other wordily (culinary) treasures? Look no further than GransJean of Burrata fame – a delicatessen paying tribute to the refined eats of France, Italy, Switzerland, bedecked with a stripy yellow and white awning.

GranJean’s neighbors are  an organic food shop, a butcher’s and sandwich bar. Limoncello, the Italian restaurant is flanked by an antique shop, picture frame makers, an art gallery and at the top of the street by the Hotel Mozaic, a delightful design hotel where we were fortunate to spend our last days in the Hague. As a matter of coincidence. Which I don’t believe in. How possible was it that I would discover a street that I loved and then a hotel I wanted to stay in….right on the corner. But that’s the way it happened.

If the view of the bottom of the street is wonderful, take pause and walk up the hill. The land gently rises up to a point, where a roundabout is adorned with blooms and blossoms of gorgeous hues and houses curve around it, like protection. 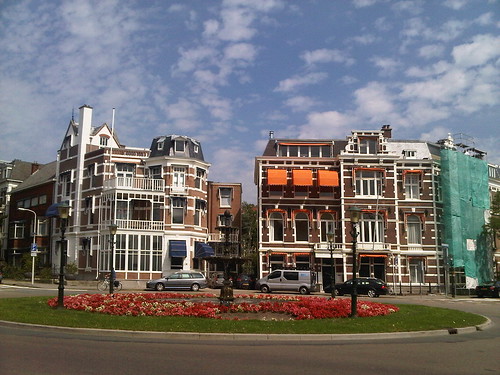 When I decided to spend 10 euros purchasing this freaky square watermelon (when round melons cost half the price), my friend E chided me for being wasteful. In response, I let her know that I wasn’t just buying a watermelon, I was buying the ‘experience’  of seeing square melons instead of rounds…..something that had no price tag. 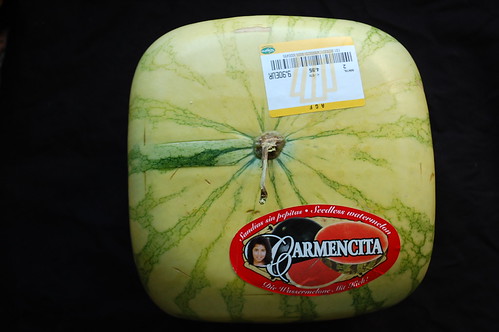 A fat, round watermelon can take up a lot of room in a refrigerator, and the usually round fruit often sits awkwardly on refrigerator shelves.

But clever Japanese farmers, as a CNN report shares, have solved this dilemma by forcing their watermelons to grow into a square shape. Farmers insert the melons into square, tempered glass cases while the fruit is still growing on the vine.

The square boxes are the exact dimensions of Japanese refrigerators, allowing full-grown watermelons to fit conveniently and precisely onto refrigerator shelves. But cubic fruit comes with a caveat: Each square watermelon costs 10,000 yen, the equivalent of about $82. 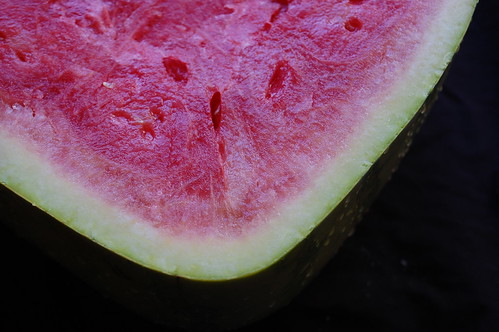 My children were intrigued by the straight edges and my son lugged it around the house, heavy as it was for a couple of days, before finally I took the melon by the stalk and cut it open. In vain hope that it would be sweeter than honey. It wasn’t, and shamefully I let E know she was right but still, it stays on the list….and I got my experience, for less than the $82 it costs in Japan – mine came from Spain!

Copper pots and pans hanging on kitchen racks, spice jars decorating rows after row of wall. But elephants made out of cups and saucers? Well, this was what we met at the zoo in Emmen, a few years ago, and it is still one of my absolute favorite things. 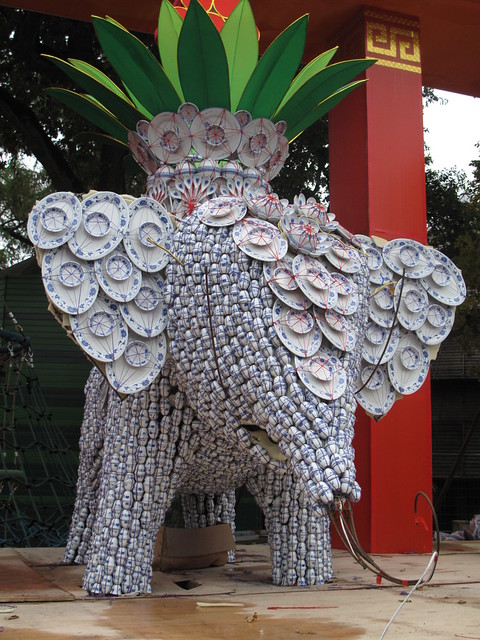 Cooking in a hotel

Once the tears were done with and our worldly belongings sealed in a moving container, we shifted base to a hotel and I set about making myself at home.

I had suitcases full of spices and food, remnants of our home fridge which included some delicious (and cooked) flank steak, hot mustard….the kind that causes a dewatering of the eyes and rocket heat to the head.

Close to us, there was a supermarket, Albert Heijn – the motherlode of Dutch supermarkets. The kids enjoyed a diet of poffertjes and strawberries, over which icing sugar ‘snow’  fell.

We enjoyed sandwiches in fresh baguettes, replete with cumin cheese and quince paste. 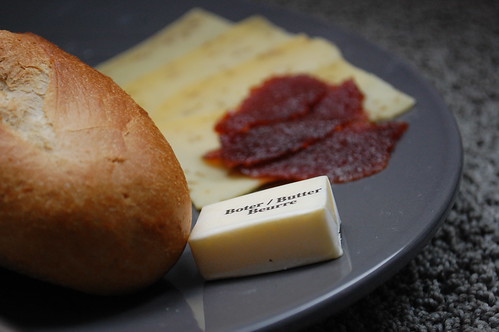 And if you think I’m weird…wanting to ‘cook’  in a hotel room, I’m not the only one. Ramki has a primer on the very subject, including recipes for French toast and melted cheese sarnies using……you guessed right, the base of a hot iron.

And finally – a piece of Nigeria.

See this fruit? It reminds of a giant pea in a dusty brown velvet pod, often smooth, sometimes with knobbly bits about 6 centimeters long and 4 centimeters across. 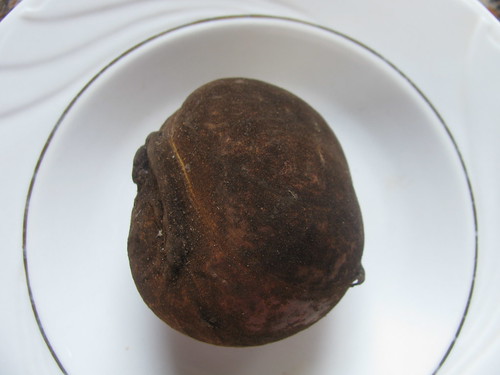 After a good scrub, it loses the softness of its skin and shows burnished shades of orange. But the best is yet to come. To get the skin off in the easiest way possible, the services of a knife are employed in creating an ‘equator’  line, preferably around the join. This makes peeling back the thin skin easy to reveal the true star of the show – bright orange fruit (or vegetable) with body smooth and shiny as polished marble. 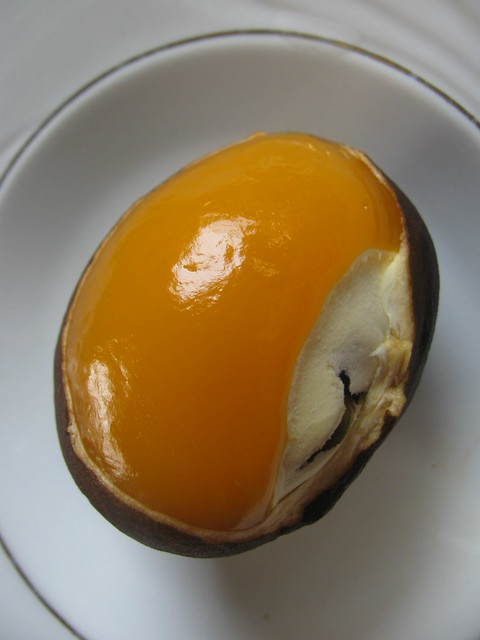 Once the ‘orange’ is revealed, it resembles a hard, somewhat oval ‘persimmon’ , with a creamy cap. 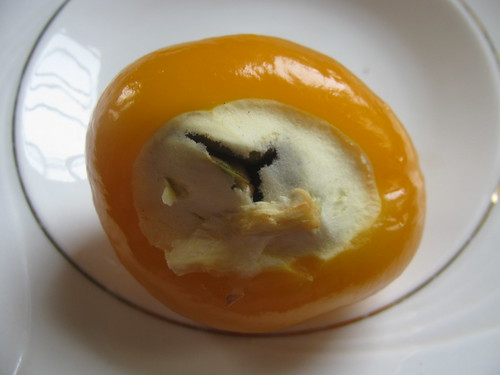 This mango-coloured flesh is crunchy but tastes or eats nothing like an Alfonso. And though a hard centre seed is common to both, the seed of this fruit is heart shaped and can be split into two parts. 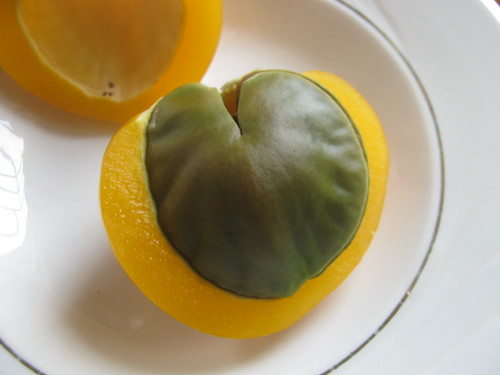 A scrape of the white lining, which cushioned the seeds and two thin halves, about half a centimeter thick of one fruit are ready to be crunched. 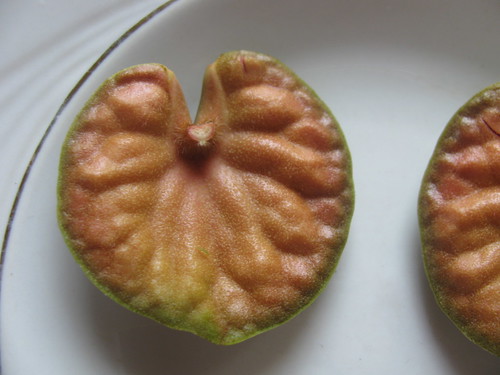 The taste is weird – a fusion of carrots and fresh green peas. Somewhat sweet and juicy with a decidedly ‘spring’ /clean flavor. When I tired of eating it, I attempted to pickle it with sugar and salt, and toss it with some green chilli peppers and basil. Interesting flavors and texture – chewy with a bit of crunch. 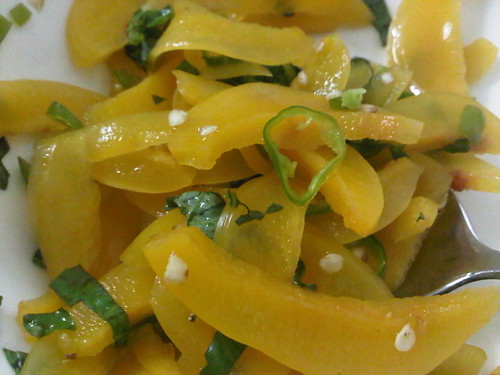 Imagine my frustration though when I came across this rainy season fruit…and no one could tell me its common denominator English name. There is no end to the vernacular names I’ve heard it called, Epapa (in Kalabari, a language indigenous to people in the south of the country in a state called Rivers state ), Achicha from the Igbos of the east, Ajirinja…..from, I don’t know. 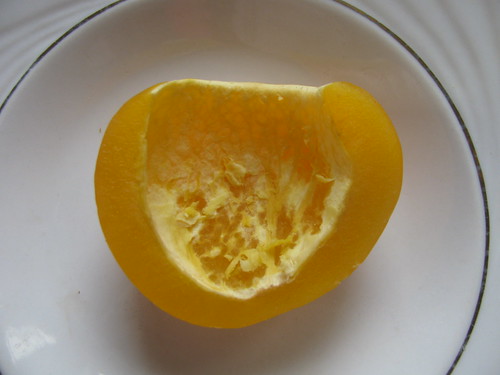 In desperation, I cried out on food52’s foodpickle – also one of my favorite things. Consider it the twitter for for those in a foodie bind or rut. Like I was. Though I’m not sure I have the answer, people suggest it might be a relative of the mangosteen or a fruit called the Mammee apple. Glad for some clues, I’m still on the hunt to verify it once and for all. As soon as I know more, I’ll share it here. If you do know the name, pray do tell and put me out of my misery.