I say it goes by many appellations. It starts off as ‘Poor planning results in burnt paella’ and quickly transforms itself to the ‘Husband’s most requested dish’. 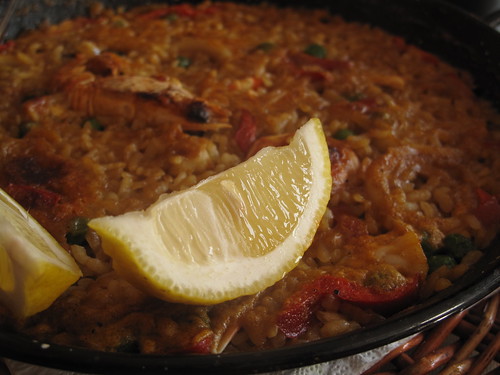 No mean feat, considering that husband has no memory when it comes to meals. 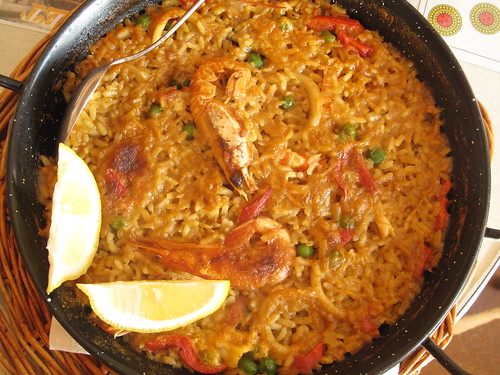 Scanty on the shellfish, methinks

Friends and readers, I must introduce my husband to you. Have you met him before? Ok, well here he is in brief. Food lover, but not to cook. To eat? Yes. Loves textures, flavours and weird combinations. Orange marmalade on toast with fried, spicy eggs anyone? Personally, no thank you but….

A lemon wedge…to brighten up the taste

And memory? What? What memory? Doesn’t have one for some matters might be the right answer. Perfect? No. Right? Yes.

Take this soufflé I made which he ate and promptly forgot about a mere day later when readers of my blog spoke to him about it. Not feigning anything, he said ‘I didn’t have any of that’, inadvertently calling me a ‘liar’. Sigh.

These moments of weakness are thus balanced when a plea to make Paella happens not just once but twice in the first half of the year! And so it is that on a certain evening, I sweated, slaving away in the heat of spring, recreating the Catalan symphony which first was … last fall. 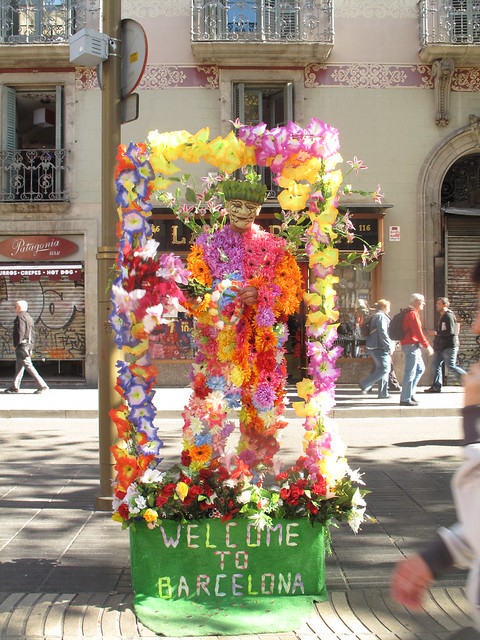 On that fateful occasion, we travelled to Barcelona, and I without paella pan. Silly but thankfully in the end, I had a delightfully fragrant and tasty pan of paella, with more socarrat (crusty rice bottom) than I desired but my husband, kids and I happily gobbled it up.

Socarrat, a seductive caramelization of the bottom layer of rice.

“Socarrat (Catalan), quintessence of the perfect paella and for which the restaurant is named, is the delectable, sensuous crust that forms on the bottom of the paella pan when the liquid is rendered and the rice reaches its peak of succulence.” 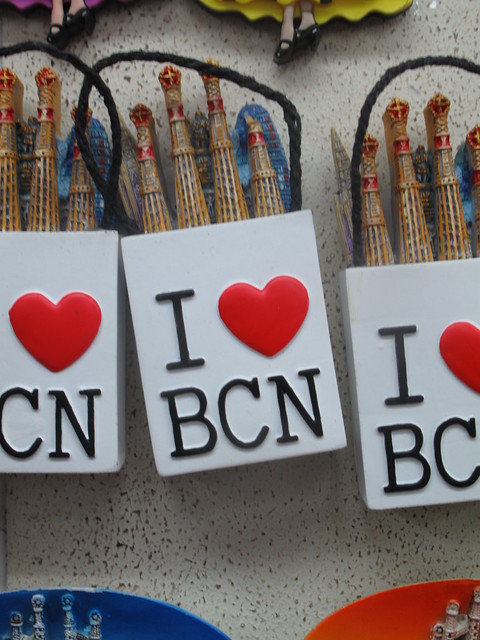 And so, if you happen to have been in sunny Barcelona, strolling down its famous street ‘La Rambla’ when this dish was invented, you might be tempted to call anything colourful, packed with flavor and a pleasure to eat  like I did, Paella La  Rambla.

The end result of the dish is like the coming together of a great orchestra. I’ve made it thrice, with no regrets…or complaints as such. Fresh mussels. Frozen cooked mussels. Langoustines or King prawns. Squid…..no squid.  Tasty….every single time. 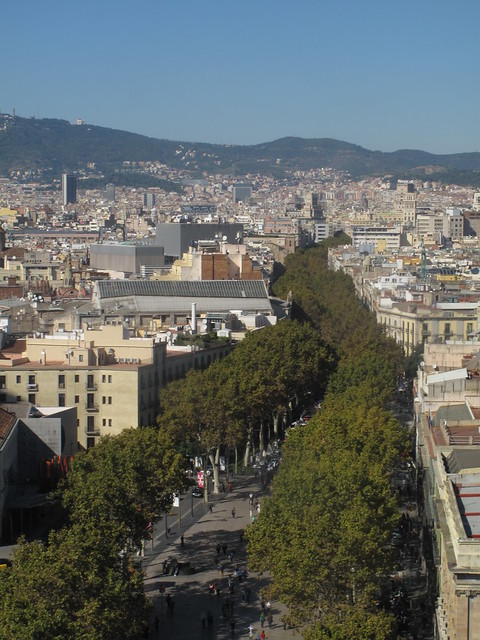 Paella pan on the hob, blue and orange flames dancing underneath the steel.  King prawns in shell, onions and thin slices of garlic gently cooking in a light coat of oil begin the dance.

Once pink, they are hauled out of the pan and shelled.  The shells soak in hot water, with a pinch of salt and saffron for a few minutes before they are blitzed with drops of shrimp boil to make a seafood stock.

The empty pan is greased again with butter and slices of chorizo are added and fried till the oil becomes orange and the smell wafts around the house. Luckily the girls are out and the son’s asleep – no one but me can ask for tasters. 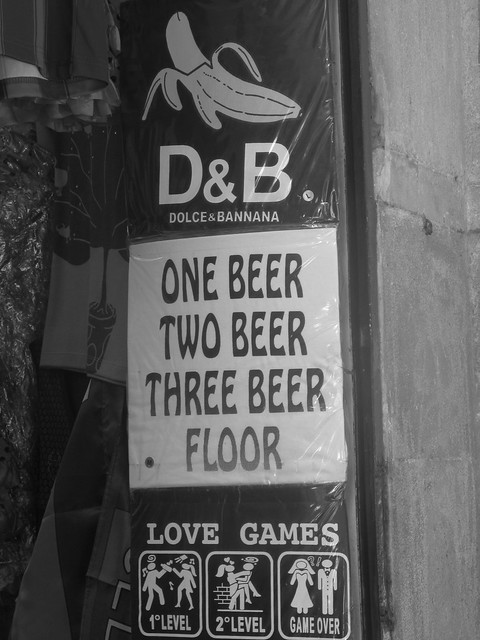 In goes the tomato sauce, coaxing harmony out of all dried sausage, getting the flavours to meld into a cohesive, wholesome sauce.  Watch the sauce as it sizzles when you add hot, thick stock! 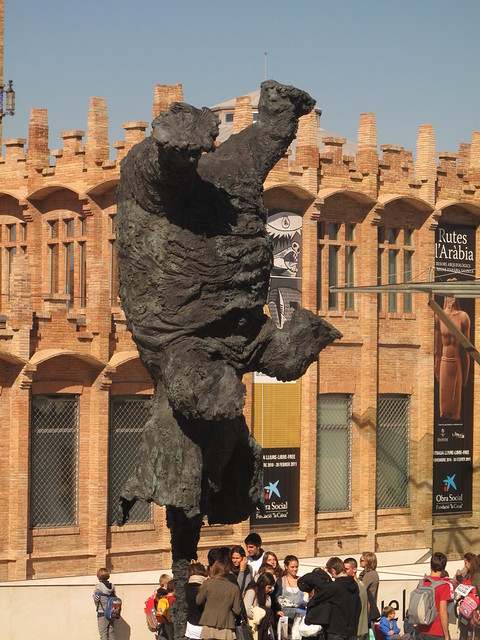 Paella, a dish worthy of head stands. I suspect Elephants think so too! 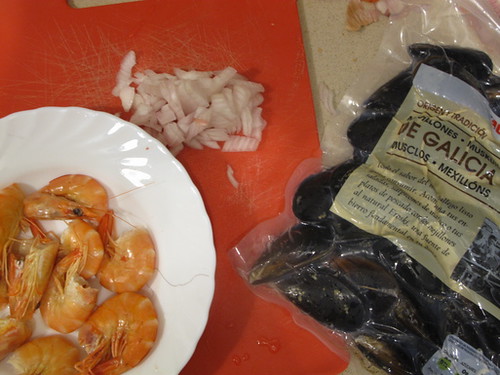 Remove from the heat. Put heads in a jug and then shell the prawns or langoustines. Don’t discard the shells; instead combine with the heads for the stock. Add a litre of boiling water to the heads and shells. Add a pinch of salt, ½ teaspoon of Shrimp boil and the saffron and allow sit for 3 – 4 minutes. Then blitz in a blender or with a hand blender, about a minute till the shells are broken down and the liquid thickens. Pass through a sieve twice and reserve the stock. Discard the shell mush.

In the pan, put the rest of the butter and oil. Stir together and once the butter is melted, add the remaining diced onions and chorizo. Stir around till the spices are coaxed out of the chorizo into the oil, and it turns a vibrant orange. Add the rest of the garlic slices and the squid chunks if using. Stir and let cook for a couple of minutes. Put the tomato sauce in the pan and stir around. Allow to simmer for about 5 minutes. Then add half of the hot saffron stock to the pan and let simmer again, for a couple of minutes.

Stir again and sprinkle the rice around the pan. Let cook for a few minutes and then stir around a couple of times. Cover with a tight fitting lid and simmer on low heat for 15 minutes. Taste, adjust seasoning and add half of the remaining stock. Allow to cook till the liquid is absorbed and the rice soft. Add the mussels and drizzle some but not all of the remaining stock around the pan, replace the lid and let cook for 5 minutes till the mussels open up. Discard any which remain shut. 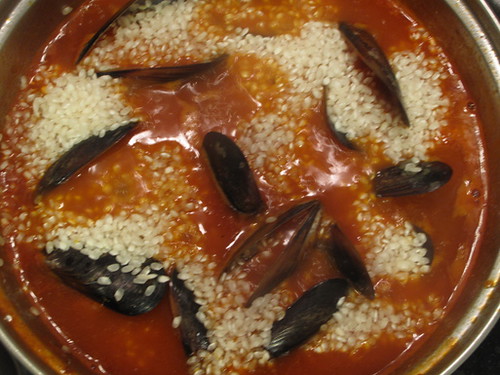 Getting the socarrat. Socarrat (soh-kah-raht, from the verb socarrar, which means to toast lightly) is the caramelized crust of rice that sometimes sticks to the bottom of the pan. It is the prize in a well-made paella. To get some, increase the heat at the end of cooking, paying close attention to the sound of the rice (it crackles) and the smell (toasty but not burned). After one or two minutes, poke under the foil with a spoon; if you feel just a touch of bumpy resistance on the bottom of the pan, you’ve got socarrat.

Finally sprinkle over the frozen peas, the prawns and the remainder of the stock. Let cook another 5 minutes.

Take off the heat and leave covered with a tea towel for 10 – 15 minutes so the flavours marry, the rice absorbs the liquids and it all melds together. Serve…. 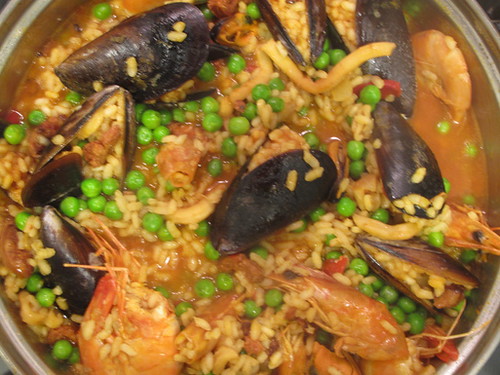 Husband sits at the table and eats half the pan. Few words spoken, just thanks in his eyes and sullied hands…… and two words ‘My Paella’! 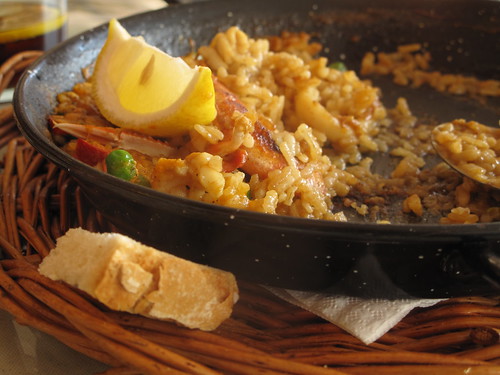 And so, his poor memory is..…forgiven. I’m looking forward to taking the next Paella order. Are you a fan? 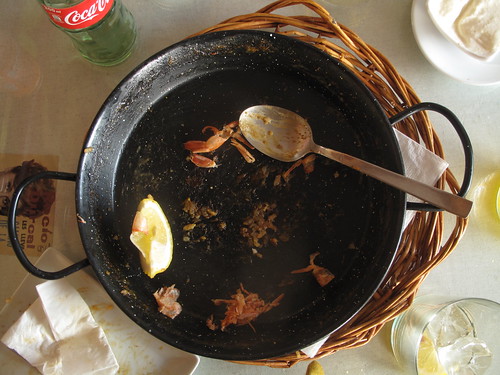 Paella, Rice at its best – an essay on Fine Cooking