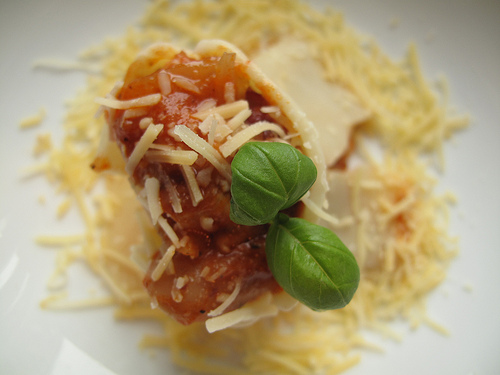 Things are rarely what they seem (and people for that matter), skimmed milk masquerades as cream…as does 3.5% Turkish yogurt, which is to die live for….My addiction! 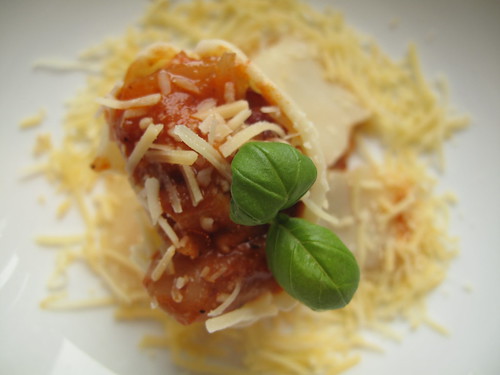 Moving on, the story I bring you is certainly a case of not judging a book by its cover….
I mean, you can’t tell human carnivores from herbivores can you? Not by their dispositions, or height, or weight for that matter. I know many slim meat eaters (I’m not one of them I might add!) and therefore I presume there’ll have to be many not-so-slim vegetarians, but let that discussion hang there for a mo and I’ll tell you why you’re here, listening to my ramblings. 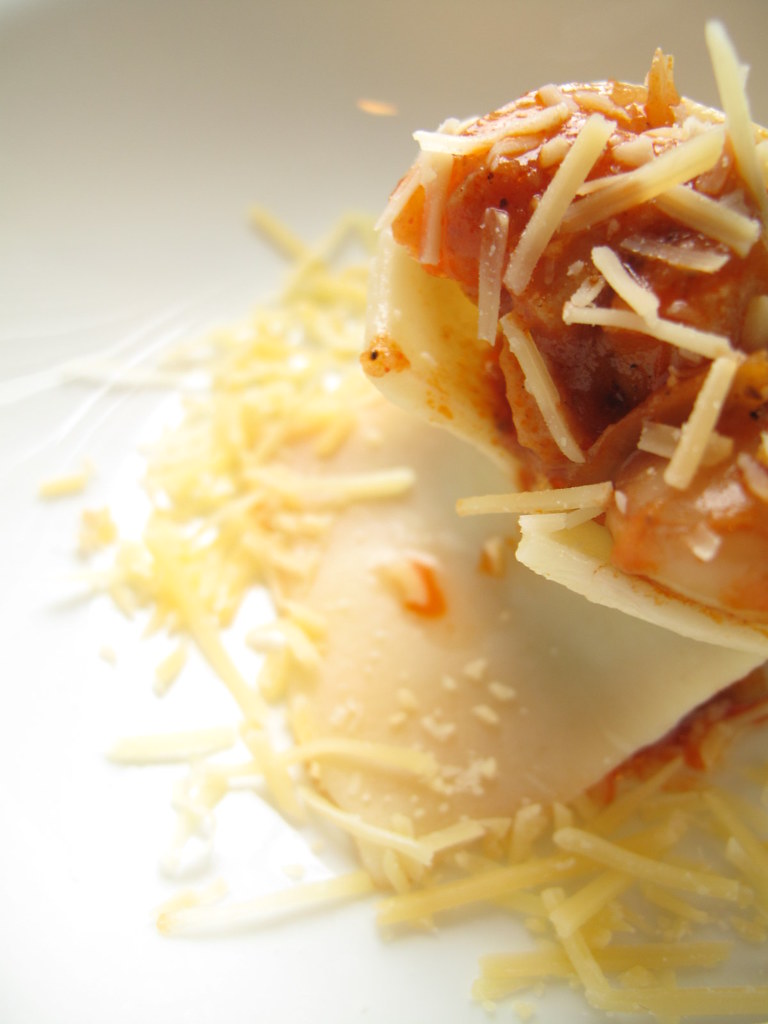 Weeks ago in the office, a colleague and I happened upon the hot topic of – Steak , a discussion (which I can’t fathom the origins but that’s by the wayside isn’t it. To the heart of the matter now :-), which lightly degenerated into a little argument if truth be told. Harmless albeit. Anyway, since I wasn’t raised a steak chic, I was saying to him the difficulties I had cooking it till I found Jaden’s recipe. It was at this point he said the unexpected: ‘Well Oz, I wouldn’t know… I’m vegetarian’. 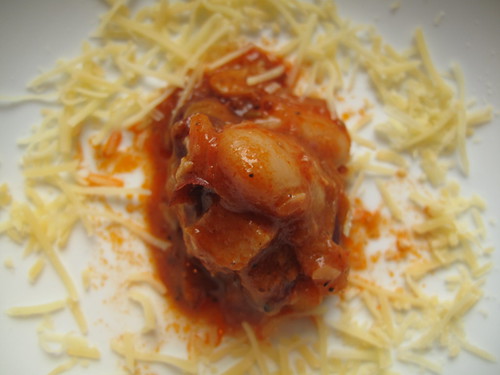 For a few seconds, I was quiet. Ask me why? I don’t know. I guess I just didn’t expect him to be vegetarian. There’s nothing wrong with being vegetarian. What completely bowled me over was the strength of my bias. Why couldn’t he be vegetarian? What made me think he was a meat lover? Had he said anything to hint at this? or not? and was it even important? Afterall, my good friend S who is veggie has been over twice for meals and has inspired me on each occasion to make soups with heart and soul. Though she eats fish, just like P. Actually they are pescitarians – vegetarians who eat seafood!

Anyhow, further conversations with P got me thinking about what he calls Chili sin carne – a vegetarian version of chili con carne, which I made. Also, since one of my new year’s resolutions is to eat more pulses and become a Flexitarian, (a vegetarian at least once a week), the following recipes fit in rather nicely. 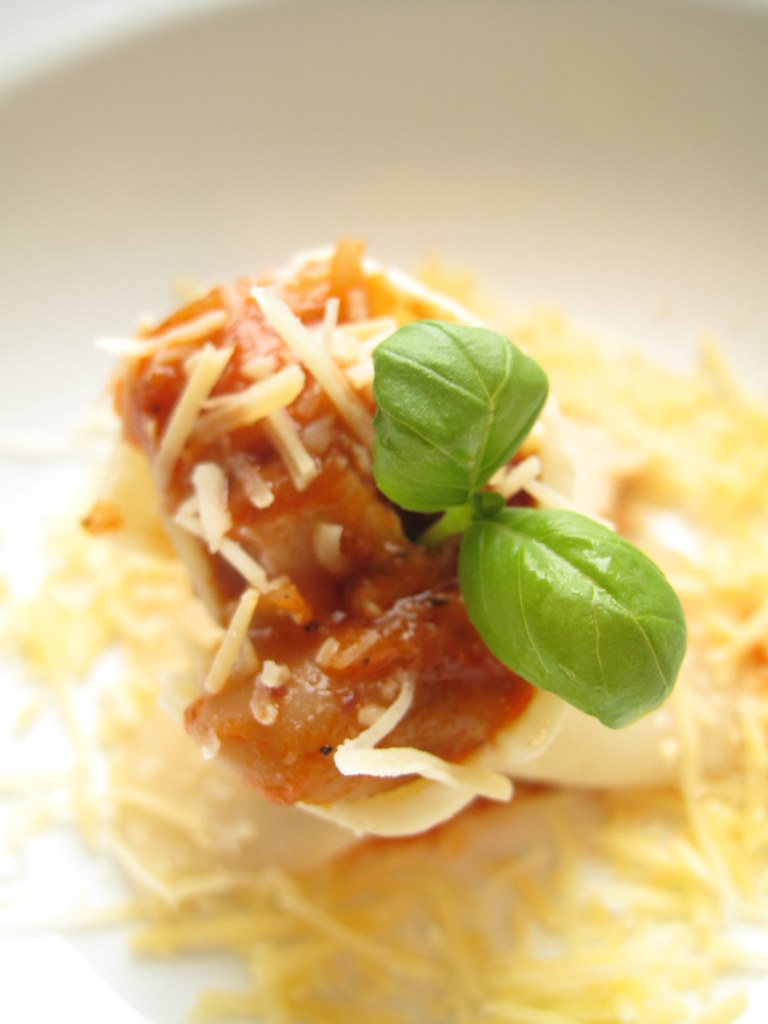 All you need is a pot of chili sin carne, some pasta tubes (I use Schiaffoni, which are rather large tubes) and dumpling wrappers, cheese, bechamel and you’re set to go off to make 3 different recipes. Mind you, a lot of these things are suitable make-ahead candidates so this also makes for super quick and super tasty meals, also perfect as appetisers!

Note that these are loose recipes, use the quantities you desire and style as you wish. Take these as mere suggestions. You also need to be aware that the Schiaffoni takes up to 20 minutes to cook before it becomes al dente/soft (for me anyway!)

The key thing is to have the recipes heated up and ready to go…. 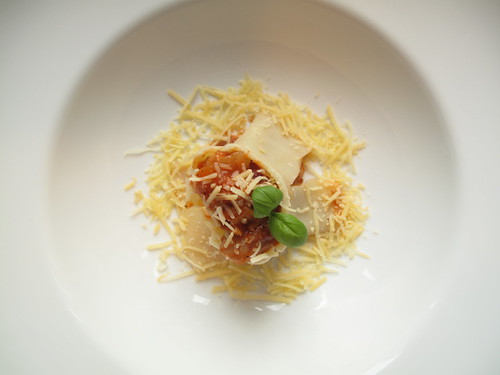 Place a pasta tube on a plate and fill the core with chili. Sprinkle some cheese over it and if you like, pop it under the grill for a few minutes. Garnish with a sprig of basil and serve. 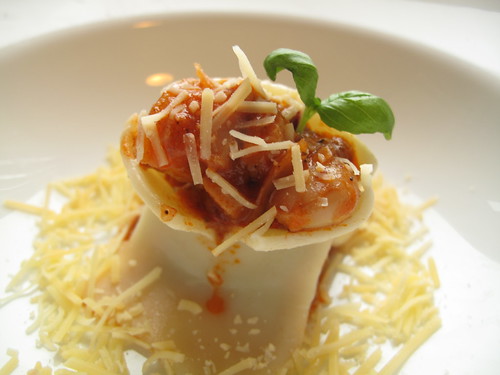 You just may end up with clean plates too…well almost! 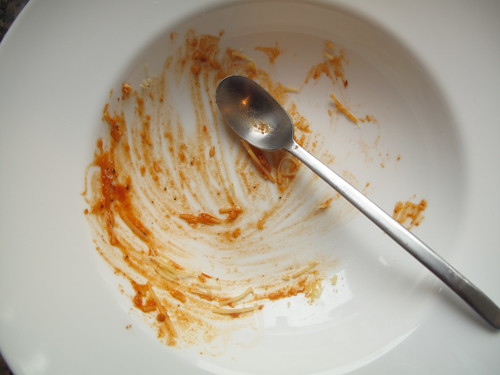 For this, you’ll need some bechamel sauce, in addition to chili, some Schiaffoni tubes and cheese.

Split the Schiaffoni tubes into two to form small sheets. 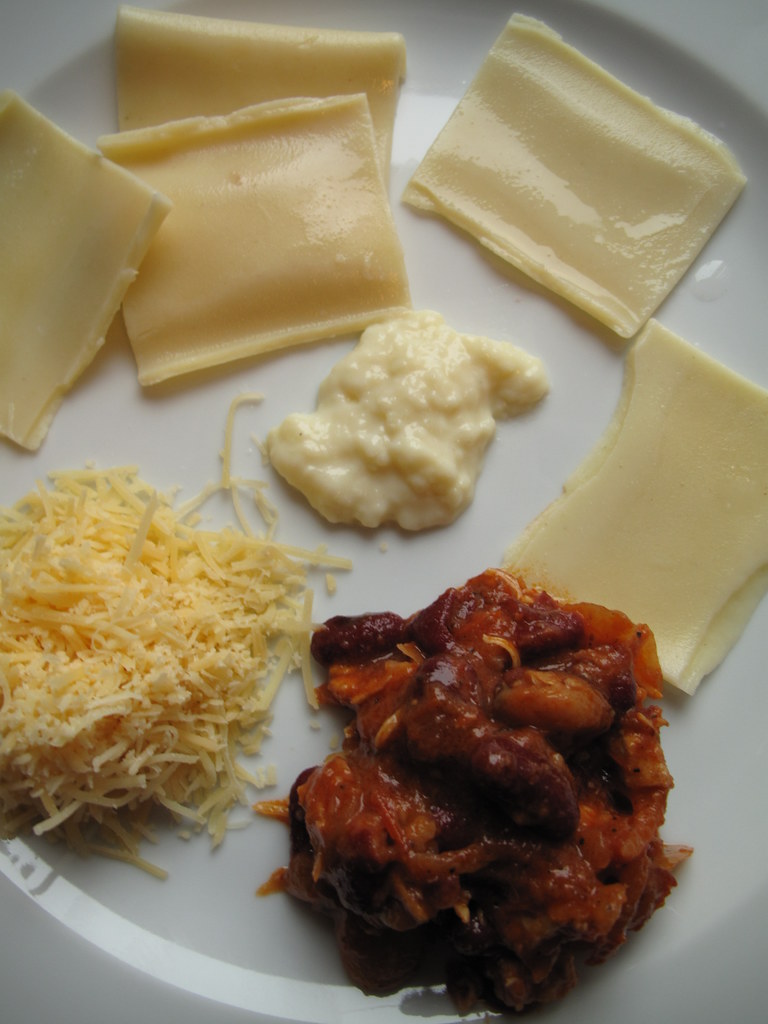 Then form two stacks with alternating layers of pasta, chili, bechamel (ignore my rather lumpy bechamel…case of not following a recipe :-)). 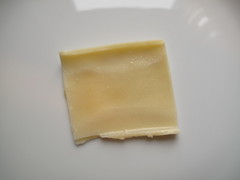 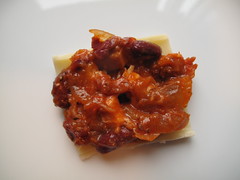 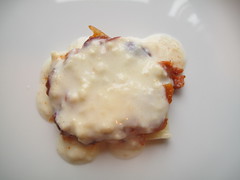 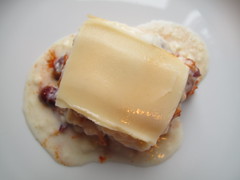 Finish with a layer of pasta, followed by some bechamel sauce and then a sprinkling of cheese. 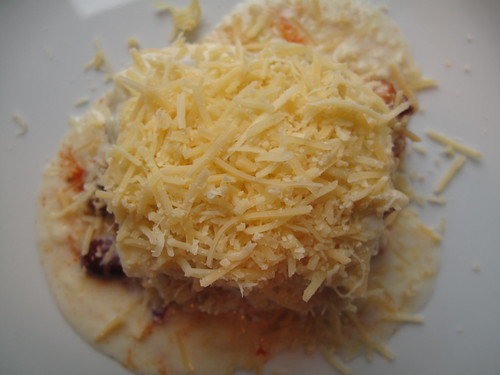 Pop this under the grill for a few minutes… 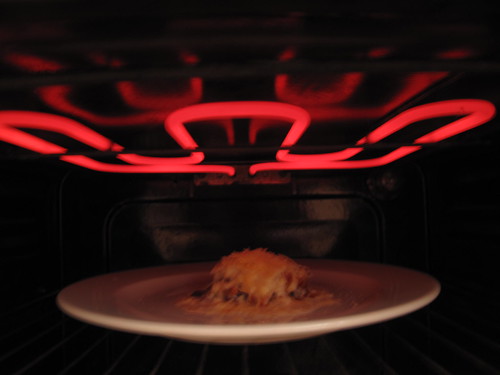 …till the cheese melts and is golden! 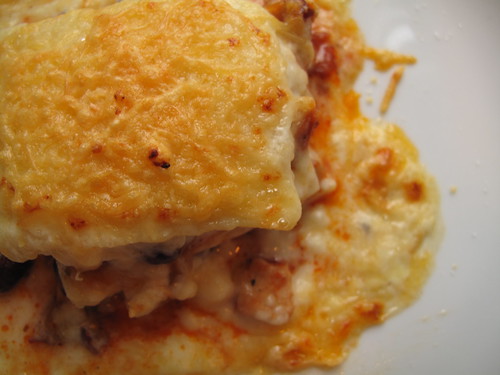 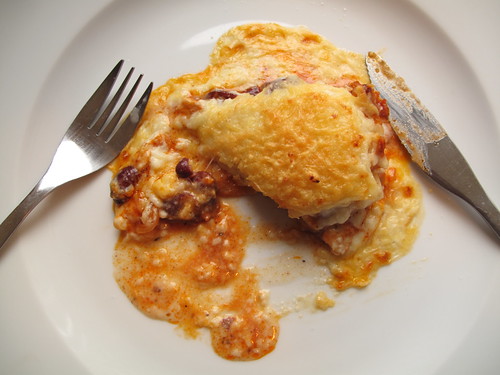 I think it makes a great starter!

I am a dumpling lover, having made tons of them recently! So, with some leftover dumpling wrappers, I decided to try out a chili bean ravioli served with basil pesto oil. 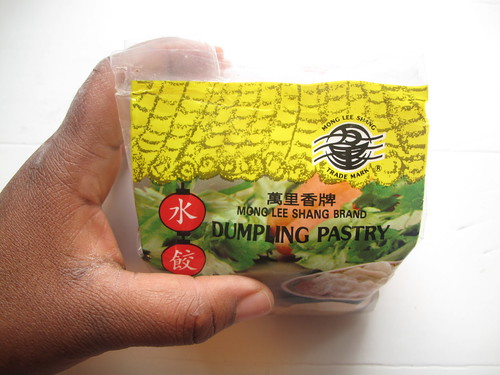 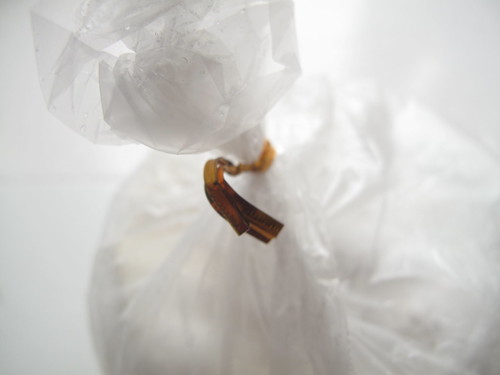 Place the required filling in the centre of one wrapper – I used some grated cheese and chili. 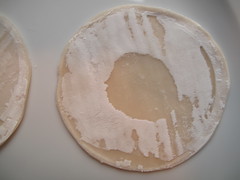 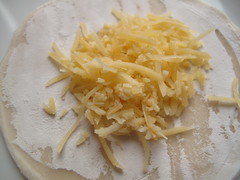 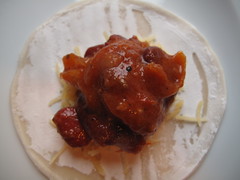 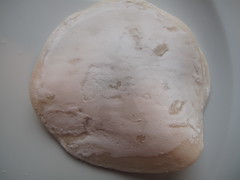 Dip your finger in water and wet all around the edge of the wrapper. Place the second wrapper over the top of the filled one and press edges together to seal. 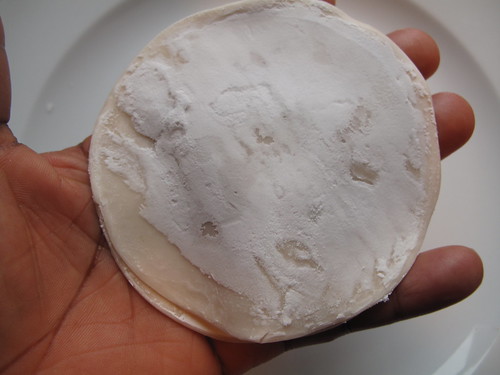 Place in a large pan of salted boiling water and cook for 8-10 minutes, till the ravioli rise to the surface and shrink a bit. 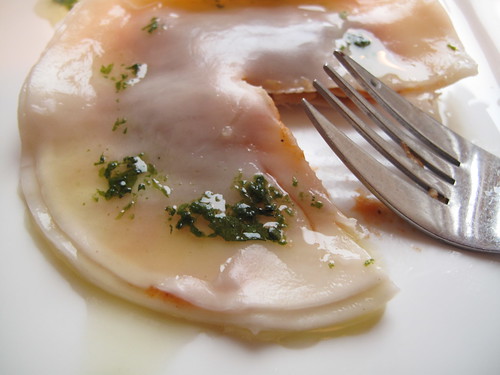 Serve with some basil pesto oil (a mixture of pesto and olive oil). 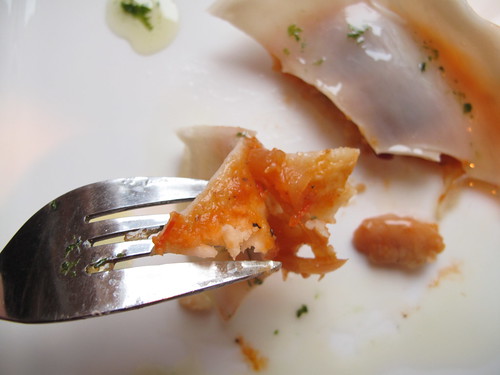 * Clink* to keeping with our Ten in 10 and to my New Year’s resolutions of eating more pulses and having veggie meals!