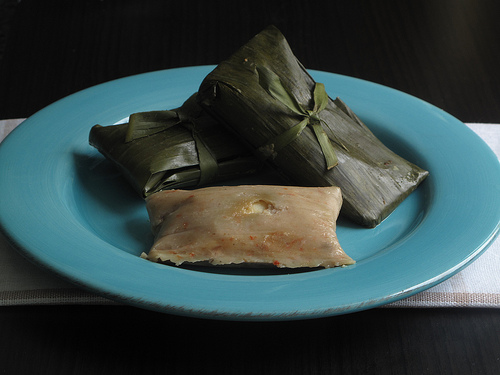 At eight years old, I was full of ambition. I had my mind made up and nothing, absolutely nothing was going to take my dream away. 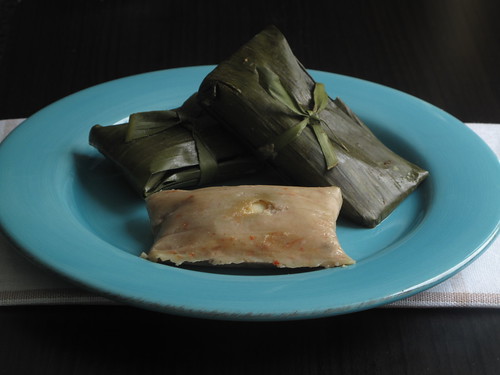 My dream of….…..wearing glasses. Please don’t ask me why but to me, glasses were the ‘epitome’ of chic and I was determined to be up there with the rest. As God would have it, I loved reading and so I made sure I read in the dark, past lights out. And to compound matters, I drank ‘gari’, a coarse flour somewhere between couscous and semolina in grain size and definitely in the same ‘yellow-hued’ family. 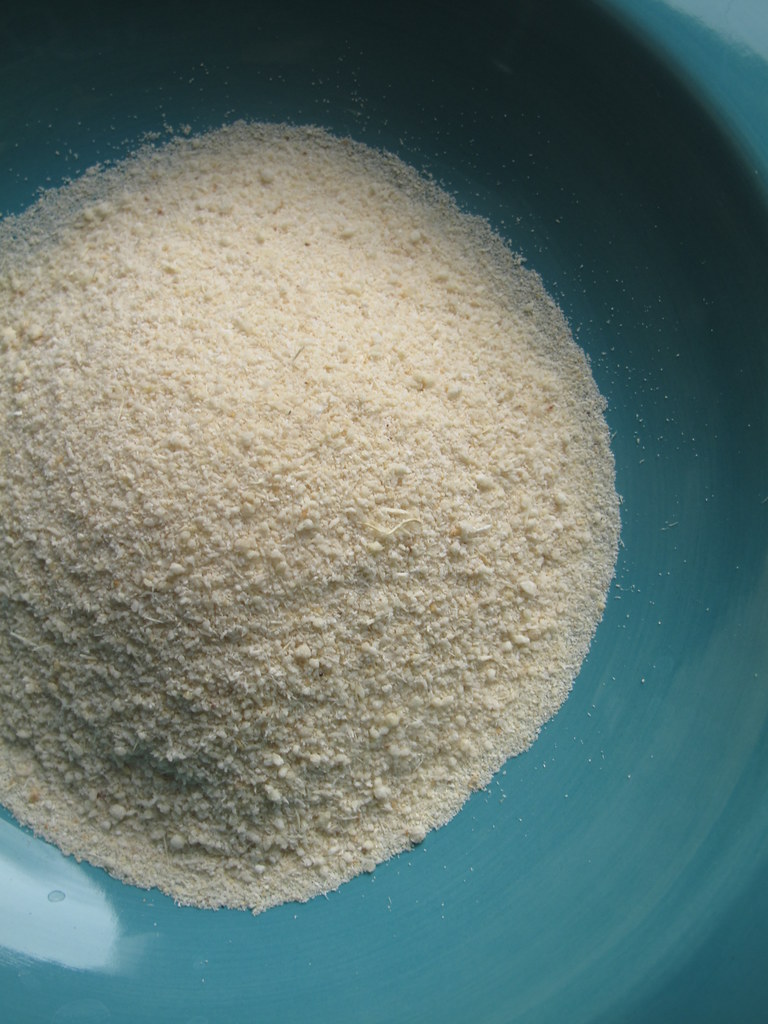 Gari is made from cassava tubers which are peeled, grated, left to ferment and then fried in some oil which lends it is distinctive colour. When palm oil is used, the result is almost bright yellow. Use some other oil without red pigments and you have ‘white’ gari which isn’t white at all but shades of cream and beige. Gari can be ‘drunk’ as a snack, requiring no cooking, made with cold water and ferried from bowl to lip with a spoon or it could get the hot water treatment, which turns it from grains to starchy glue. We call it eba when its cooked, the result is like similar to cooked polenta though it doesn’t require anywhere as long a cooking time as that. It ends up as a starchy mass which then forms the carbohydrate partner to soups and stews. 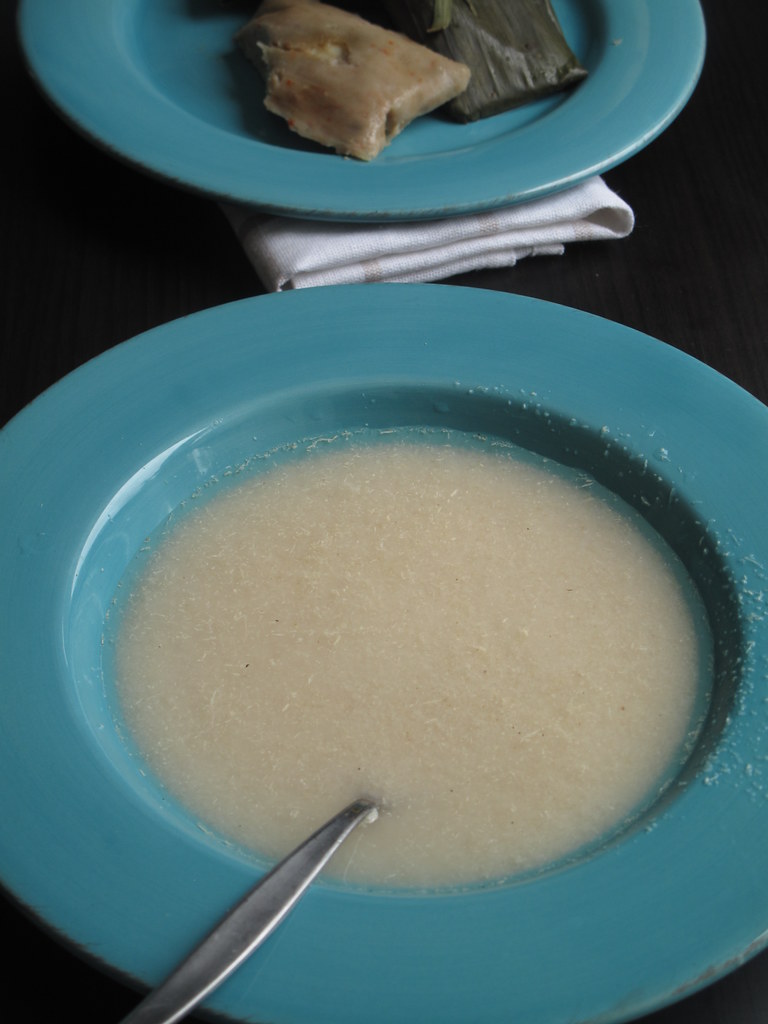 Now it is a well known secret that ‘drinking’ gari is bad for your eyes. Why I haven’t done any nutritional analysis to verify that the vitamin A levels for any given quantity is below the RDA (recommended daily allowance), my father and mother drummed it so often in my small eyes, I sort of feel they are the authorities. Anyhow, on any given day of the week, between returning home from school and dinner, you would find me with a bowl of gari. 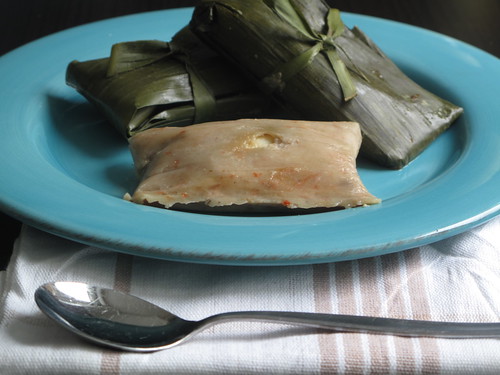 I would start by perching on a kitchen stool near the sink. And then my journey would begin by putting a small amount of gari in a deep bowl. Setting it on the counter in the pleasant heat, I would reach for the bottle or gallon of ice cold water. I would pour water into the  bowl, till it rose to the top. With a spoon, I would stir the contents to make sure the gari had absorbed the water. Seconds later, I would tip out the little pool of water, flecks of gari eddying and swirling about till not much liquid was left. I would get the sugar bowl and put 4, 5, 6, 7 cubes of sugar and 3 ice cubes. The silver back of my spoon would press hard down on the softened sugar squares, grinding them softly into the yellow meal. And I would stir again and then gently loosen with more cold water. It had to be cold, ice cold water or else to me, it was no good. All this had to take no more that a few minutes for gari has a propensity to swell. Set it on the counter after the first watering and for a moment, forget it. By the time you return to your ‘snack’ or meal accompaniment, you’ll despair. It would have doubled in volume, twice the amount you wanted leaving you wondering about the mountain of eating you’d have to do. For just as it swelled up in the bowl, so would it in your buik (Dutch for stomach). 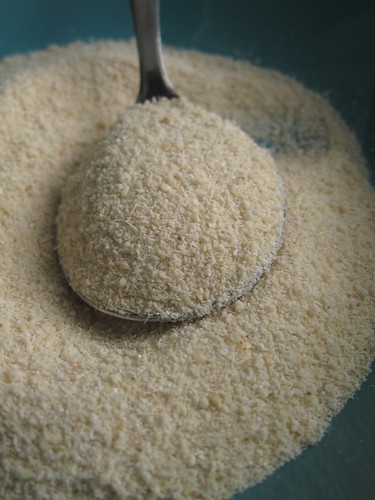 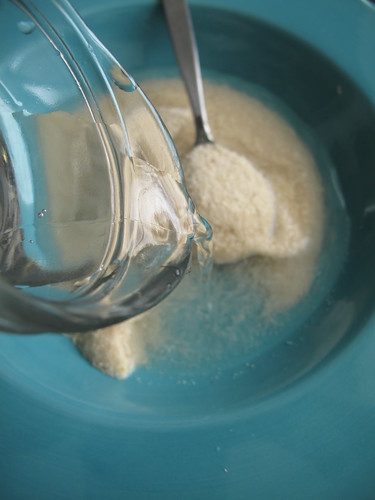 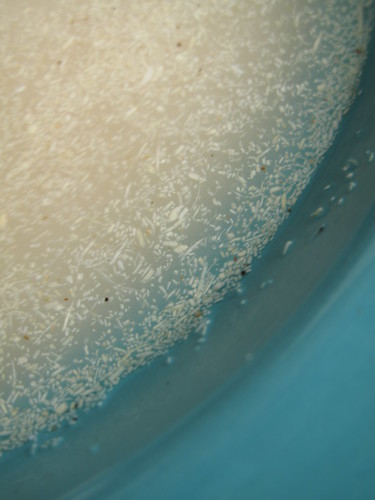 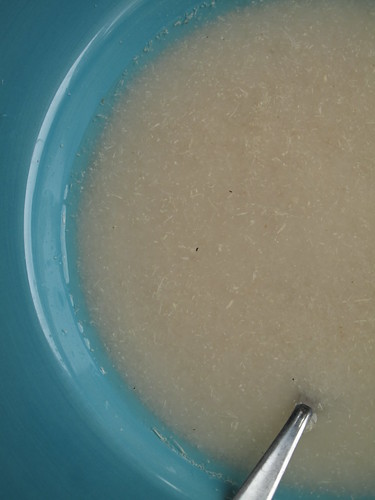 There are a string of popular sayings in Nigeria, all revolving around ‘drinking gari’. Say for instance you want to buy something(s) which would leave you broke (in the case of my American friends, apparently that would be Whole paycheck Foods), you’ll say, ‘If I buy this dress, I’ll have to drink gari for the rest of my life’. And then the person listening to you would smile and laugh. Anyhow, I was always quick when preparing my gari. Always poised to ‘drink’ within the minute. 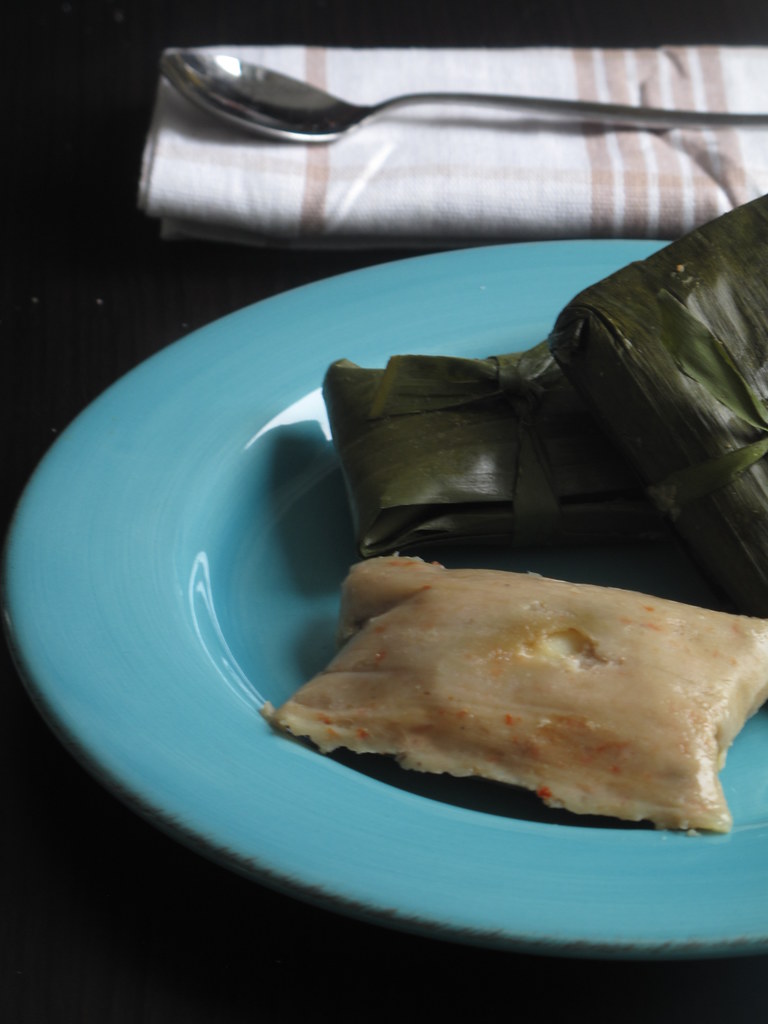 Sometimes we would have fresh coconut flesh, harvested from its hard brown shell and I would enjoy both together. On other days, I would sprinkle roasted shelled, skinned peanuts into my bowl and enjoy the nutty goodness. If I was feeling really daring, I would empty half a tin of evapourated milk and a couple of teaspoons of Milo, a milky chocolatey drink and enjoy the midnight feast of secondary school students  in boarding house. When I didn’t have it as a snack, I enjoyed it with stewed beans or Moinmoin, a spiced bean cake. Whatever the case, I enjoyed it. Period. And truly my eyes went bad. And so I got my glasses. When I was twelve. I got frames which which had swirls of blue and green. They were…..ok but I hated them. Not the glasses per se but the frames. They weren’t quite the ‘cool chic’ ones I figured in my mind. Twenty four years later, I look at myself in the mirror. I love my glasses and no talk of laser surgery will convince me to give up my squint when my four eyes are off. I love the frames this time, thank God and I wear them with amazing regularity – come to think of it, I wouldn’t be able to see without them so I don’t really have a choice. 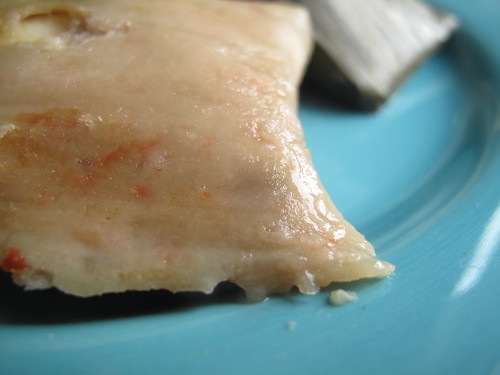 This weekend, I got out my bag of gari and had some – the first time in at least a year. No mama to scold me, or papa to talk about poor vision. No guilty feeling for the amount of sugar that went in the bowl, the sugar grains that would give me a pleasant crunch alongside the gari ones. With cold water and no ice, I ladled spoon after spoon, stopping for some steamed bean cake and then going back for more. Till there was none left. And all that remained were pleasant memories of home and tropical warmth and oh some more ambition, and this time not to do with my eyes, no no, instead to go grey silver and stay silver and I can tell you I’m well on my way, with 4 strands of the afore-mentioned to my name and head, well-placed in front. It seems I’m pretty good at accomplishing my physical dreams, so one day soon I’ll be slim. I believe it, I know it, I trust it. Till then, here is a delicious steamed bean pudding, in the manner of ukwaka, steamed plantain pudding yet made with the same base ingredients as akara, bean fritters. Delicious and a very fine companion for my gari. 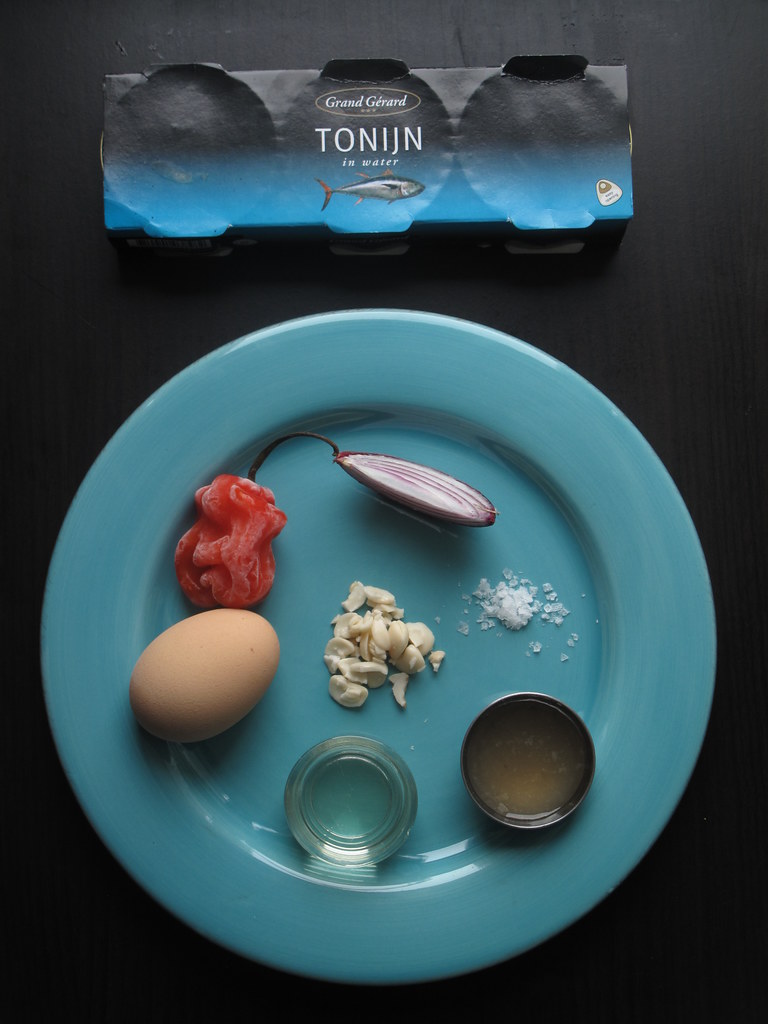 Make the mix In a blender or food processor, grind the beans with the onions, chilli pepper and stock till  you get a smooth, thick paste. If you rub a bit between your fingers, you shouldn’t see large recognizable chunks of beans.  If necessary, scoop the sides of the blender in and pulse till smooth. Put mixture into a large bowl and taste for salt – you should taste the sea :-). 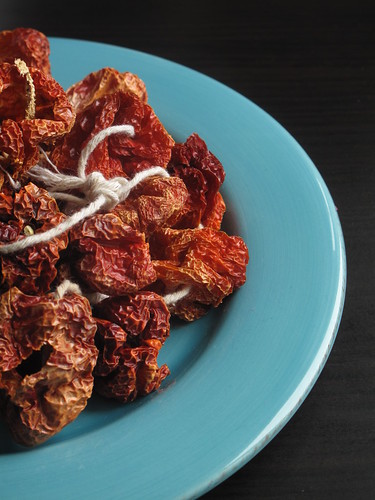 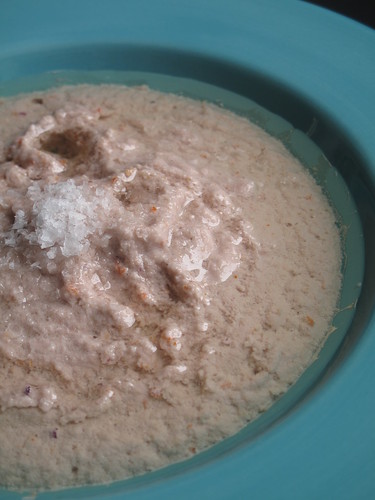 Stir in the oil and tuna flakes (if using) and then prepare to contain somehow, whether in wraps or ramekins. 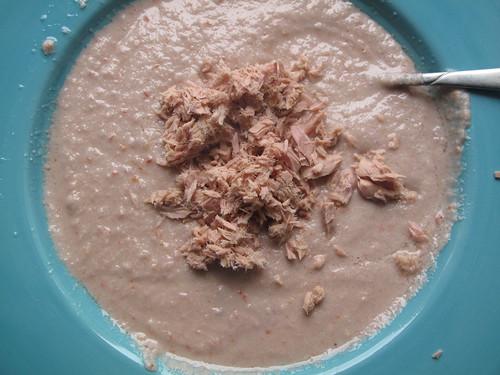 If using ramekins, oil them lightly and fill them up to about three quarters. Put in a pot, pyramid style and carefully add water. Steam for half an hour or till the puddings are firm to the touch and leave no wet residue.

If you are using banana leaves, then read on. I wanted to try out a different technique instead of my ‘banana leaf cones’, which end up with a rather large, oddly shaped pyramid even if very familiar. Hmmm. This time, I went for a flatter wrap and I’ll give you the spoiler: husband said ‘They’re too flat. They taste like Moinmoin but they don’t look like Moinmoin’. I smiled 🙂 and had to agree. However, this technique, learned from Elizabeth Jackson’s book ‘South of the Sahara’ works a treat, both for presenting nicely wrapped food parcels and just cause I learnt something new. Isn’t that always a joy? Take a piece of banana leaf and tear off strips along the ribs. You can use these as the ties or some kitchen string. Cut/tear your banana leaves along the grain into  15 centimetre (6 inch) widths. 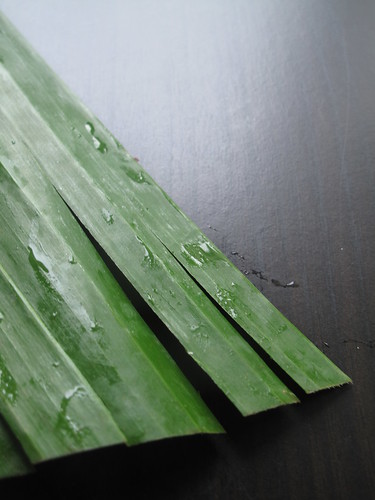 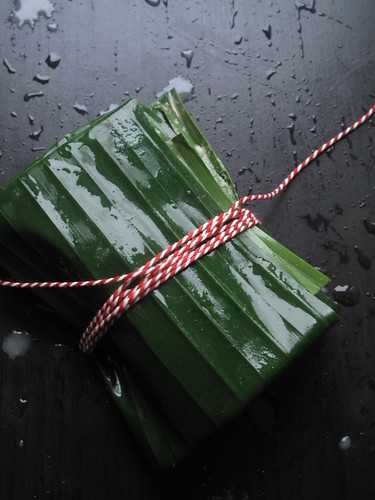 You may need to severe the cuts off the main branch remnant, using a pair of scissors. Place a few tablespoons of filling in the centre of the wrap, add a boiled egg quarter and fold the (width/shorter) sides in, so that one overlaps the other. You will end up with a long, flat ‘soon to be’ parcel. Fold the top and bottom ends in , overlapping again. . Then use the tie to bind around the middle of the parcel. 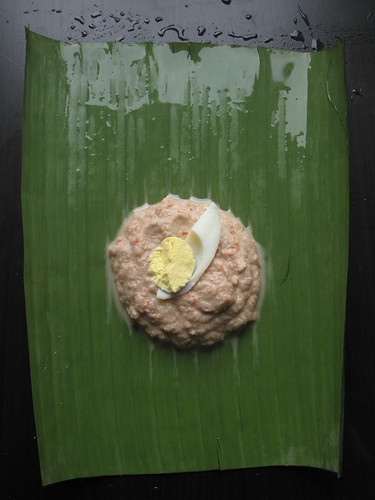 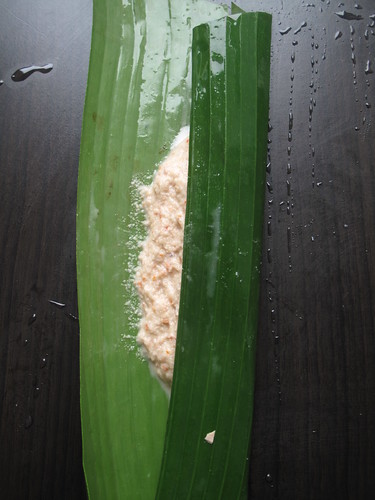 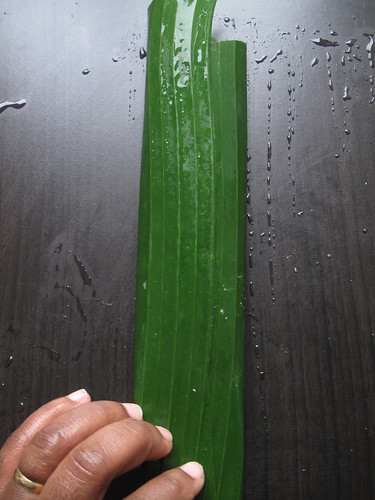 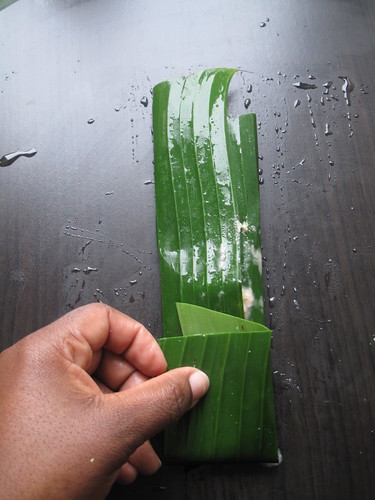 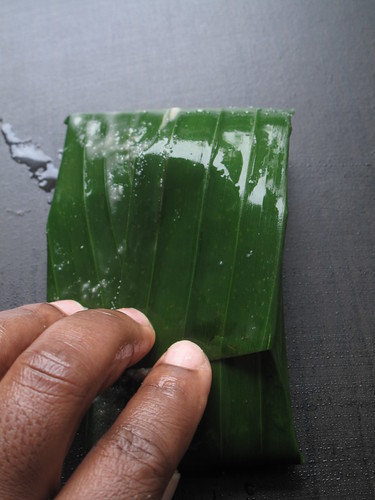 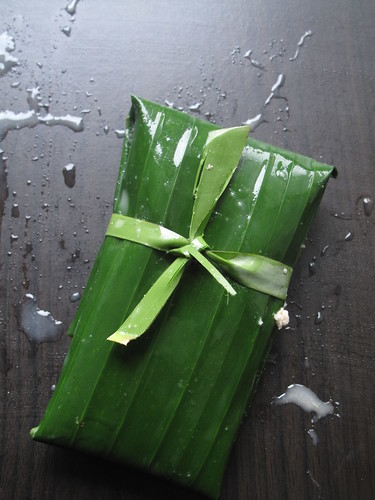 Continue till all your filling is used up. 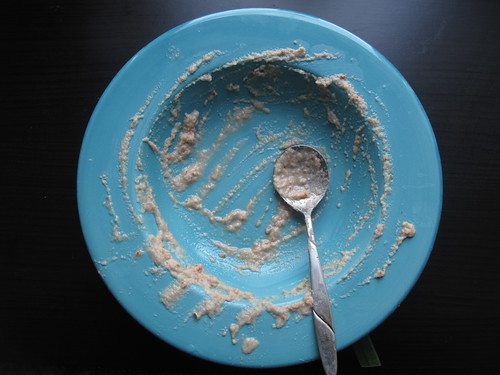 Place in a steamer and cook or in a pot. Pour in a couple of cups of water – not to cover the wraps but up to a third of the way up. 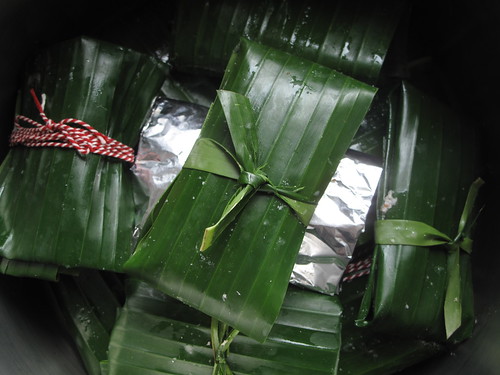 You could always start out with a little and add more water as necessary. They should be ready after half an hour of cooking on the stove top.The tastiest part of the moinmoin is usually the bits stuck between the leaves – not at the core of the wrap but coating the leaves. Yum – soft, spicy, rich, tasty bean cake. Pudding. That’s the grace of cooking it in leaves! 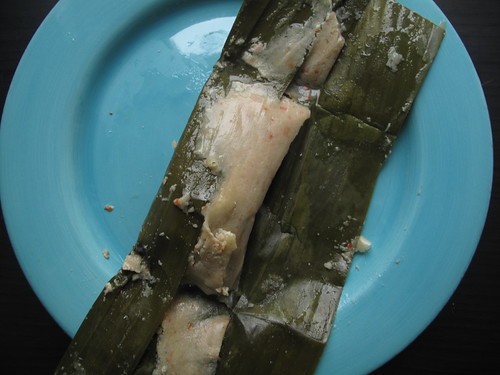 Enjoy on its own, with porridge oats, Jollof rice…and even gari. Like I did. 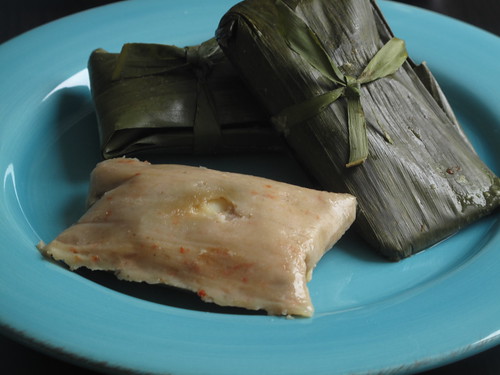 They keep very well in the fridge for about a week  and in the freezer for much longer. To reheat, place a few cold wraps in some water and heat on the stove-top or warm in the microwave.  If warming from frozen, realise it will take much longer to warm up.

If you want to know more about Nigerian cuisine, read Trix of Tasty Trix’s wonderful restaurant review at Peju’s in Baltimore

And if you’d like to know more about gari, go here

Have a good weekend – I’m heading out of town – one of 4 trips in the next month! This always seems to happen to me in Autumn – travelling galore, mostly for work! Last year was no exception… I enjoy it though, so no complaints! Take care and stay well and this means I may not be able to get on a computer much in the coming weeks. *Sniff, sniff*. 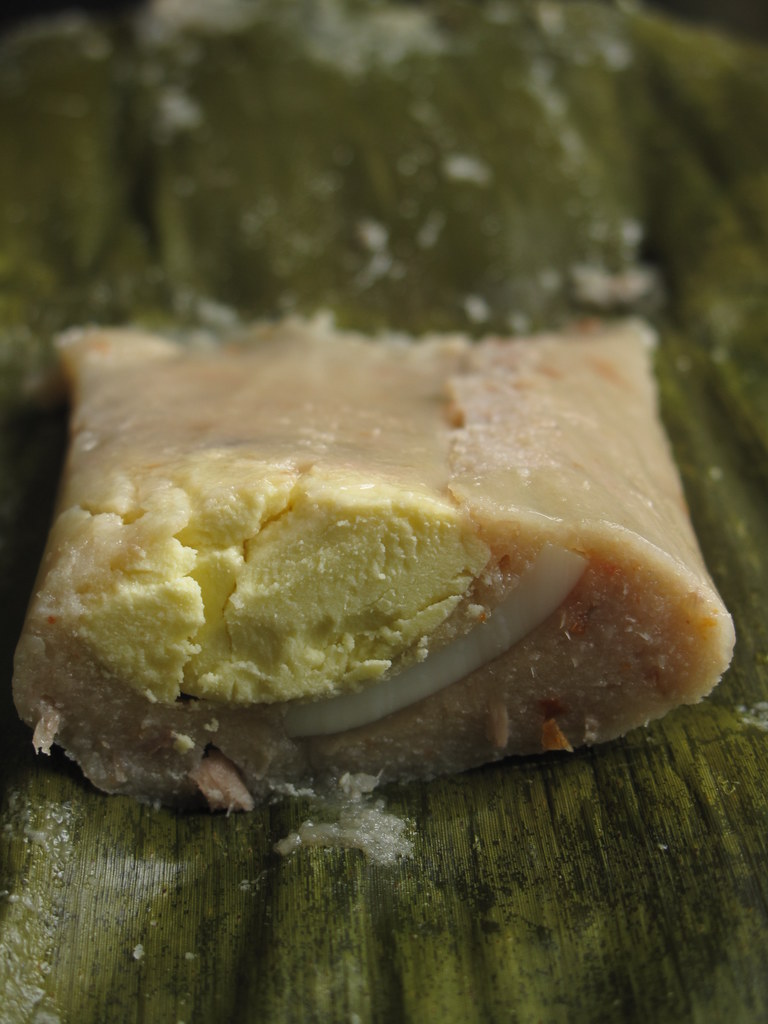 What were you childish childhood ambitions? Did you accomplish them?