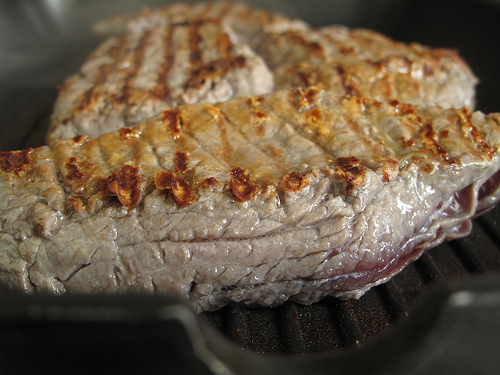 Show me a man who doesn’t like sizzling steak, and I’ll tell him who he is….he may be vegetarian and not know it. No offense.

I like the idea of steak – a smoking hunk of beef on a warm plate – tasty, rested – heaven! I wasn’t raised on steak, a natural born steak eater and cooker, not.  Good, stewed beef – yes; de-skewered Suya (Nigerian version of Satés) – yes; in soups – for sure but as a slab for dinner – no, never.

Yes we had BBQs too, thank you very much, but we ate our way through tons of marinated chicken, ram and goatmeat but never beef. Its not just our culture. 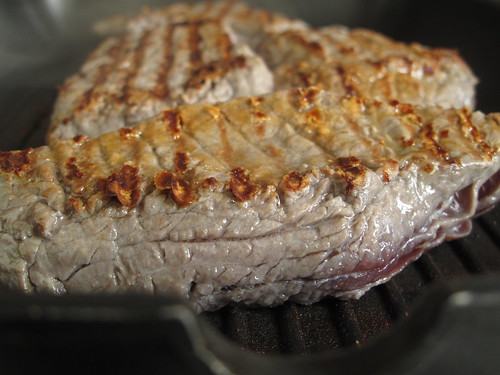 So what I know about steak and the cooking thereof is a collage of blog posts, TV demos, sizzling book recipes and the like. I guess steak to me is like 3 hot meals daily to the dutch – foreign, uncommon but nevertheless, with tons of appeal (steak to me that is, not entirely sure about that dutch hot meal for brekkie).

If you didn’t know, the dutch generally have one hot meal a day and that’s for dinner. They don’t count warm soup at lunch time as a hot meal…hence my reference above.

But all this hasn’t dettered me from trying anyway, though the thought of ‘rare’ has always disturbed me – meat with its lifeblood in it – hmmm, not. But I have a food loving man for a husband and a meat-eating first daughter, so I keep trying this steak business – with mostly less than average results.

Then last summer something changed when friends invited us for a BBQ and my husband had steak – medium to well done. Boy, for someone who had always been in violent agreement about bloddy steaks, he rapidly changed his mind after consuming wedge after wedge of perfectly cooked meat. And has requested it ever since. And herein lies my dilemma – number 1 hates pink meat – she’s only 5, doesn’t eat out often yet says its not cooked ( another cook in the making). Then the husband starts requests medium steak – never mind that I haven’t learnt to cook steak well done  properly, not to talk of going medium. 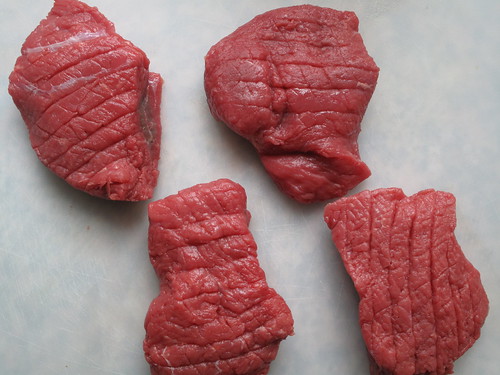 Then I discovered Jaden’s recipe for Gucci steaks and decided I had to give it a try – at least once more, before I threw in the towel and opted for early retirement. Anyway, I didn’t say anything to husband about my plan to try the recipe out and so I began the journey of blinging up dinner that evening. All I needed was my steak and some coarse sea salt which I had. 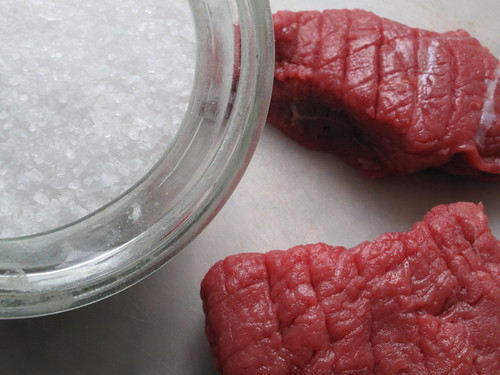 First, I measured the steaks and then did my internet cook routine – googling to ensure that I properly converted from cm to inches – do you know that I’m a scientist, and then I didn’t have the Culiverter either. Anyway, the steaks measured about 2cm in thickness which I rounded up to 1″ inch – fatal error #1 and I’ll tell you why in a mo. 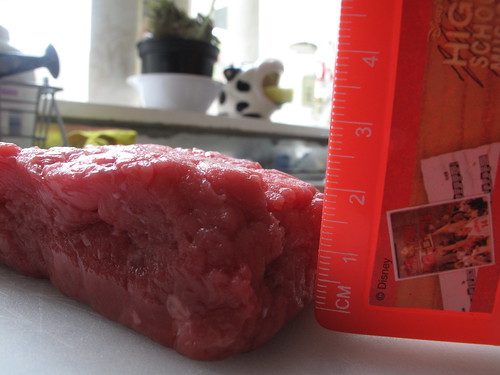 Joy recommended a certain amount of salt depending on the thickness of steak. So for steaks less than an inch thick, a half teaspoon of salt was required and the time to leave it salting was 15 minutes, now for a 1 inch steak, the same amount of salt was called for….but salting time was longer – a whole half  hour. 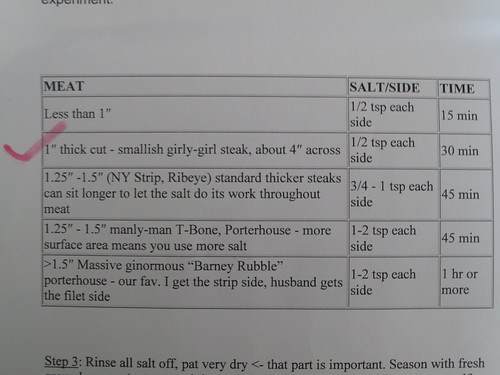 I measured out a half teaspoon of salt which I plunked down on the steaks  – it wasn’t enough, and so I added another half teaspoonful  – mistake #2 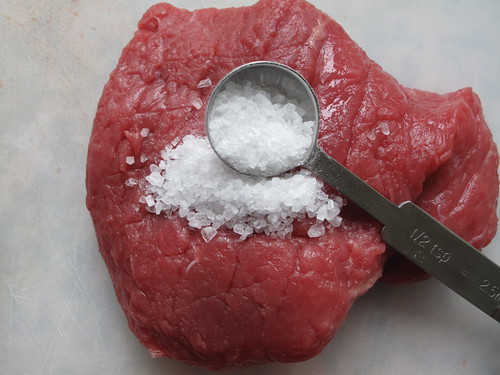 Satisfied that my arithmetic had gone well, I left my meat to rest for a full half hour and then some, all under the assumption that I had a 1″ steak. Mistake #3. 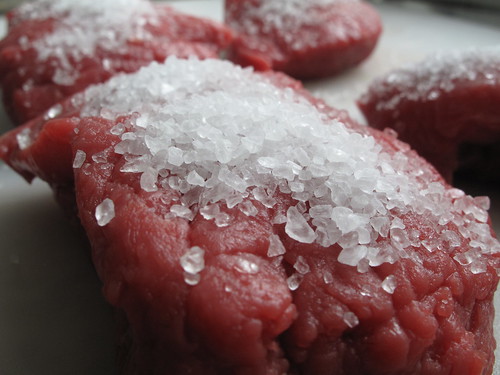 After a few minutes, I noticed that the salt crystals had transformed from ‘quartzitic’ to glassy, kind of like mini ice-cubes….drawing out the moisture from the steak. At this stage, I had no fear of dry, tough meat – I mean cooking it couldn’t get much worse than I had done in the past and so I ploughed on. 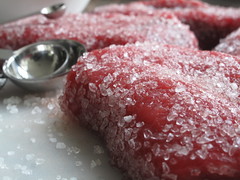 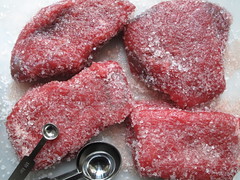 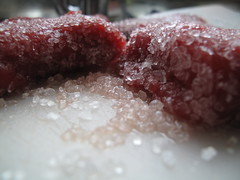 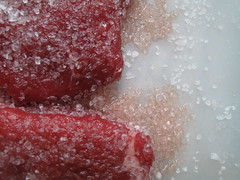 After a good half hour, the steaks remained bejewelled, salted by diamond crystal…swimming in a pool of fresh meat juices. 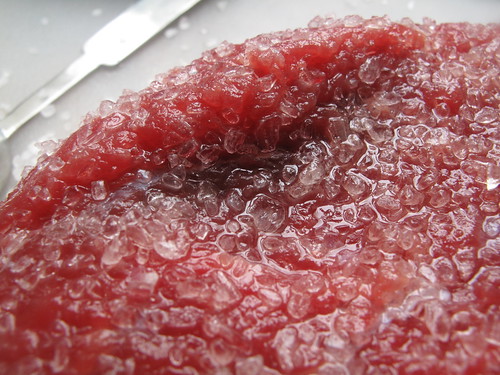 Anyway, while the steak salted, I popped some Uncle Ben’s long grain into the Rice cooker and started prepping the green beans. When I was done topping and tailing them, I cut them into 3 pieces and steamed them in my basket for 4-5 minutes after which I refreshed in cold water and left to drain. But I must remain focussed – focussed on the meat of the matter – our steaks.

I put my grill pan on medium – high heat on the stove-top and then proceeded to rinse the salt off the steaks. 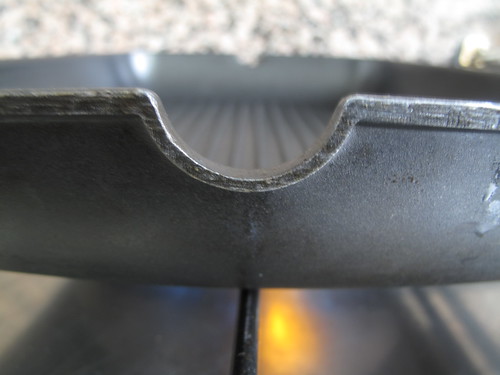 I noticed the texture had changed. The steaks had become a bit firmer to touch. When most of the salt was rinsed off, I dried the steaks with a clean kitchen towel – I wouldn’t use a dirty one – would you? 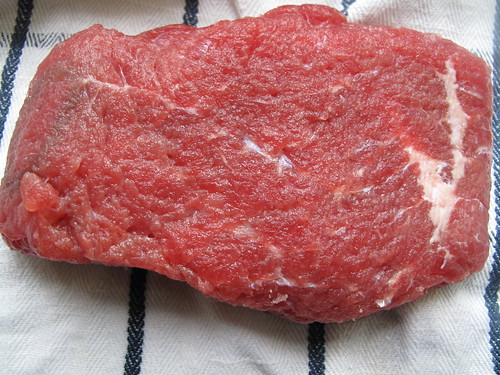 Using my silicone pastry brush, I lightly greased the pan with oil and gently placed my steaks 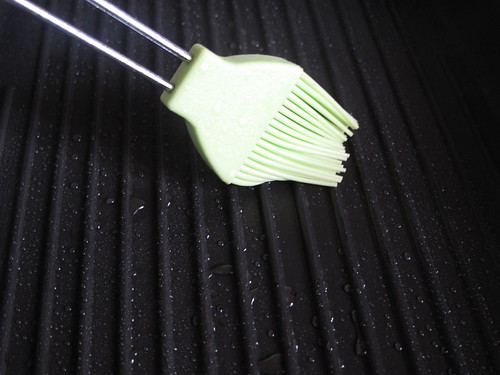 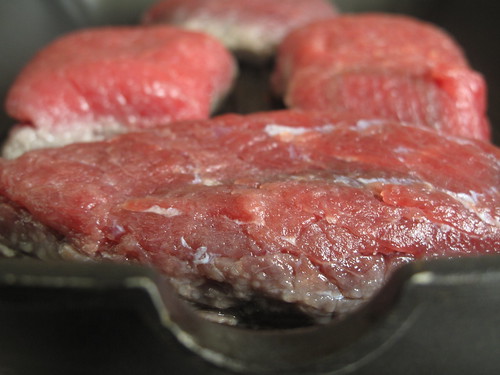 I left them to cook for 3 minutes without touching then and then flipped them over. I let the grill marks form and then I turned down the heat a little and let then cook a further 5 minutes. 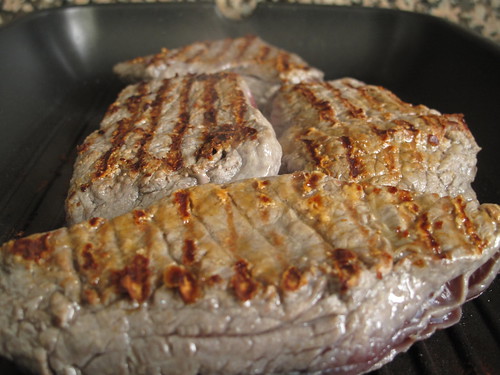 With both sides cooked to my satisfaction and still not haven overcome my lack of passion for bloody meat, I turned the steaks on their sides (edges) and cooked them till they were browned all over. 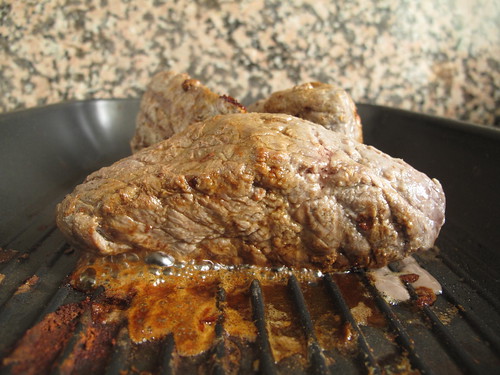 Satisfied with their tan, I brought them out to rest while I assembled dinner together (an hour later than I planned – a bit too many photo opportunities). I quickly tossed the green beans in some butter and lightly seasoned with salt while warming them up. Then I heated up my favourite mustard soup…. for sauce.

Not withstanding, I eventually served it up and shouted the husband down to the dinner table. (I must apologise for the changes in the colour tone – hungry, lost focus and couldn’t start tweaking the light settings….) 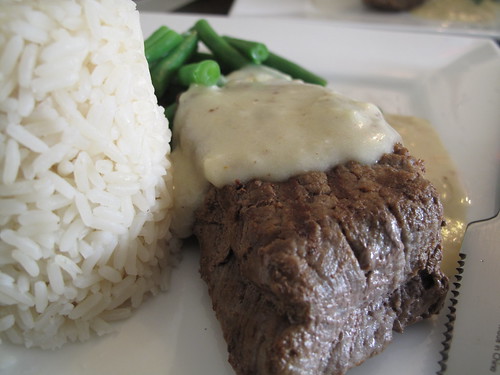 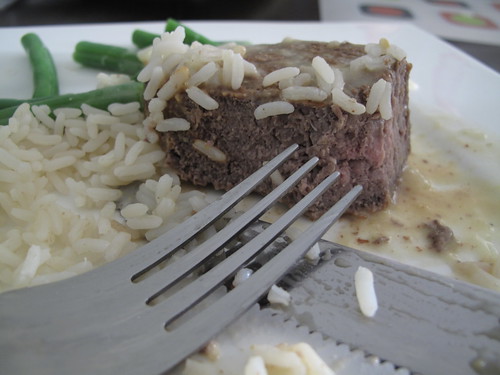 Mistake 1, 2 and 3: I should have have rounded down with my steak measurement, and I should have resisted the plan to stud the steaks with salt and last but not least if I had followed point one, I would have salted for the correct time and not ended up with super-salty beef but …. I’ve learnt my lesson. Poor maths. Inability to stick to recipes (#20 on the list).Using twice the recommended amount – may work with other things….. but it didn’t work with my steak.

With trepidation and fear and excitement all rolled up in one, I watched him take his first bite. HE chewed, he paused and then he raised his hand and said …… it was the best steak he’d ever eaten…. at home! It remained pink on the inside – even though I had over-cooked it a bit. Why? I think the salting process had something to do with it though I know not the exact science… 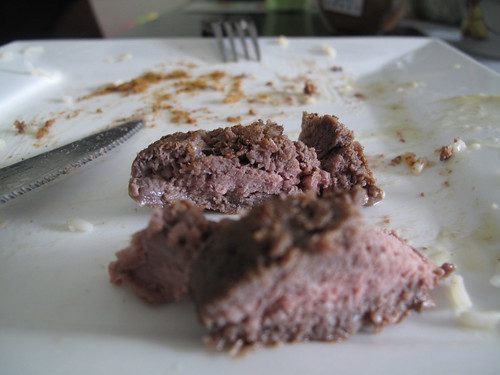 Short of screaming and dancing, I remained cool, calm and collected while I told him the technique of ‘blinging’ up the steak. Though over-salted, it was a world of difference considering where we’re coming from. Oh my darling food critic husband….. well done, you made my day.

Despite the salt, he ended up eating 2 steaks at the speed of light while I slowly and tortuously worked my way through 1. The salt really crippled me, at least it did the walls of my mouth – leaving it numb for almost a full 24 hours. I woke up the next morning with the taste of the sea in my mouth. I think I used up my entire salt quota for the week in one meal….believe me, the next time I make steak, I’ll be sticking to the recipe – exactly, no guarantee though for other delightful recipes…. So watch this space. 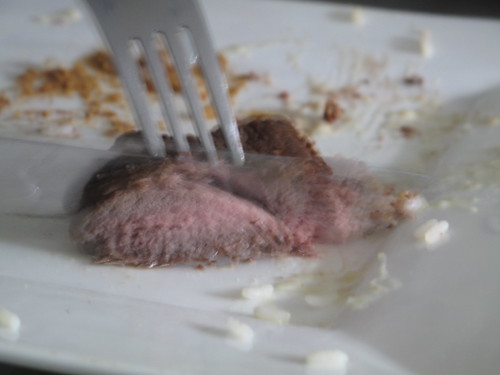 By the way, the salt technique also works for fish in that they end up tasty and well salted through to the core and still remain moist! I tried it over the weekend when I made fish goujons from frozen fillets to go with our salad evening. I’m sure it would work on chicken and other types of meat. If you don’t try, you don’t know right?