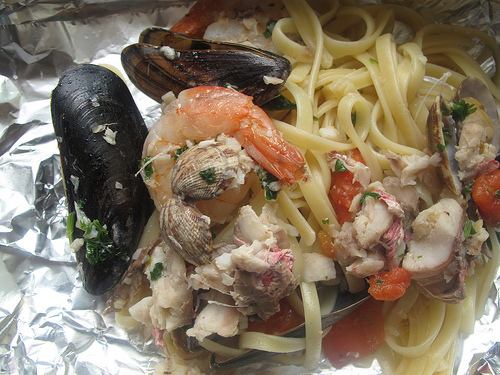 I’m all for paradigm shifts… 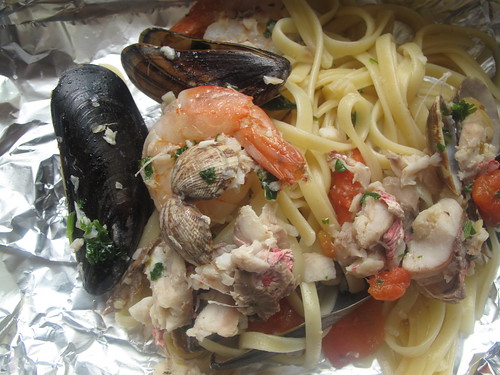 I mean, who says roadside waiters are without honour?

In my opinion, it all depends on what you’re after.

In the past, when I spoke to people about my husband, I tended to describe him more as a Michelin star eater, than chef though that is rapidly changing but more on that another day!

Today we talk about a historic moment and where better to experience such than….in Rome. On this fateful February day, we’d done a daytime tour of the Pantheon and had a night time one arranged. In between, we had gelato at one of Rome’s finest – Giolitti and next on the agenda was dinner. Even though we’d already had dessert! Please don’t let the cute mullets scare you! 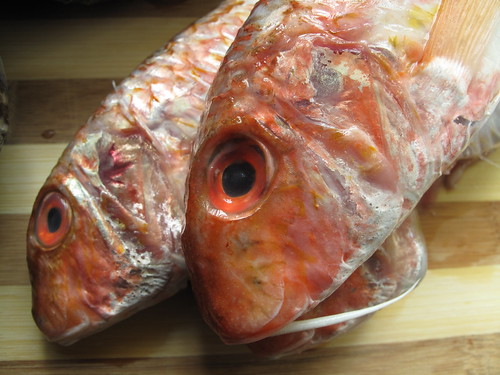 As we made our way back to the Pantheon, the catcalls began. Loads and loads of restaurant waiters were out on the street trying to entice guests with meal offers. By nature I seem to be a fairly suspicious human being but that doesn’t have to be a bad thing does it?

Anyway we sort of got pulled into a restaurant and sat down to dinner. I ordered saltimbocca and my husband went for a ‘seafood meal’. Because it was almost time for our tour, I dashed to the Pantheon to see if we could cancel. I couldn’t find the guide where were supposed to meet up and so hurried back to dinner (it turned out later that the guide got tied up elsewhere, and we have a free city tour the next time we’re in Rome). 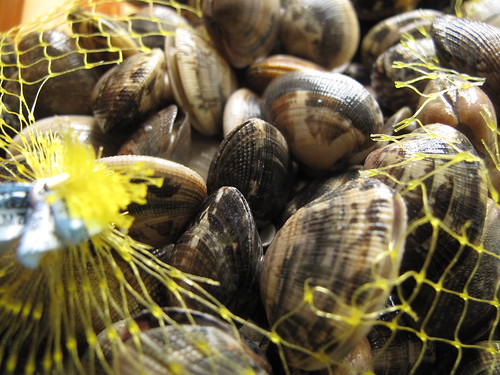 By the time I got back, the meal was ready. I started to eat and it was lovely….till I saw and tasted my husband’s. Delicious seafood with pasta, wrapped and baked in a bag of foil. See why he’s the one wearing the stars? You could tell there were no spices and yet it had the most amazing flavours. EVER. (Mind you, this is not a photo of the famous meal….I wasn’t camera savvy back then!) 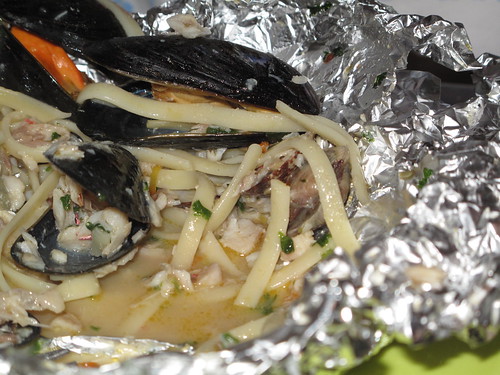 Of course I kept the receipt and looked up line item X called Ling Cartoccio as soon as we got home. A couple of google searches later, I had found some recipes and set out to repeat the feat, and repeat I did.

So what exactly is Ling Cartoccio?

So what  exactly was spectacular about the meal?

To add more pluses, I would say

So…why not try this for Christmas Lunch?

Bin any shellfish which are open before cooking; bin any which remain closed after cooking

Prepare the foil sheets ahead

Fold the parcels directly on the oven tray (if you can) so you don’t have to move them from worktop to tray, risking disaster

Don’t leave the parcels for too long in the oven otherwise the sauce dries up….

Start off by preparing eight (8) A4-sized sheets of foil paper. You’ll need 2 per parcel. Lay these on the oven tray and leave on your counter/table-top.

Wash all the shellfish very well and sort. If any are open already open and don’t shut when lightly tapped on your counter, bin them….rather than risk ill health. If any remain shut after cooking, bin them too! 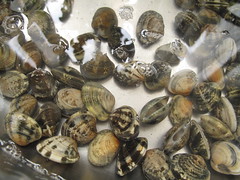 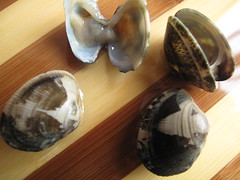 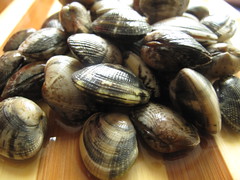 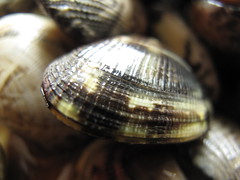 Put the oil in another pan and heat gently. Add the garlic, pepper, and the seafood and cook on low heat  for 5 minutes. Then add the chopped tomatoes, parsley and basil. Leave to simmer on low heat for 15 minutes. 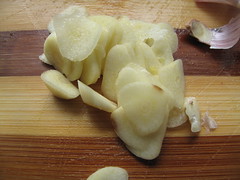 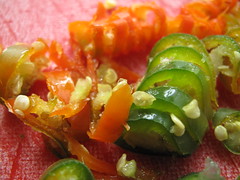 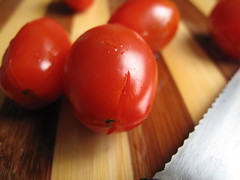 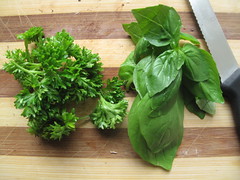 Cook pasta:  Put 2-3 litres (2-3 quarts) of water in a large pot. Salt it lightly and set it to boil.When the water boils add the pasta and let it cook until half done. Drain it in a colander  and transfer it while it is still hot and dripping to the pan with the sauce. Toss the pasta-sauce mixture gently, moving the pan about gently/as you would do if you were flipping an omelette so you don’t flake the fish to bits!  Take off the heat and set aside.

Now, you are ready to make the parcels.

You can make a large one to take the entire pot or make individual packets like I did. Double up 2 foil sheets, shiny side down per parcel.

Place a spoonful of  pasta and seafood in the centre of the foil, and spoon some of the pan’s juices over the top. 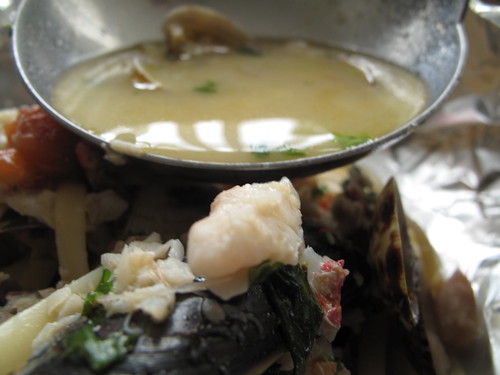 Then fold one side halfway over the pasta. Fold the other end in, overlapping the intial fold. Roll both ends up to make a sealed pouch. 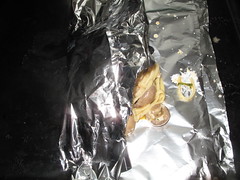 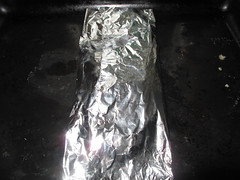 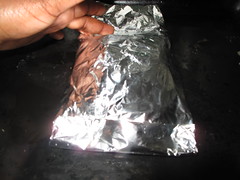 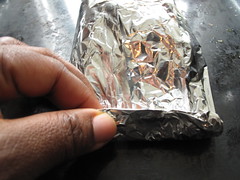 Bake in the oven for 5 minutes, at which point the pouches will have puffed up, though if they haven’t…..its no problem at all, it will still taste super good. 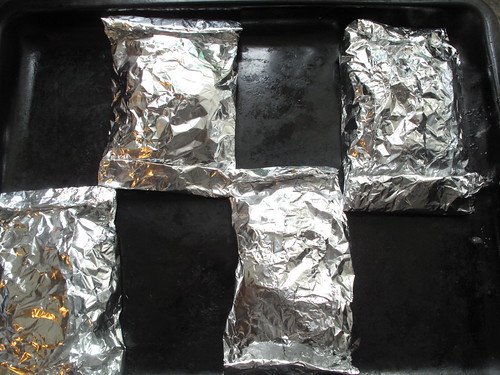 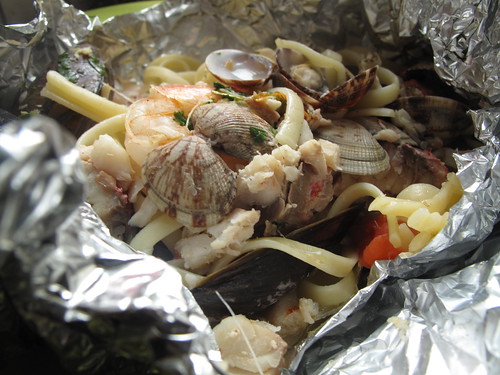 Of course, watch out for bones….. 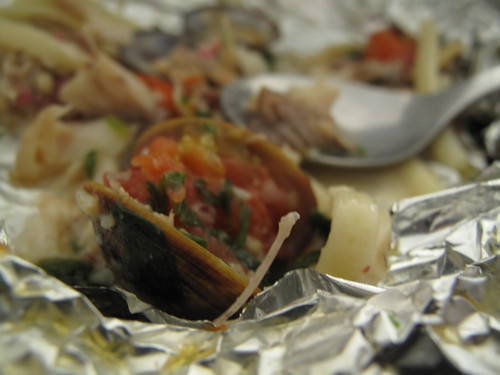 Note that you may need more than just a fork, get a spoon out for assistance please! 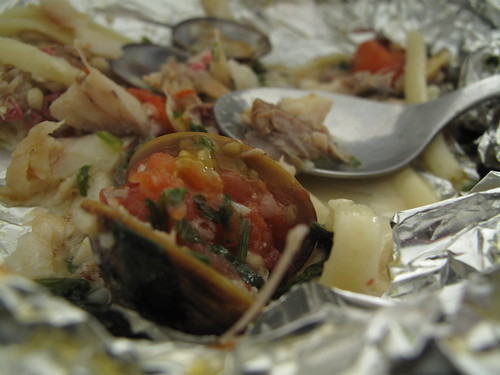 If you’re feeling adventurous, mop up with some bread. 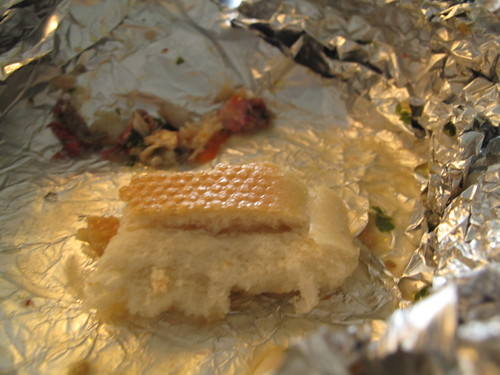 So now, what do you think  about this for a festive occassion? So what if it doesn’t come with ribbons and strings? It is gilt-wrapped…and tastes super too!

This is my contribution to Presto Pasta Nights, hosted this week by Cinnamon Spice & Everything Nice….and 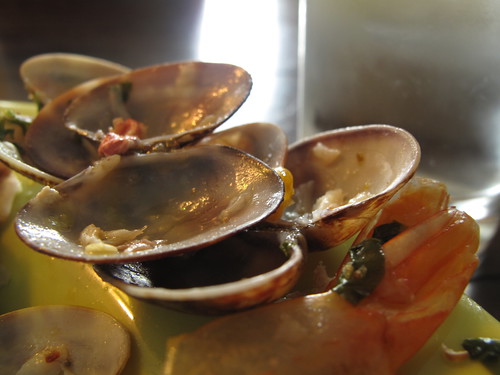 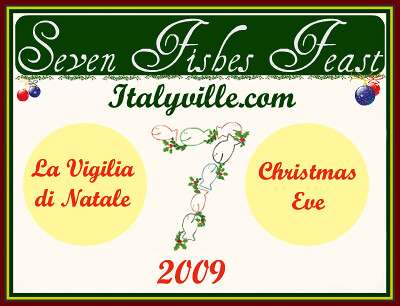 What would you like ‘Al Cartoccio’?And is Christmas Lunch a good time to serve this up or would you rather some other hour of the day?